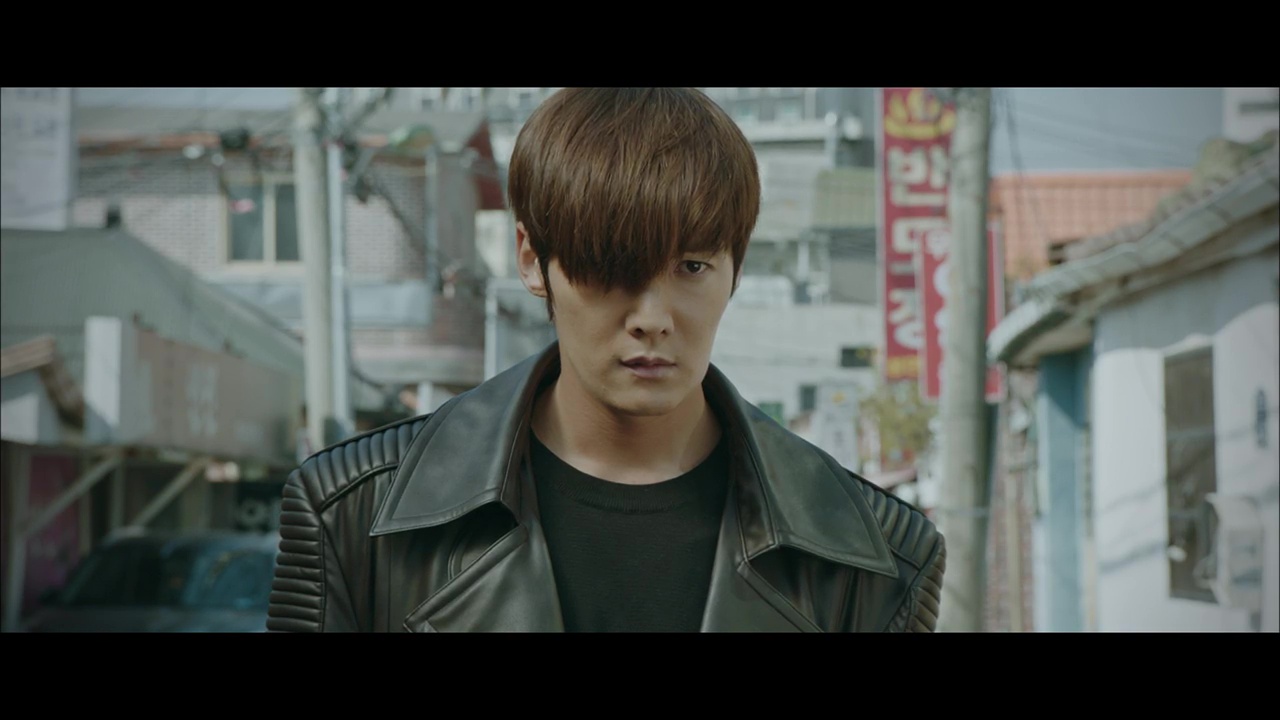 As hinted previously, nothing is as it seems in Rugal. This week, everything our hero believes is turned upside down, and he’s left shaken. Losses are repeated, trust is broken, and mayhem (and a new hairdo) is unleashed. 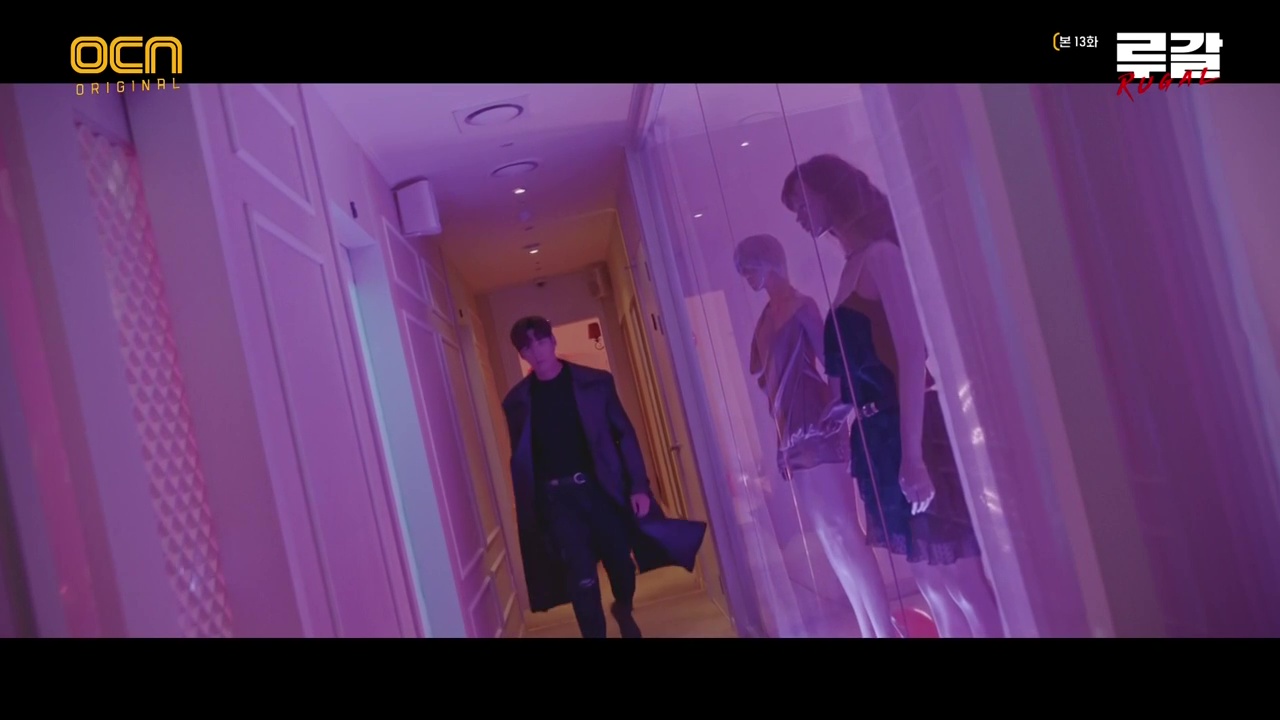 We left off last week with another tense Duk-gu/Ki-bum confrontation and the sense that things were not what they seemed. Duk-gu boasts that he’s planned this whole elaborate reveal for Ki-bum, and wanted to be the one to tell him: his wife is alive. Ki-bum runs off to the seedy joint where she was last located, but she’s nowhere to be found.

It’s a powerful reveal and totally unexpected, since the death of his wife was the start of this whole story. However, this game-changing reveal would have been better with a little less pointless cat-and-mouse. Ki-bum keeps confronting Duk-gu, but we never seem to get anywhere, and when he finally goes AWOL from Rugal, Ki-bum does the same exact thing he’s been doing since day one: chasing down and confronting Duk-gu. Their push-and-pull is mostly about cool car chases and fight scenes, and it takes an entire half of an episode to Ki-bum to be reunited with his wife, which is what we really care about, right? 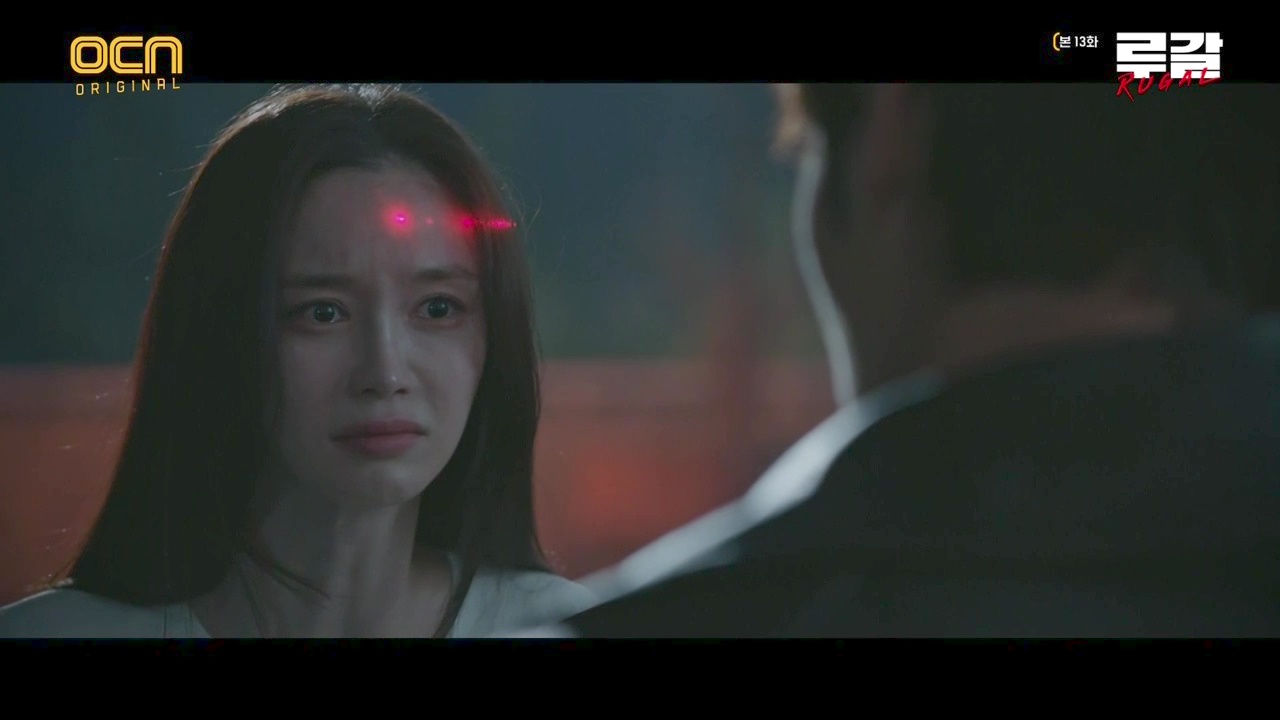 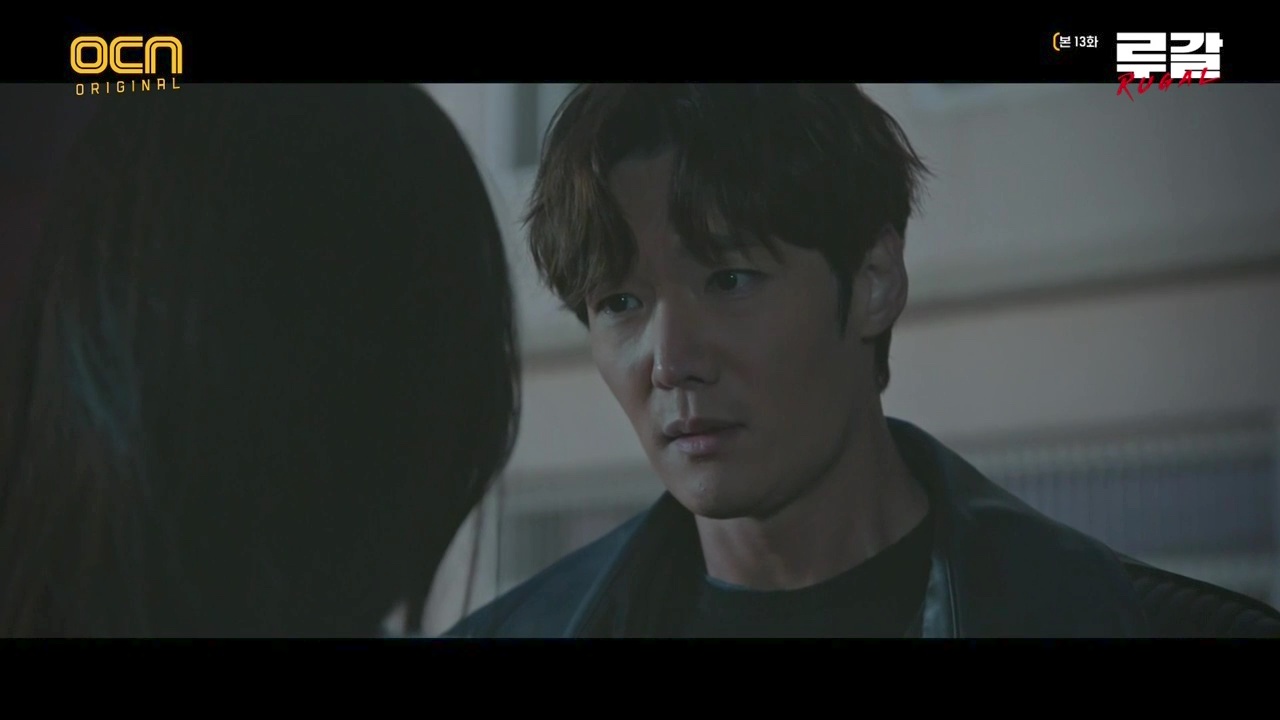 Oh, but it’s so much more complicated than this tender midnight moment. They’re not together more than ten minutes when Duk-gu, piped into his wife’s secret ear set, tells her to kill herself to protect her husband. Which she does…? She runs into a car that’s conveniently barreling down the road and dies. Again. And Ki-bum loses it. Something breaks in him/his eyes, and he passes out. Good thing his Rugal buddies are around to help. 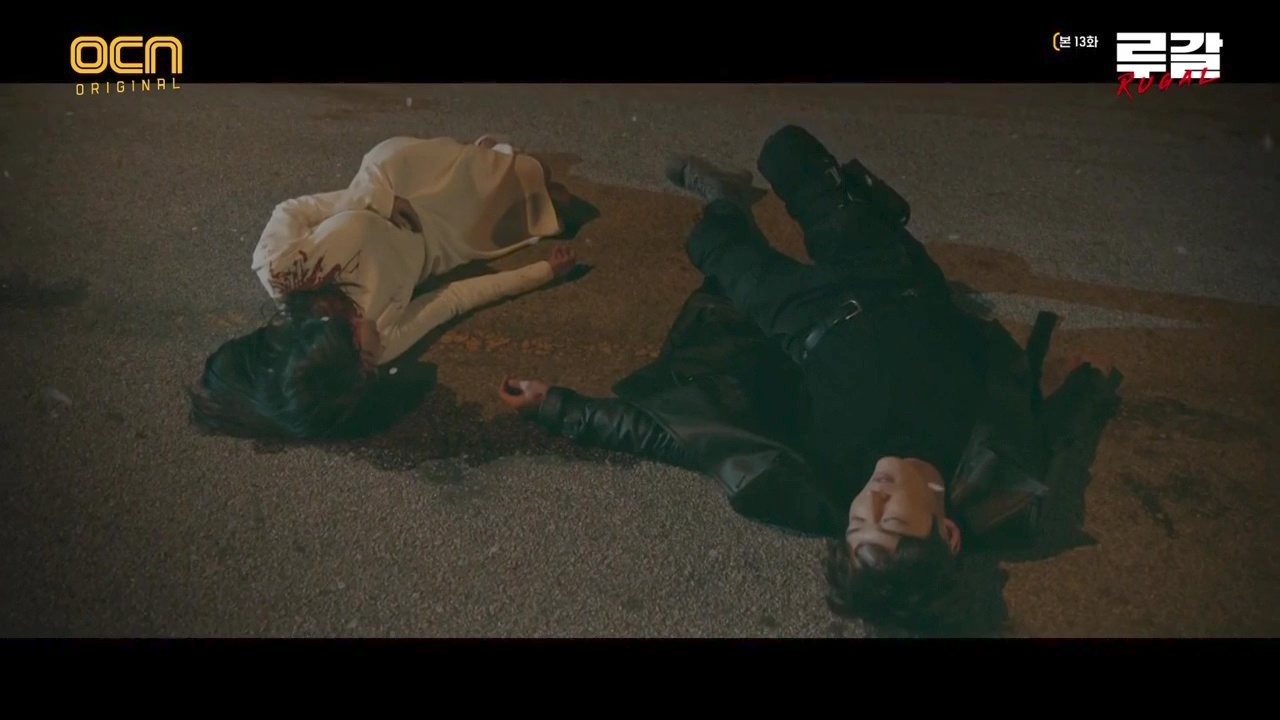 The Rugal crew is in their colored jackets and at the ready to protect Ki-bum, which they do several times, especially Tae-woong. But the three of them soon realize that Director Choi is a little less shocked about Ki-bum’s wife than he should be… what does he know? Well, we’re told with some pretty straight-forward flashbacks.

Director Choi and Detective Yang, his connection at the police station and also Ki-bum’s friend, were trying to protect Ki-bum and his family from Argos. So, rather than let them get slaughtered, they fake slaughter them instead and destroy their entire lives. The bloody multi-stabbed wife is put in suspended animation by Rugal (help, shades of Melting Me Softly!) but then captured and turned into a sex worker by Argos. As for Ki-bum, we know his story. He’s made into a murderer and then into an agent by Rugal. 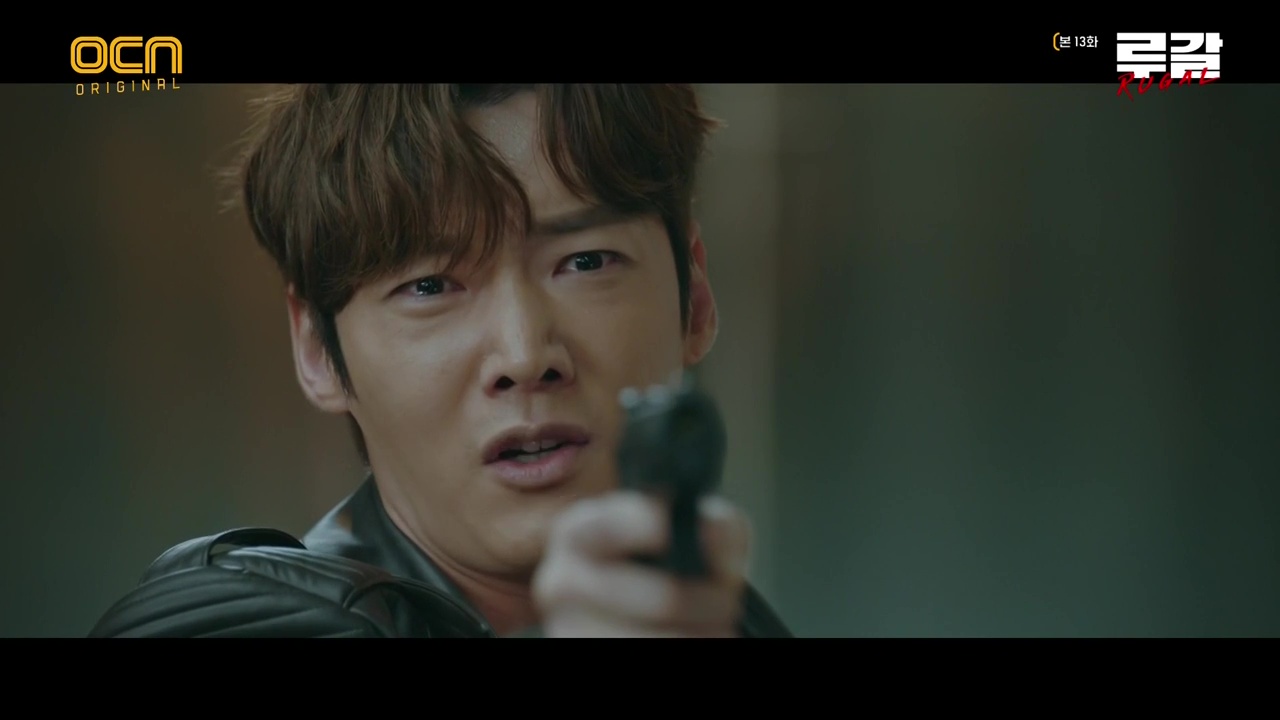 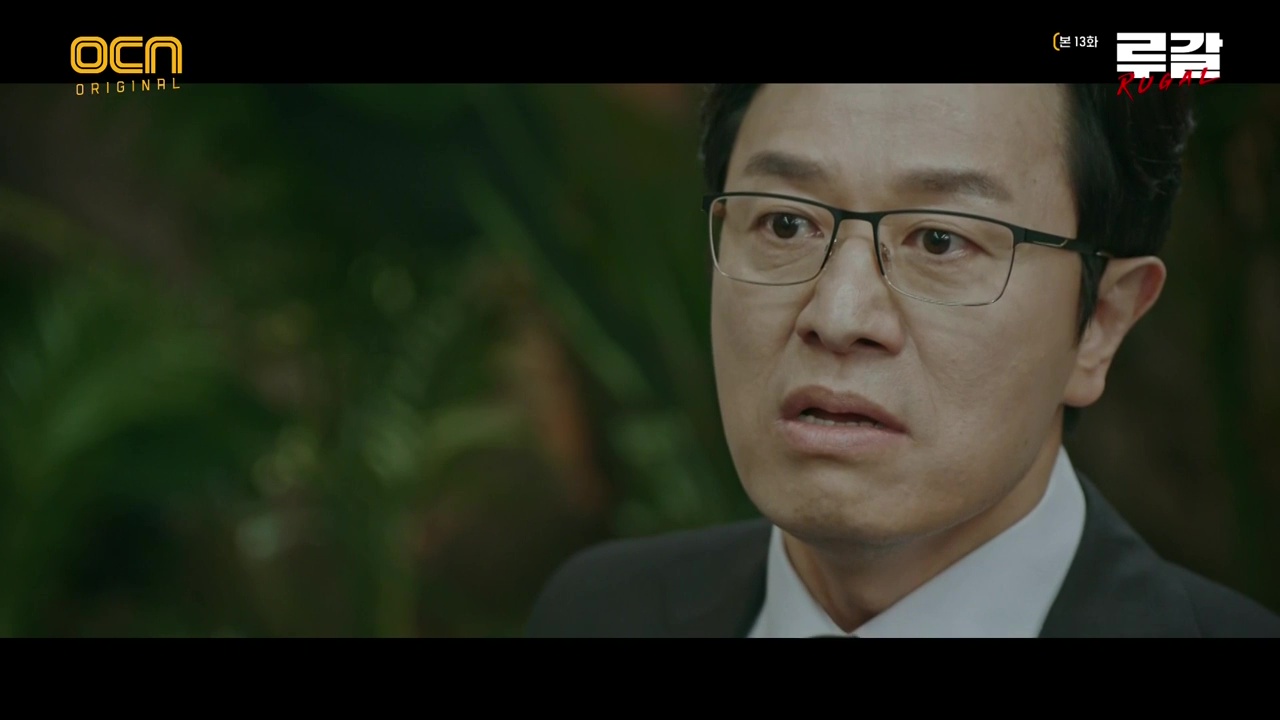 I don’t know how Ki-bum is still standing at this point. His wife has been killed in front of him twice now. Then, to top it off, it takes him about a hot minute to learn (read: overhear) that Director Choi was the one behind the whole fake murder scene that opened the drama. “It was the only way to save you,” says Director Choi — but somehow I doubt that. And of course Ki-bum is furious, and out for blood. Why make him save others when his own wife’s life was at stake? It’s a good question. Probably the best question Ki-bum has asked in this entire show.

Director Choi might have done it for Ki-bum’s good, but he was also thinking about serving himself and Rugal with Ki-bum, his history, and his skills. He also needed a subject for those new bionic eyes… 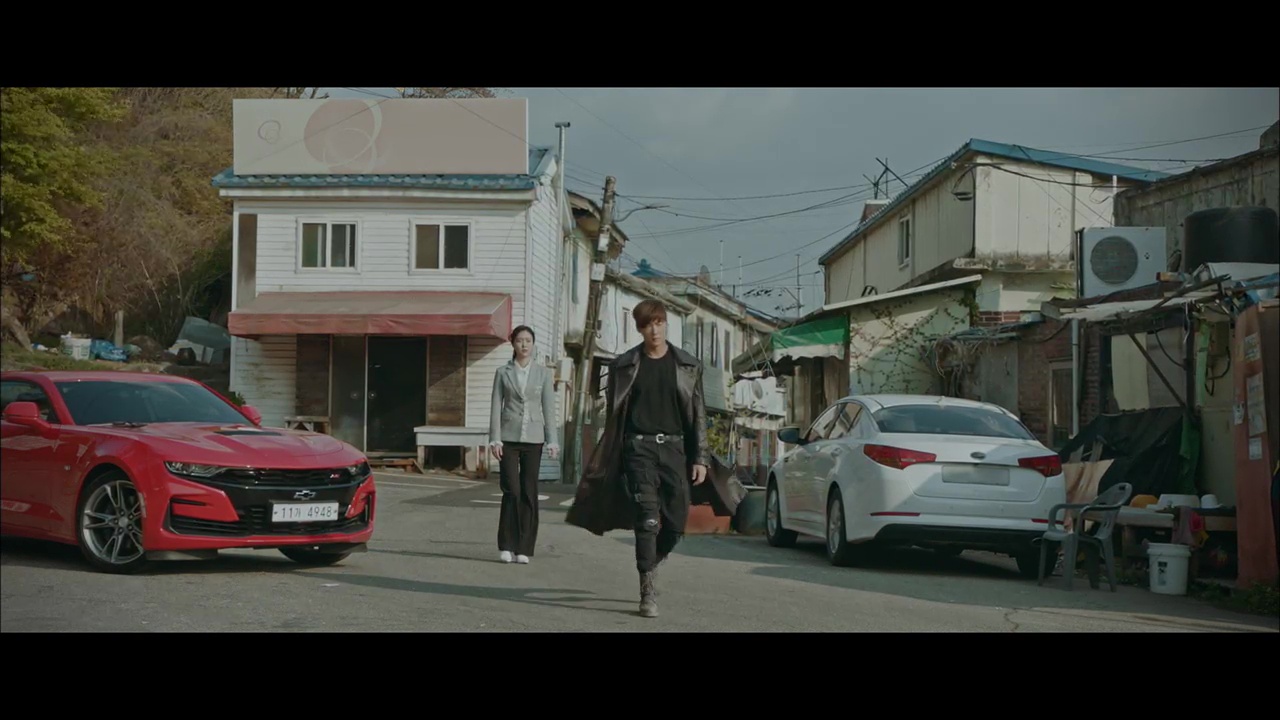 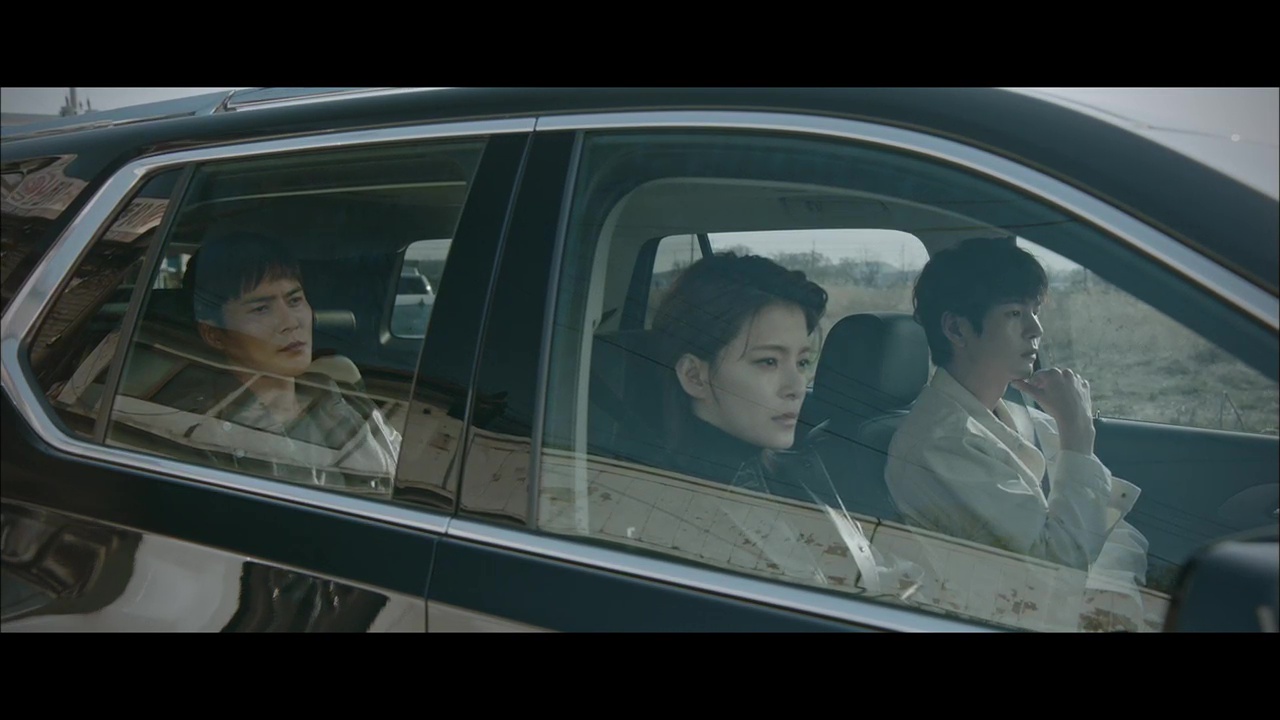 The best part of this whole twisty mess for me was the way it affected our fab four. Rugal has spent its entire length trying to show us the bond between our fighters, and it feels like it was all for this moment. Dear Ki-bum needs help. Will they side with him, or with Director Choi who gave them a purpose and a second lease on life?

Well, a little bit of both. They all want Ki-bum to remain a part of the team and to wipe out Duk-gu together, but each one has to have a stand-off with Ki-bum, too. Because Ki-bum is a little more than a loose canon at this point. He’s also red-eyed (meaning the bad AI is often taking over), determined to get revenge, and sporting a new bad boy haircut. He’s going after Duk-gu, Director Choi, and Detective Yang alike, but the real battle for Ki-bum seems to be inside. And I don’t mean his emotions — I mean those eyeballs. 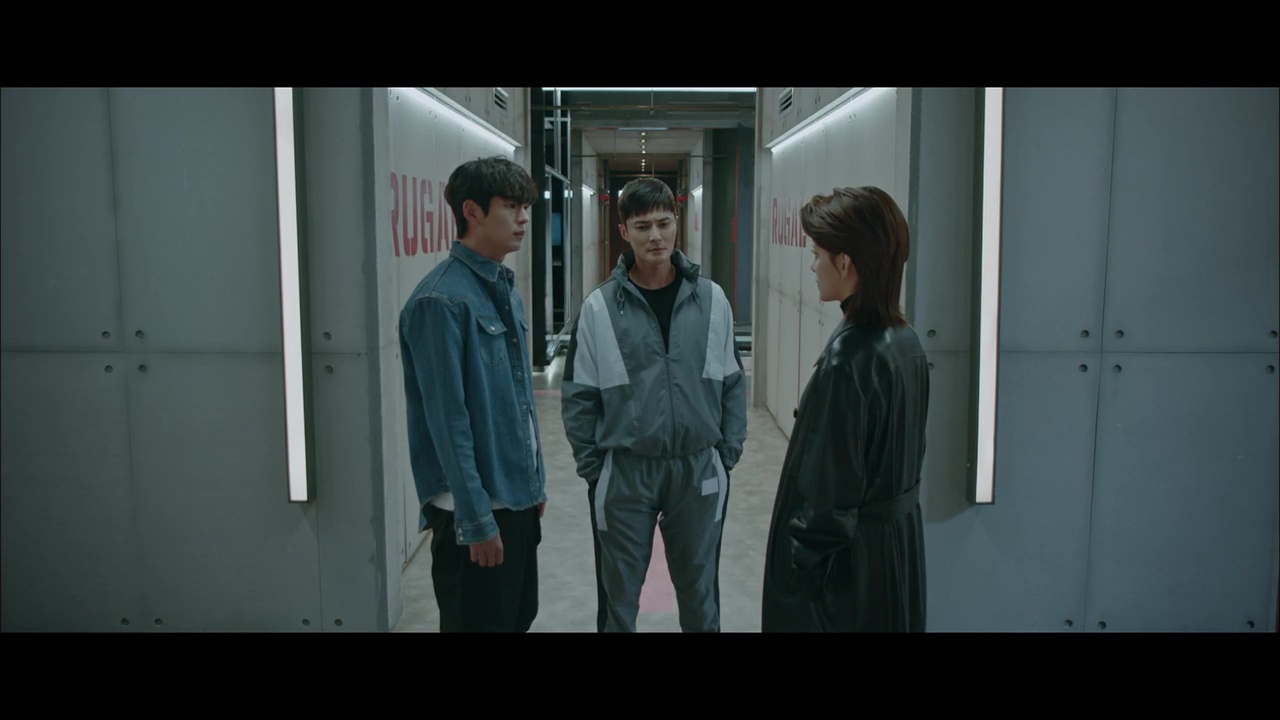 The AI is slowly taking over, and Ki-bum realizes the only way to win, and keep them from controlling him, is to eradicate the chip they’re linked to. He stages a fight with Tae-woong, takes a really hard hit, and then rips the chip out of his own neck. I’m not sure how. Either way without the chip, he conks out, Mina (of the connected chip) also conks out, and Gwang-chul and Tae-woong are left in shock.

What’s going to happen next? It feels like ages ago that I joked that no one stays dead in this show, but boy it was proven true again this week with Ki-bum’s wife. So, ostensibly, Ki-bum can’t be dead either. Whether a reboot or a new chip await him in the future, I’m not sure how Rugal is going to sort out all this sabotage and betrayal with only a week to go. It’s going to take a whole lot more than a dead Duk-gu to make a satisfying ending. 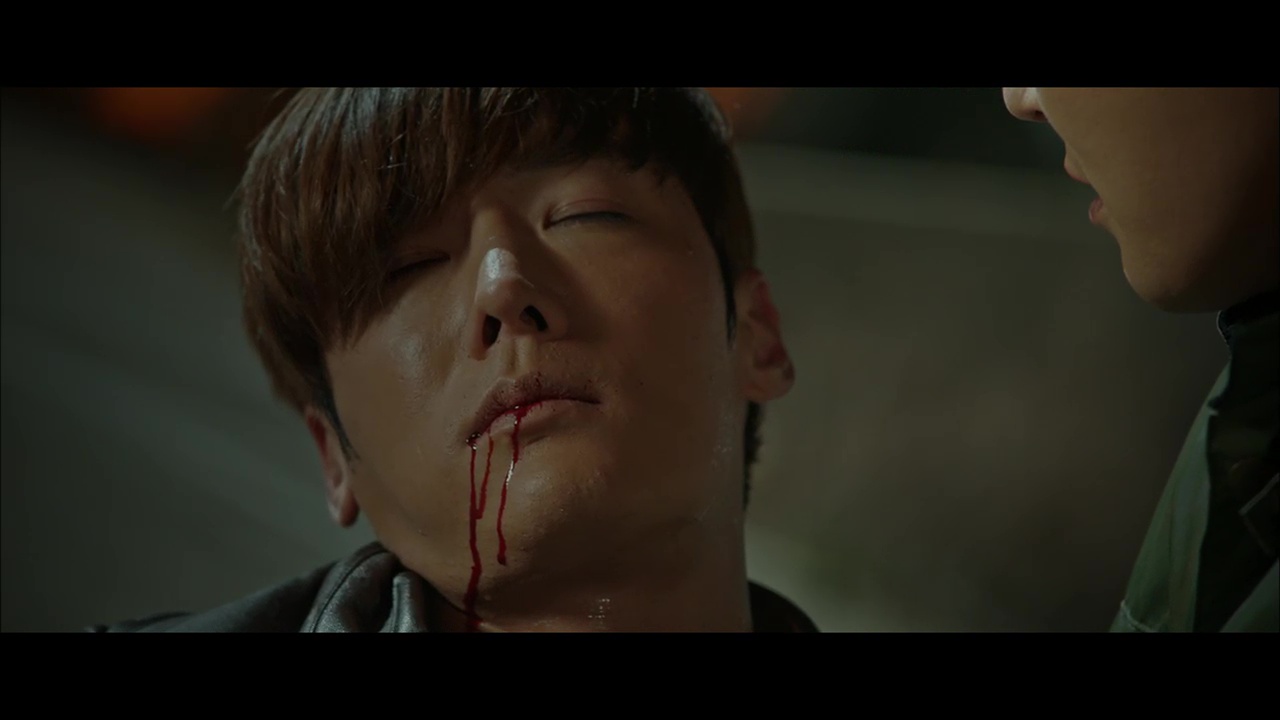 There's something similar in the webtoon, I think, but I do wish we got to this point a few weeks earlier - even one or two.

Thanks again for the weecap, Missvictrix.

This show is like an old 1980's Canon action film mated with a K drama, and I'm finding the results to be both hilarious and visually pretty. It looks like Park Sung-woong is having the time of his life chewing scenery, and I've been having fun watching this since the prison so incompetent a blind guy can just walk out the door.

I got nothing, this recap is hilarious. I almost feel sorry that I can't physically watch this show so you're not so alone in here. I can feel the wind whistling through the empty comments page.

So they "faked" his wife's death and tore his eyes out to "protect" him but then she ended up being forced into prostitution by the Bad Guys anyway - is it weird that makes more sense than what we thought happened originally?

Fighting missvictrix, you're nearly there!

I actually felt really sorry for Ki-bum and what they did to him not to mention the problem with his eyes...

The hair in the first screencap. Lol.

Isn't it uncomfortable covering one eyeball? He should have just shaved his hair bald. Way edgier. This floppy hair makes him look cute.

It was literally blocking HALF OF HIS FACE for the episode. I'm still laughing days later

He should just grow the other half out. Saves wearing a mask. .

It's all for the emo/going rogue vibe. I think there's some smokey guyliner going on too.

I don't get it. Like if you're emoing, wouldn't it make more sense to take a broody shower or get drunk or get mad and punch your hand in the mirror? I would understand if he shaved off his hair and carved a bloody tattoo on his scalp. But he got himself pretty girly hair!!!! Who does that, for crying out loud? @katakwasabi @leetennant

He wanted to channel the emotional trauma of a tsundere lead from 2013?

Giggled through your hilarious weecap @missvictrix. Was equal parts horrified and snickering at the poor wife's demise. How many times can someone die?

Call me one track minded, but I can't help but notice the lack of fancy face masks in the pictures. So, how about this 2-step-theory (1) there wasn't enough leather left to color-coordinate with the new coats and it goes against Rugal rules to break the fashion code by wearing the old black mask. So (2) the new emo-hairdo is the Eyeballs' in-built coping mechanism to grow an alternative out of his hair. As the hair is not bionic (yet), it takes the natural amount of time to grow out and has only reached one eye at this point. Plausible?

I'm thinking the Emo Hair and One Eyeball Tactic is Rugal's most lethal weapon yet.

Oh my my!! I think we almost made it @missvictrix. All this leather and smoldering stares will finally come to a conclusion. I can already see an epic battle between all of Rugal and Duk-gu. But what I am looking forward to is Ki-bum's battle with his AI eyes. Thanks for sticking with it!

😂😂😂😂, this was hilarious despite the serious material. Excellent weecap as always. Very satisfied that I am not watching this.

Why did she kill herself? Out of guilt? Storylines like these are stupid, when characters can just pretty much talk stuff out but they had to make them do something stupid for some forced melodrama. Wasn't sad at all. It's just a real no brainer.