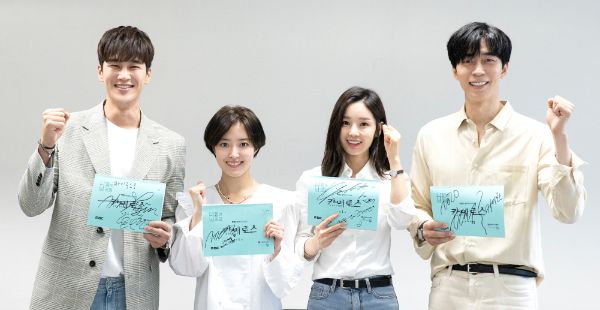 The cast of the upcoming MBC drama Kairos gathered recently for their first script reading. Kairos tells a time-jumping story of two individuals who are adamant about saving their loved ones.

Shin Sung-rok (Vagabond) plays a desperate father whose young daughter has been kidnapped. He was originally a hard-working, successful, and ambitious man. When we meet him, he’s living in a timeline one month after his daughter has been kidnapped. On the other hand, Lee Se-young (Memorist) is living in a timeline one month previous to the disappearance of her beloved mother. In contrast to Shin, she’s had a tough life and a missing mother only adds to her burdens. In an attempt to rescue her mom, she begins a strange pursuit across time.

Director Park Seung-woo (Lookout) began the script read by saying: “90% of production is finished by gathering the right people. I feel reassured because we are starting with good people.” Writer Lee Soo-hyun added: “I am honored to work with such irreplaceable actors. I will do my best.”

Directed by Park Seung-woo and written by Lee Soo-hyun, Kairos is set to air on MBC during the latter half of this year. 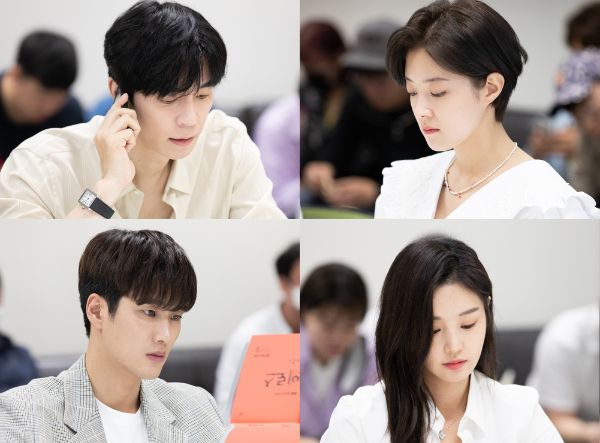 I'm so excited for this!

Another time travel drama. There really must be an agreed upon list of themes each year. I like time travel and Lee Se Young so I'll probably give it a try.

They must have a conference after every New Years. I wonder if they'd let me go & vote.

When I see Shin Sung-rok mentioned I suddenly think of @katakwasabi.

Same!! I was just about to tag them before I saw your comment :D

All right and you! lol

I am so happy Shin Sung-rok is getting leading roles! Good for him!
I am very happy for him!

I am very happy for @katakwasabi! And myself!

Lee Se-young is adorable with short hair!
Anyone who watched Doctor Yo-han will remember how devastatingly terrible her hair was there - it's shocking that some hair extensions could completely take me out of the drama 😂

Was just about to comment on loving the short hair, she looks so fresh!

I like her short hair too! Now I know why she didn't appear in the script read arrival video~ surprise haircut 😆.

When we meet him, he’s living in a timeline one month after his daughter has been kidnapped.

😱! A month after his daughter was kidnapped?! Will I see SSR looking like dishelved hobo?!! Andwaeeeee 😥.

I want him in suits. Most importantly I want to see his forehead in a drama. I can already feel that I will be deprived of cuteness and romance from the drama....don't take away my suits. Give me RH in suits please 😢.

On the other hand...yay RH is returning to dramaland. I have a new drama to look forward too~ 🥳

I thought it was interesting that both leads have almost the same haircut in these photos. It would be good to see the forehead... but I think he only shows his forehead when he plays a villain or misunderstood emperor. ;)

Andwaeeeee~~~ is K-dramas anti forehead or something. Why limit foreheads for villains only 😢☹.

I hope this drama will be different. Give me good guy with no fringe and wears suits please~~~ 💇🏻‍♂️.

I want the Hyuk look back. Bet we'll see him go all Liam Neeson and crazy and scary and go after the kidnappers with that manic look in his eyes...remember the leather jacket, guns blazing scene in TLE?

Yes. Give me that style again! Hotness needs to return to our screens YY!!! Aaaaaa~~~ 🔥

Yes, kat, yes! Hotness and a Real Man! Sneering and snarling and ready to kickas*!!!!! And instant coffee PPL! Lots of them! Remember that scene Hyuk dragged himself to shore, soaked to the skin, dripping wet and everybody was gawking, and he spat, with burning eyes, "Get me a coffee!" HAHAHAHA

Hahhahha I logged in to spazz about the updates and saw your tag!
Wohoooo! Can't wait!

Not terribly excited to watch this because of Nam Gyu Ri, but on the other hand, would love to watch it because of Ahn Bo Hyun. I'm disappointed though that he is yet another second lead, and not a main!

I think Nam Gyu Ri has been improving. Her acting in Children of Nobody was good. Maybe dark roles suit her more than the usual sweet ones that she gets

I am so intriqued by the plot. I am not a fan of time travel dramas, especially a particular one that had a strange man ride up on a white horse, but this...I am gripped. I saw a movie once, "Frequency", starring Christian Bale and Dennis Quaid, where a woman is murdered by a psychopath, and both men ----- the son in the present, and the husband in the past ------ somehow, manage to communicate with each other from different timelines through an old radio in the barn, and try desperately to save the woman. The plot sounds so similar to that movie's, they race against time to avert the tragedy. But, every time they change something in the past, it impacts the present...like Timeless the TV series. So the more they change the past, the more different and unrecognizable the present becomes.

But the real draw for me is Kang Seungyoon! The boy is returning to dramaland after his short but real impressive stint in Prison Playbook and I am so excited as to what he has in store for us! I also love the fact that unlike most other idol actors, he refused to take lead roles in big projects because he wanted to learn the craft better before taking on more demanding roles. Gotta appreciate a man who knows what he lacks and works hard to improve. Also, can't wit to hear the OST that he would sing (I mean I hope there is an OST by 6 time winner of KOMS, otherwise that's an opportunity lost lol)

Am watching Heartless City rn, and was wondering about Nam Gyuri. She's still working (and she has been in second leads for ever), she has this plastic look to her that kinda feels a bit off whenever she's on screen but thats my bias. Anywho, time travel needs to be logically thought out and the only ones that used it well were Nine and Signal.

Hi! Nam Gyuri was the one reason I could not even finish Heartless City. Like you said something about her face, but I think it is the eyes. However, it is her acting in that drama that was the final straw for me to not finish the drama. It could be she was miscast?

Back at ya! She was definitely the weakest link by far acting wise in that show. However, she does gel to you as the show progresses, because the show does a great job stringing in the emotions.

I do think that they did give her enough to do in her range, that I came along with it. That being said, she did cry a lot but she didn't really express that in her face (like a lot of actresses who want to look pretty when crying types rme). Could also be one of the main reasons why other than Heartless City, she's only been offered second lead roles.

The actress who played the mob woman was a boss, so cool and badass. She's now married and with child to Jung Woo!

On the show: Its very good, aged very well too. I think if your a fan of Jung Kyung Ho, I would def. stick with it. But its a grim outlook on society/life.