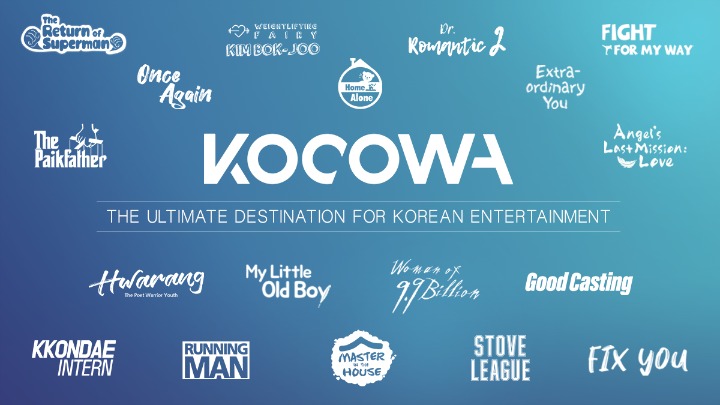 KOCOWA is celebrating its 3rd Anniversary!

Many of our North and South America-based Beanies are probably already familiar with KOCOWA, as it’s the biggest Korean entertainment streaming platform across the Americas. In just three years since KCP launched KOCOWA’s subscription streaming service, it’s become known for the many, many, popular Korean TV shows that it has available on-demand in the Americas.

With over ten thousand hours of programming and new episodes uploaded daily, KOCOWA has the largest library of Korean TV (from new shows like Tale of Nokdu, Stove League, to classics like Coffee Prince).

The ever-growing KOCOWA content library gets new titles each month, and July saw several new K-drama join the fold, with CHIP-IN (a.k.a. United Effort to Accomplish One Thing), Into The Ring (a.k.a. Memorials) just two of the many additions. Coming up in August, KOCOWA will be streaming the anthology series, SF8 . Each episode will revolve around technology, the supernatural, or sci-fi themes. Lee Yoo-young, Choi Shi-won, and Uee are just a few of the names attached.

Thankfully for all of us who aren’t fluent in Korean, not only are programs uploaded within 6 hours of their original airtime in Korea, they also always come with multi-language subtitles.

“The last three years have shown us that there is a strong demand for Korean television outside of the Korean community,” said KCP CEO, KunHee Park. “KOCOWA will continue to meet the growing international need for Korean dramas, reality shows, and K-pop.”

About KCP and KOCOWA
The Korea Content Platform, Inc. (KCP) is a joint venture between the top three television broadcasters in Korea (KBS, MBC, and SBS). KCP launched KOCOWA, a leading subscription video on demand (SVOD) streaming service to the Americas, and with the biggest audiences in the United States, Canada, and Brazil. KOCOWA provides the most robust lineup of Korean dramaa, reality, and K-pop content in multi-languages and on multiple devices. For more information visit www.kcpglob.com and KOCOWA

Wow, I’ve been spending that much money on kdrama for three years now? Huh, time flies.

Now if only they'd get their butts into gear and license this platform for the rest of us (Australia please!) I too could spend all of my time watching K-drama's, instead of praying that Netflix here in Aus picks up my faves :/

Thank you bringing in my favorite variety shows every week.

I still miss DramaFever though 🥺

Many people miss Dramafever- a platform needlessly killed off by a big conglomerate who does not appear to have derived much benefit from it.

It's called "Karma" or "What goes around comes around" or “As you sow, so shall you reap.” Let us not forget how unrelenting Dramafever was and the legal pressure tactics employed when they went after the fansubbing community. Its well known and documented that the company would request that a fansubbing group or underground site allow their subtitles to be put on Dramafever's site in order to avoid a copyright takedown notice or cease-and-desist letter. The aftereffects of Dramafever eliminating competition to monopolize and commercialize kdrama distribution remain keenly felt even today. Nowadays, there's less access to fully subtitled and translated video content work done by fansubbers/volunteers. And even when viewing on the paid subscription services platforms, sometimes an accurate and faithful translation of the original content is skipped over or barely subbed at all. Sad to say, a lasting impact unfortunately on the ability of fans around the world to enjoy full access to content (especially much talked about older kdramas and sagueks).

Yours is a fair point. Unfortunately it does not help those of us who want access to Kdramas (and T-dramas, J-dramas and even such C-dramas as are worth watching) on a legal site.

Whenever this is available in Europe I will congratulate them.
Great for all those who can enjoy it!

I wonder how many people subscribe and the demographics of their subscription base? any idea?

I just recently cancelled my subscription to KOCOWA because I don't really care much for variety shows and I really, really am not a kpop fan. I don't too often rewatch shows I've already seen. The new kdramas that come out that I am interested in watching don't seem to get picked up very often by KOCOWA It's been maybe 6-8 weeks since anything new has shown up there that I've wanted to watch. Believe me I would love it if there were plenty of new dramas here to watch, but there just aren't, at least not that I am interested in watching. I will be happy to resubscribe if more kdramas show up.

It seems like they don’t have a lot of new dramas like they used to. Not sure if Covid has something to do with it.

I suppose that might be a possibility. But there are still new kdramas out there that I hunt for and almost never are they on KOCOWA. It does seem like there was a time when more were available. But it seems the person they have in charge of shows seems to have a thing for kpop and former kpop "idols" who are trying to be actors. (like L who I really dislike). Or maybe it's just that I want DramaFever back and it will never be back. Kocowa is like getting a new dog after the old one you loved has died and you just can't quite get over the fact that the old one is gone. That could be my problem and Kocowa might be doing a fine job.

I feel you 🥺
The shutdown of DramaFever felt like getting dumped without any closures for me. Like a breakup that you never saw coming. It left a void that Viki, Kocawa and Netflix can never fill for me. 😭

KOCOWA has been getting fewer k-dramas recently. I don't know how much of it has to do with luring kpop fans. KOCOWA was supposed to get all of MBC/SBS/KBS dramas but other platforms like Netflix and now iQIYI have gotten licenses to quite a few. The highest bidder wins out, I guess. Plus, the Big 3 have cut some time slots or don't air dramas back to back any more.

That makes me sad. Still more reason to miss DramaFever. I broke down and subscribed to Netflix, but I don't know much about iQIYI. What's that one like? Is it worth investigating?

I don't know much about iQIYI. It's a Chinese site with Chinese content but they licensed Backstreet Rookie and Dinner Mates.

It was iQIYI for instance that got the just completed BACKSTREET ROOKIE- which otherwise would have been a KOCOWA show as it was broadcast by one of the Big Three. I would not mind this so much except that I cannot get iQIYI through ROKU. Which is a shame because my wife would have loved it. As it is it became the most popular show on iQIYI- which has some good shows.

And Netflix has also gotten some of these shows as well.

iQIYI is a Chinese site with mostly Chinese shows- and the major drawback that I cannot link it to my ROKU stick. There is also OnDemand Korea as another legal site- that is where I watched PEGASUS MARKET. However, their other new content was not that interesting to me- or was available on Viki- so I dropped my subscription afterwards. Still, the main point I make here is that Adam Smith's "hidden hand" of the marketplace is moving to fill the void- it is just taking some time.

Quite awhile back Hulu used to be available for free. I don't remember if competition came next or if Hulu started to charge for subscriptions but then it seemed the marketplace was flooded with others and the giant Netflix rose up to swallow everything in it's path. The kdrama's are now scattered all over the place and it's hard to be able to find one place where a kdrama addict can get their fix. I still long for Dramafever. But being educated in the arts and not so much business @oldawyer I had to look up Adam Smith's hidden hand to understand your comment. :-)

Same here. I dropped my sub about 2 months ago. Beside there being almost no new dramas, I have zero interest in variety shows and can only take k-pop in small doses. Also it seems like a lot of the shows are not subbed or are very slow. I currently subscribe to On Demand Korea and Viki - but will probably be dropping On Demand as it has the same problem as Kocowa. I will probably end up with nothing but Viki and NetFlix.

I liked Viki more when it wasn't with kocowa. But wtv, what we're gonna do about it? Nothing, it's done.
Something that I can't understand is the amount of old dramas that seem to not be available anywhere (not even vpn works). Jeez. Some dramas I really want to see them with the timed comments, but since I live somewhere in andromeda I can't.