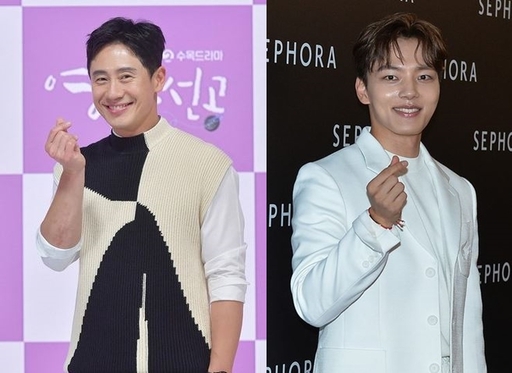 A new JTBC drama has been lined up, called Monster, and casting has been confirmed for actors Shin Ha-kyun (Soul Repairer) and Yeo Jin-gu (Hotel del Luna).

The story is a psychological suspense about two police officers determined to hunt down a serial killer, even if it means using unconventional methods. Through their journey, the drama explores different facets of human character and will continue to question who the true monster is. Whether it’s you, me, or all of us.

Shin Ha-kyun takes on the role of Sergeant Lee Dong-shik. In his police detective days, he had once worked fearlessly in the violent crimes division. But his life has been peaceful since being re-deployed to a quiet station in the countryside and he keeps busy by helping with all sorts of odd jobs.

Everything changes, though, when a new officer is appointed to the Shin Ha-kyun’s station: Yeo Jin-gu’s character, Detective Han Joo-won. Yeo turns out to be Shin’s new partner and, complicating matters, Yeo is higher in rank owing to an affluent family. Yeo’s arrival also triggers the resurfacing of an old serial murder case from 20 years ago. The once quiet little village becomes overturned in fear.

Written by Kim Soo-jin (Mad Dog) and directed by PD Shim Na-yeon (A Moment at Eighteen), JTBC drama Monster is currently being planned to air in the early half of 2021.

Oooo...interesting. Love Mad Dog drama but never watch PD-nim work before. And YJG always have a nice reserve spot for me 🙈

Yep, will always have a spot for Jin-gu and Shin Ha-kyun is fantastic.

I'm glad this is not a movie. "Hwayi: A Monster Boy" was hard to watch.

Another pair of mismatched partners who (presumably) find a way to work together, despite class and personality differences, to track down a serial killer. I just need to remind myself that I have eaten hundreds (thousands?) of hamburgers over a lifetime yet I can still whole-heartedly enjoy an In n' Out Double-Double...

I liked Mad Dog and loved A moment at eighteen, however the story unless done well will be meh. That being said I am enjoying the heck out of both The Good Detective and Flower of Evil, plus I watch police procedurals all the time, so who knows. Also I am waiting on news of Vincenzo DB, I need that particular laugh.

Apropos of my earlier comment and yours, I recently read CBS is bringing back the CSI mothership for a limited series. Police procedurals never die, they just update wardrobe and tech...On the other hand, with respect to casting SHK, I am much more forgiving of unorthodox cop stories than I am for shows about maverick shrinks and doctors, sooo...

I loved A Moment at Eighteen too.
Vincenzo! I'm sooo looking forward to it.
Now it has been pushed back until next year (It was supposed to be the end of this year...)
But I read the news yesterday that Song Joong-ki confirmed and the cast had a read-through on 8/9.
I want another Good Manager and The Fiery Priest!

I'm looking forward to it too, because the premise is so absurd, but I am always down for Song Joong Ki.😍

I want another Good Manager and Fiery Priest too 😭😭. Those were dramas I didn't think I'd like but they were awesome.

LMAO at Vincenzo news. I'll be laughing with you.

Yayyy another cop serial killer drama I can watch! Why is it that even though these plots are sometimes as cookie cutter as rom-coms, I still love them so much??

this has been a year of cops for me. there seem to be no interesting romcoms in sight (hong sisters, when are you coming back?). Plus, once you get a taste of the thrill, the giddy kissing scenes just dont make my heart throb anymore.

I hate all these serial killer storylines, too! I love Yeo JinGoo but I think I'll have to pass this one....

It's me or they're giving the answer of "who is the real monster" in the synopsis?

If I didn't like Shin Ha-kyun's last drama, I think he was good as negociator in Pied Piper. Yeo Jin Gu is really good in darker role like in Crowned Clown.

Two police officers and old serial murder case.
Sounds like Flower of Evil and The Good Detective...
Do we need another serial killer stuff?

I'm not sure about Shin Ha-kyun but I looooove Yeo Jin-gu. I'll definitely check it out.

Despite the plethora of cop/serial killer dramas, I still enjoy them. The writer and PD combo is pretty good, but I'm not a fan of either actor. Still, I'll probably give it a try.

I’m really looking forward to this. Selfish entitled elite detective is something new for Jingoo. His characters have been too good for too long. Give me something grayish, or even completely bad.

Mad Dog seemed good at the beginning. I just couldn’t finish because I didn’t feel for the cast. This time I like the both leads for starters.

I am watching and enjoying JTBC’s THE GOOD DETECTIVE which has a young(ish), wealthy detective with a higher rank (iirc) (Jang Seung-jo age 38 in rl) partnered with an older detective (Son Hyun-joo age 55 in rl). I believe their characters reflect their actual age. Maybe SJS is playing someone a bit younger. They are not chasing a serial killer.

Now here in JTBC’s upcoming drama MONSTER we will have a very young, wealthy detective with a higher rank (Yeo Jin-goo age 23 in rl on 13 Aug. Happy birthday YJG!) partnered with an older detective (Shin Ha-kyun age 46 in rl). Granted we don’t know what ages both characters will be playing. However we have a 23 age gap In rl here.
What kind of police experience can YJG’s character have? Did he even complete his military service?
Crime is my favorite drama. I am enjoying three crime dramas right now, TGD, TRAIN and FLOWER OF EVIL.
I loved MAD DOG and thought YJG was outstanding in THE CROWNED CLOWN.
I will wait for more information on this.

TGD followup. In episode 12 Jang Seung-jo's character is identified as being 34 years old (4 years younger than in rl).
(For JSJ does look closer to 30 than 40.)

YJG will be SHK's boss so bring on your suspension of disbelief caps with you when you watch this.

I have this amusing issue in that I love Jingoo as an actor but haven't liked any of the dramas I've seen him as lead in. (And like is a euphemism). So, due to this seemingly cursed relationship we have, will I like this drama?
The premise sounds overdone, but it will depend on the execution, plus I think it could be a good role for YJG (still holding out on my Villain Jingoo role though).
And I liked Mad Dog and [email protected] well enough butnotthelightinyoureyesbutshhh.
So we'll give this a shot at least.

Ohh interesting! Thanks for letting me know and for clarifying. I was a bit surprised by that dual credit.

I mostly go off MDL as it seems (?) to be the most accurate of English sites, but I guess not for everything lol.

Hi! Same here with Jin Goo, the only role I ever liked from him was in a movie Hwayi : A monster boy (Which was where I discovered him). After that, nothing much in his later career stood out for me , maybe Circle or when he was in Crowned Clown as the role of a king. But that is about it, Recently this how I feel toward Yeo Jin Goo acting or more specifically his acting career. It seems to me and I could be wrong but whenever he is given the role of playing just a nice guy he always comes across as unbelievably boring.
And I don’t have problems with characters that are just good people , but the fact is that some actors are able to add depth, and complexity to a character that on paper seems to be too much of a good person. And I have yet to see Yeo Jin Goo do just that.

Yeah this is why I want to see him play a villain hahaha.
I thought he was phenomenal as the King in The Crowned Clown, but he wasn't nearly as compelling as the Clown, (however the heck that works) and I despise the show outside of YJG as Yi Heon. (I also think the show wasted his talent and the King's character but that's another story; let's not get into TCC rants on here *ahem*)
To be fair to him, he didn't have the best scripts for Circle or HdlL; I thought one of Circle's weakest points was its character writing, and the Hong's didn't even bother writing Chan Seong as anything in HdlL, so even though I could tell he was acting his heart out in both (and in HDLL doing all the work for a otherwise empty character), something was missing for me.
I also don't like him in heavily romantic roles- I don't know whether it's the directing or the writing or just him or what, but I don't think they suit him.
I keep watching him though because I think he's not just good but EXCELLENT in roles that suit him.

We're in the same boat. I really like YJG the actor, but I haven't liked a single YJG drama since Circle

Okay so I couldn't finish Mad Dog and I haven't seen Moment at Eighteen but I'm just sooo excited to have Jin Goo back in dramaland \^^/
I haven't seen any Shin Ha Kyun dramas so I don't know what to expect but I'm so glad to see Jin Goo in a gray role. I want to see some bad guy Jin Goo, maybe his acting would be so good I'd start to hate him (highly unlikely). I'm really into crime dramas now so I'm glad one of my faves is doing one. Flower of Evil really has me excited for bad guy leads. Go Joon Gi Hyung!!

The plot doesn't really offer anything new but I'm totally up for the collaboration of these two fantastic actors. I'll watch anything Yeo Jin Goo's so I can only hope that the script will be written and handled really well.

Is this gonna be the drama that allows me to watch YJG again? I have honestly been uninterested since Circle

I didn't watch Mad Dog, so idk what to expect. I just hope this isn't a procedural type of show.

Aren't all serial killer dramas some sort of procedural?

I don't think so per se.

Procedural shows for me are ones that have a crime per episode, while the opposite of that would be a crime show trying to solve ONE particular crime in its entire run. I find that the core of procedural shows is really LESS about the crime itself and more on the characters solving it, while non-procedurals are more about the crime & mystery and are better in terms of suspense.

Idk if I articulated that well, but that's how best I can explain it rn 😅