Premiere Watch: The Spies Who Loved Me 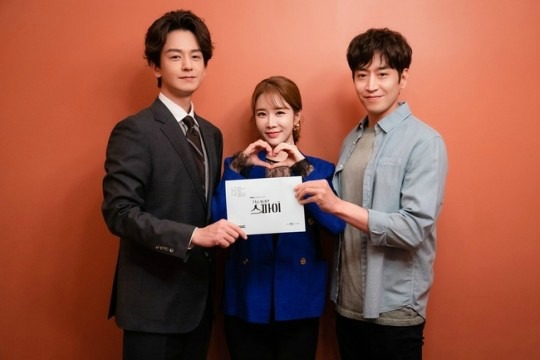 Reasons to watch: This week’s premiere features Yoo Inna with Eric and Im Joo-hwan as the main points of a love triangle made even more complicated by a sprinkling of espionage. Yoo Inna’s calm, happy life is thrown into turmoil when her best friend suddenly goes missing and her ex-husband Eric pops back into her life. Eric’s presence means complicated feelings for Yoo, but it means something more dangerous to her current husband, Im Joo-hwan. Unbeknownst to her, both husbands have been leading double lives, with Eric being an Interpol agent and Im Joo-hwan a corporate spy. As Yoo Inna grapples with the secrets of the two men who love her, she also has to cope with the new knowledge that her life isn’t what she thought it to be. MBC’s had a relatively quiet and hit-free year so far, but I’m hoping that Spies can turn things around for them. May there be great humor, swoony moments and lots of shots of Eric in a leather vest!

Tags: Premiere Watch, The Spies Who Loved Me

So far "The Spies Who Loved Me" is not listed for either Netflix or Viki but it is on IQIYI. I may have to subscribe again but will watch the first episodes first before rushing to do that. This show might be fun. The drawback is having to watch on my computer because Roku does not stream IQIYI.

I work around it via screenshare / wifi direct. Though of course tv has to have the feature.

The next time I buy a TV I will be sure to get this feature.

QIYI is a Chinese online video platform offering TV dramas, movies, variety shows, animation. U can acces via laptop and find many dramas in many languages...

Yes, IQIYI is supposed to be the Chinese Netflix, although it is not doing as well financially. I briefly subscribed when BACKSTREET ROOKIE was being broadcast (when I checked 2 weeks ago it was still in their top ten).

It appears that occasionally they 'poach' a K-drama that would normally be a KOCOWA show. The vast majority of their programming is Chinese and you can find shows there that you cannot get elsewhere- and some that are available elsewhere.

My difficulty has been a desire to keep my TV simple and use a Roku stick, DVD and a good antenna as inputs. It appears that in the future I will have to re-think this for at least one of my sets.

i thank all of you for teaching me something useful! i stick to kdramas mostly but i do love me some jerry yan! hopefully i can access it and find him that way. his are so hard to find with subs especially. @milky and @ old lawyer

That's why MBC had many flops this year (2020) once now became a former K-dramaland hits' home. Ratings mattered and how it skipped audiences into other two free-tv Korean channels (SBS and KBS).

I don't think mbc dramas are what you call flops, because while they didn't have any great hit like other networks, all their dramas do have a steady fan following, which I observed. The reason for that is that they haven't had a drama with extremely big names, like other networks did and planning team did a bad job with their time slots.
And while sbs has done well, they too had big names going for them, so it was expected (but if you notice, even their ratings have been steadily reducing, mbc's kkondae intern has had similar ratings to Sbs's brahms). But if you look at the kbs dramas, this year, they performed much much worse than mbc. Ratings wise, all mbc dramas range between 3-5% on an average, but kbs for a while has been between 1-3% (the 16 episode dramas). and looking at jtbc, other than world of married, they too range between 1-3%. Tvn on the other hand does well only if there are huge names in the dramas, other wise they too are similar to other channels. So despite all, its just that mbc doesn't have any representative drama for the year, while others do have one.

Amazing! I have trouble remembering which dramas airs on what day, let alone which station is airing them.

I do understand that it may seem a little over to know or research about dramas in general.
But, having watched dramas for many years now and realizing that I missed out on quite a few gems of dramas (which I loved much much more) just because they weren't promoted enough or labelled "flops" because they didn't do well with ratings, made me quite sensitive to things like this.

The guys has some serious hair going in that photo

Poor Im Joo Hwan! The stylists who did his hair should have their combs snapped in two and their blow dryers torched. He looks like a 50-year-old washed-up lounge singer with a receding hairline.

Lounge singer from Vegas... an opening act for and Elvis impersonator... 😂🤣

I'm interested to watch this because the teaser for Spy looks funny and because this is writer Lee Ji Min's 1st drama. LJM is a movie scriptwriter, some movies written by LJM: Miljung aka Age of Shadows, The Drug King and The Man Standing Next.

Wow... I really like to see the motorcycle chase scene where it was seen on TSWLM's poster. I think it would be.

BTW, Eric was still my fave and I don't know if it was allegedly ripoff of any James Bond films. Cause I think it could be a "Korean wedding-meets-James Bond type". I think I already interested with this despite one of my underrated 2020 K-dramas and some hilarious espionage stuffs there. I can't wait to see this fun TV series and I promised to be married with one of the spy at the end of this series.

Someone please give Im Joo-hwan a haircut stat. It has been distracting me since the first promo of this show.

I am not a fan of either of the guys nor the storyline but for me Yoo In Na can do no wrong so I'm in.

Oh my gosh, does Im Joo Hwan have I-can’t-get-a-haircut-because-it’s-Covid?

Another drama to the Wed-Thurs line-up. Missed YIA so might check out the first few eps.

very excited to see Eric back on screen and i love Yoo Inna too! it could be very interesting or it could be a cliched mess. i will watch either way though cause Eric can carry it for me!

I don't know how this is going to go down, but I hope in the end she leaves them both and lives her best life

I came here to say exactly this.

Im Joo-hwan looks 5-centimeter taller. Perhaps he has been to the hairdressers shop in Eunpo.

i expected so much more from eric's pole dancing, dammit... he should've used some of his vogue moves from Shinhwa's "This Love" MV....
: [

Nonetheless when he actually started doing it, I was shook 😂 it was a good first episode, how did you find it?

i'm BIASED... so of course, i LOVED IT.....
: D
in all seriousness, i think it got off to a pretty good start. i like the main actors, so i hope it is a fun drama with good chemistry, if nothing else....

It reminded me Discovery of Love that I loved with the encounter during a trip and the reunion by chance. I liked the humor and I'm excited to see the second episode.

try watching it at dramac**l