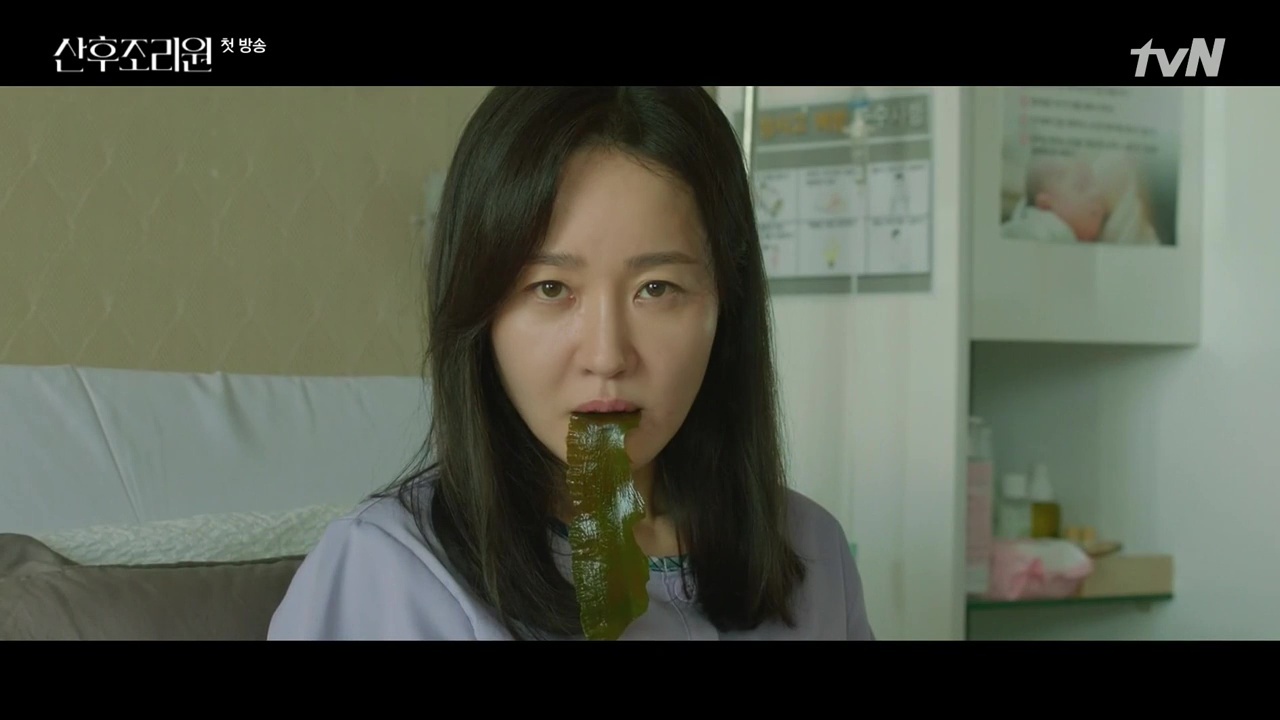 I came to Birthcare Center with not much more than an inkling of the plot (mothers at a ritzy postpartum care center) and the fact that it was a female-led cast. Well, the drama is exactly that — but so much more. Comedy? Thriller? Healing drama? Horror? Mock horror? Check all the boxes, because Birthcare Center does a little bit of everything. 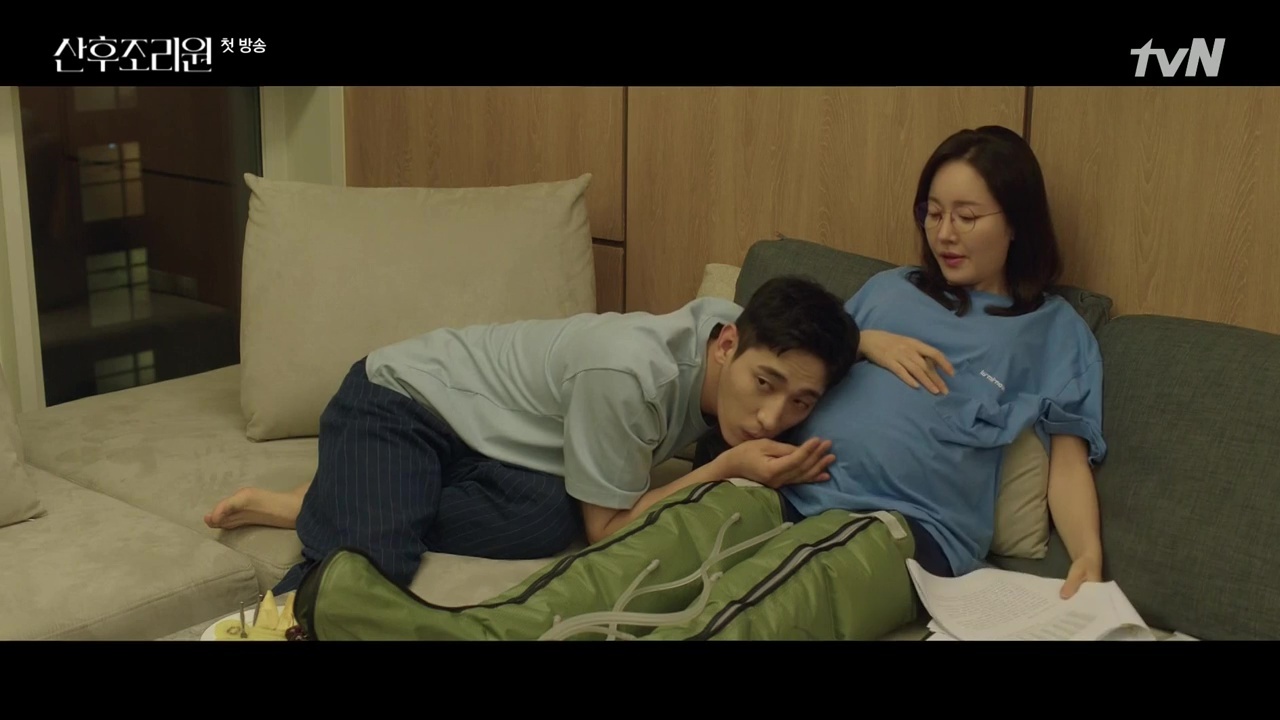 Birthcare Center takes an interesting and very narrative-driven approach to its first episode. It’s straight storytelling, with our heroine OH HYUN-JIN (Eom Ji-won) at the center of it. She’s immediately likable as the no-BS managing director of a cosmetics company, and she’s making waves because she’s the youngest person in the company to get promoted to this level — and she’s a woman. Gasp!

Hyun-jin has poise and intellect and she’s obviously very good at what she does (and a total workaholic). So, when she almost barfs during a press interview celebrating her promotion, it’s not exactly the shining moment she had in mind. Then the news comes: Hyun-jin is pregnant. She’s around 40, so it’s not only a “miracle” pregnancy (so says her doctor), but it comes at exactly the same time as her promotion. Our heroine, long dreaming of both, is totally shocked. 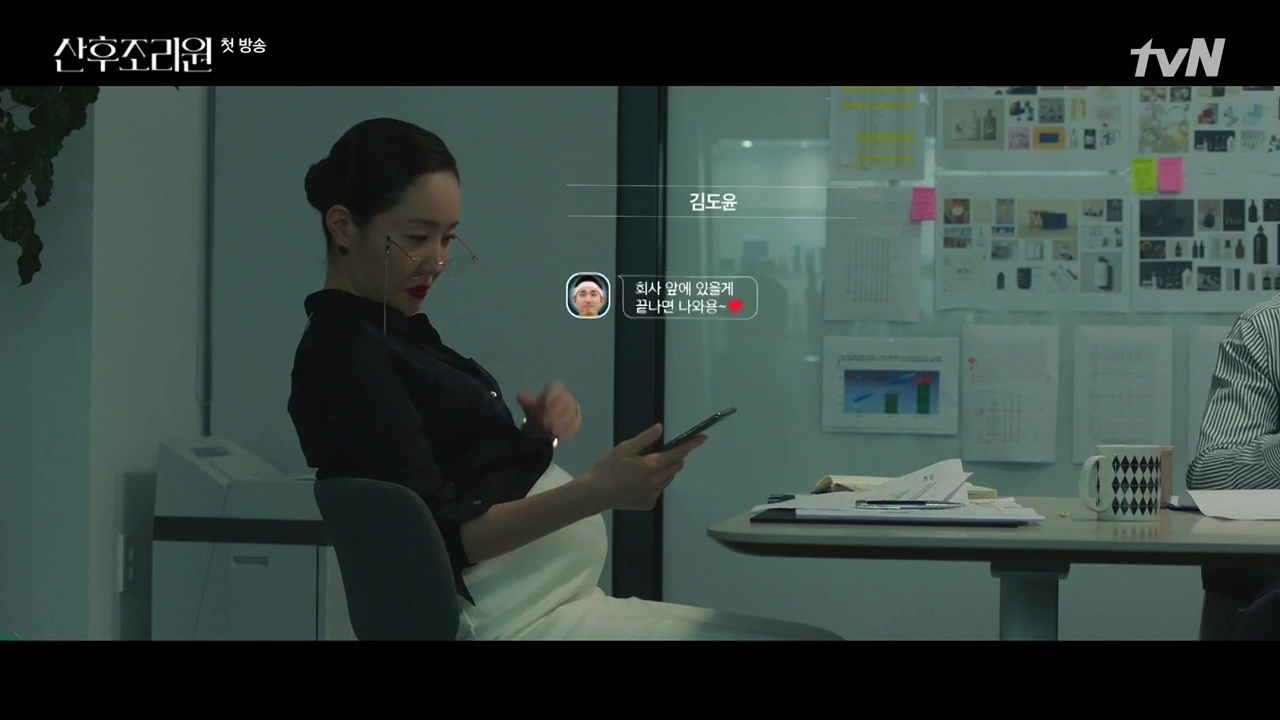 Birthcare Center paints such a great picture of Hyun-jin looking every bit the girl boss, sitting at the head of the conference table, dressed to the nines with a huge baby bump answering texts from her husband. I love her!

Her husband is KIM DO-YOON (Yoon Park) who’s super devoted to her and their baby — he attends all of Hyun-jin’s pre-natal classes in her place, since she’s too busy working to deal with any of it. They’re such a fun couple with an interesting balance we don’t normally see in dramaland: the woman breadwinning. Also, this is such an unexpected role for Yoon Park — I had no idea he would be so good as doting and derpy. (And his comedic bromance with Lee Joon-hyuk) will be hard to forget.) 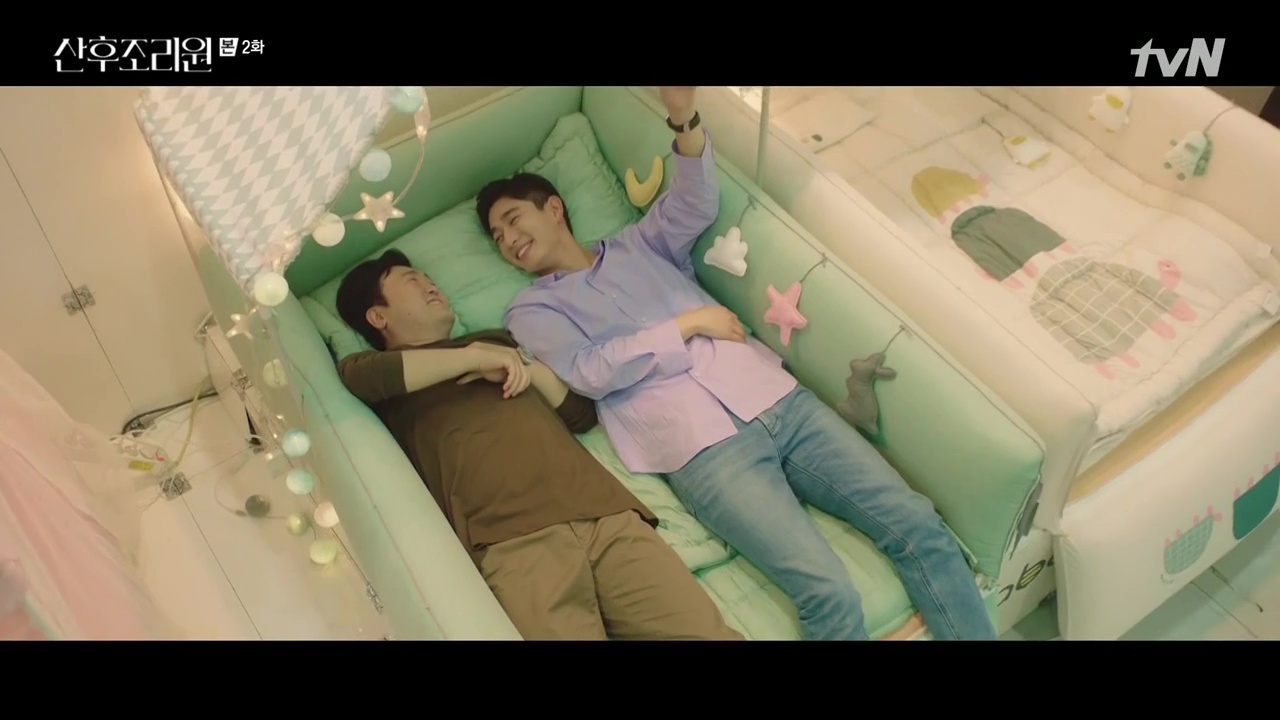 Episode 1 quickly takes us through Hyun-jin’s pregnancy and right into the delivery room — but not before showing us (again) how Hyun-jin is all business. We watch her drive like a lunatic to close a business deal before a CEO flies out of the country, and while they’re signing contracts on the sidewalk, her water breaks. Hyun-jin doesn’t bat an eyelash, closes the deal, and then calmly calls her doctor to alert them that she’s in labor.

Watching a woman’s water break in the middle of the sidewalk isn’t something we see every day in dramaland, and it’s only one example of this drama’s total frankness about all things related to pregnancy, giving birth, and female bodies. I’m all for frankness, and celebrating the amazingness of pregnancy and childbirth, but Birthcare Center can also make you squirm a bit. Hyun-jin is embarrassed as nurses give her an enema, shave her pubes prior to delivery, and as male doctors peer under her gown to see how much she’s dilated. It’s not the content that’s squirmy as much as it is the way it’s delivered: we see our heroine uncomfortable, so we feel the same. 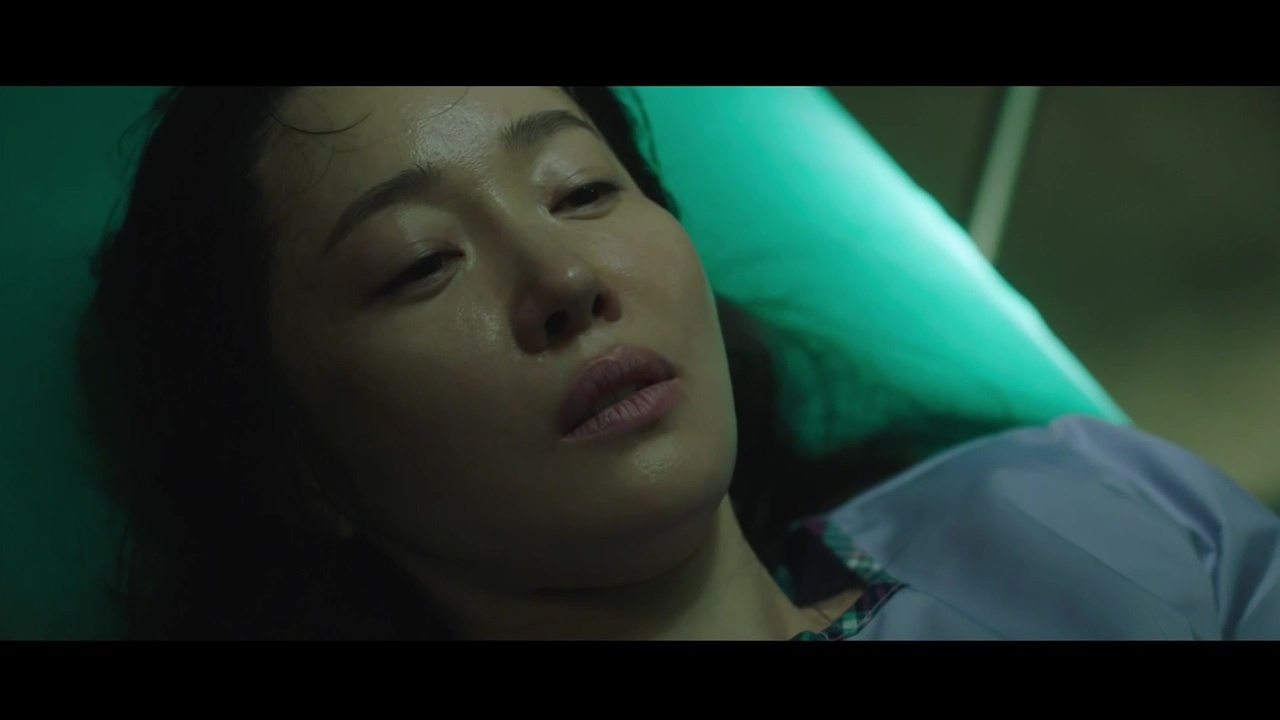 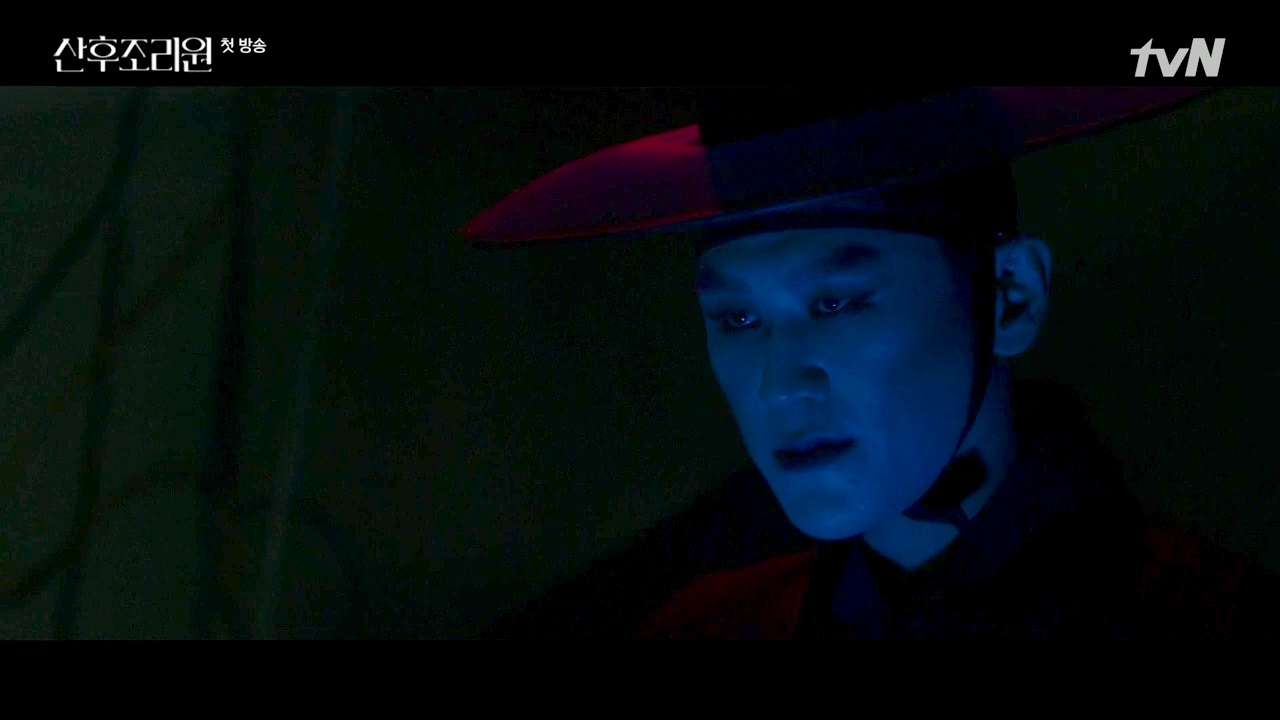 Birthcare Center does a lot more than present pregnancy and childbirth on screen, though — it also jumps tones so frequently that you don’t quite know what hit you. While this worked for me pretty well during Episode 1, but by Episode 2 I found myself a little fatigued by the tonal shifts, and still not quite sure how much of the story to take seriously.

Am I supposed to be invested in Hyun-jin’s struggles as a new mom? Or is it just supposed to be comedy? The story is presented as everything from comedy to mock horror to genuine drama that makes you tear up with pathos… so I left the premiere week more than a little confused. I don’t mind jumping genres and going from laughing to crying when I know that’s what the drama intends, but I didn’t leave Birthcare Center feeling like I knew what it expected of me. 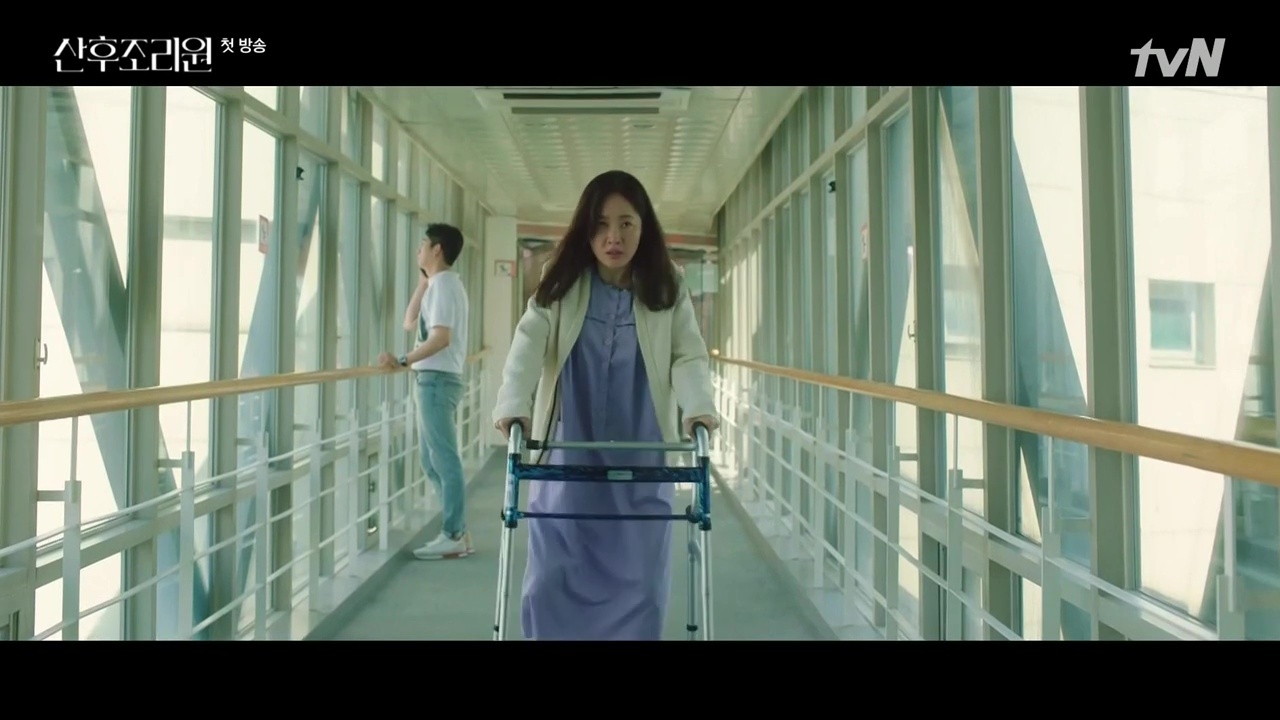 Some of it is hilarious, for sure, like Hyun-jin sneaking around the hospital, desperate to snag her first beloved iced americano in months. And there are great little moments, like her husband trying to deliver said coffees to her and getting hijacked by his mother-in-law, or Hyun-jin getting blamed for peeing in the elevator when it was the new mother next to her that did it.

But then there’s also a dash of incredible seriousness, like the sequence during Hyun-jin’s delivery, when she passes out and has this metaphorical encounter with a reaper, coming to collect her (this is acted out dramatically early on in the show, but during the delivery sequence, he appears in the room in a straight-up horror fashion). 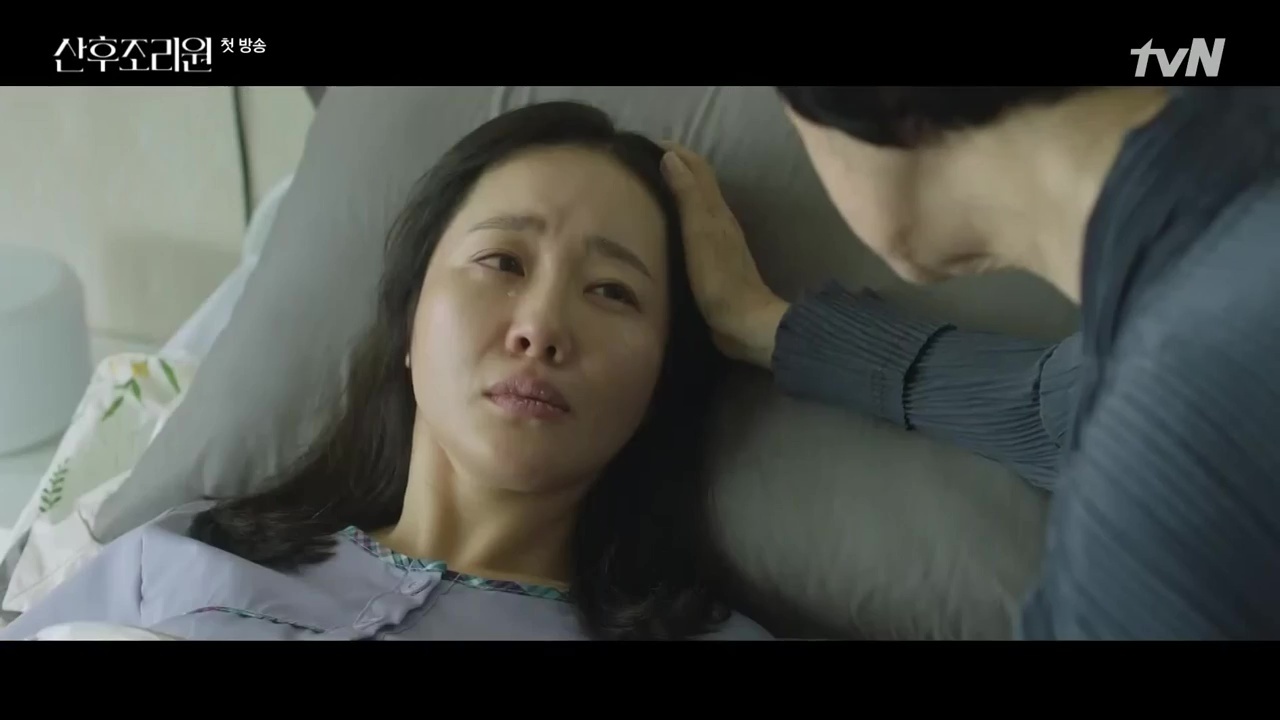 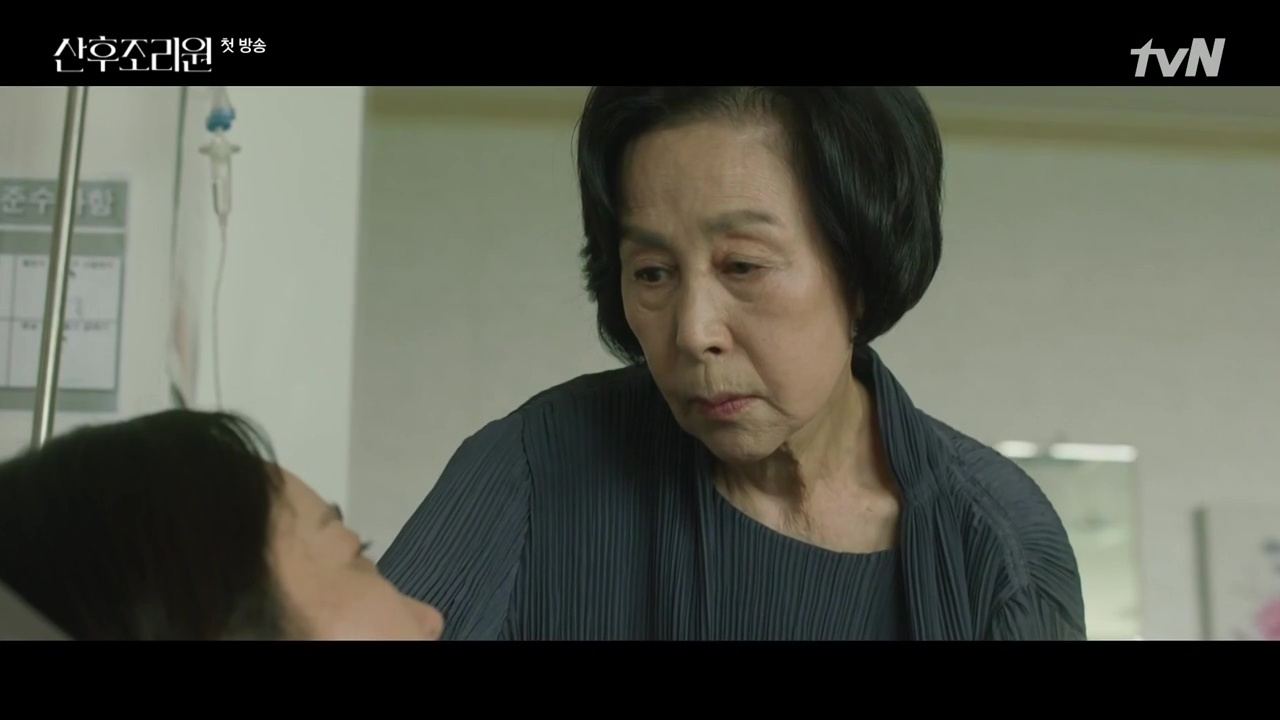 Another scene I found really moving was when Hyun-jin was in her hospital bed recovering, and everyone was fussing over the baby (whom they’ve been calling “Glue Stick” since he was in utero) and ignoring her. Kudos to Eom Ji-won here — you could feel her surging, complicated emotions, and the aftermath of the delivery she’d just been through. When her mother arrives Hyun-jin calls out for her, and her mom rushes over and dabs her dried-out lips… gosh, tears! It was such a genuine and heartfelt moment.

But these more serious, genuine moments don’t last long, and if they’re not interrupted by comedy, they’re interrupted by mock horror — or even mock melo, maybe? It’s hard to articulate what the drama does sometimes. It’s tongue-in-cheek, for sure, but it’s also odd. Sometimes even off-putting. 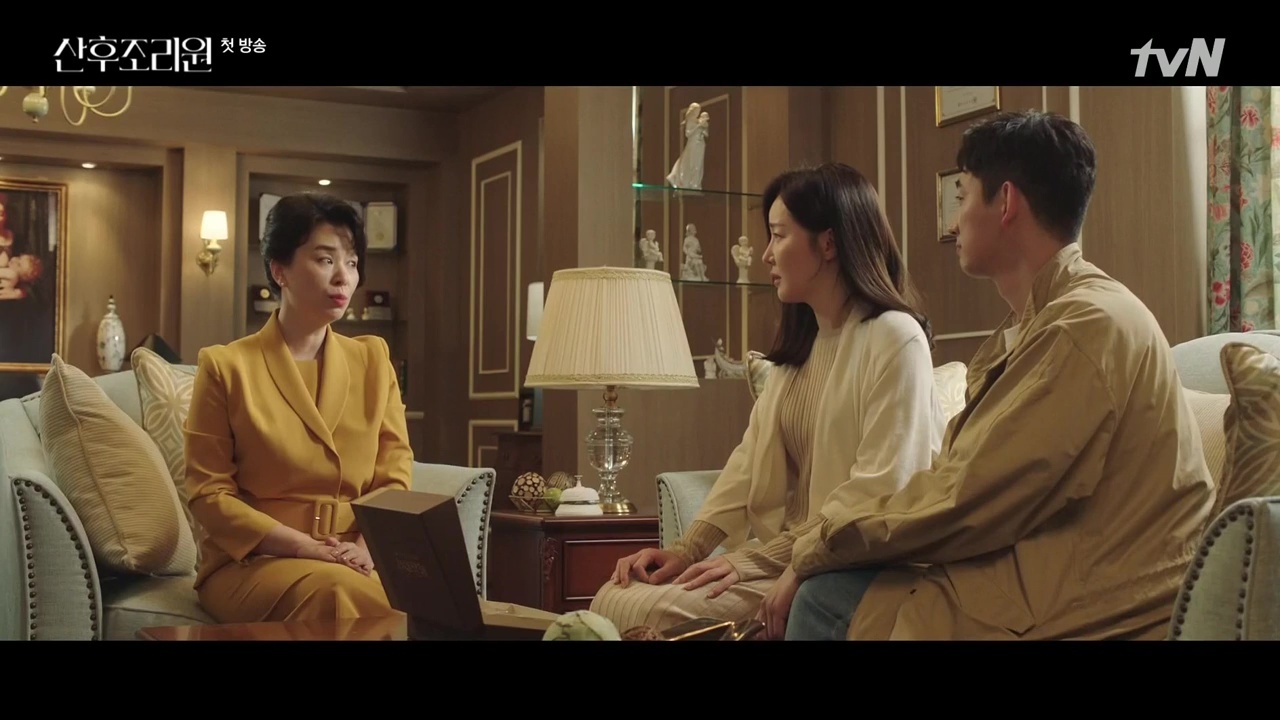 At the end of Episode 1, Hyun-jin is discharged from the hospital and goes to Serenity Birthcare Center with her husband and their baby. Here the story sees a big shift, not only in setting, but also in tone — and I’m not just talking about the lavish surroundings and the promise of nourishing food, daily massages, and the like, to help mothers recover physically and emotionally from childbirth. More than that, there’s a lot of weirdness afoot.

Is there something creepy going on at Serenity? The cliffhanger ending of Episode 1 could make us think so. DIRECTOR CHOI (Jang Hye-jin), who runs the center, meets Hyun-jin in the hall at night. There’s a thunderstorm, and Hyun-jin is startled — and even more so when Director Choi reaches out and grabs her breasts. Omo! The tone is so weird, and goes from this mock horror to comedy when the scene continues in Episode 2, and Director Choi says she was merely assessing whether Hyun-jin was ready to produce milk or not. Am I supposed to laugh? I’m not sure. 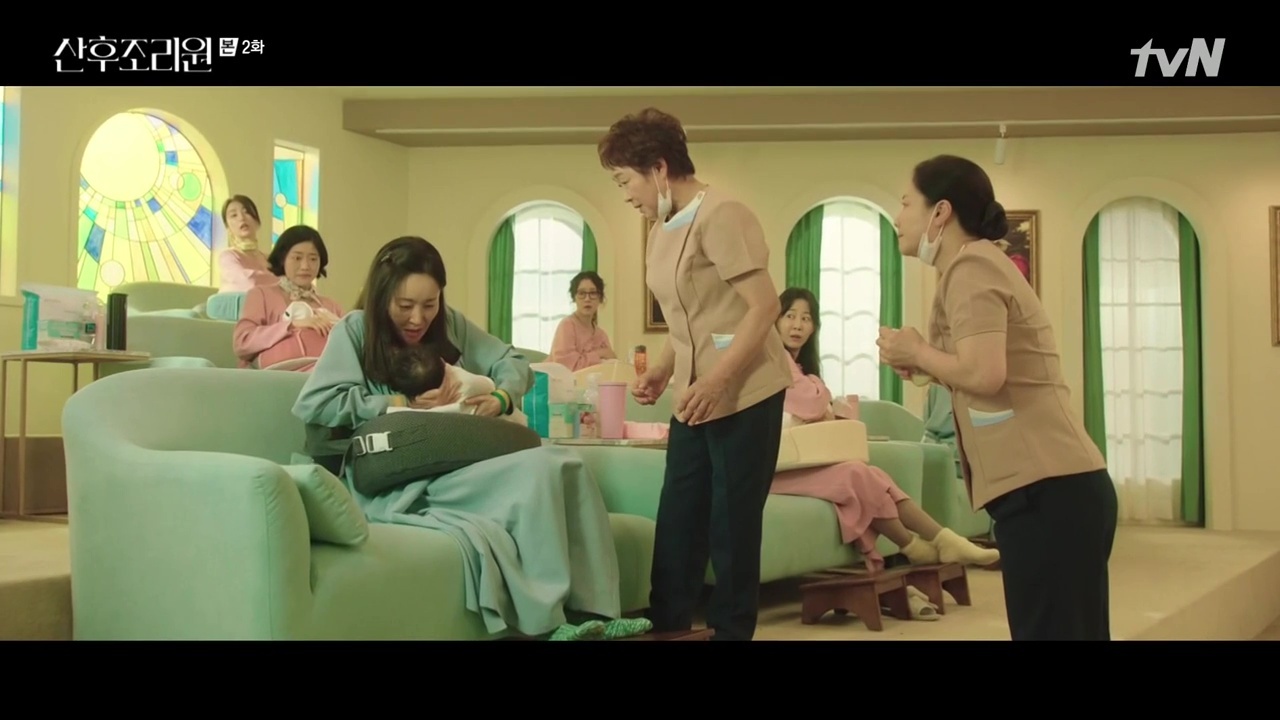 Serenity turns out to be a weird place, and Hyun-jin is totally at the bottom of the food chain amongst all of the “goddess” mothers around her. She’s used to being at the top, so it’s hard for her to be looked down on for her late pregnancy, for intending to go back to work A.S.A.P., for having difficulty breastfeeding, and more.

Again, though, we’re not left to feel only empathy for our heroine, because the drama is also trying to be funny through its outlandish handling of certain scenes. Whether they’re inserting odd play-acting scenes, doing dance numbers, or finding cheeky ways to show (but not show) nursing mothers and lots of breast and nipple problems, it’s quite something. 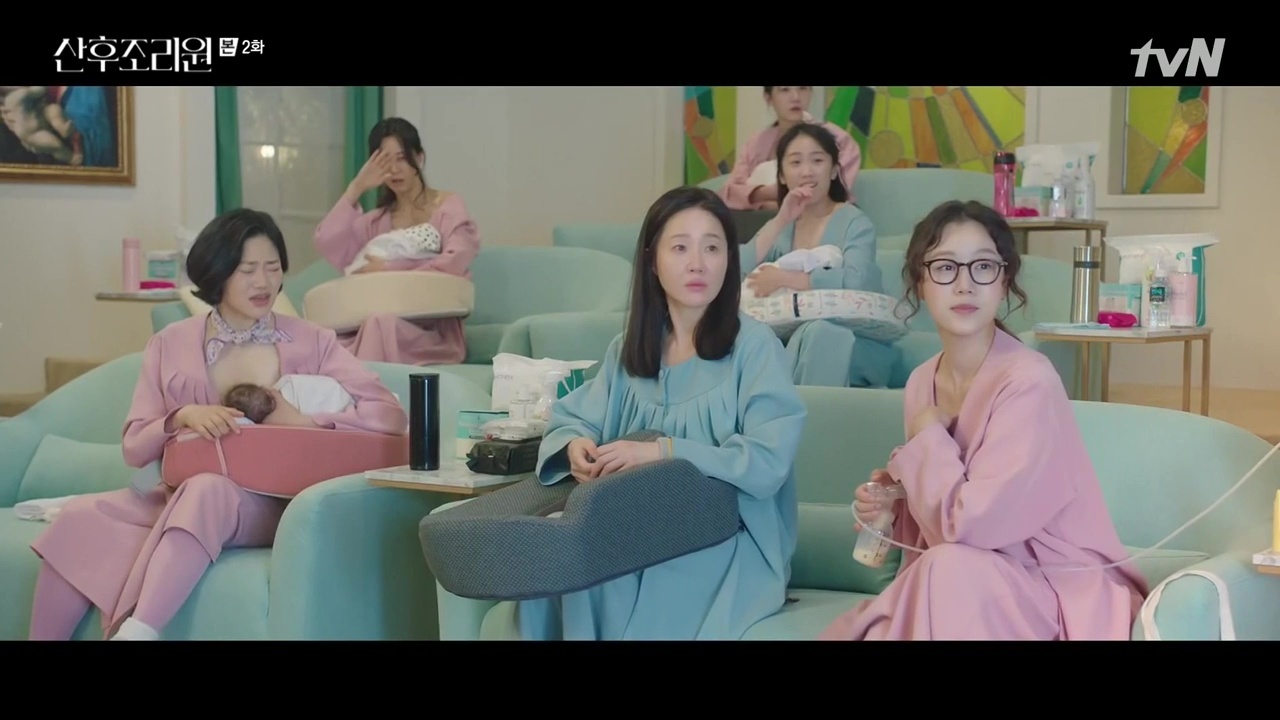 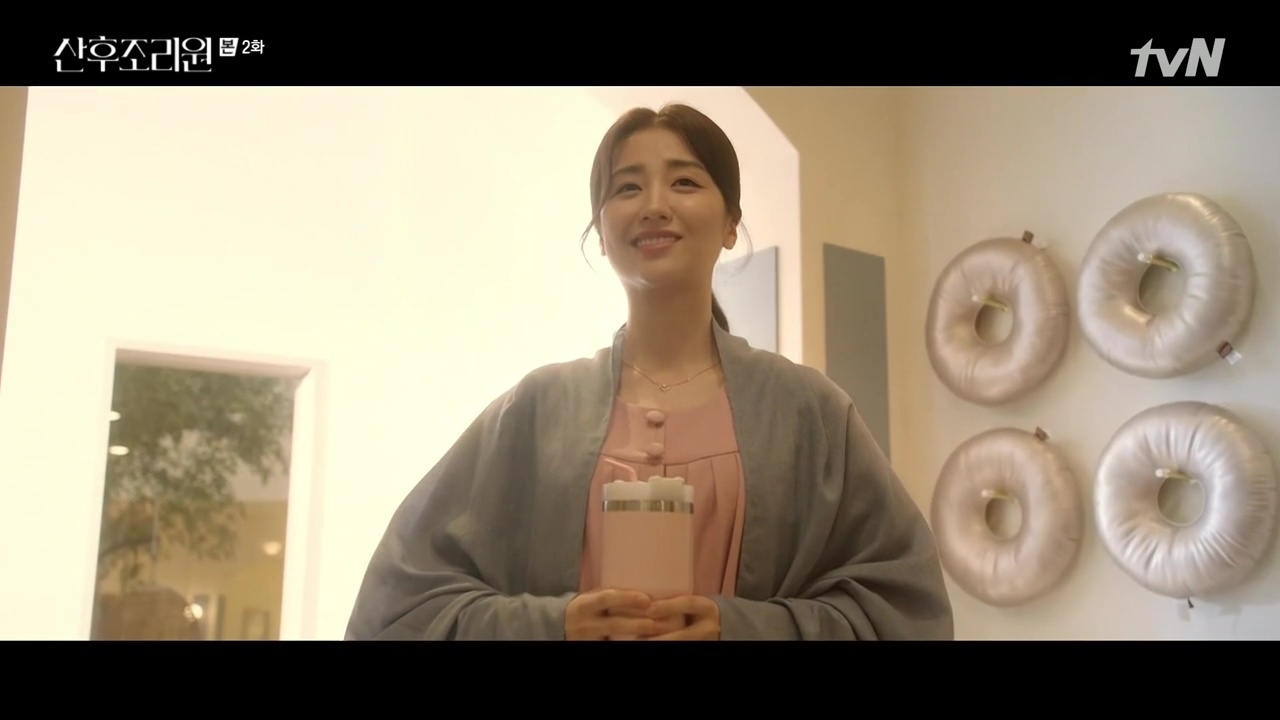 I actually enjoyed the story more during Episode 1, when the balance of comedy and drama made more sense. There’s something about the setting at Serenity that I didn’t like… and it’s not that I don’t want to see a frank and honest drama about new mothers who are dealing with strong emotions and recovering bodies. Perhaps, instead, it’s the execution that makes it hard to fully process this drama’s message?

I mentioned the hierarchy of mothers at Serenity, and this is where we meet the rest of the main players in the drama. Whether they’re top-mother-goddess JO EUN-JUNG (Park Ha-sun) who’s lauded for nursing her two twins for 24 months and just had child number three — or the arrival of the new unicorn-haired rebel mom (Choi Ri) — these mothers are at the center of the plot. Whatever that plot actually turns out to be. Because I still don’t understand how all of these pieces and tones come together — or are intended to come together.

Will the drama be a real yet playful look at motherhood, or an irreverent social satire? Is it going to be an actual thriller with the new mothers discovering creepy things at Serenity, or is the mock horror element just there to bring extra drama and comedy into the mix? I’m not sure, but maybe we’ll get a clearer sense next week. 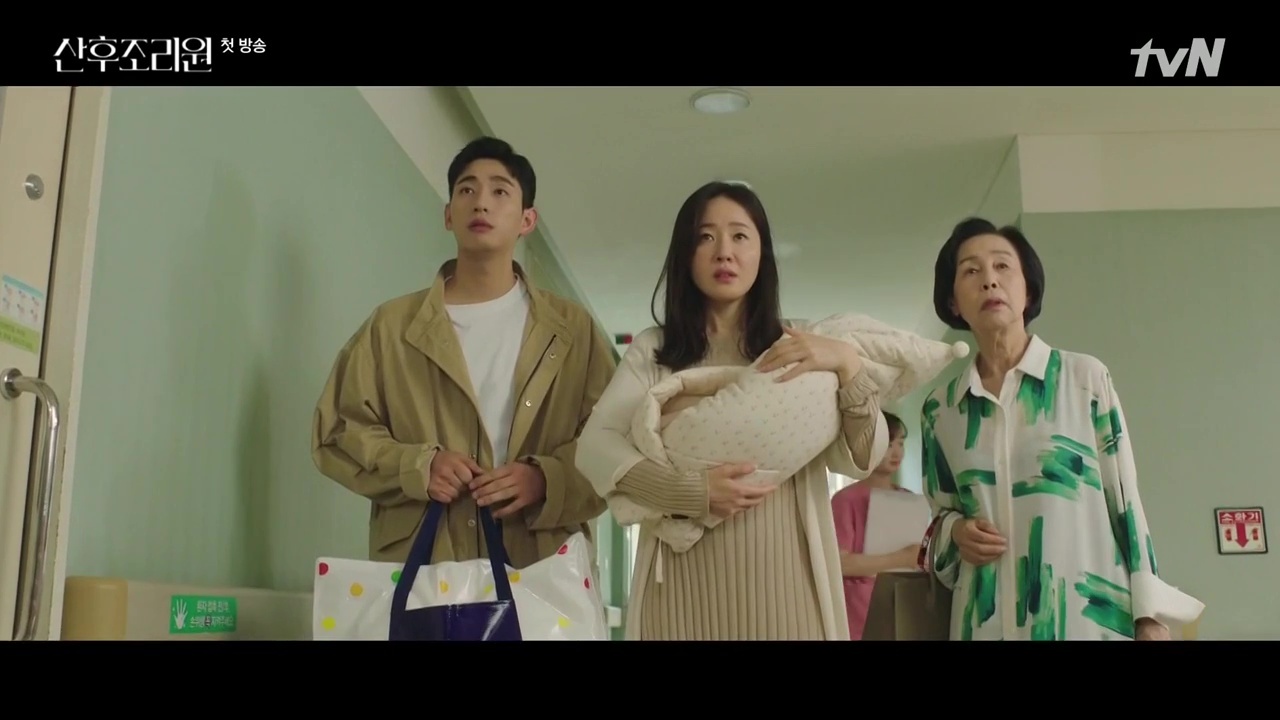 I think it was very interesting for once to picture the delevery like this. It's always showed as the most beautiful day of the world. But there was a study in Swiss Hospitals when the women (27%) felt a obstetric constraint during their hospitalization : "either they felt uninformed, pressured, intimidated, or disagreed with a treatment decision."

I like the discussion when Jo Eun-Jung said every mother was crying in their bed the night and Hyun-jin was not alone.

Tonal whiplash, that is what I had for this drama. I wish it wasn't a comedy because they are being frank about pregnancy, but making parts of it a joke ruin the seriousness of it. So instead of being quirky and delightful, it is just weird and kind of uncomfortable. It is unfortunate because I too came in with no expectations except wanting to like this.

This doesn't make me want to watch this, which is a shame because I was definitely curious. Think I'll put it on the shelf and look at something on my to-binge list instead.

Weird apparently works for me because I really enjoyed these episodes. The tonal shifts didn't bother me. I love Yoon Park in this.

Also, it's not really my thing. More tomorrow.

One of the real value of Dramabeans is that it can really help us get a feel for a show before we commit to watching it. At this point this show simply does not seem to suit my tastes. We all have preferences and things that we like- and it is a universal truth that our tastes are going to differ- which is actually a wonderful thing. I am going to put this one on the back burner for the time being.

Came back after a year to see Dramabeans thought on this drama since I've been seeing snippets of this for a while. It's sad though that a lot of beanies seem to find this not interesting.

From what I've seen so far though, I can connect so much to what our main lead is going through. Even though some scenes in the drama seem over the top, I can relate so much to the overall thoughts and sentiments behind them. (Going through my first pregnancy fairly recently, I thought that some of the "over-the-top" scenes seemed pretty accurate though... haha!)