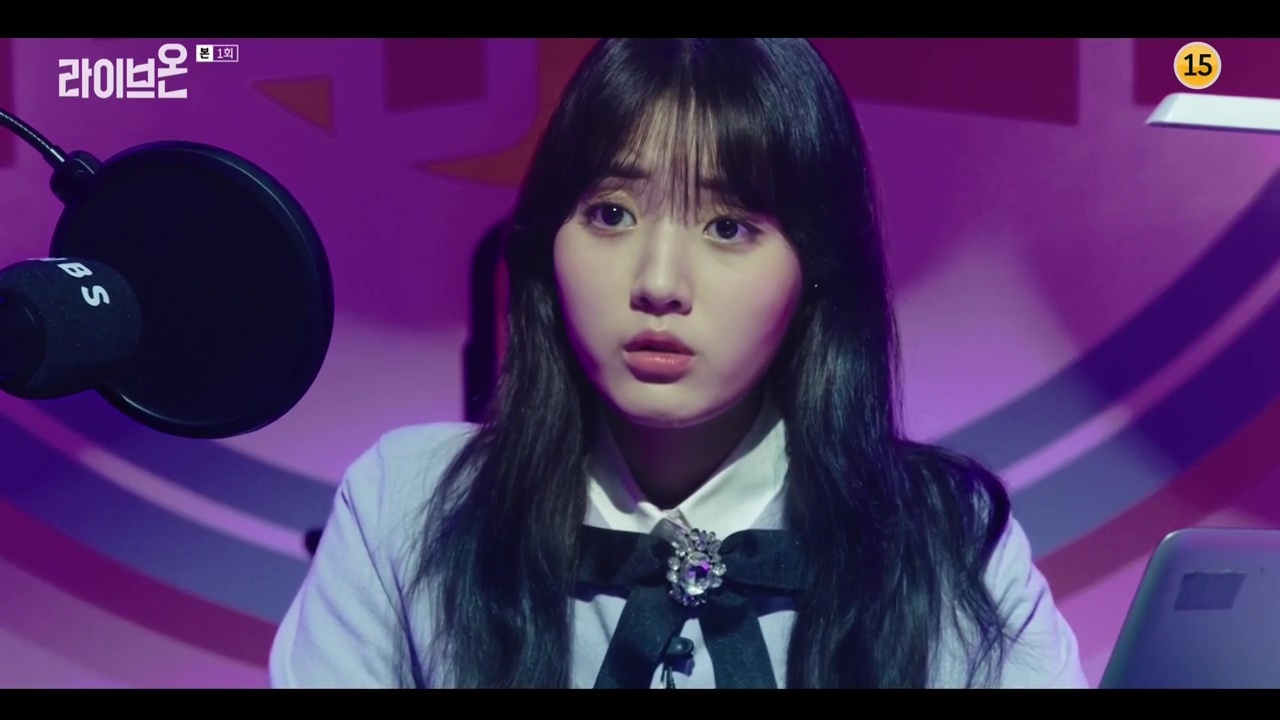 We’re only one episode in, but Live On already feels like a pretty fresh, plugged-in sort of high school drama. It’s rife with, well, drama, from students with attitude problems, to students with secrets to protect. High school is one of dramaland’s favorite settings, but as if that wasn’t already enough of a microcosm, Live On feels even more insular, with much of its story taking place via social media. 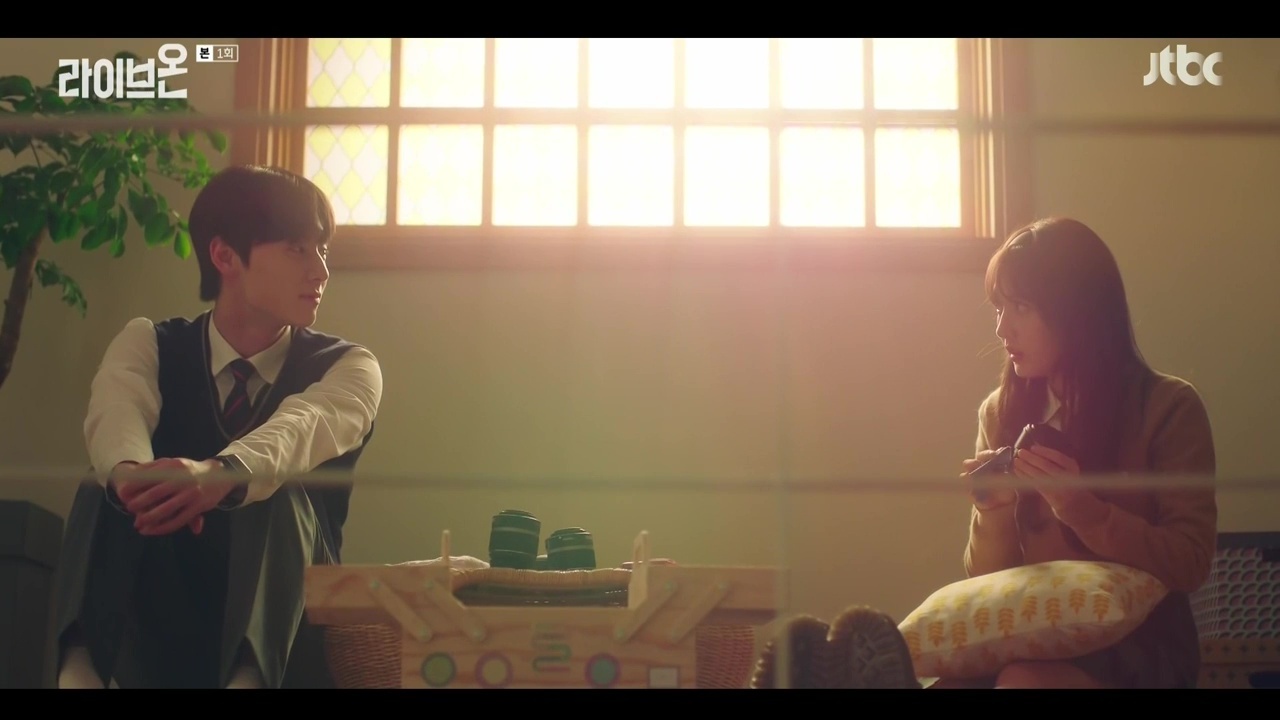 Our drama opens with our heroine and SNS queen BAEK HO-RANG (Jung Da-bin) recording a live broadcast at her school. As with most social media broadcasts these days, it’s full of live feedback and comments from her audience. She seems almost universally worshipped for her snarky comments and ulzzang-ness — that is, until one ill-fated comment brings the whole thing crashing down.

This scene turns out to be the climax of our drama, and we jump back a month prior, to September 2020 and the first day of school at Seoyeon high school. We meet a flood of classmates, and most of them are pretty antagonistic towards each other. Ho-rang seems to be the topic of most conversations, since she’s got a huge SNS following of 170,000 — but there’s also a lot of gossip around her being cold, snippy, and generally not nice. 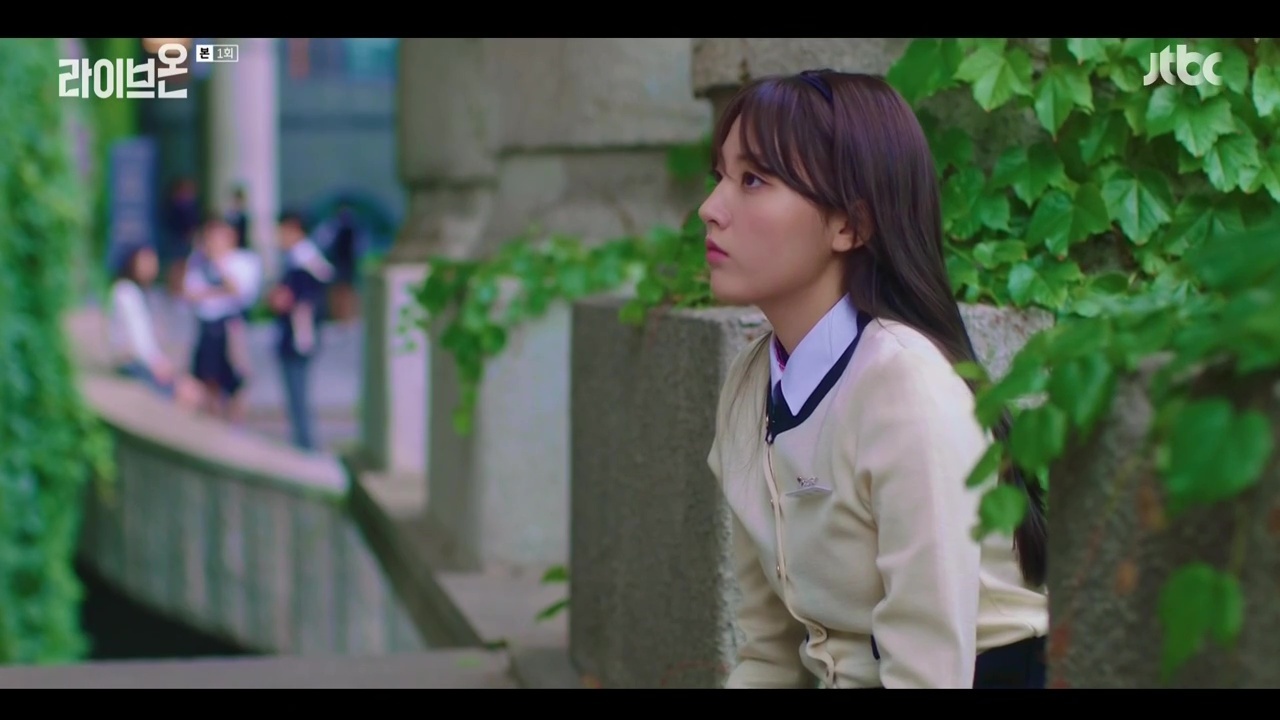 Sure enough, Ho-rang seems like all of those things. We see her snapping at people and walking around the school like she owns it, and she’s pretty unlikeable as a main character — except the story pokes just enough holes in that concept to make us wonder if there’s something more to her. Maybe it’s all just a front?

When we see Ho-rang with a crowd, she acts one way, but when she’s alone, she acts differently. Ho-rang even seeks out solitude, quiet, and rest — once leaving class to rest in the school garden (literally) — and whenever she’s inside, she’s always opening windows and taking in fresh air. It’s as if she’s suffocated by something… It seems like this is a physical response to an emotional reaction, and it’s this characterization that got me interested in her character. 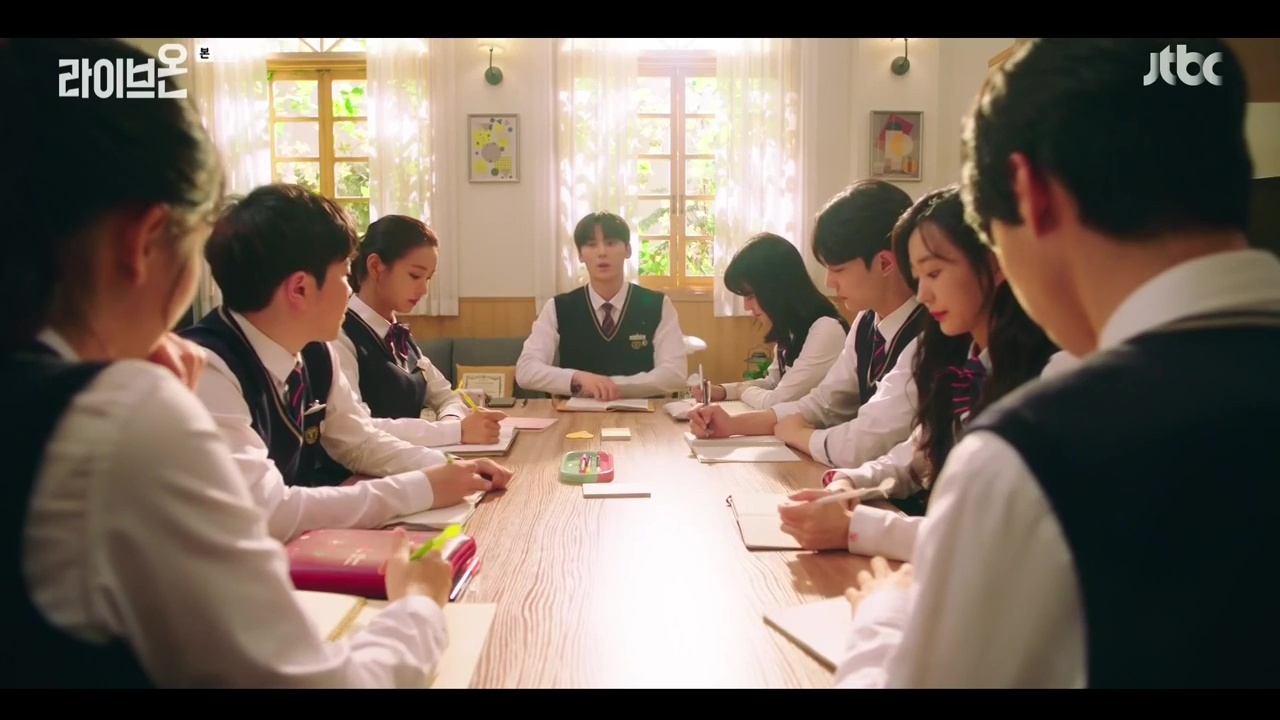 There are so many high school dramas that I flat-out love (with Extraordinary You, Sassy Go Go, and School 2017 probably at the top of the list), that I tend to measure my high school dramas expectations by those standards. Each of those dramas had this spark about them — and it’s that spark I’m hoping for in Live On. I’m not finding it yet, but it’s early.

Also working to this drama’s advantage is the fact that the PD of Extraordinary You is at the helm here as well. Surely that alone is a reason to get excited? (It is for me.) So far, I can grab onto fragments of that magic here, and I’m hoping it gets stronger as the drama continues.

Speaking of Extraordinary You, Kim Hye-yoon turns up in an early cameo here — she plays the previous anchor of the school’s broadcasting club. That broadcasting club is the focus of the other side of our story, because that’s our hero’s territory. He’s GO EUN-TAEK (NU’EST’s Minhyun), and he’s the president of the club. He is as persnickety as you can imagine, and even borderline obnoxious, but the more we see of him, the more likable he becomes. 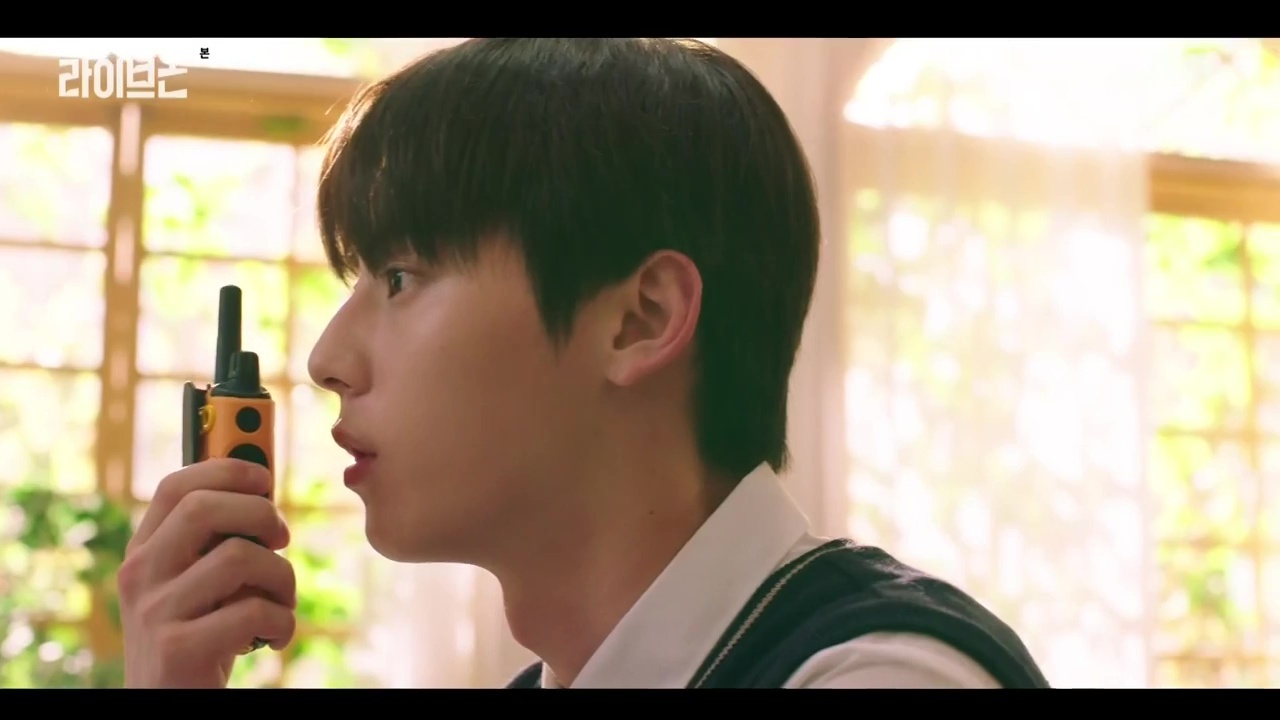 Eun-taek is a master time manager, and also a little obsessive-compulsive. He measures out his day’s activities in hour-long-increments, and is incredibly rigid with himself and others — and to land that point, we see him interacting with the members of the broadcasting club and holding them to his sky-high standards.

The other club members might be intimidated by him, but it seems like they also respect him as a person and a leader. JI SO-HYUN (Yang Hye-ji), the second-in-command, seems to particularly respect him (with a side of unrequited love, perhaps?). Either way, it seems like Eun-taek’s stick-in-the-mud personality is actually perfect for the broadcasting club, which relies on precision, exactness, and an iron-clad schedule. 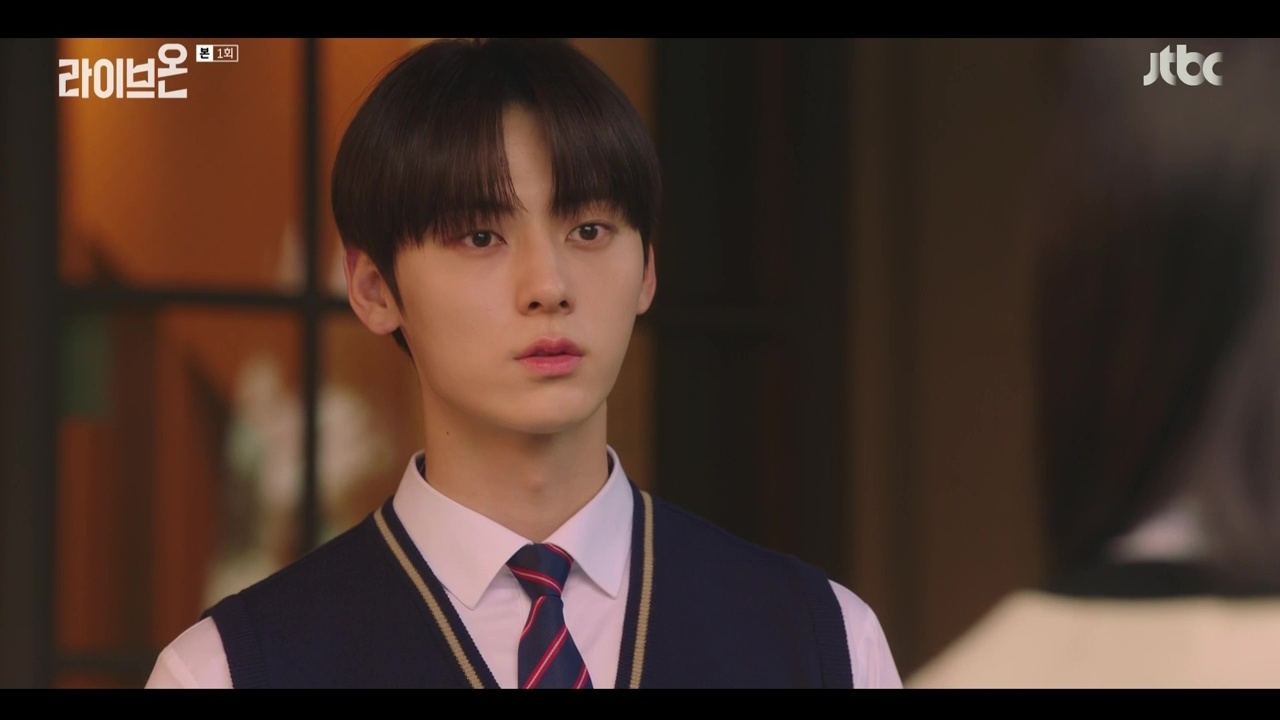 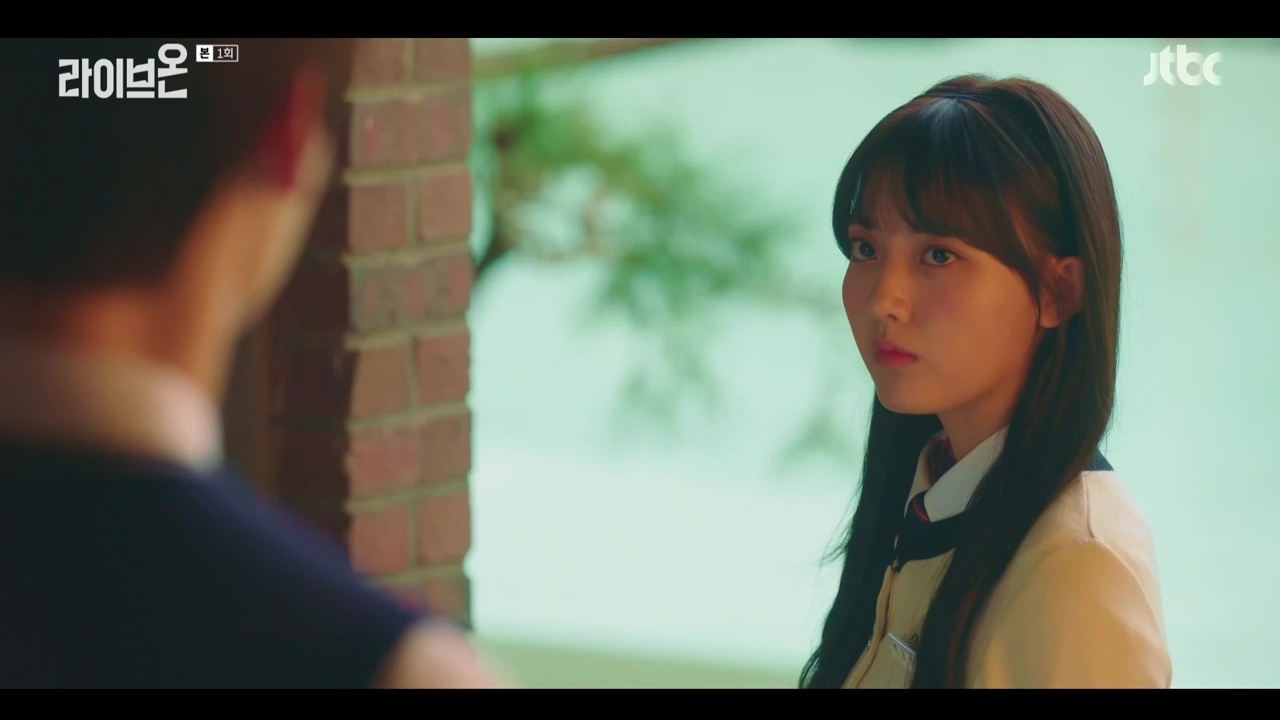 Our two not-super-likable main characters are destined to clash, of course, and that’s just what we start to see in the second half of our opening episode. The broadcasting club needs a new anchor, and there’s no one better for the job than SNS queen Ho-rang. This is where our leads first meet, with Eun-taek trying to scout her, and Ho-rang one-upping his rudeness with even more rudeness when she turns him down and insults him. Boy, they’re a match made in K-drama heaven, for sure!

The turning point for Ho-rang, though, is when it’s clear to her that she’s being threatened… by an anonymous letter-writer. The broadcasting club regularly reads letters submitted from students as a part of their programming, and Ho-rang hears one that sends her into panic mode. It’s a cryptic reference to a birthday party and some random items that mean nothing much to us now, but mean a whole heck of a lot to Ho-rang. 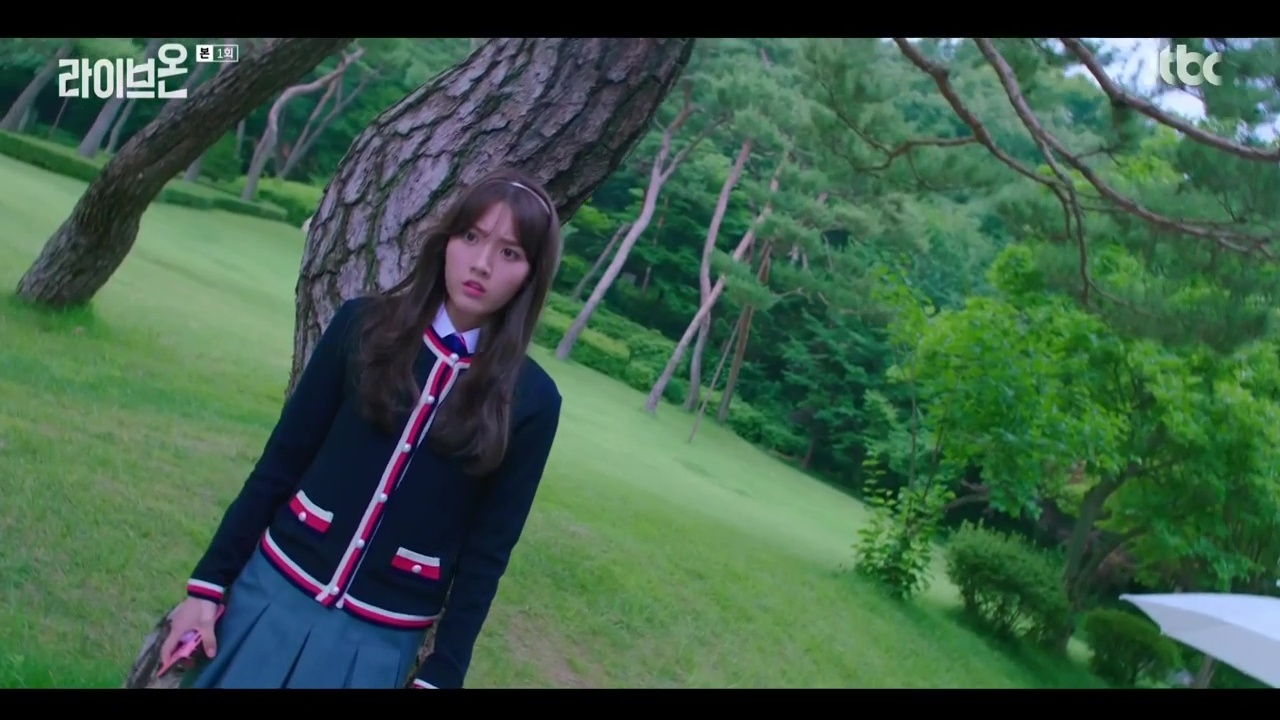 So, Ho-rang quickly reverses her stance, and shoves her way into the broadcasting club. Eun-taek might dislike her impulsive behavior, but he can’t deny her talent/pull, and so she joins them. She doesn’t care at all about broadcasting (though she lies it’s her new career aim) — all she wants to do is identify the writer of the taunting, secret-holding letter.

And as we close Episode 1, we see how desperate Ho-rang is to scratch her way to the bottom of the mystery and her secret tormentor. First, it’s with manipulation and white lies. Later, though, when her notorious temper gets the best of her, it’s with a full-on broadcast hijacking. This girl means business. 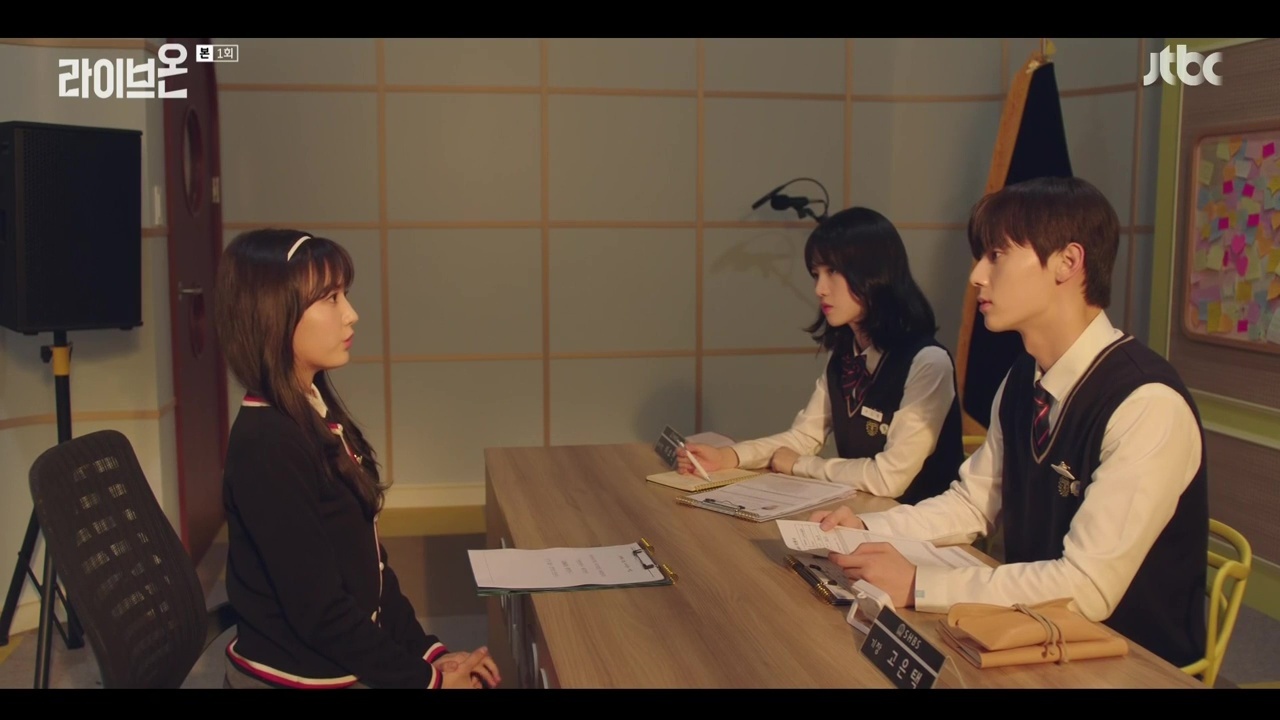 We leave Live On’s opening week episode with a pretty good sense of our characters, and enough plot development to make me think that the eight episode count will be just the right amount.

Most importantly, though, we have a strong sense of our characters’ world — most of which takes place on social media. Much like I felt with Love Alarm, so much of the drama is spent watching kids staring down at their phones, reading messages, looking at posts, and liking, commenting, DMing, and so on. Maybe I’m just getting old, but there’s a point where this starts to become a little depressing — but in some respects, I guess a lot of our lives really are contained by the tiny computers we carry around? But I digress.

As Live On’s story is filling in, so are the characters. That’s all well and good, and I’m curious what will happen to our characters — but my issue right now is that they’re not terribly likable just yet. Also, the drama kind of sits between the cutesy high school drama tone (like Sassy Go Go), and the darker ones (like Angry Mom and How to Buy a Friend, maybe?) so I’m not quite sure if Live On will lean in one particular direction, or stay hovering between the two. It’s still early, though, and I think the drama will find its tone — and even find its spark — as we get deeper into the story. 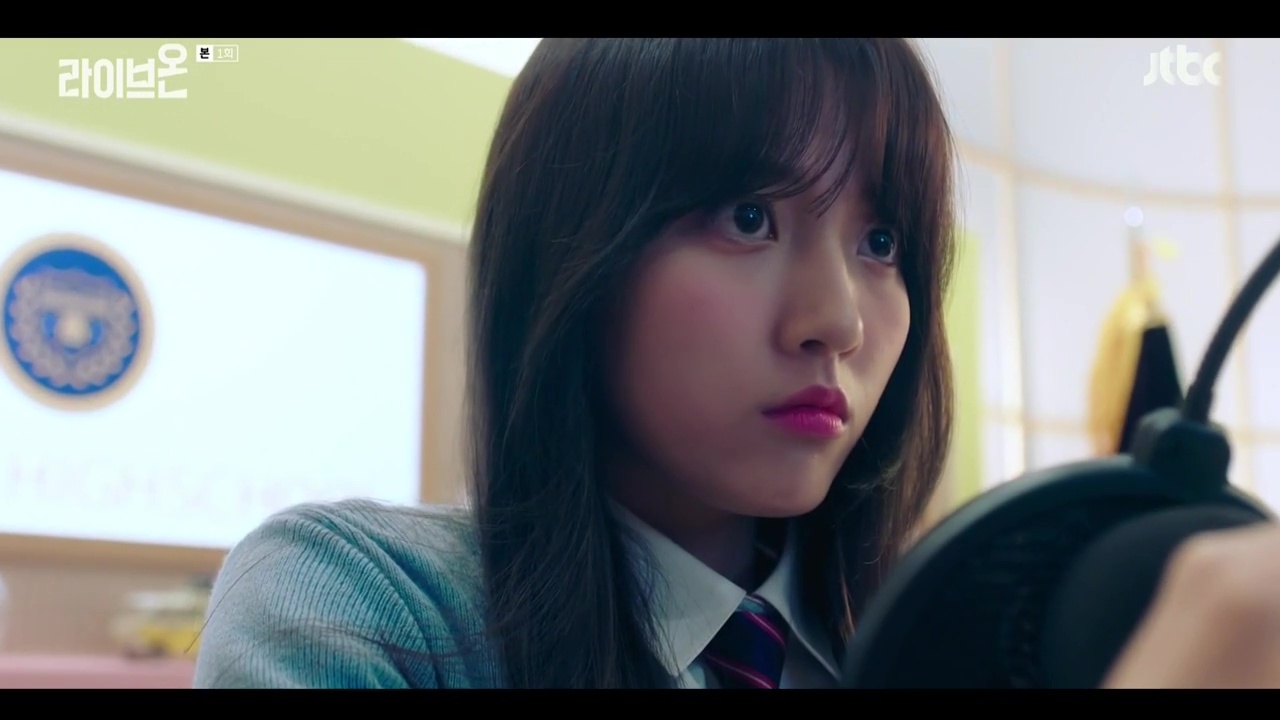 The first episode kept me on my toes. I was all the time like "omg, this is unexpectedly dark, so dark, I love it!"

Oh, I realized there were 2 PDs for Extraordinary You and one is doing Live On and the other one True Beauty.
I had some issues with the FL. Firstly, her behavior was not like other but she didn't seem wrong neither, she just didn't want to socialize what can be weird for a person who needs instagram to make money. But sometimes, she was really a brat. For the radio, she was late, etc. Her need of fresh air made me curious, why she always feels so suffocated.

For the ML, he's pretty typical for a drama, so I'm not really curious about him.

There is definetely something between the FL and Ji So-Hyun.

The first episode was kinda disapointing. But I will watch a little bit more because Jung Da Bin is a great actrice and I really like her.

Well first episode was underwhelming.
The drama is set in the world in which SNS rules everything and studies seems secondary, so drama setting is semi-realistic.
The ML and FML are coming across as one-note. ML is cold perfectionist, the FML came across as bratty. The show is trying hard to show there is more to her than her cold, bratty, bored exterior but I have not felt it yet. Then again this is only first episode, we have 9 more to go, hopefully characters will reveal more layers.

None of the characters stand out, none of them are likable yet...Make lead has a giant stick up his rear end and lacks Lee Jae Wook's charisma to pull it off, he is servicable. I am mildly interested in the big revelation. The cast chemistry isn't there.

Haahahaha, Hwang Minhyun. Hilariously you can see his true personality peeking through in the drama. For his first drama, his acting is ok so far but I'm waiting see what's happens next with him

My hunch is that Ji so-hyun is the one who is blackmailing Ho-rang but it's just me guessing. Though the male lead's character is typical, I'm intrigued by the female lead's mask.