Sunbae Don’t Put on That Lipstick 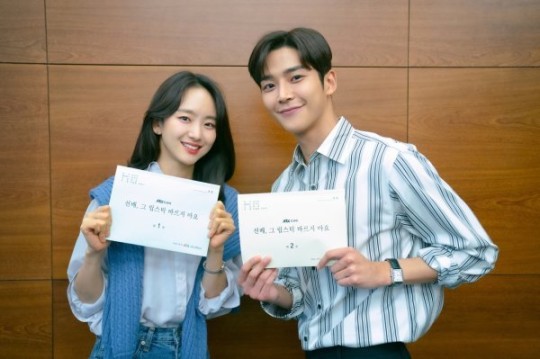 The first script reading for JTBC’s upcoming Monday-Tuesday drama Sunbae, Don’t Put on That Lipstick recently took place and stills have now been released featuring the cast and crew.

The drama is based on a popular webtoon by the same title, and stars Won Jin-ah (Melting Me Softly) and Kim Ro-woon (Extraordinary You) in a noona romance. The characters work together at the same cosmetics company and become acquainted when Kim gets assigned to Won’s marketing team. Naturally, sparks fly. And although Won Jin-ah has never dated younger men, she finds herself falling for Kim Ro-woon’s charms when he begins to pursue her romantically.

Lee Hyun-wook (Search) plays the marketing team lead, who comes from a humble background and doesn’t have much to his name. Having worked his way up for the bottom, though, he values hard work and has a mature aura.

In contrast, photographer Lee Joo-bin (Find Me in Your Memory) lives a carefree lifestyle as her family founded the cosmetics company where our main characters work. And her older brother Lee Kyu-han (Graceful Family) is the marketing director.

Written by Chae Yoon and directed by PD Lee Dong-yoon (20th Century Boy and Girl, Fated to Love You), JTBC romance Sunabe, Don’t Put on That Lipstick is currently set to premiere early next year in 2021. 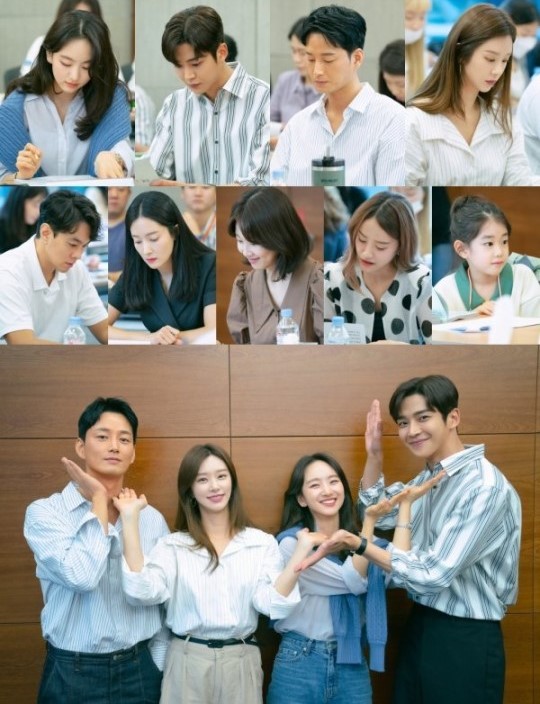 I hope it will be a better script than Search for Lee Hyun-wook.

Search is fun!!
It's has as many plot holes as strainer (I'm literally translating this expression from Spanish, haha), but it's a fun watch!

I'm kinda getting bored. It's always the same... One thing completely unlikely, soldiers wandering in the forest, a crazy old man doing something and the cycle restarts...

Oh, it's a only 10 episodes drama. I thought it will be 16 episodes. I want my bean ! I will watch the last 2 episodes. (the casting is looking very good at least :p)

@kurama if it were a 16 eps drama I would have dropped because, as you said, it's not much of a plot. But visuals are great... Jang DongYoon, Yoon Park, Lee HyunWook and even I can forget that Lee Ha Yul was one of those HW jerks that made uri YeoJin cry in FoS2.

Same here. Too much time in the forest as far as I'm concerned... And I'm not attached to any of these characters. Some are less irritating than others but frankly even the nicest ones are not a big draw. But I already invested too much time to quit. I should have given up at episode 4 at the latest instead of hanging there so I'll stick to it up to the end...
I'm currently watching 4 airing dramas, and the only one I'm excited about each week is the family drama Homemade Love Story.

I'm not familiar with either leads, but omg seeing Lee Hyun-wook 's name (and face) made me giddy. Crushing on him lately. Glad to see him in more roles.

OMG, I read your comment after I wrote mine.
Crush is the right word for me right now with LHW!

I wasn't really interested in this one even if I really love Won Jin Ah, but then I realized Lee Hyun Wook is here and I'm have no other choice but to watch. Blame it on him, and only on him.

I love these two so much, I would probably watch them in anything. WHOOPS, I hope I didn't just jinx us....

Gosh... that title looks one of the awkward and weird K-drama titles. I knew it will be one of my favorite JTBC K-dramas.

I think it looked like a potential rival to TvN's True Beauty (another upcoming beauty drama based on webtoon) when it's still ongoing True Beauty airing. Even though if True Beauty will end the run, then Sunbae will be the next True Beauty.

I hope it'll be one of the successful K-dramas based on popular local webtoons and even a good and wiseful ratings. So since I loved all of the cast, the writer Chae Yoon and even a regular popular PD, I'm in to watch!

The height difference between the leads is gonna kill me... And Won Jin-ah's neck too, probably.