My Roommate Is a Gumiho

Kang Hanna turns into a former gumiho for Frightening Cohabitation 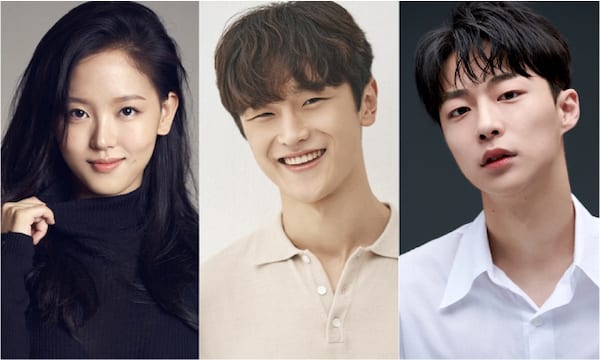 Jang Ki-yong (Born Again) and Hyeri (Miss Lee) have already been confirmed as the main leads. Kang Hanna is set to play Jang Ki-yong’s long-time friend, a former gumiho who is a vixen-like beauty. She seems like a perfect beauty, but her personality is a total contrast–she’s a complete heodang through and through.

Kim Do-wan (Start-Up) was previously confirmed so we’re officially getting a mini Start-Up reunion next year. Kim Do-wan will play Hyeri’s best guy friend. When he falls in love, he goes completely head over heels, willing to give up his liver, his spleen, any organ for his lady love. He’s cute, physically fit, and has an awesome personality. However, he keeps falling into the trap of being the weaker side of a romantic relationship. He’s set to have a loveline with Kang Hanna’s character.

Newcomer Bae In-hyuk (The Spies Who Loved Me) will play the third leg of the main couple’s love triangle. He has intelligence, wealth, and beauty, and he begins a one-sided love for Hyeri, because she’s the first person to reject his advances firmly. He’s her college sunbae, so I’m looking forward to a lot of funny campus hijinks.

Frightening Cohabitation is tentatively scheduled to air in the first half of next year on tvN.

I was about to freak out seeing Kang Hanna stuck in a 2nd lead position again but then I saw that she's not a part of the love triangle and my heart rate returned to normal. (Side note: that's apparently the only way the female 2nd lead can escape being written as a total bi0tch)

The supporting cast interests me much more than the two leads.

Why... I really don't understand how Kang Han-Na chooses her dramas. She was really good in Designated Survivor: 60 Days, can she have a lead role now? Or at least, not the second lead when the main actress is not a good one...

She doesn't get offered lead and does what she can with what she gets. A bit like Kim Seul Gi.

But so is Go Ah Sung and Moon Ga Young and many others...Fantagio did a poor job, her former agency...Key East is doing better I'd say.

Yes, Fantagio was terrible. Seo Kang Joon and the 5urprise boys are a testament to this failure. Go Ah Sung is doing good roles but if you see MGY, her roles seem a bit repetitive, especially since we know she is experienced enough to take on different roles

Looking forward to seeing Kang Hanna and Kim Do-wan as love interests, given I thought they had some sparks in their brief scene together in the Start-Up finale.

I'm wondering if that scene was thrown in as a gesture to this drama....

When I was watching Start-up, I wished there would have been more love lines between the characters of Kang Hanna and Kim Dowan. With the coming loveline in this drama, I hope my wish came true.

they were actually a low key crack ship of mine in start-up and the last episode scene of them together made me wish they actually did have more scenes together,, ahh i’m so happy they are reuniting in this and as love interests 🥰

Kang Hana keeps playing these 2nd FL and idk why. She is so talented but keeps playing 2nd fiddle to less talented leads. I don't understand, but ill check it out anyway.

I loved him and Hani in XX , glad to see him getting more roles!

I'm still bothered by the projects she takes on... she's pretty good, she's also charming, but still can't get a lead role.

Oh my gosh having just finished start-up I thought that last minute interaction between Kim do hwan and Kang hana was kinda cute I can’t believe they’re going to have a love line of their own!! I hope they have a really interesting dynamic

The male Gumiho sure have a habit of losing their beads in hot young women. Cheeky demons;)

Okay, I will tune in now. So, was the last scene with In Jae and Yong San a nod to this casting?

As much as I wanted Kang Hanna in a lead role, I'm happy that she is the second female lead with her own loveline. I'm happier that Kim Do Wan is going to be paired with her cause that moment of theirs in the last episode of Start Up made me smile. I'm looking forward to this show because of the second leads now lol.
PS: I may have started imagining how In Jae and Yong San's relationship would have gone after reading about this casting yesterday ( in my head, there was great scope for comedy and romance).

It'll be the next Tale of the Nine Tailed. (TotNT aired on the same network TvN) Not only this, but also it has TvN connection.

Another TvN connection was the two cast members who previously on this network that moved to the same network's K-drama (Kang Hanna and Kim Do-wan from Start-Up).

I hoped that it will be on Netflix like Start-Up did.

Kim Dowan and Kang Hanna looks good together at the end of Start Up. I'm happy they'll be team up for this.
I like the story I think I'll check this out.

Is this the continuation for Star-Up? woaaa ..

They should paired up Jang Ki Yong and Kang Hanna, that will be very interesting.

I was planning to watch this drama only for JKY and keep my expectation low for the FL. But having Bae-In-Hyuk casted in this drama heightened my interest a bit but his character will interact with the FL too 😌