A woman with a tragic past runs a realty business in which she exorcises evil spirits from properties. When she meets a conman with special psychic powers who may be able to help her understand her past, the two join forces only to find they are more connected than they realized.

A woman with a tragic past runs a realty business in which she exorcises evil spirits from properties. When she meets a conman with special psychic powers who may be able to help her understand her past, the two join forces only to find they are more connected than they realized. 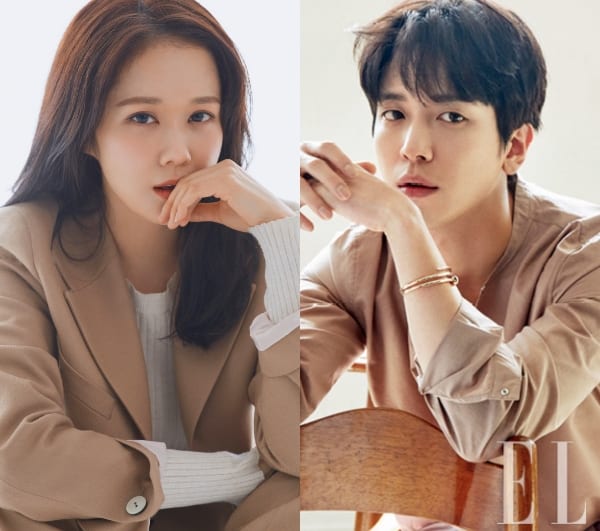 Casting for a new KBS drama called Daebak Realty is underway, and the main leads have been announced as Jang Nara (VIP, Oh My Baby) and Jung Yong-hwa (The Package). It’s about a real estate exorcist business that cleanses properties that have been tainted by ghosts. For superstitious folk, moving into a home where a previous tenant has died is a huge no-no, so this company is called in to exorcise it and restore a good spiritual balance.

Jang Nara plays the role of the real estate business owner/exorcist-in-chief. Her spiritual abilities are something she inherited from her mother’s side of the family. She seems perfect in a way, beautiful and intelligent, but she has a less than ideal tendency of letting her fists do the talking for her.

On the other hand, Jung Yong-hwa plays a realist who doesn’t believe in ghosts. However, he’s a con artist that uses made-up “ghosts” to swindle unsuspecting victims into wanting his services as an exorcist. The character has an extremely keen sense of observation and extraordinary deductive abilities that allow him to pretend as though he has a precocious sixth sense. Compared to Jang Nara’s character who is described as a cold, chic woman with a hot temper, Jung Yong-hwa is supposed to be a warm and friendly pretty boy with calculating edge.

Written by a team composed of Ha Soo-jin, Lee Young-hwa and Jung Yeon-seo, and directed by Park Jin-seok, Wednesday-Thursday drama Daebak Realty will begin airing on KBS in the early half of this year.

I will watch for Jang Na Ra but Jung Yong Hwa, bless his pretty face is a terrible actor, but my love for Jang Na Ra is stronger than my distaste for his lack of talent.

What else can I say? My exact thought!

I'm with you! I got burnt with Mirae's Choice and haven't watched JYH ever since. But hopefully his acting has improved. I also prefer his old teeth...

My fav JNR drama is Babyfaced Beauty. I didn't like Daniel Choi at the start of the drama but I love him (or maybe his character) by the end of it!

Mirae's Choice was bad but not because of the actors...

Love Jang Nara so much that I’m really looking forward to this. I hope the writers and director are good. As for Jung Yong Hwa, to be fair, I haven’t seen any of his dramas so I’m planning to watch a drama of his. Any recommendations?

Maybe you can try The Package.

Thank you! I will try and watch it!

I like Jang Nara, but I am not sure even she can overcome the black hole of wooden acting that is Jung Yong Hwa. He was always bad, he has not gotten better, but he must be a "hard worker" or something because here he is again. Sigh. And they have given him a fairly complex part, where he has to portray a character that is in turn a type of devious actor... no, I do not see this working.

Oh wow! I thought he is ok! I’m more curious now. Hopefully it will work. He’s been acting for awhile now. He should improve! Fighting Jung Yong Hwa!

Oh, come on. He was cool in The Package. And he looks very cute... try to give him a chance, poor boy... 😅 he needs to be acting if he wants to improve😅😅😅

I watched him Sad-Sack his way through You're Beautiful, Heartstrings, and Mirae's Choice, and he got on my last nerve every time. He's 31 now, no longer a boy and reportedly worth about $30 million so I do not feel the least need to give him any more chances, the rest of the world has given him plenty.

You have a point!
But see how interesting our drama experiences shape our opinions on some oppas. I watched you are beautiful paying so little attention, that when I watched The Package I didn't recognize he was in you are beautiful too. I just couldn't. (I didn't like you're beautiful, by the way, but because park shin hye had this dead fish look when being kissed, because she was crying all the time and because I felt the drama was toxic, when I didn't even know what a toxic relationship was at the time).
But anyway, I didn't watch Heartstrings or Mirae's Choice at all...
You could tell I watched him for the first time in the package and I found him cute, funny and even hilarious... so I would be ok watching him again..
But I won't. Not even loving Jang Nara how I love her, because... This drama is about ghosts and I don't watch anything that has to do with occult.
In regard to you: I also respect your opinion, of course.

Those are all pretty old dramas. Yonghwa was great in both The Three Musketeers (2014) and The Package (2017) so you might want to give him another chance. He's got good comic timing and being a musician he's also very coordinated so he's good with action. Plus he just got out of the army last year and he's, um, matured physically : )

I love The Package! Ive watched it twice and I thought Yong Hwa did a great job in it. Shrug.

I too will watch for Jang Na-ra

if you haven't seen The Package you might not realize that Yonghwa has grown into being a very good comic actor. You're Beautiful was more than 11 years ago so you might be due for an update

Real estate exorcists? Taxicab vigilantes? Track-suited demon hunters? Korean mafiosos...in Italy? Have kdramas always had this nutty vein and I never noticed or is this something new because of the increase in content providers?

Real estate exorcist business...
I have seen something similar somewhere...
Was is A Korean Odyssey? Bring It On, Ghost?
It seems like dead people's soul/ghosts theme dramas keep on coming...

Korean Odyssey had a an exorcist realtor yes.

Yup—the Hong Sisters referenced real estate exorcism towards the end of MASTER'S SON (2013) and then fully explored (recycled?) the concept in A KOREAN ODYSSEY (2017).

I'm curious about this couple. I loved each of their last drama Oh My Baby and The Package (Yonghwa with the chastity belt was so funny xD).

I really liked THE PACKAGE and I thought that Yong-wha did a good job with his character in that show.

I wish Jang Nara would get paired with an actor closer in age, like Namgoong Min, Kim Ji Suk or Lee Sang Yeob. She would be great opposite them. I liked it when she was opposite Go Jun and Lee Sang Yoon.

Exactly my thoughts. I would love to see her with Namgoong Min, or Jo Jung Suk, or Kim Dong Wook. She has both a great comedic timing and a graceful maturity that I feel will go very nicely with these actors' acting style.

Agree! But can we have Jang Hyuk again with her. I think she has the best chemistry with him.:)

There was a drama, a one hour piece, with Jang Nara And Jang Hyuk, involving a sad “time loop.” Episode 6, 2014 MBC Drama Festival. Interesting little story - give it a try if you like both actors.

@hebang I watched it back then. It was sad, and left me a bit bewildered. Like I had watch two random episodes of a longer show... I guess I'm not a good audience for artistic ambiguity 😅

I feel like dramas typically work better when the actors are closer in age. I'm guessing with Jung Yong Hwa's casting that the male lead role may not be as prominent or juicy as the female lead role. The old, better actors are probably getting multiple offers at a time and they're looking for roles where they can shine too.

Just a side comment that Ms. Jang's photo up above has been 'massaged' to the point where it no longer looks like the Jang Nara we all know. When I read the headline then looked at the photo my immediate thought was 'But why have they posted someone else's face over the story?'

You are right about the photo- Jang Na-ra has a very distinctive beautiful face and this picture makes her look like an ordinary "Standard Model" Korean actress.

Isn't this a noona romance?? Why on earth do they have to put ghost in it???😖😠

Why not? It provides a theme to build the story around that has comedic possibilities.