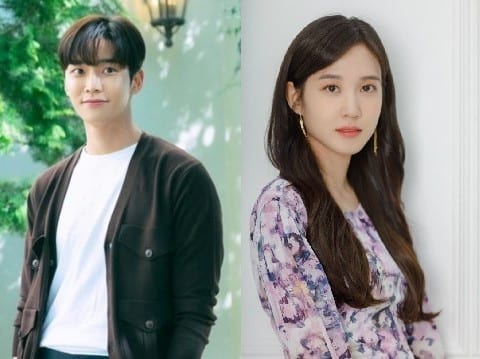 A new sageuk is being planned on KBS called Affection and an offer has been made to Kim Ro-woon (Extraordinary You). If he accepts, he will be joining Park Eun-bin (Do You Like Brahms) in a leading role. Kim is currently starring in JTBC’s Sunbae, Don’t Put on That Lipstick, which premieres today, but that obviously isn’t slowing him down. His agency confirmed that he received the offer and that it’s among one of several projects that he’s reviewing.

The story for KBS’s Affection is based on a popular manga by the same title (written and illustrated by Lee So-young) and tells the tale of a secret king that was hidden from Joseon history.

In a gender bending role, Park Eun-bin takes on the central character of Lee Hwi, the Crown Prince (and soon to be King) of Joseon. For reasons not yet known, she lives disguised as a man and is described as being beautiful but mysterious. She keeps her emotions well-guarded behind a poker face, but internally, she’s constantly stressed from continuing to live a lie. Each day is a struggle between her public self and her true self and identity.

If Kim Ro-woon accepts, he will be playing Jung Ji-woon; he is Park Eun-bin’s teacher and first love. He has a happy personality, always wanting to have a good time, and has a high regard for aesthetics and beauty.

Written by Han Hee-jung (Clean With Passion for Now) and directed by PD Song Hyun-wook (Another Oh Hae-young, Beauty Inside), KBS sageuk Affection is currently in the planning stages and will air sometime next year.

I love Park Eun Bin and she's a great actress. Rowoon was pretty good in the little sageuk part in Extraordinary You.

Clean With Passion for Now was good until the writer decide to use the separation trope with the FL being cruel... The addition of the second lead was useless too.

So I hope this time we won't get useless characters and stupid tropes!

Love Park Eun Bin too and was crossing fingers for her to be cast opposite Kim Seon Ho. It would be a clash of the scene-stealers and dimple-thon.

I also love Park Eun-bin but am a bit skeptical about this plot.

Will try for Park Eun Bin, but hmmmmmm

writer-nim/PD-nim hasn't worked for me before.. but Park Eun Bin... sigh..
and now after one ep of Sunbae Lipstick, I seem to like Ro-Woon too.
be good, show.. be good.. puleeese...

Just wary about the writer but I hope they both accept!

So many actors up for new projects before their current one even airs.

There is a lot of sighing in this thread. 😂

I guess for me this is a no-no. I'm all for crossdressing scholars, eunuchs, and warriors, but I can't imagine a crossdressing king. How will she avoid the watchful eyes in the palace? Joseon kings can't even go to the bathroom without it being recorded! How will she produce an heir? 👀 So I'd hardly call it a sageuk, more like a costume romance in the style of C-dramas (nothing against those, but after watching several of them they all seem the same). Sigh.

She is amazing in sageuks and I should be happy but this is a waste of her talents.
What's with all the cheap dress-up sageuks these days? It's too bad the locals didn't appreciate NOKDU FLOWER and HAECHI.

Preach...my (probably vain) hope is that with all these miniseries sageuks kbs is rolling out these days, they're testing the waters for a longer, more ~serious~ sageuk.
Call me a party pooper but I'm tired of these silly comedy not-really-sageuks. I definitely like some lighthearted moments in a sageuk (I think Kim yi young actually does this well, injecting humor in an overall serious drama without it being jarring), but these floppy costume parties these days ain't it.

@wishfultoki,
AFFECTION will probably be a no go for me also.
I am eagerly awaiting RIVER WHERE THE MOON RISES (Viki-US) with episode one airing Feb. 15th).

I can’t decide if this will be a farce or not. Which brings me to a philosophical point about sageuks in general: how historical does it have to be to be called one, and how much was cross dressing in that time occurring that we have all these kdramas depicting it?

I don't think there is an answer for your first question. The term "fusion sageuk" is very broad so it can include everything that comes out nowadays. All of the dramas I've seen are fusion sageuks: about real and/or fictional characters in a historical setting.
Personally, I like to learn about history through dramas, so if they are set in an unidentifiable past and its elements seem too modern, then I don't see the point of watching.

The theme of cross dressing or not isn't the point. If it depicts the story of people from a different time, it could be kings, queens or peasants and either accurately depicts or completely changes some events it'll still be a sageuk. Example, Reign is still a period drama.

It reminds me the legend of Pope Joan.

We got a King whose face no one knew, I guess the intim part is not unbelievable :p

@wishfultoki,
O/T I believe you have been watching SECRET ROYAL INSPECTOR.
I have not been watching since I don’t have an iQIYI subscription.
One reason I wanted to check it out was to catch Lee Tae-hwan who I have not seen in a drama since W-TWO WORLDS (2016). (I first saw him in the wonderful PRIDE AND PREJUDICE (2014/15) and have a soft spot for him since but have not seen much of his work.)
Any thoughts on his performance in SRI so far? I know he has previous sageuk experience from being in HWAJUNG.

@marcusnyc20,
Yes, I'm watching SRI (another fusion sageuk not set in any specified reign). Lee Tae-hwan plays L's younger half-brother, which is funny because he's much taller than his "hyung". He hasn't had much screen time but he sports a very nice Mane of Glory and sounds at home in Joseon. He has gravitas as well.

I am also enjoying L's performance so far. As Kwon Nara observed in their interview, L seems "soft" (I understood this to mean soft-spoken, physically on the weak side). Plus, the character is supposed to be a bit of a loser; he can be pedantic and dumb. Kwon Nara noticed, as I also did, that there are moments when L's characters surprises us by showing more charisma, with sudden strength and firmness of voice. (Sorry, you didn't ask about L and I digressed, but he gets such bad press on DB that I wanted to highlight the good aspects of his performance).

I don't have a subscription to iQIYI either. I watch it for free on their website, with no ads. Are you sure you can't watch it in your region?

@wishfultoki,
Thanks for the review. Tbh I haven’t tried to watch anything yet on iQIYI. I will have to explore it better but my days of ads have been over for a long time.
I have never been as down on L like others but then again I am generally an easy marker if you get my meaning. Looking at my log,
L’s RULER: MASTER OF THE MASK was my third sageuk. My first sageuk exposure was the historical part of THE LEGEND OF THE BLUE SEA.
Then came HWARANG. So with RULER a lot was still new to me. One thing I remember about L’s performance was that he seemed to slouch. I kept thinking, “c’mom man, stand up straight”. Lol.
Anyway I thought in SRI being around Kwon Nara would be a plus for L. I really enjoyed her performance in IC where I think her part was shortchanged but that is a story.
Thanks for the LTH snapshot.

It sounds like a great role for Park Eun-bin to grow/ show her acting chops. I'm excited for this!

(1) I realize Kim Ro-Woon is a towering young man by Korean standards but will he ever star with an FL taller than Kevin Hart?

(2) "Lee Hwi" is the second fictional prince in the last few years -- is there a significance to the name I am missing?

(3) I skipped Extraordinary You because, it seemed a bit young for me and because having seen W: Two Worlds, I thought "how much can be done with this general premise?" but now knowing that it has a substantial saguek sub-element (Thanks Kurama!), is this one worth watching for someone who came to kdramas with sagueks like Jang Geum, Yi San and Dong Yi, and prefers straight-faced adult melos?

(3) Are you asking about EXTRAORDINARY YOU? It's very much a high school drama, though being about characters in a comic gives it an interesting twist. I would say the sageuk part is important to the overarching story, but it's mainly composed of 2-3 scenes, which is not substantial. I don't think you will enjoy it if you compare it to serious sageuks, but if you're looking for something light with lots of tropes and BOYS OVER FLOWERS meta, it is a good choice.

Thank you for the clarification -- I was right to pass in the first place. I understand it was well received and has plenty of admirers but I am confident it is not for me.

No. 2 I believe refers to Yoon Shi-yoon’s GRAND PRINCE (2018)
which was my second sageuk and first YSY drama. He is now one of my favorites. I have followed him to his four dramas since.

Correction. I am losing it. GP was my fifth sageuk.

To your first point, I 100% agree, but Wikipedia has him at 6'3, which is tall by anyone's standards, but they need to find actresses taller than 5'3 to his doesn't look like a giant, even in his new drama, he towers over everyone.

As someone who is 5'9, I agree with you but the "average height" for an NFL quarterback is 6'3 and I have half a dozen non-Korean in-laws who are 6'5 or taller so I habitually use the "Korean standards" qualifier when mentioning height, lol.

Oh I jumped the gun. It will air next year. T.T

Staying optimistic for Park Eun Bin. She's been choosing interesting roles lately. Hope this one does well. But I would also love her to be paired up with Kwak Don Yeon. That boy deserve a lead role!!!

@neener I was really annoyed. Hahaha!

I can feel it lol

I can relate. My iPad has a mind of its own. It is a constant battle to get Korean names spelled correctly. Ugh!

He will be in Vincenzo as a villain for now. I want him in a lead role too! He was great in Moonlight as a warrior/bodyguard.

He's still underrated. He needs to be in a lead role. I mean, he was in Never Twice but a romcom :(

But his love story in Never Twice was the best part of the drama, the other characters being uninteresting...

I actually just watched for him and Park Se Wan. They were so cute!

The height difference reminds me of Lee Tae-hwan & Park Eun-bin in their previous weekend drama that I did not finish...

Not really a fan of the writer but might check out because of Park Eun-bin, it also doesn't hurt to see more of Rowoon.

I know PEB is an amazing actor but...disguised as a MAN? How am I gonna believe that? If it was Choi Ara, I would have immediately given into the plot but here....the plot is asking a lot!