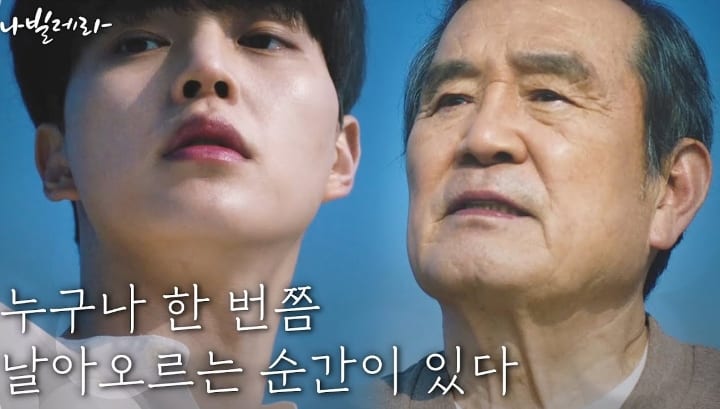 Ballet drama Navillera (formerly Like a Butterfly), featuring Song Kang (Sweet Home) and Park In-hwan (Brilliant Heritage), has released two versions of the same teaser. Park In-hwan plays a 70-year-old man that is just beginning ballet, and Song Kang plays a 23-year-old ballerino who is hesitating at the cusp of his dream.

Based on a highly popular webtoon by the same name (authors: Hun, Ji-min), Navillera tells the story of how an elderly retired mailman decides to finally gather courage and pursue the small dream he’s always kept hidden throughout his life: ballet. When he meets Song Kang’s character, a precociously talented ballerino who has started to stray from his craft and calling, they become an odd older student-younger mentor pair.

In the teaser narrated by Park In-hwan, Song Kang extends his arms as Park watches from behind. The music conveys hope, wistfulness and a complex desperation. Park In-hwan admires Song Kang’s graceful turn. Song Kang continues to wave his arms, and Park In-hwan thinks: “For everyone, there’s at least one moment in their life when they’re given a chance to fly.” In the last scene, they’re shown together with Park In-hwan following Song Kang’s movements.

Song Kang’s teaser is almost the exact same as Park In-hwan’s. The major difference is the change in music. The background melody is much simpler, and it almost sounds more playful and innocent. Song Kang says the same narration, and in the last scene, he and Park In-hwan raise their arms together and join hands. 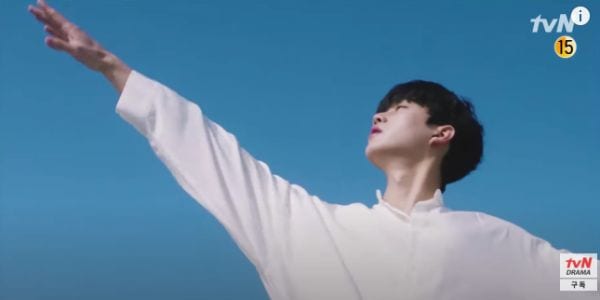 I've seen the small first teaser that tvN released(not posted yet on their channel) and this for sure looks like it will be such a heartwarming drama.

My only concern is that I'm not a big fan of Song Kang but I didn't watch his last drama. I wonder if he learnt classical dance before.

I've only seen him in Sweet Home and loved him (quitted Love Alarm on episode 3). My main concern is also if he's learned some ballet. Just for the teaser I don't feel he's a dancer, tbh. The cuts are too close and made to "fake" the dancing.
I also think this could be a really warm drama, but I have to believe he can dance before. I don't buy it with this teaser.

You can't really fake grace in dance. And I think it's harder for men.

I still remember how surprised I was by Shin Hyun Soo in Twelve nights. Just in one movement, the way he moved his arms, I knew he was a dancer, so graceful. I couldn't see it in Song Kang.

I'm not a dancer, but even I wasn't getting "dancer" vibes from the teaser. I guess we could wait for more promotional material.

Song Kang has said he studied ballet for six months and immersed himself in the ballet world before beginning his role in Navillera to prepare himself. From what I have seen so far, I’d say he did a pretty decent job of it!

He’s beautiful in this. Love hearing how devoted an actor is for the role he’s going to play.

This is my first time hearing of this drama, but I will definitely be on the lookout for it. It sounds really heartwarming.

Hmmmmm... I think I'll give this one a try when it come out hehe

I love Park In-hwan and Na Moon-hee.
And I love dramas with regular people.
Recently there are so many super power, fantasy, serial killer, suspense, time travel, body swap stuff... I'm sort of tired of them.

But I have to say, ballet is sooo hard to fake (I love ballet).
I am not sure how much Song Kang can pull it off... But I'll definitely check it out.

It would be the senior version of Angel's Last Mission: Love. As based on what I saw on both teasers, the acting performances looked like turning into powerful acting masterpieces. Song Kang did balanced his ballet performance and I hope Park In-hwan would be same as Song Kang as his dancing (ballet) skills and he should exercise to balncing to get trying his thinnest weight even he's now in senior/old age.

I will be watching this but I will have to suspend my disbelief a lot to do so.

I am not an expert in ballet but I do know this much: it is very hard on the body. Ballerinos and ballerinas suffer injuries because of the stresses placed upon their feet, ankles and knees (backs and hips as well). When they are injured they see the same sports medicine doctors that would treat an NBA basketball player. A ballerino is as much an athlete as a dancer. In this sense Ballet is different from all other kinds of dance.

Is it practical or possible for a seventy year old man to do this? I have my doubts but perhaps someone can enlighten me.

But I will watch this show anyway.

There are adult ballet classes, specialized in adults. I know this because a friend (who's in her 40's) attended a special class. Having said that, 70 are no 40. I'm also cautious.

In one's 40's it can still work- and your friend would not have to push the limits. At 70- even if you are in good physical condition otherwise- it would be a lot tougher. But even if it seems implausible it sounds like a good story and I have liked ballet since my parents took me to see SWAN LAKE when I was eight years old. So I will be watching this anyway and I hope that no one took my comment as reason not to watch.