More promos have been released for SBS’s new sports drama Racket Boys, including new stills of Kim Sang-kyung (Miss Lee) as well as a video teaser featuring the rest of the main cast.

In a sweet and comedic coming-of-age story, the drama takes place in a quiet farming village on the outskirts of Korea where we follow a group of teenaged badminton players who dream of becoming the next “idol group” for their sport.

Alongside Oh Nara (United Effort to Accomplish One Thing), Kim Sang-kyung takes on the role of badminton coach Yoon Hyun-jong. A friendly, but cheeky and sly character, he once had the honor of playing on the national badminton team in his own youth. Later in his career, he made money by working as a personal trainer in the city. However over the years he becomes fed up with pandering to clients, and he relocates to the countryside with his daughter and son Tang Joon-sang (Crash Landing on You) in order to start a new life.

In the newly released teaser, we get our introduction to the village’s youth badminton team through the conversation between Woo Hyun (Law School) and his friend. Woo wonders, “Hey, where did those kids go, the ones who play ‘minton’ or ‘ranton’ or whatever you call it?” And his friend responds, “Oh, them?” Cut to Kim Kang-hoon (Mouse) who the men describe as, “The youngest one with big eyes and tanned skin, he’ll be playing computer games again.” Sure enough, Kim sits with his teammates at a PC room as he curses at them. The captions introduce him as: “Too-much talker / Lee Yong-tae.”

In an ongoing sequence of shots, we see the young teens interacting with each other while the older men continue talking in voice-over.  “There’s the one who’s always glued to his cellphone,” says one man, referring to Sohn Sang-yeon (FAILing in Love). The appearing text on the screen explains that Sohn: “Likes being center of attention – Opinionated / Bang Yoon-dam.” The two men next talk about Choi Hyun-wook (Taxi Driver), explaining, “There’s also the one who sticks next to them all like gum.” The captions label Choi as: “Sweet – Affectionate / Na Woo-chan.”

Moving onto Tang Joon-sang, the men go on that, “In addition, there’s also the new coach’s son. There’s a lot of fuss and complaints about whether he is or isn’t going to be playing ‘minton.” Curiously we first see Tang training on a baseball team before he tries and fails to hit the shuttlecock with his racket. Choi Hyun-wook and Kim Kang-hoon watch Tang and try not to laugh. Tang angrily declares, “It’s me, I’m Yoon Hae-kang!” while the captions indicate that he is: “Full of false bravado / Yoon Hae-kang.”

The two older men gossip, “They say the ‘minton team is in danger of being disbanded. Do you think they’ll actually be able to play?” As they speculate, the camera pans over the awkward group, this time  including the female players: Lee Jae-in (Undercover) and Lee Ji-won (The Uncanny Counter). The teaser comes to a close with the boys back in the gym, assembled in a group huddle. When Tang Joon-sang becomes the odd one out in the team chant, he turns his back on them in a sulk. 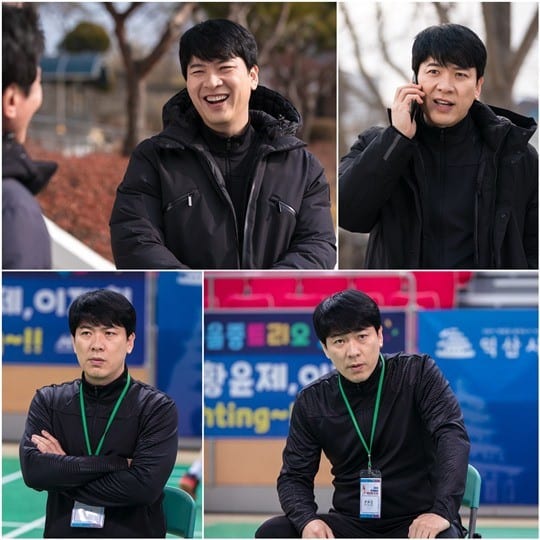 This one looks promising, but I’m not sure if I’ll pick it up when it’s aired since my heart hasn’t fully recovered from Navillera.

I normally don't like watching teenagers but this looks good.

This will probably be super wholesome. Will definitely give it a try, especially since the writing and directing team is strong.

I'm excited about this show.
And this is going to be on Netflix.
I'm sort of tired of serial killers, ghosts, crazy science fiction stuff or makjang.
I'd love to see a drama that have regular people doing regular stuff.

Choi Hyun-Wook was great in Taxi driver (ep.3-4). It would be nice to see him doing something completely different.

Totally agree. Some normality is in order and I can't wait to watch this one. Pil Gu so cute in the teaser!

It's making me think of Dance Sports Girls/Just Dance. If it has even half as much heart as that drama, then I'm in!

I am definitely in for RACKET or RACQUET BOYS. I am looking forward to hanging out with these goofy kids (and adults).
Also o/t I will be watching one of RB’s kids Tang Jung Sang concurrently in Lee Je-hoon’s MOVE TO HEAVEN. That should be interesting to see his different performances.
It looks like both dramas will be on Netflix (I hope).

I'm a 29 year old female. A British Pakistani and I've been watching Kdramas since 2015. I'm on episode 2 at the moment and I'm loving this drama so far!! So wholesome and cute. Hollywood dramas just don't know how to deliver wholesome and cleans dramas anymore. Thank you Kdramas. Please keep bringing us quality content :)