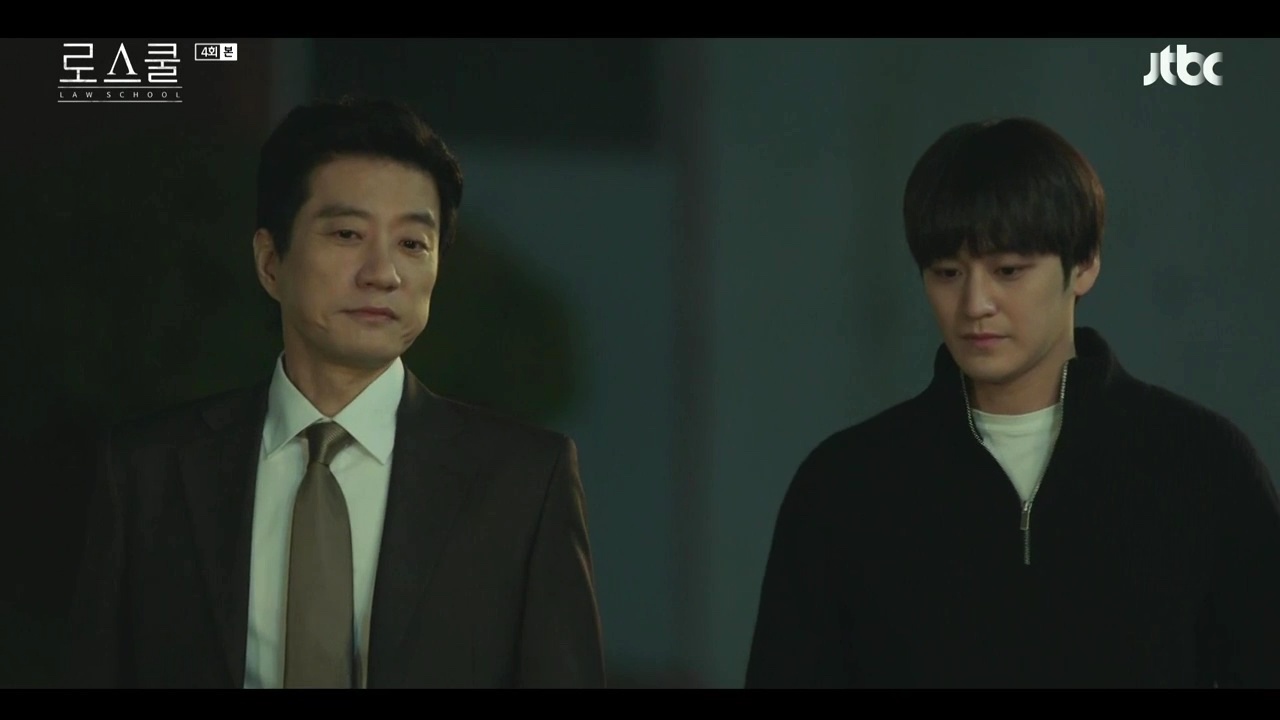 Things get even more tangled, as the murder case goes from having one suspect to two. Meanwhile, gossip and speculation run rife on campus, the real world continuing to intrude into the classroom in very uncomfortable ways. As usual, almost everyone is lying, and each reveal tells us more about what makes each character tick. 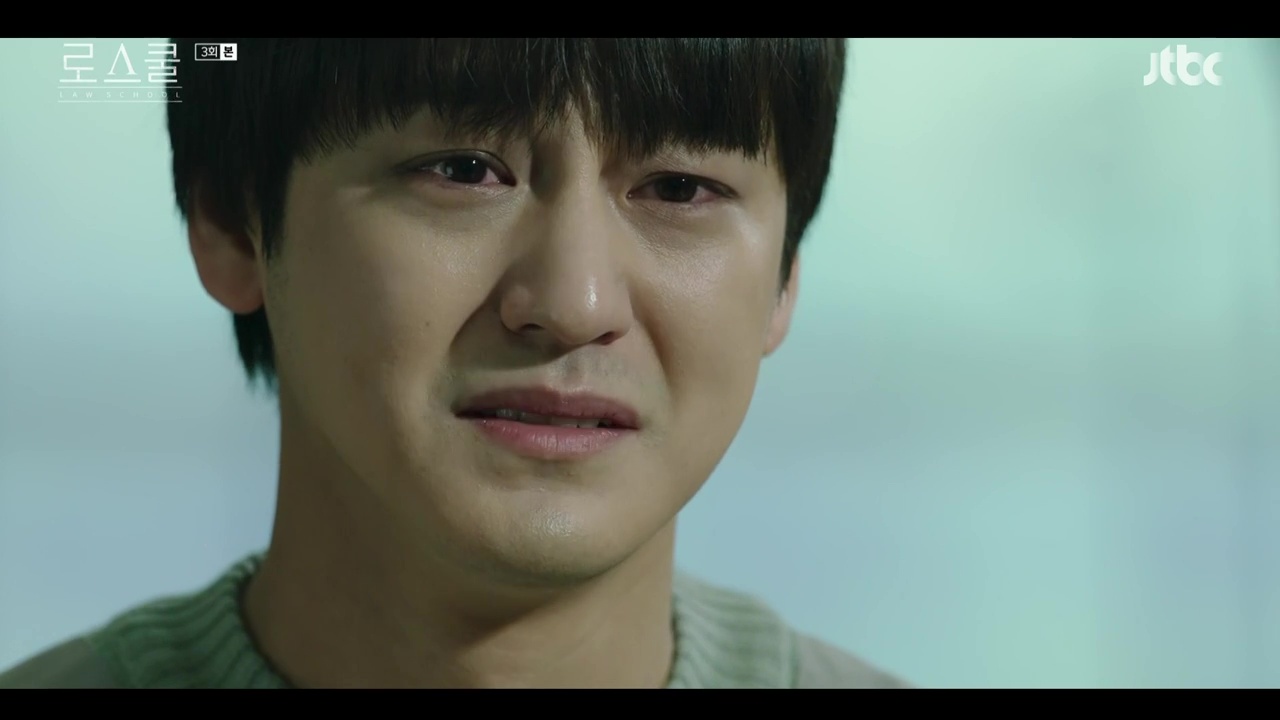 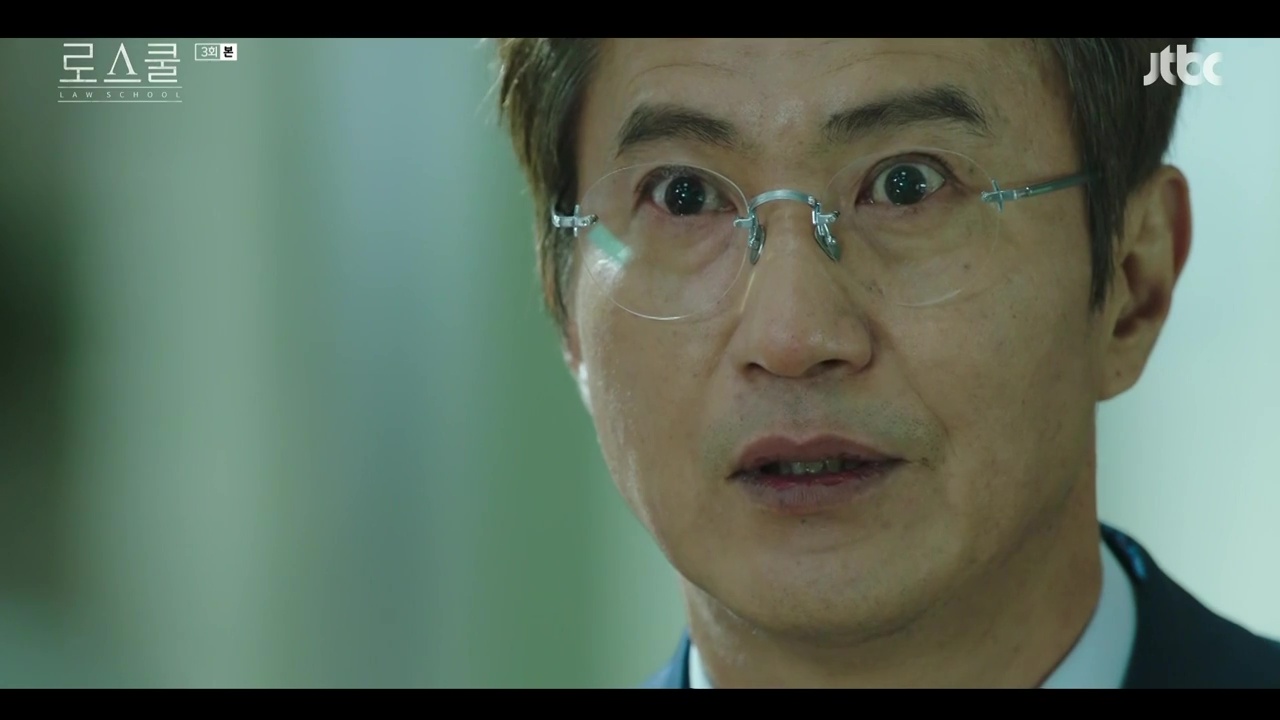 These episodes were as full of twisty and fast-paced developments as last week’s, and now we know the characters better, I find myself quite invested! I was glad to see that Joon-hwi’s enigmatic withholding was simply part of his plan to divert suspicion from Jong-hoon. His private disappointment and grief over his uncle came across really well in these two episodes. And color me fully unsurprised at his aunt’s shady scheme to steal Joon-hwi’s inheritance—it was obvious she cared more about the money than her dead husband. I’m only sad that he’d already signed away his share by the time Jong-hoon exposed her.

I LOVED Sol A acing Jong-hoon’s questions—and his exam!—after we saw her incredibly rough start with him in Episode 1. She seems to be the kind of student who only applies herself when she cares, and she’s become highly motivated to do well in Jong-hoon’s class. We also got more of her backstory, and as expected, her twin sister Dan is either dead or just missing, and Sol seems to be attending Hankook Law in place of her sister. 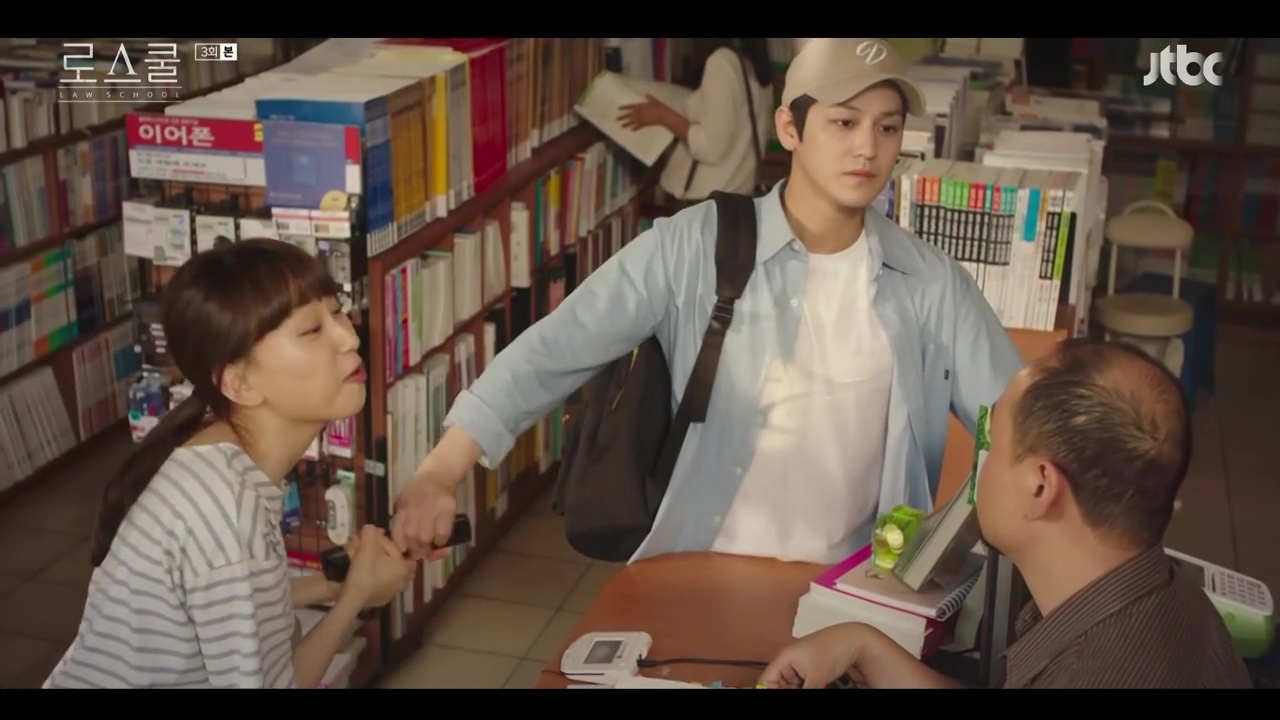 That meet-cute fleecing in the bookstore probably means Sol A and Joon-hwi are endgame. Sucks to be Sol B, since it’s unclear whether Joon-hwi returns her obvious crush. (And Sol B’s username AnotB confirms exactly the disgruntled vibes we picked up on last week! I laughed. Although it became less funny once I saw her nightmare of a mother.)

Speaking of the other students, we’re getting to know them better. SEO JI-HO (Lee David) keeps his cards to himself, but is gunning for Joon-hwi’s top spot. There’s something off about former med student YOO SEUNG-JAE (Hyun Woo)—why does he have Sol B’s computer, and how many stolen laptops are there around here? Perhaps it wasn’t the best idea to give everyone identical ones. JEON YE-SEUL (Go Yoon-jung) seems shadowed by an abusive boyfriend while MIN BOK-KI (Lee Kang-ji) looks puppyishly on. Then there’s vulture-like JO YE-BUM (Kim Min-seok), who takes pleasure in spreading malicious gossip. 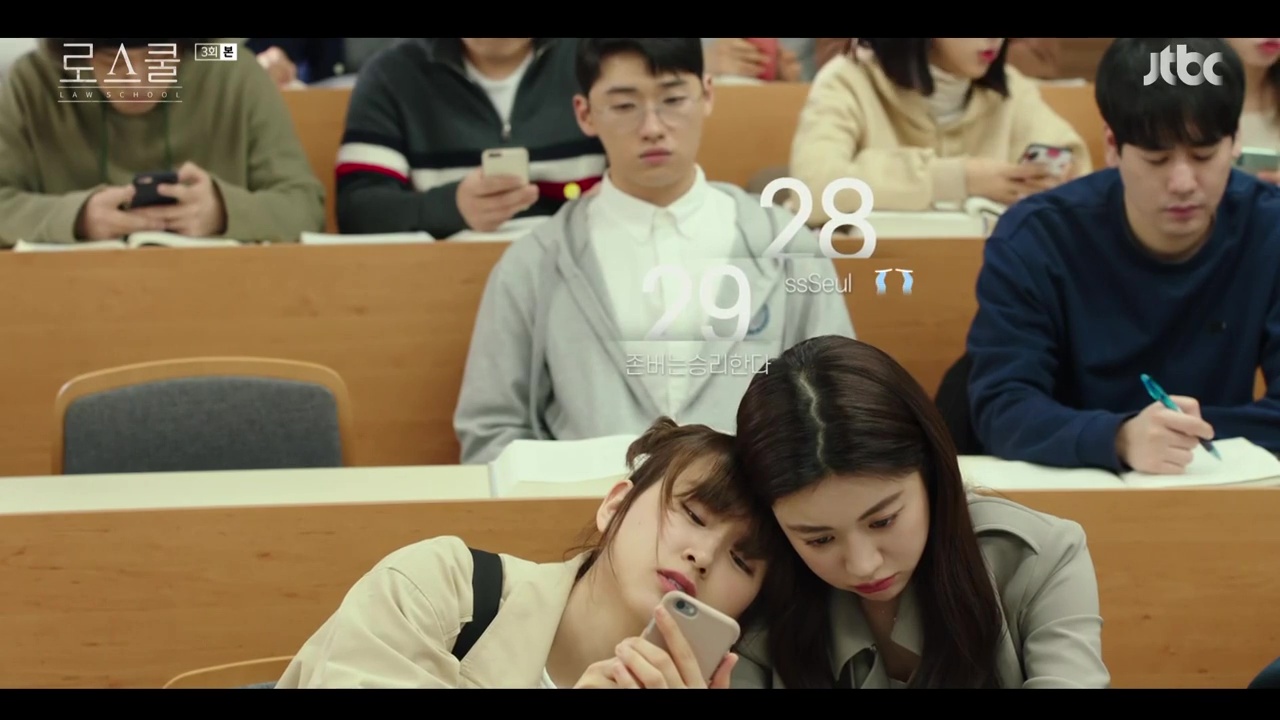 There are layers of tension here, each bumping against the others to create an incredibly stressful atmosphere for students. The hyper-competitiveness inherent to a program where only half will succeed—those secret-but-not-really exam scores floating above their heads were painfully real. Someone they see every day killed their professor while they were in the same building, and the university is doing THE MOST to act as though everything is normal. On top of that, the murderer is still lurking among them, walking around carefree on campus.

Jong-hoon’s return to school right after his stabbing, and his insistence on making the students debate his and Joon-hwi’s innocence, reminds me of Sol A’s distress at her classmates’ blase attitudes after the murder. Jong-hoon makes a similar point by refusing to allow the grind of the academic machine, which certainly isn’t motivated by truth or justice, to chew up and discard anything that would disrupt the status quo—and status—of this elite institution. 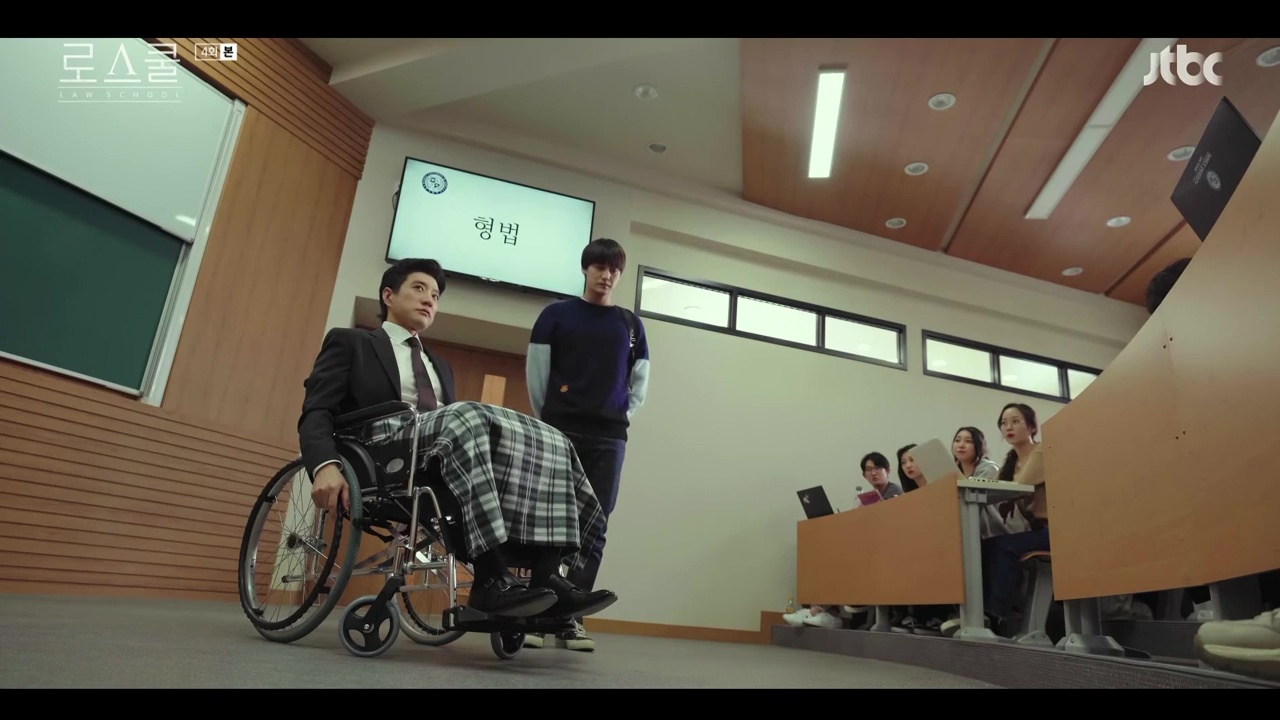 Jong-hoon thrives on forcing his students to face unpleasant and uncomfortable aspects of the law, because he has intimate experience of the fallout from a clash of ideals and reality, especially when you add personal friendships and corrupt double dealing to the mix. Better for them to encounter it first here, in the safe(ish) cocoon of law school, than as practicing lawyers and prosecutors, with the power to destroy people’s lives. As Jong-hoon tells Sol A, they shouldn’t strive to understand Supreme Court rulings, but question them.

I love that he’s this kind of teacher. He doesn’t teach the law as a rigid set of theories, precedents and statutes; he treats it as the living, evolving and corruptible organism it actually is, and reminds them sharply and repeatedly of the consequences that has for real people. Even if it means brutally exposing his own (and Joon-hwi’s) vulnerabilities to the entire class. (And his methods are clearly effective, given how willing his students are to do various off-the-record detective work for him.) 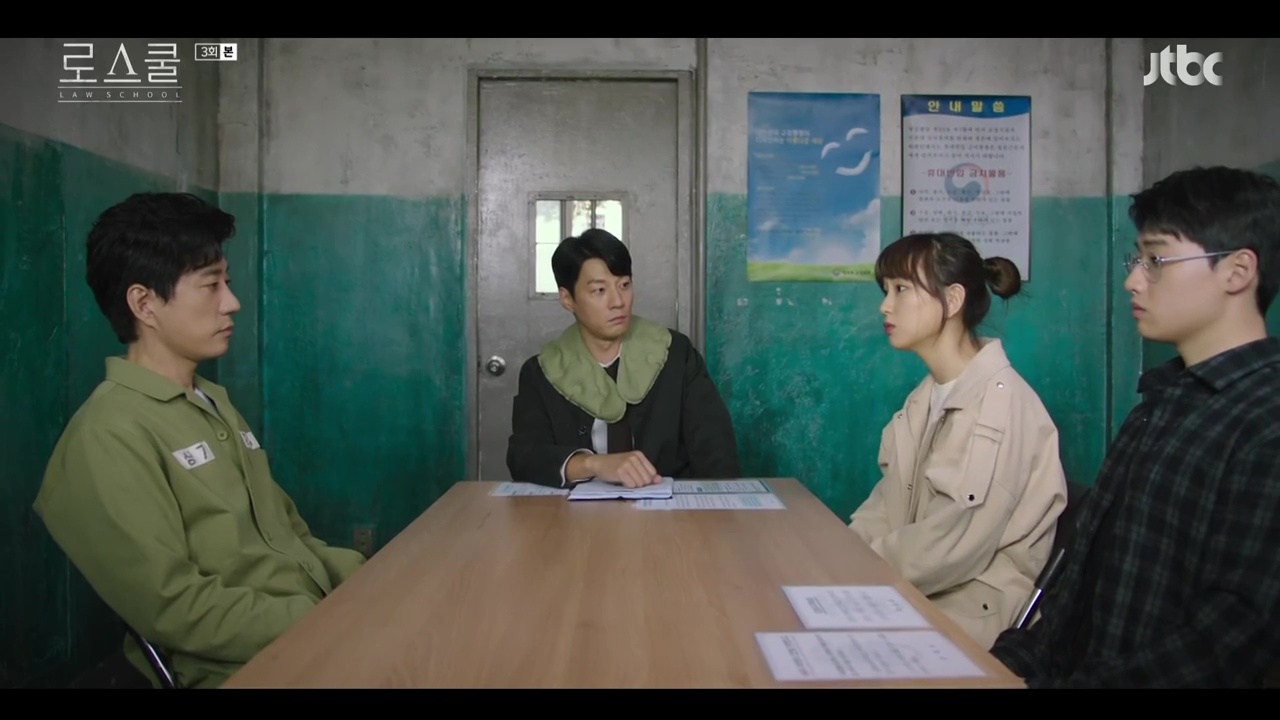 But. Sigh. Still too much of the pedophile. WHY is he living across the street from Sol A’s mother and adorable sister? Why are we being subject to him creeping on poor little Byul from the window? Why is he getting increasingly entangled in these people’s lives, having confrontations with Joon-hwi and saving Jong-hoon’s life? I understand wanting to challenge the audience with the the extreme nature of his crime, and question how society can deal with such people besides simply locking them away forever. Intellectually, that’s a legitimate debate, but the aggressively vile and predatory portrayal of this character feels gratuitous.

Not to mention, the drama is piling this unwieldy, major theme on top of an already complex plot that’s essentially an unsanctioned remake of How to Get Away with Murder. So no votes for that. But I’m here for the rest of this entertaining mix of soapy drama and witty banter (did anyone else get sudden Aaron Sorkin vibes from the vice dean’s walk-and-talk “discussion” with Eun-sook?). And now we know who stole the laptop, and possibly why! Waiting for next week to see if my theory that the vice dean is actually Sol B’s father is correct. *rubs hands together*

Just a heads up: this is still Laica, but I’ve changed my display name to Anisa. 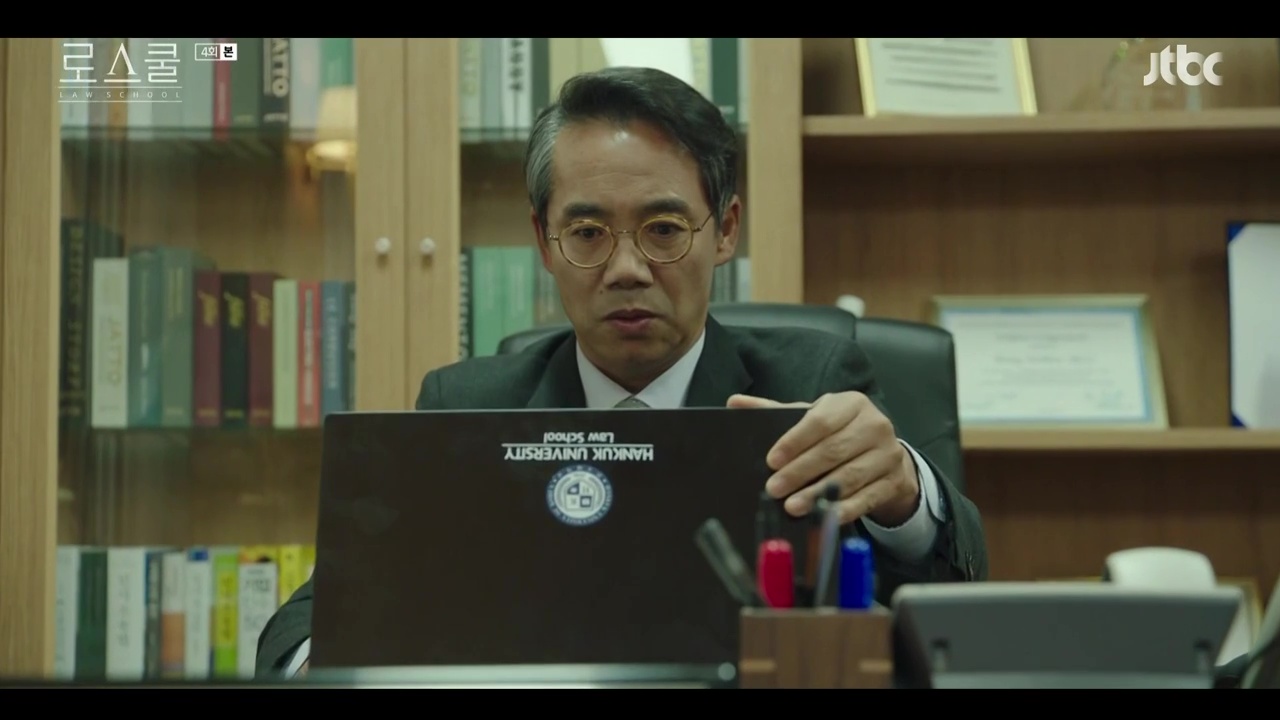 This drama is so fun, am I the only one who's enjoying it? I wanna be in professor Yang's class too. So much is going in this drama, we still don't know the story behind every character and I love how yang is not only after solving who is the killer but for him, it's more like saving a puzzle, it's his hubby after all, you know.

Lol, me too! I like the mystery of it all. Not to mention the wonderful cast that's doing a fabulous job. Personally I don't find it particularly confusing like others have felt...

You are not alone. I love mysteries being unfolded layer by layer. Looks like we will be getting one suspect every 2 episodes and tnat is fine by me. Now my hubby likes it too and verbally declared he likes it better than 2 of the 3 shows (Mouse and Taxi Driver) we are watching together.

I couldn't put it better! That's exactly why I love that, the layer by layer thing is the part I enjoy the most and I love how each week they present us with new story of a new suspect

The law school is filled with lots of shady characters. The only ones that appear to be innocent and straight forward are Eun-suk and Sol A (For now), but that might change as well.
Eun-suk had grudge against the ex-prosecutor. I think Sol A might be keeping biggest secret regarding her twin. She was just mentioned in passing but family does not tend to talk about her, there is no clue about her existence except Sol A’s comments. Is she missing /dead?
The way show is going it looks like they are going to change suspect every week.

I feel like Eun-sook is too kind and pure, but that may just be LJE fooling us with her amazing acting! She definitely had a reason to hate SBJ.

This Kang Dan, i think i missed it. Which scene it was she mentioned as Kang Sol’s twin sister?

In last week's episodes Kang Sol A mentioned she had a twin sister. This week's episodes show Sol A's much younger sister Byeol saying something about how 'Dan Unnie' would have easily gotten into law school (at the bus stop and again when they drop Sol A at the admission ceremony).

Thank you for the information :)

@stranger It's not just you, I completely missed the twin sister info also.

She aced it. Yay! I was hoping she wasn't cancelled.
This law school is filled with bad vibe characters screaming I'm coming at you at each of our main cast. The school board except Eun Sook clearly has it out for Yangcrates, the student except Sol A and maybe B, and the dropping hair guy has it out for Joon Hwi.

The judgment of Joon Hwi on his uncle for me was rather a fight he should not have involved in. Fine, he tarnished the very memorable memories that might have inspired him to go into law, still him letting Prosecutor Seo know that was quite painful and good punishment to Seo since we know and see he adores his nephew, but telling him to turn himself in was called for,but not in his place to say. He should have let Yangcrates handle that part, besides he had already sent Yang the video.

Who is the killer, I don't know and the show is doing a good job messing with my instincts, so no stakes on who? My stakes is on what killed him? Was it the hemorrhage? If its a person, was it the stalker? That man sure has some legal moves in his head.

So there were some things mentioned in passing this week that should come into play later: In the flashback at the beginning of Episode 4, Joon Hwi's uncle is talking to the guy who gave him the "gift" and it is mentioned that the man's son didn't get into law school but the son's girlfriend did. I'm guessing the girlfriend is Jeon Ye-seul and it seems the relationship is abusive. We find out Sol A's twin's name is Kang Dan. Then we see Professor Yang talking to the "gift" man after the entrance ceremony and Professor Yang asks him if he's seen Kang Dan. So Sol A's sister is wrapped up in this mess somehow.

Every character is shady but I was sure that Jong-hoon and Joon-Hwi were helping each other.

The rapist/driver is still suspicious, we didn't see his face on the different videos, it could be someone else.

I find this drama entertaining. Also the use of the comma was my favorite part. It is very law school.

Is it me or is this drama giving very "murder on the orient express" vibes?

That meet-cute fleecing in the bookstore probably means Sol A and Joon-hwi are endgame.

-Thanks for this. I know this isn't a romance drama but seeing SolHwi makes everything better. Especially since I have to see that creepy pedo every week.

I was just pondering the similarities with How To Get Away With Murder so it was interesting you got the same vibe. I don't think it quite captures the amoral pressure cooker vibe from that show that made it so cracky. It's just a little too earnest and a little too moral.

Also can we get this paedophile out of here, please? His character is ridiculous. Koreans always like to imagine that evil people moustache twirl. This guy has 'rock spider' tattooed on his forehead. And he's everywhere too, even in places where he shouldn't be. Like being the only person in Korea with RH negative blood.