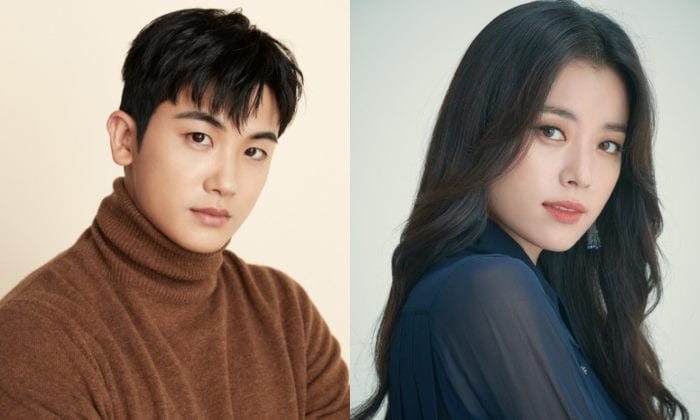 A new tvN thriller called Happiness is being planned and, if the stars align, this will be a big comeback drama for all three actors who are being courted: Park Hyung-shik (Suits), Han Hyo-joo (W-Two Worlds), and Jo Woo-jin (Seobok, Mr. Sunshine). Park recently completed his military service and is reviewing projects for his return to work, while both Han and Jo have been focusing on films for the last few years.

The story imagines a new normal, where infectious diseases have become part of daily life and handling processes have long been institutionalized. The city population is segregated by different floor levels in residential buildings and soon leads to a war of classes sparked by rising tensions and discrimination. Adding to the chaos is the discovery of a new type of infectious disease, igniting the city into a full blown catastrophe.

The part that has been offered to Park Hung-shik is a police detective in the violent crimes unit, Jung Yi-hyun. He was previously a talented starting pitcher with a promising career, but was forced to give up baseball after a bad knee injury. Despite his background, he is more brain than brawn and always thinks first before acting on something. He also has strong principles about upholding public safety and the common good, even if it means making personal sacrifices.

If Han Hyo-joo accepts, she will be taking on the role of police officer Yoon Sae-bom. As a character who grew up in troubled circumstances, she is quick on the uptake when it comes to assessing situations and makes decisions right away. And is also quick to act on something as soon as she thinks about doing it. Although she has a tendency to hold onto grudges, her general life motto is to not make things more difficult for herself in an already complicated world.

The two characters are also described as long-time friends from high school, with Han being a great source of comfort and encouragement for Park after he quits baseball.

The part offered to Jo Woo-jin is Han Tae-seok, a commander of the army’s medical and health unit. In order to better serve both the military as well as the public, he obtained credentials on both sides. When he first served the army, he worked as an intelligence officer. But after his discharge, he went into the field of pharmacy. And his experience makes him a good candidate for managing issues related to infectious diseases.

On the production side, the director and writer of Watcher will be working together again to produce Happiness: PD Ahn Gil-ho and writer Han Sang-woon.

tvN thriller Happiness is currently set to start filming next month in May and is planning to air towards the end of the year. 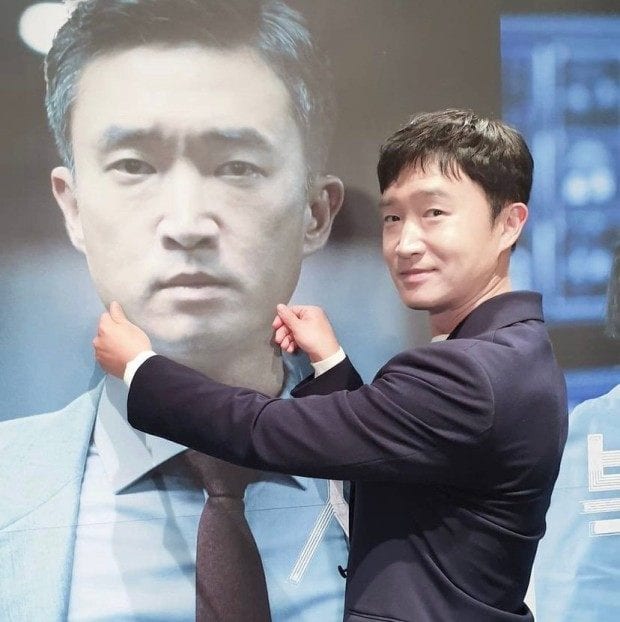 This could be really, really good. I love all three actors. ^^

You had me at Han Hyo Joo but the story line seems genuinely new and intriguing.

Wow, I read too quickly and missed that this is another project with Ahn Gil-ho and Han Sang-woo, making this the upcoming drama I am anticipating most. Definitely cheer-worthy news.

Sounds interesting... although anything PHS, I’m in 😁

Watcher was really good, so I think this has promise. The premise sounds interesting, and I like the potential cast.

*I realize that this isn't confirmed yet, but I am still very excited and wish everyone accepts. This could be really good, Hyung Shik and Hyo Joo are such stellar actors!

This is a great cast so I hope the dystopia setting of the kdrama is on the same level of excellence. But I watch it for the actors if nothing else.

PARK HYUNGSIKKK ahhh i missed him (Han Hyo-joo too!!). This sounds interesting, and as much as I find the plot intriguing I hope this can be a very character driven story.

P.S the photo of Jo Woo-jin is so cute haha

I'm so sad that Park Sung Hoon was going to be the ML in this drama, but had to be dropped b/c of JE issues :( As he and Han Hyo Joo are both in the same agency: BH Entertainment.

Park Hyung-shik is good but I'm sad too, I wanted to see Park Sung-hoon as the ML with Han Hyo-jo... It could have been a big step for him.
I'm still sad about canceling JE...

Right?! So sad, meanwhile Lee Yu-bi got a 2nd FL in Yumi's Cells. Sighs. PSH is so underrated, and I'm saddened that b/c of JE, he was replaced here :(( Plus, him and HHJ would've been pretty hot together, similar ages/vibes. Sighs again, at the loss. Nothing against PHS, but PSH deserved this opportunity. Plus package deal as he's in the same agency as HHJ (BH Entertainment).

As his casting was released the day before JE was canned. Yeah, I think had they fixed the issues beforehand, the show could've been a hit. Also the cast not being paid for shooting 80% of their work is also awful. SBS sucks for that. Ironic that SBS is airing Taxi Driver which is about avenging justice.

I also think he was replaced here so it makes me even sadder.

Oh PSH was 100% replaced here with PHS taking on the role instead. So sad too. He seems like a sweet man in rl. His father suffered or is in a long coma for a while now :(( I just wanted to see him in more stuff, plus this show sounded like it was going to do well for him, and propel his leading man status too :( The other JE actors were able to move on, Lee Yu Bi (Yumi's Cells), and Jang in an upcoming film. Sighs. So unfair. Surprised BH agency didn't push for their client esp. since (rumored to be on JTBC) can take a bit more heat when it comes to signing leads. Dejected :/

Yeah Park Sung-hoon is sooo underrated and nothing against Park Hyung-shik here also but I really wanted Park Sung-hoon to have this chance... It makes me super sad.
Ugh, so unfair!

PSH seems like a sweet guy as I said in rl. Yoon Shi Yoon (his former co-star) said PSH is a pure and kind person. I'm just dejected, like had PSH been the ML here as he was originally suppose to be, I would've been thrilled for him!! Sucks that BH couldn't convince JTBC to take on their client, as HHJ is another client of theirs.

It really is unfair. Since other actors of this show (well 2 of them) have been able to move on. It's been 1 month, this show would've came out in Summer or Fall, so we would've forgotten about JE by then :(( I really hope PSH can get himself in a top notch show soon w/ a viable FL. He's way too talented/cute to not be used, when there are far worse actors w/ worse reputations getting leads.

On brighter news, PSH is in a new drama as the ML. I did like Find me in your Memory for the most part lol.

A romance drama! But ngl, going from HHJ who is a big name, to a new actor feels like a downgrade ngl. PSH would've been elevated/benefitted from that ://

@soulsearch12
Oh, that's great news!
But it sounds like pretty much downgrade...
I liked Find me in your memory... sort of lol. I liked the vibes, not the story/plot.
Hope the script and the drama will be good!
Like you said, HHJ's drama will be in later this year, people will forget about JE by then.
But it seems like BH got rid of any potential problems in advance since HHJ is a bigger star than PSH. Ugh..

Ugh tell me about it?! Sighs, I guess BH still wanted PSH to be in something. So they got this deal instead, the FL and 2nd FL (Joy who I heard was awful in Tempted) aren't helping matters. However, the PD was FMINYM (The romance was quite good), and the writer of Matrimonial Chaos which was a very good drama. So it does bode well for his show esp. if its a romance. I just hope the ratings aren't in the 1-2% mark which I feel might be the case. Sighs :( Hopefully BH can pair PSH in another top quality project in the future. He deserves a big break, he's way too talented/charming for it to not happen.

@soulsearch12
Did you hear PSH stepped down from Ahn Eun Jin’s new JTBC drama?
Whatever the reason is, I'm glad. He deserves a bigger, more buzzworthy drama.
(nothing against Ahn Eun Jin though)
It looks like all the cast of JE was able to move on, so he should too.

Yes :(( I feel he might lose his track to being a ML. Sighs :(( I guess a 2nd ML is where its at. Altho he's part of a big/influential agency (BH), so he could be a part of an ensemble cast there.

Ah, I was looking forward to the JTBC drama. I don't know if they'll give him an opportunity to do a ML in a big budget show anytime soon ://. Hopefully, he can bounce back quickly b/c it looks like he could've done 2-3 dramas (2021), and it looks like this year, he won't have any more shows coming back. Perhaps film, since its less reliant on ratings/eyes like drama land is.

I was pretty interested until the paragraph containing,
"Jo Woo-jin is Han Tae-seok, a commander of the army’s medical and health unit. ...
worked as an intelligence officer ...
went into the field of pharmacy. ...
makes him a good candidate for managing issues related to infectious diseases.".
REALLY ?
That's quite a stretch.

yippee skippee Park Hyung-shik is BACK!
And Han Hyo-joo! its a long time to wait but we've BEEN waiting for PHS to get out of the army anyway so what's a few more months?

The cast is good... I have been loving Jo Woo-Jin since he did Goblin but I think I will give this drama a miss cuz the premise of drama hits me close to home.