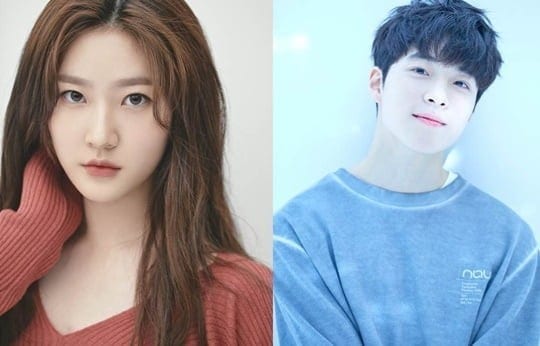 Taking on the central role, Kim Sae-ron plays Ga Doo-shim who wishes she can live an ordinary life just like other high school students in her age group. Alas, she was destined to become a shaman despite only being 18 and she bears the unwanted responsibility of dispelling evil spirits. The story sets off when she transfers to a new school and suddenly gets embroiled in a mysterious serial murder case along with fellow student Nam Da-reum.

Nam plays the part of a well-liked character named Na Woo-soo. Kind, and a model student, he comes from a wealthy family and hasn’t yet experienced much hardship in his life. This all changes of course when he meets Kim Sae-ron and, through her, inherits the ability to see evil spirits. Together they tackle the mystery that is plaguing their school and their relationship develops into something possibly romantic as well.

Directed by PD Park Ho-jin and written by Joo Brothers, KakaoTV’s Shaman Girl Ga Doo-shim will have a total of 12 episodes with each episode being 20 minutes long. Filming is set to officially start around mid-May and the drama is being planned to air towards the end of this year.

Oiii.. I don’t know why I thought of School Nurse File upon reading the description. Anyway, I’m glad to see NDR comes back. I was totally smitten with his characters in both Goblin and Start-Up.

NDR was really good in START UP.

This could work well- or be a total mess. I will definitely give it a try.

Nam Da-reum starring in a main role! Yay! Will definitely watch this, if only for him.

I guess we won’t be getting BEAUTIFUL WORLD 2.

My babies! Yessss. Will this be available on a platform we can have access to? I wanna watch when it comes out.

I'm excited! The newest generation of leading actors! Technically, Kim Sae-ron's had leading roles before, but I feel like she hasn't been an prominent as one would expect. Nam Da-reum is just adorable.

I had to look up how old he was because I am so used to seeing him as a younger version of someone, but he turns 19 this year. I assume he is already 20 in Korean age. He is so cute.

She was the kid who was with Won Bin in The Man from Nowhere!
😳 Where did time go?!

Nam Da-reum finally headlining his own show? And being paired up with someone his own age (and it's with the awesome Kim Sae-ron too)? And with lots of promising shenanigans to boot? Gimme, gimme!!

Now I'm watching the something in the rain series eagerly.
I have watched its 10 episodes so far. The series have 16 episodes apparently.
The something in the rain is a realistic-kind series (perhaps it classify in soap opera genre) on Korean people privacies.
It revolves on a vivacious and frisky and cute and lovely old maid girl that work at a coffee department store as one of its agents.
It revolves on her amorous life. When I watch this series I can discover Korean people real lifestyles and privacies easily and that is why I rejoice from its watching too.
Becuse I can be familiar with Korea inside by this series looking vividly as well. All of this series episodes are on the old maid girl and her love life and her family,…different reactions on this matter!
Especially her mommy has so class viewpoint on love matter. That is why she is upset from her old maid daughter love life with her childhood friend that was alike her sibling too. Her mother considers that boy as her son.
Becuse she grew up him from his childhood. Meantime as she like her daughter a lot she want her daughter marry and date with a rich important guy. That is why she is freaked out from her old maid daughter love life and dating with that boy mainly. Of course I haven’t watched all of its episodes hitherto.
Anyway her old maid attractive daughter had dating with other guy that was lawyer and rich previously. And her mommy desired that her daughter marry him and alike. But her daughter changed her stance gradually and she broke out with him and instead she felt in love with her childhood friend that was alike her step-brother and lived with her family for long years that have returned from us or…to Korea recently.
In any case, if we like Korea and their people real life, I severely recommend you that you look at the something in the rain as a soft amorous series surely!
I personally delight from this attractive and quasi-realistic series.
Becuse my cognition and understanding on Korean families and their privacies and lifestyles increase a lot!
Meanwhile I love romantic and erotic and modern series as well!
I recommend you that if you like Korean people and families real privacies and lifestyles and if you want to allocate your times on an intersting series with soft love genre, watch the something in the rain series by all means soon. I please from watching this entertaining and informative and quasi-realistic series a lot! I can discover Korean families (of course their middle class strata mainly) real privacies and lifestyles through these kinds of attractive and interesting and adorable series watching of course with slow tempo!
I like this series a lot.
Becuse when I watch it as if I lived in Korea country and I pinpointed Korean families real lives and desires and lifestyles and I were alongside them at their houses,…!
Please you watch this interesting and attractive and entertaining and informative series as well.
I love these kinds of series as...

Time sure flies. Nam Da-reum is now a leading man on his own right. Very proud of him and I hope this is a good role. I’m very excited to see Kim Sae-ron back as well. I feel like its been ages since I’ve seen her onscreen.

An appropriate-age-gap pairing? It's a miracle!

Pleased for Nam Da-reum that he has a main lead role.
After a cursory search I can’t find out on anything about PD Park Ho-jin or Writer Joo Brothers.
(O/T I wonder if the Hong Sisters are getting some competition.)

O/T2. NDR returns to familiar casting by playing Ji Chang-wook’s younger self in JTBC’s upcoming THE SOUND OF MAGIC.

This news excites me. I am glad for Nam Da Reum to have another main lead role opportunity and a (probably) romantic one. It is wonderful to see him move beyond playing younger versions of male lead characters. Of course, he absolutely knocks these roles out of the park. In fact, I think he is a significant reason for the success of these dramas because he is able to win our hearts and have us invested in the character before we even meat the main actor. So good for him and hopefully this leads to more opportunities.

Dramaland should do this more often. Pair up age appropriate young talents like these two.
Love them both!