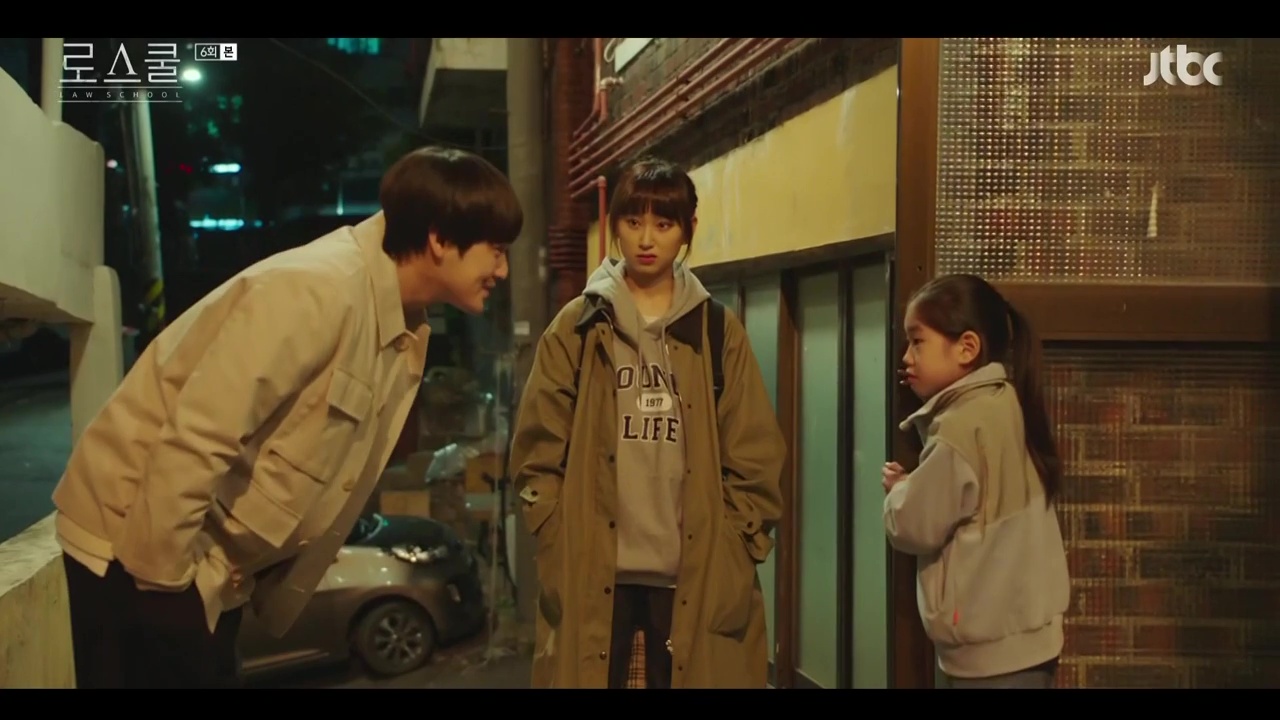 Another week of twists and turns, and it seems like this one murder case is going be dragged out over the entire length of the drama. What keeps me watching, though, are the shifting dynamic between our central ensemble of characters as they learn more about each other—and the implausible ways they’re all tangled together. 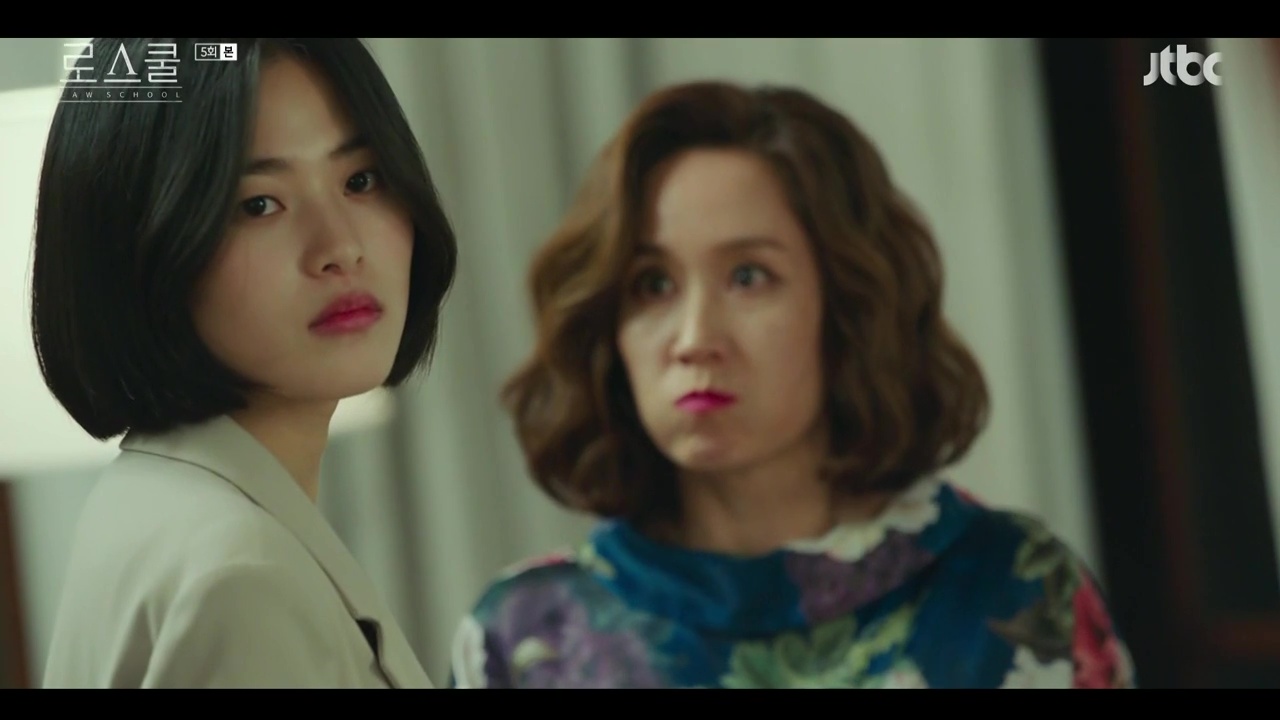 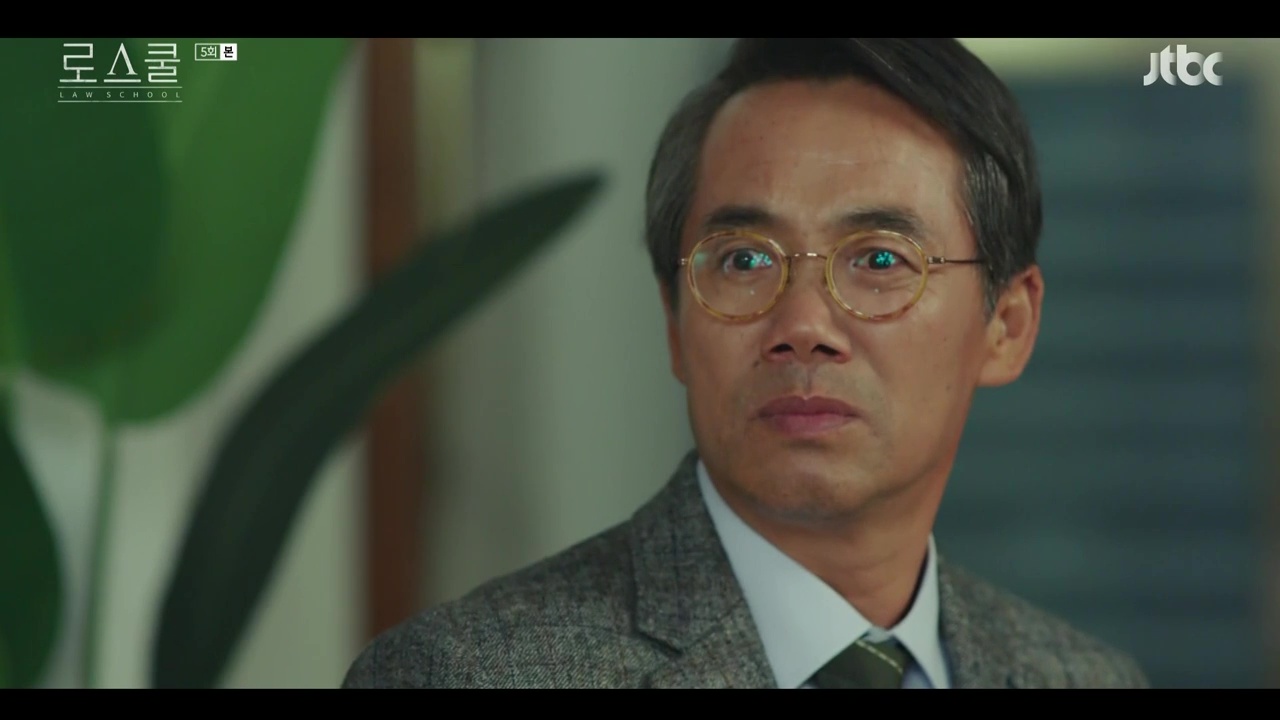 I won’t lie, the drama goes from one unlikely twist to another this week, which is all about Kang Sol B and her incredibly upsetting family unit. Her mom is a literal monster—parental emotional blackmail is a K-drama staple, but carrying pills around in her purse so she can be ready to threaten to kill herself at a moment’s notice? That’s a new low.

The Vice Dean is right about how badly his wife and daughter need therapy, though going to the same appointment is a terrible idea. The plagiarism motive was nicely set up, and I almost wish Sol B had been the killer, because after six episodes spent on one murder case, I’m starting to lose my patience with these endless fake-outs. 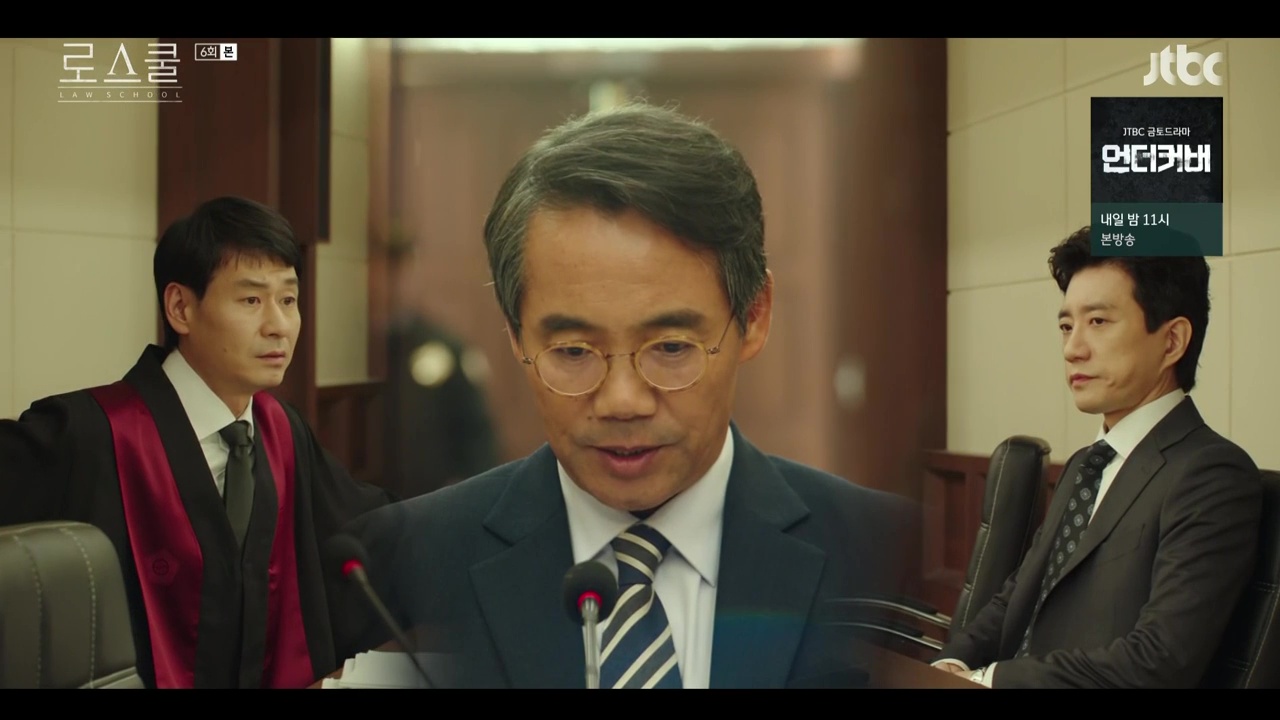 I think part of my issue with this show is its tone. The scenes related to the murder case, and now also The Mystery of Kang Dan, have a soapy, over-the-top feel that could be enjoyable if it didn’t feel so self-serious.

This almost feels unfair given the difference in quality between the shows, but if you compare Law School with the dramatic tone of Vincenzo, or even SKY Castle, those dramas undercut their high-stakes melodrama with a sharp, self-aware humor that just makes it more enjoyable. But here, the intensity is pitched jarringly high, ironically making even legitimately serious moments feel overwrought. 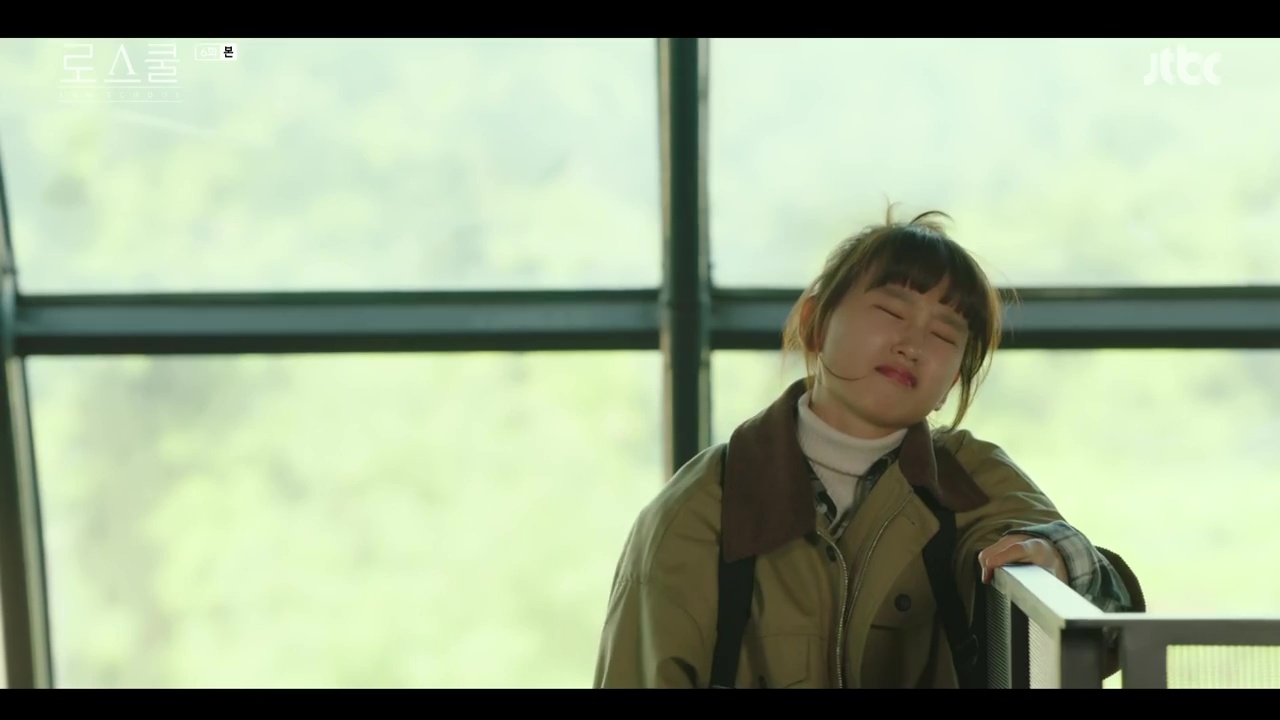 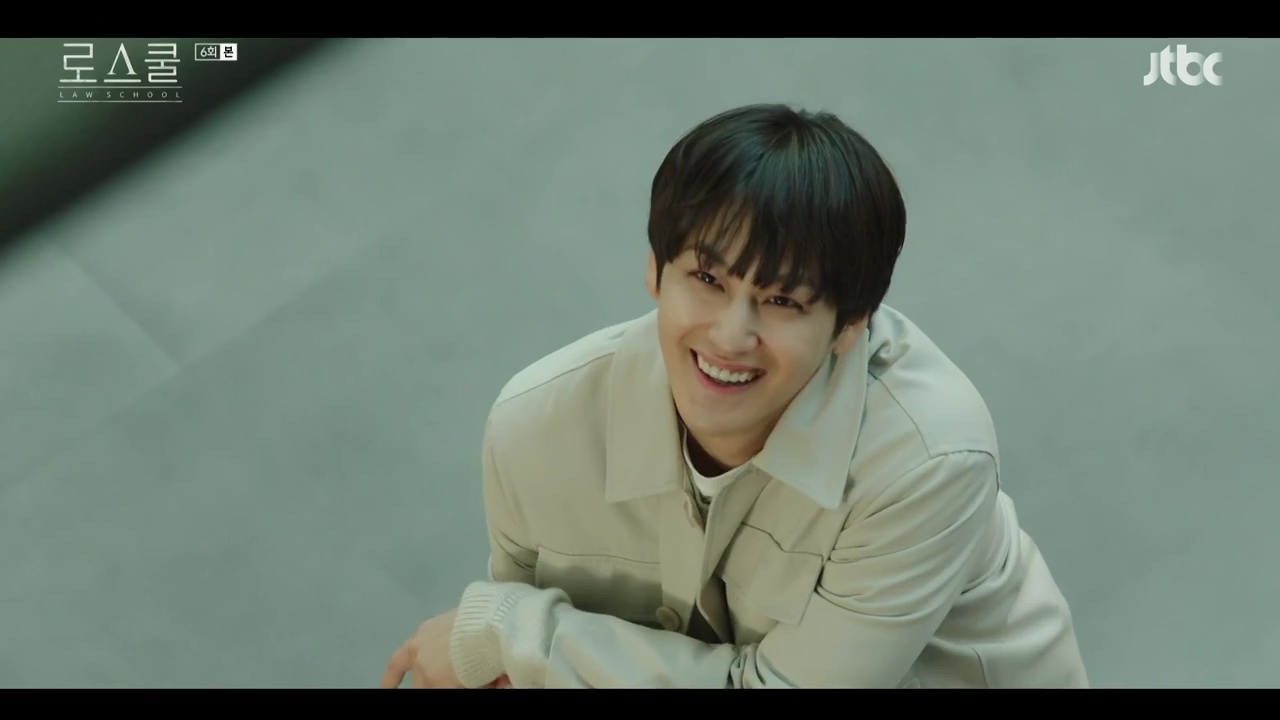 It’s a shame, given how different those scenes are in tone from the slice-of-life campus stuff that I’m really here for. If this show was 80% students moaning about grades and internships, and Joon-hwi and Sol A flirting like dorks over law briefs, I would be so much happier. Give me more of Joon-hwi standing guard outside Sol A’s house and being terrified by the tiniest little fluffy dog ever.

Although the part of that I don’t like is that the pedophile is still hanging around and increasingly insinuating himself in these people’s lives. It seems like they’re milking scenes of him menacing poor little Byul just to add to the creepy atmosphere, and that feels…vile and upsetting. (I did like Joon-hwi silently standing and moving between Sol A and the creep during the trial though. A+ swoony boyfriend material.) 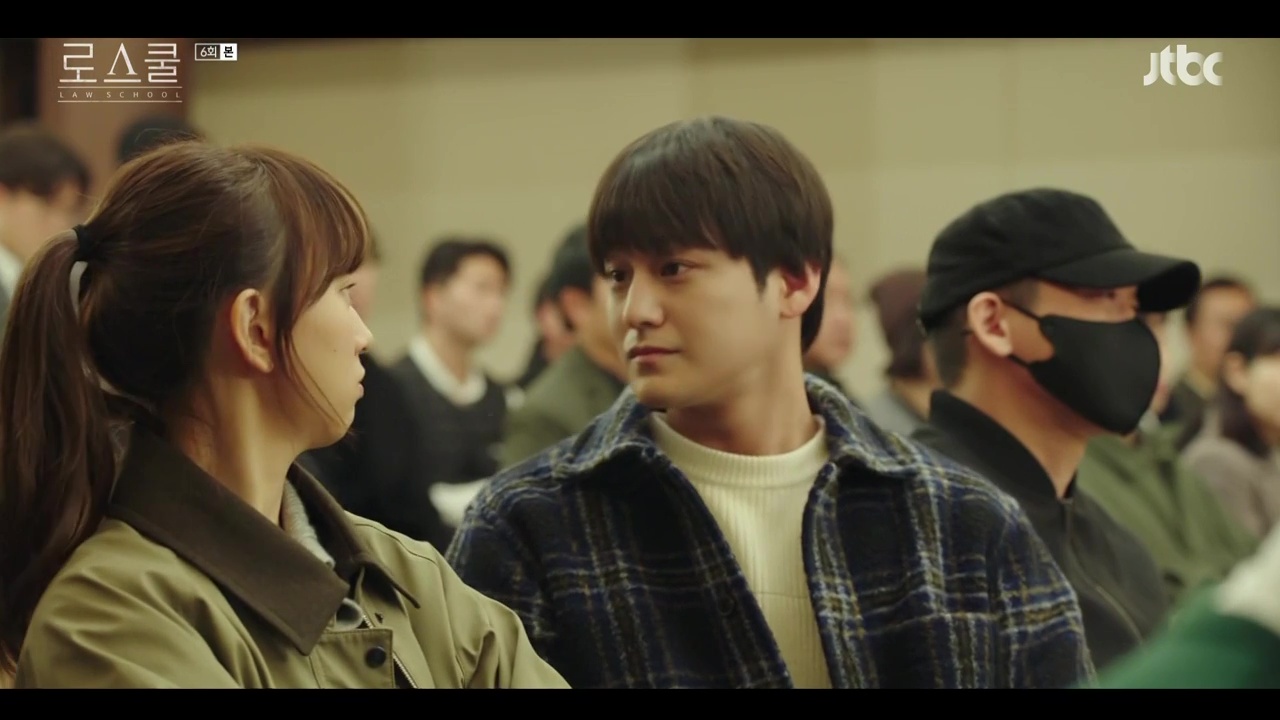 If it weren’t for the sheer pleasure of watching Jong-hoon play everyone around him like fiddles—even if his puzzle-making process is laughably unrealistic—I’d have totally lost interest in the murder case by now. That and how he constantly low-key torments his useless lawyer PARK GEUN-TAE (Lee Chun-hee).

I’m here for the study group drama, Bok-ki noticing how Joon-hwi teases Sol A, and Sol A trying to stage an intervention between Ye-seul and her abusive boyfriend. I’m even enjoying the awkward relationship between the Kang Sols, especially now that Sol A has realized how incredibly toxic Sol B’s home life is, and seems to have to resolved to be her roommate’s protector with her usual reckless altruism. Even if that means being temporarily misconstrued as the Vice Dean’s daughter. 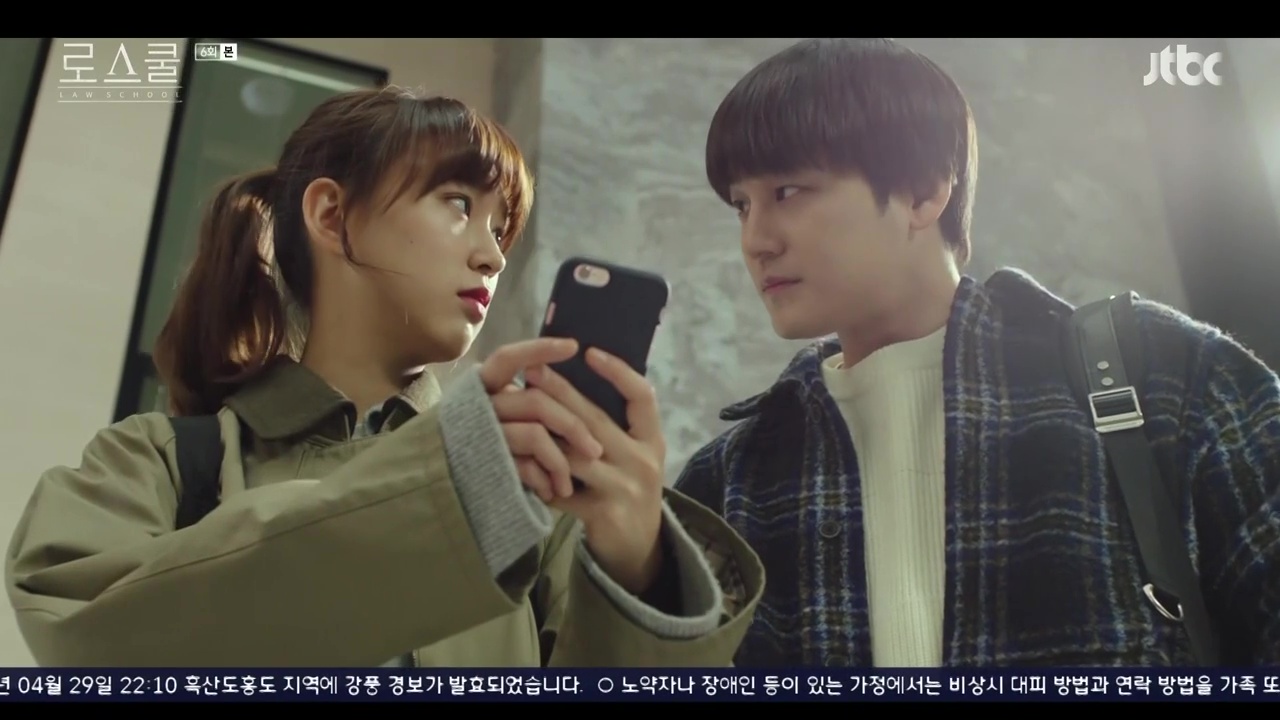 I definitely want more Joon-Hwi (Kim Bum anyone?) and I'll be thankful for more students on the campus playing around, flirting, and moaning but I guess I'm a true fan, cause I kinda am ok with the amount I'm given and can understand the writer in a way. Anyhow, I think although it's important to find the murderer (because it's a murder case), at the same time, all these suspects have a story to unfold, and each time that the show unfolds one for me it's like I have solved part of a big puzzle (I keep using puzzle reference because that's the feeling I get from the show).

This show may be crazy but I managed to sit through several seasons of the unhinged train-wrecked that was HTGAWM, just because of my love for Viola Davis. Law School is tame in comparison (i hope this statement ages well). But like the weecap says, I do wish the show was self-aware of its ridiculousness.

Joon-hwi and Sol A are delightful. Forget about the murders and mysteries, I just need more of their scenes. Kim Bum and Ryu Hye-young have A+ chemistry and the show better not waste it just to focus on that paedophile.

I didn't sit thru HTGAWM, that was too much for me. However, I co-sign your second paragraph 100%.

I'm grateful it's not campus slice of life. The paedophile too is topical in K society at the moment. I'm not that attuned to the melo moments, and I'm totally invested in KMM's Jong-hoon. It's superbly gratifying to see him figuring things out as he goes, a step ahead of most everyone. I'd hate it to be another romp like Vicenzo which is unique. It's also a long way away from SKY Castle even though the current focus is on parental pressure and schooling. I love the legal stuff and all the reasoning around it. It's one of my go to places at the moment, now Navillera and Vincenzo are winding up. N made me cry and V made me laugh. Now give me the sexy mental stuff.

I feel the same way. I dont see this to be another V, nor Skycastle, nor a law school version of hospital playlist. All 4 are different genre from each other and I appreciate this show as it is. I especially like how different perspectives are "debated" here, for example, the defamation case(s), copyright, etc.

Just how it is.

I really don't care about the murderer, I already know that every character will be suspect, we will know about his/her dirty secret, he/she will be cleared...

The new thing is the twin, how she is connected to the rapist's son? To Jong-hoon?

I need more scenes of Joon-hwi flirting with a clueless Sol A too.

Seeing Park So-Yi (Sol A's sister) made me missing her cutest scenes with her uncle in She Would Never Know.

I have managed to enjoy few parts of the show as I have no interest in central mystery. I don’t care who the killer is and I would certainly enjoy the show more if that human trash was off my screen.
Give me more Joo Hwi +Sol A. He is all brain; she is all heart. He is totally goner for her. Who wouldn’t if someone saved you from unfair accusations and cleared your name?
I like how he teases her, constantly amused by her, always goes for her company when they are in same room and protects her despite being deathly afraid of tiny, fluffball of a dog. They are delight together.
I can not say the same for rest of the show. It is filled with incredibly toxic people. If there was a monster mom award, Sol B’s mom will be one of the finalists. Carrying bottle of pill around to threaten her daughter with suicide is new low in manipulative parent behaviour. She is obsessed with having judge in family and for that she has made her husbands and her daughter’s life living hell.

Joon-hwi and Sol A are endlessly cute. But the rest of the show just doesn't measure up. Anyone who's seen any legal drama or any drama at all sees most of the plot points coming - Sol B telling her mom to swallow the pills, father-daughter both not being the murderer, etc.
Unfortunately the only real mystery in the show is the one involving the creepy rapist, his son and Kang Dan. So I guess we're going to have to keep seeing him for a good little while 🤢

The only reason I watch this show is for Sol A and Joon Hwi. they are so ADORABLE together. The rest of the drama can go. The pedophile though, what an incredibly unnecessary character, GO AWAY.

I guess everybody really had their own drama viewing perspective. In my case, I accepted that the murder mystery and the circumstances behind it IS the plot, so naturally it will last through the end, and that the story will be peeled off layer by layer, including that of the pedophile character (yes creepy). Everybody will have their own story to tell and hopefully it will be neatly tied up to the end. The budding romance is a side dish(am enjoying it) and is not meant to be the main theme. I'd be disappointed if it is.

I particularly agree with your last line. Given the nature of the show, it's better that we're given sprinklings of fluffy romance between Sol A and John Hwi, instead of having it feature prominently.

I like the show quite a lot. It wouldn't go on my top ten list, or even my top twenty, but it's available for viewing and I'm interested in the storyline and characters, so I'll likely stick with it to the end.

ooh despite its shortcomings, I actually quite liked this show. I'm unfamiliar with legal cases so watching this feels like brain exercise since english is not my primary language and a lot of technicalities so I need to google things up to understand. That's why I'm quite sad there's no full recap in dramabeans :( I need to see you dissecting this drama please!

The main mystery will be dragged till the end I guess, what with 6 episodes we only cleared so few people. Agree with dramalover4ever on how very satisfying it is to watch Yangcrates! In some instances he feels like sherlock holmes, completely obsessed with solving the puzzle.

Joon Hwi + Sol A moments, feels like an oasis in this otherwise maddening desert.

I couldn't agree more with the cover thread for episodes 5-6. I went into this series thinking it would be about attending law school and the multitude of storylines that could be created using that premise. Instead it's an endless loop of: students being closely entwined in their professor's lives (never happens IRL), yet another manipulative psycho (the mom always threatening suicide rings hollow and ridiculous the way it's presented) and the dragging on of a murder case with the entire cast involved in it.
They took an excellent idea and twisted it into another soap in the vein of Sky Castle and the Penthouse series. Law school in reality is full of tension and stress, but also fun, friendship and fierce competition.
I love Kim Bum and realize law students come from all age groups, but both he and Ryu Hye-Young look much older than most of the other student cast members. Hye-Young appears to be rolling her eyes, constantly grimacing and sneering, exaggeratedly sighing and pouting to compensate the age difference in portraying her character. That behavior doesn't make her seem younger, it makes her acting look juvenile.

I know these are unpopular opinions, but I'm so disappointed by what the series could have been v what they gave us, that I've given up watching.