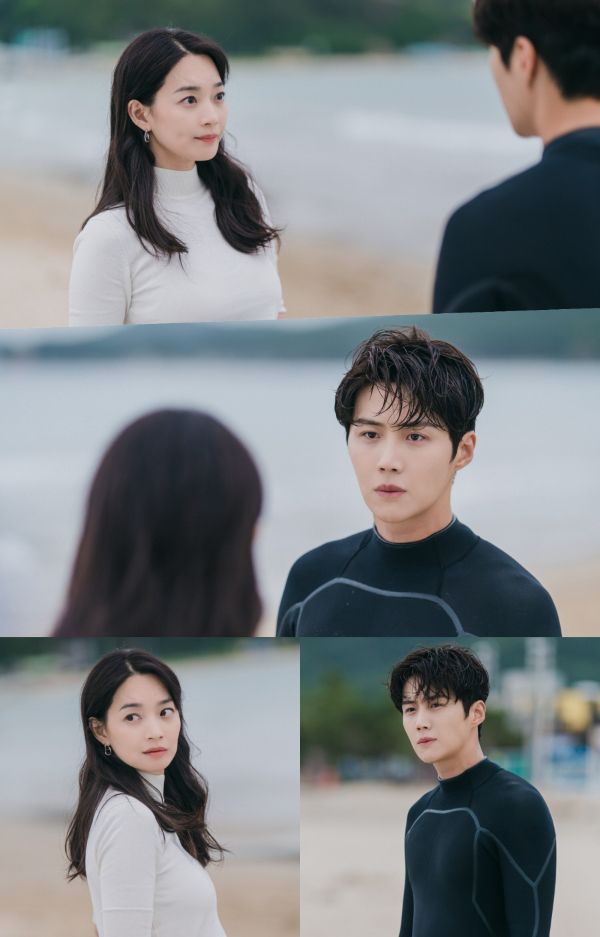 The two meet at a seaside village called Gongjin and start a bickering relationship that leads to an opposites-attract romance. The teaser begins with a lighthouse landscape, with copy reading: “On August 28th, in a sunny, peaceful village…”

A tractor rolls through the mud, and a cute little crab sidewalks by. More scenic shots of country living are shown, and Shin Mina and Kim Sun-ho meet by the beachside. He walks up toward her in full surf mode, and she seems taken aback. Waves crash against the shore, and copy pops up: “… the violent, stormy winds of romance are coming.” They glance at each other, and the teaser ends. 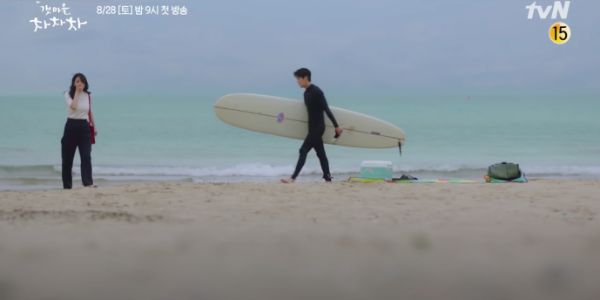 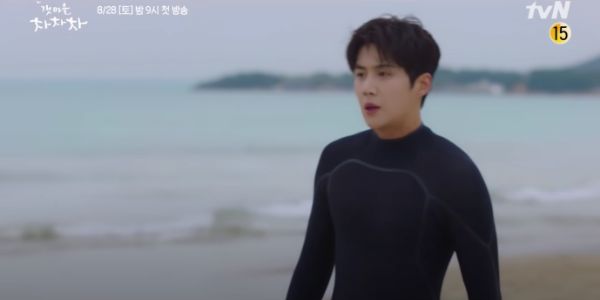 He annoyed me so much in SU so I don't want to watch him in this drama. Imagine if I was serious.

That was terrible!! I had a scowl on my face the moment I read the first few words, which was growing more and more as I read more and then I finished reading 🤣🤣🤣

He never misses, the dramas he is in on the other hand... I hope this one turns out well.

This looks so promising. I want so much to like it. All these two need is a good script and a good director. Fingers crossed.

Yes amen to that!! I shudder to think what happens to great leads when they meet the terrible trio (writer, director, editor) - I am thinking “oh master”

Oh what pretty scenery...that is KSH of course. I'm really liking his styling so far. I feel like they're really going to milk the teasers because of the KSH hype lol. I'm pleased so far though and excited to see a teaser with the actors really in their characters.

That KSH in the last picture sure can be an alternative wallpaper on my phone.

Yes to no noble idiocy!

Litc is a Web drama so it didn't technically bomb, it was actually a success. It hardly had any promotion yet it was number in Korea for a bit, top 11 worldwide and instantly had 2 million views on kakoa. The narrative that it's a flop comes from the fact that there was hardly any hype on social media. Plus Kim ji won and ji chang wook were praised for their acting in episode 8(bar scene). Its a hit and a miss type of show with the mokumentary style and the FL's behavior.

O/T1.I have not watched HEIRS (2013) (Viki US) but I have seen a few pics showing LMH wearing a mean wetsuit from that drama.

O/T2. A couple of days ago I noticed that JCW’s BACKSTREET ROOKIE from SBS (2020) appeared on Viki’s “Coming Soon” list. ROOKIE originally streamed on iQiyi. To me this is all part of the mystery of where dramas stream.
I passed on JCW’s MELTY, ROOKIE and LOVESTRUCK. I will be watching his THE SOUND OF MAGIC from JTBC on Netflix when it airs.

BACKSTREET ROOKIE was actually quite good. And a lot of people liked it- it is still popular on iQIYI even though it has been well over a year since it was first broadcast. I thought that JCW gave an excellent performance- he was not just riding on Kim Yoo-jung's coattails. Based upon that performance I expect good things in this show.

Why do I feel like he did not fix her leaky roof or something and somehow went out to surf and she annoyed about it!!!

Sorry my imagination went a bit over board! Hope the waves don't sink this drama!

i would fall in love with him! wait i already have

This is looking to be something nice to watch this summer. Oh how I've missed Shin mina, man it's been a while! I like Kim seon ho I've only seen him in start up but he oozed so much charisma and swag.

surfing doesn´t quite read as country bumpkin to me but then, in our movie "Kratt" the cillage kids rode segways and made bicycle stunts. Maybe country life means something different nowadays.

I don´t know what to expect but I want that jack-of-all-trades delivered and not only promised. Like, what does he do, is that just a subline or do we get something meaty

or, maybe I have stereotypes... like, I am not saying that country folks can´t do things city folks do. Or that they are more hard working maybe there are no jobs at all and then all they do is surf & sit around by the roadside. what is a realistic picture of the countryside today? probably not just growing cabbage and keeping goats any more, right? Mobile world, everything looks different. Do true country folks as we imagine even exist, or, to say, are they smashing our stereotypes?

The whole 'stupid country bumpkin' idea is simply a ignorant urban stereotype. In reality country folk have to be good at doing many things precisely because there is often no skilled specialist easily at hand to do those things for them. It actually takes a fair amount of brainpower to survive in the country.

I am really looking forward to this one.

I really like both the leads in his drama, I feel so safe with both actors that they will just get it right.

I am not a veteran of k-dramas, but I have started to wonder whether there is a now trend of showing dramas that are set in the more traditional countryside and that the traditional culture and values there have a lot of healing powers. A number of recent dramas fall in this category such as RACKET BOYS, WHEN THE WEATHER IS FINE, even BEYOND EVIL and DO DO SOL SOL LA LA LA SO and the wonderful MY CONTRACTED HUSBAND MR OH. To a degree Doldam Hospital as well is a countryside haven for people not ruled by money, but conscience.

Maybe it was always a drama theme. What do you think?