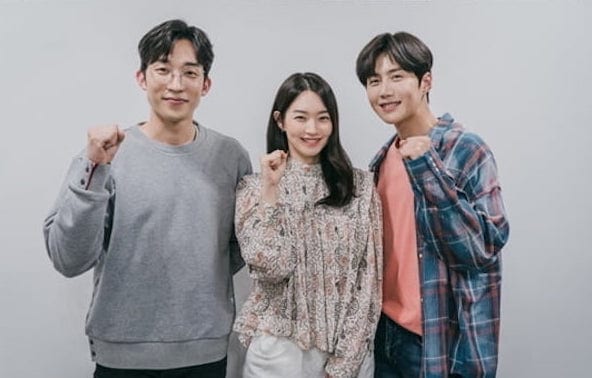 Shin Mina (Chief of Staff 2) plays the beautiful, intelligent, and successful dentist, Yoon Hye-jin. Although on paper, she has the perfect resume, she can be a bit sloppy and clumsy in real life, which makes her all the more lovable.

Kim Sun-ho (Start-up) plays the gruff and warm-hearted Hong Doo-shik, who is often referred to by the village folks as “Chief Hong.” However, he’s not really the chief of anything, since he doesn’t have a job and as such, his daily “uniform” is a tracksuit. But if anyone is in trouble, he always appears to help. Finally, Lee Sang-yi (Youth of May) plays Ji Sung-hyun, a famous variety PD who is known to have the Midas touch in his industry.

The Crowned Clown’s Shin Ha-eun will be penning the script, with Yoo Jae-won (Oh My Ghostess, Tomorrow With You) at the helm. Director Yoo said at the beginning of the script read: “I’m honored to work with and feel supported by all the actors and staff members who are here.” He added, “I hope the filming set will be a fun and healing environment. We will be following COVID-19 guidelines, and I will try my best to ensure that we finish filming in a healthful way.”

Hometown Cha-Cha-Cha is scheduled to air in the later half of this year. 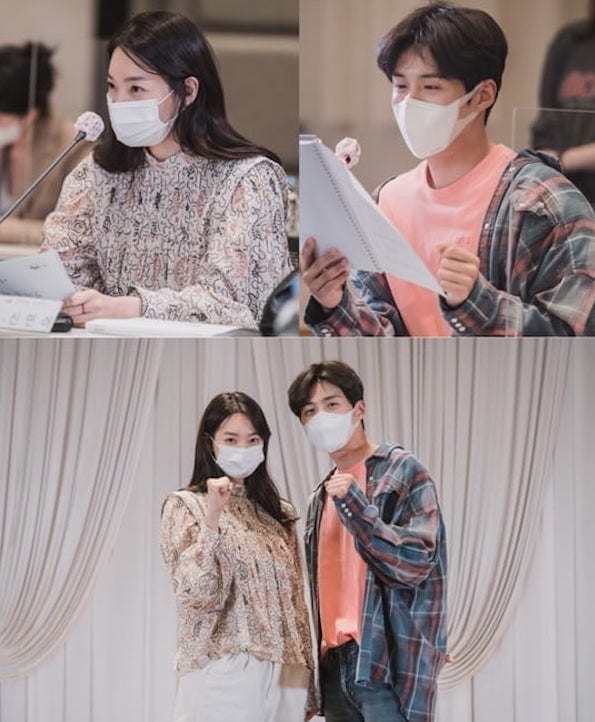 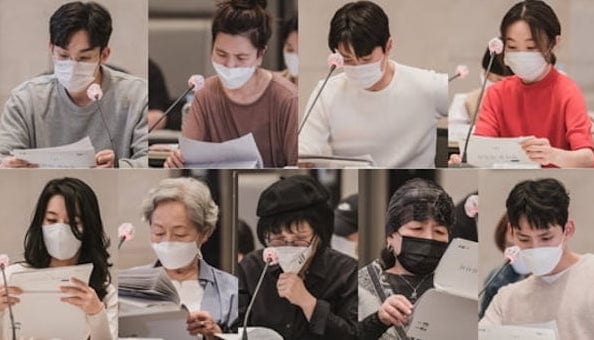 I adore Shin Min Na, will watch or at least try.

I like all three. A seaside village romance sounds nice, hopefully there is enough story.

My first thought was, yay the cast!!

My second thought was, uh-oh why does this sound like Warm and Cozyy- romance in a small village beside the sea......

I'm gonna go ahead and pretend that never existed and hope this drama can do a better job at selling the seaside romance. *fingers AND toes crossed*.

I enjoyed WARM AND COZY.

It is possible that what put you off was the attempt to weave in elements of a famous novel- remember that the alternate title for that show as JEJU ISLAND GATSBY. The result was a somewhat confused story. So your reaction as understandable.

This show in contrast is based upon a good movie that does not have such confusing elements. I have high hopes for this one.

As a kid, going to the coast was a highly-anticipated day of fun. Just standing where the water meets the land and looking at that endless expanse of ocean was healing, even for a child. Frankly, after Covid, I am totally up for some happy days with sand and waves. Two main actors are favorites, so I'm wishing everyone on the cast and crew a wonderful shoot.

Kim Seon-Ho and Lee Sang-Yi in one drama! I'm going to check this out. Why does a dentist end up in a small fishing village though? Is it her home town?

That's the real head scratcher. It sounds bizarre and is subsequently concerning lol

Yeah, maybe it's like "When The Weather Is Fine" or "Top Star U Baek" where the Seoul professional has some kind of scandal at work and has to go to the countryside to let the scandal die down. But why is Lee Sang-Yi playing a variety show PD? Is his character there to film a show like "Law of the Jungle" or "2 Days 1 Night"? It would be funny if they made references to Kim Seon Ho's role on "2D1N".

Yeah see I'm thinking Forest type of professional that goes rural kind of drama. Haha but I really do hope it's good for KSH's sake (and mine, I need good content from him) and some 2D1N meta would be fun.

@fogcity What? Do people who live in small fishing villages not need dentists? I live in a small coastal town and we have dentists.

You are right. And this dentist does not just serve the needs of one village but draws patients from neighboring ones as well. While there would not be many these communities do have doctors, lawyers and dentists- but they are spread out, just as the patients and clients are.

The part that bothered me was the “ a bit sloppy and clumsy in real life” part - in a dentist!

6 parkchuna is still an Errant 🫘

Oh my, it will be a full on Dimples Attack by Mina n Seon Ho! I hope they spend lots of time by the beach, since I will be stuck at home for a while longer and need to travel through my dramas.

@parkchuna We'll be hit by the force of one resplendent dimple, but hardly recover before the next magnificent onslaught of dimple radiance LEVELS. US. ALL.

We do not stand a chance, and I am ready.

I don’t even have to read the synopsis to know that this is gonna be a GOOD drama. The fact that the story will happen around the sea area makes it even more attractive as I LOVE the sea 🌊.

If it turns out to be bad, I might drop BB; please don’t be bad because I’d hate to do that. 🥺

Yes, how worried should BB be?

Should be. Mommy loves him the most... now.

Wondering who will replace him...

He won’t be replaced soon as I just watched him in 2D1N and he wore a white t-shirt and stole my heart (again.) He is quite lucky.

I hate things and people who are stagnant. BB has been away from dramas (my screen) for HALF a year, and my attention wanes.

😆 He's on tv constantly, just not in a drama.

Oh well that’s totally normal! That’s why we have a cycle of oppas to go through right? 😬😄

I don’t have a list of oppas parkchuna, I have only BB in my heart.

*holds BB tightly in case parkchuna tries to steal him*

😂😂 i promise to borrow him only, not steal.

Something else we have in common, loving the sea. I'm looking forward to this one.

I love the sea. I’m going to the seaside soon.

Have a wonderful time. I love ocean vacations the most.

As long as the Cha Cha Cha in the title doesn't indicate a lot dancing required, your BB should be safe. He earned the nickname "Paper Doll" on 2D1N for his somewhat stiff dance moves, but he worked hard and improved. No worries.

Thank you Alluvial_Fan; if you have seen him in 2D1N the ep before the last available ep, you would have seen that he is quite strong and good-humored and can dance well (at least on a rope.) 😂

Compared to the beginning of 2D1N he has definitely become better coordinated and more at ease with the cast. That rope game was amazing but getting out of the stretchy band was even better!

lol.. he can't dance.. did you see him in the episode where that shiney guy cameoed..

Otherwise, i think seon ho is quite talented and was playing dumb in the early episodes...i find him quite intelligent and shrewd (in a good way) in his decision making.. he is very perceptive and picks on things quickly and adapts quickly

Super excited for the Dimple Couple, but I'm actually just as pumped for Lee Sang-yi! I was very impressed with his performance in Youth of May (especially in last stretch of the drama), so I'm super happy to see him again so soon.

The writer of the THE CROWNED CLOWN pens a drama set by the sea... I'm not sure about this. I love the sea, but I'm still traumatised about a certain writing decision in TCC. What about you, @sicarius? Have you recovered from TCC?

You're such a troll

Oh boy. Guess I won’t be watching this then….

But except the end, it was pretty good. And the scene at the sea was beautiful and sad. So I hope for a better ending!

... This sounds like my worst nightmare crew wise, IF, IF I wasn't already aware of the Hong's planning an Ancient Korean Fantasy show.

That combined with the inevitable appearance of Kim Seon Ho's crazy fans (no, not you, the other ones) means y'all are free to watch this on your own and I will be somewhere, far, far away, on a completely different beach, with a cocktail.

Aside from everything else, I foresee 16 episodes of comments with the 'd' word and I still have that twitch.
Shin Mina makes me homicidal and I managed to avoid the whole Start Up fiasco. Also I love cocktails on beaches.
I vote we run off together and drink Mojitos somewhere warm and write our own drama.

Sold, sealed, signed and delivered. When do we leave.

So glad I am not the only one who was traumatized by some of Seonho's fans during Start-Up, hence my comment above.

1. Finally Kim Seon-Ho is the main lead!!!!
2. A male lead that is not a young and rich successful and arrogant CEO, or a prosecutor or a lawyer or a police officer or an important artist or a chef, or whatever rich super hot shot, but a kind of a normal guy and even unemployed??? Welcome! 🎊🎉🎇🎆🎈 I am surprised, but happy.
3. The setting is not in Seoul but in a village? Another great point.

Very happy, I am very happy with this drama...