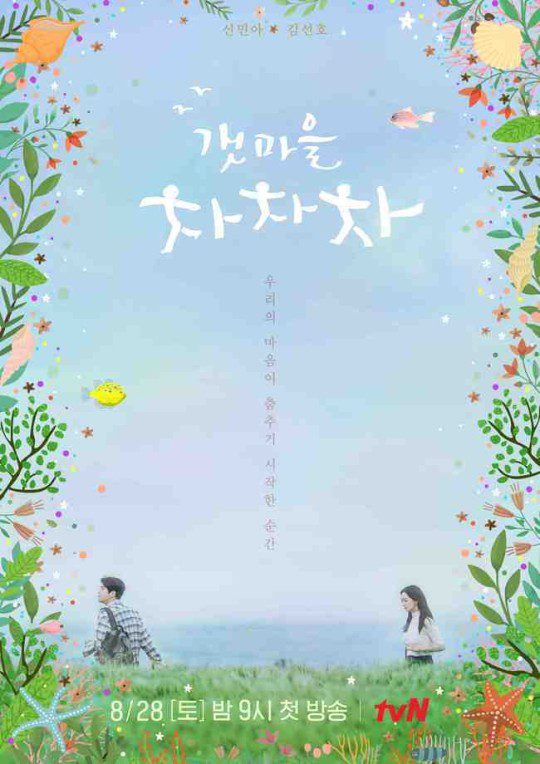 Set in a quiet village along the coastline, romance blossoms when newcomer city girl Shin Mina (Chief of Staff 2) arrives and meets our resident country boy Kim Sun-ho (Start-Up). Although Shin is a fish out of water as she adjusts to life in the village, the story follows her growth as she connects with her new neighbors and finds self-healing through the beautiful seaside landscape around her.

In the newly released poster, we see the tagline: “The moment when our hearts begin to dance,” which is also echoed in the teaser.

As upbeat music plays in the background, the teaser follows Shin Mina and Kim Sun-ho as they encounter each other on the street. She follows Kim through a field and the scene cuts to Kim Sun-ho surfing in the ocean. The intercutting text screens announce: “2021,” “August,” “Late summer when the tides sparkle,” and “Our hearts begin to dance.” In a sequence of shots we see Shin Mina and Kim Sun-ho going about their day-to-day routines, and the teaser closes with the two walking together down the road. 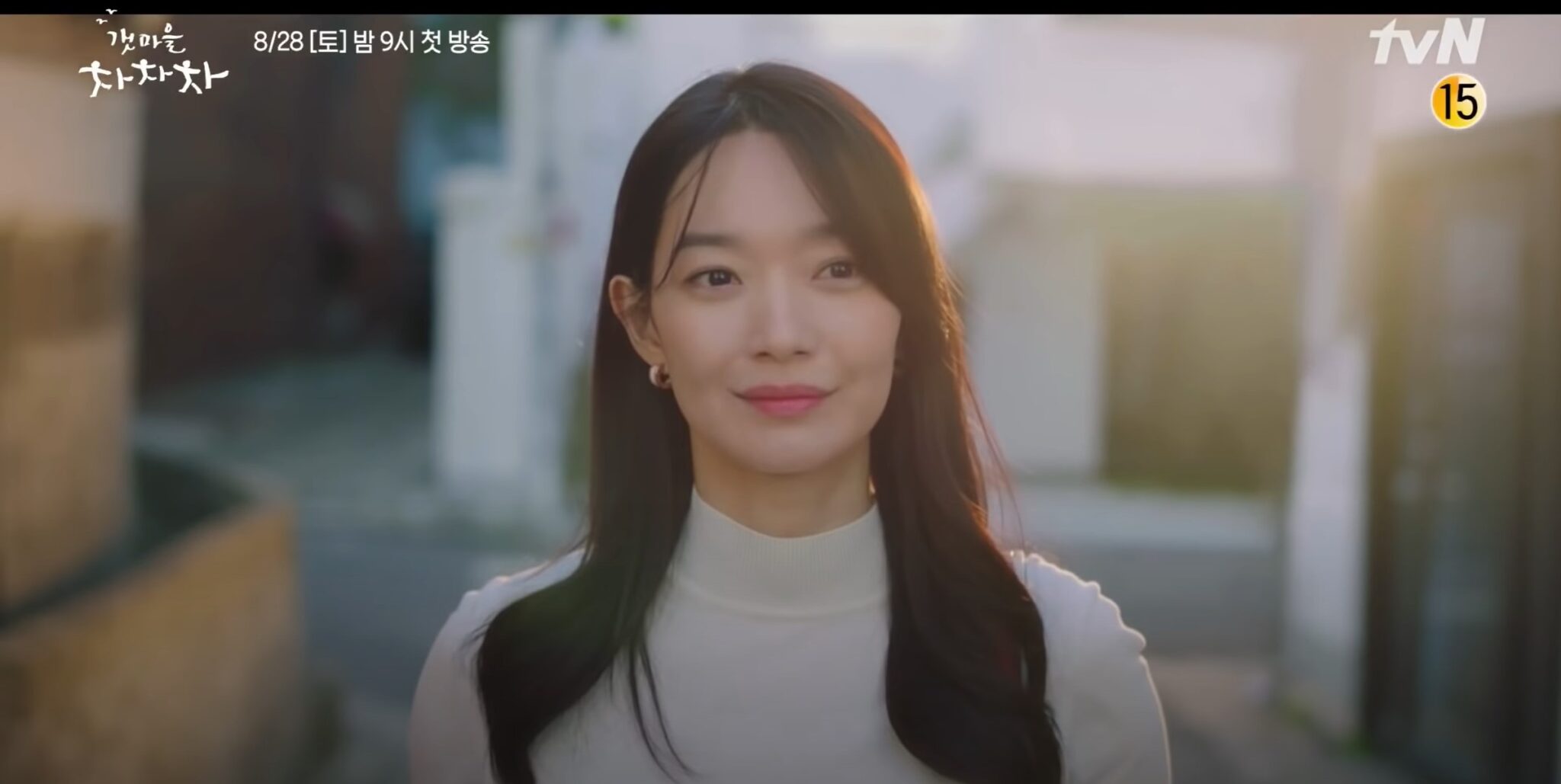 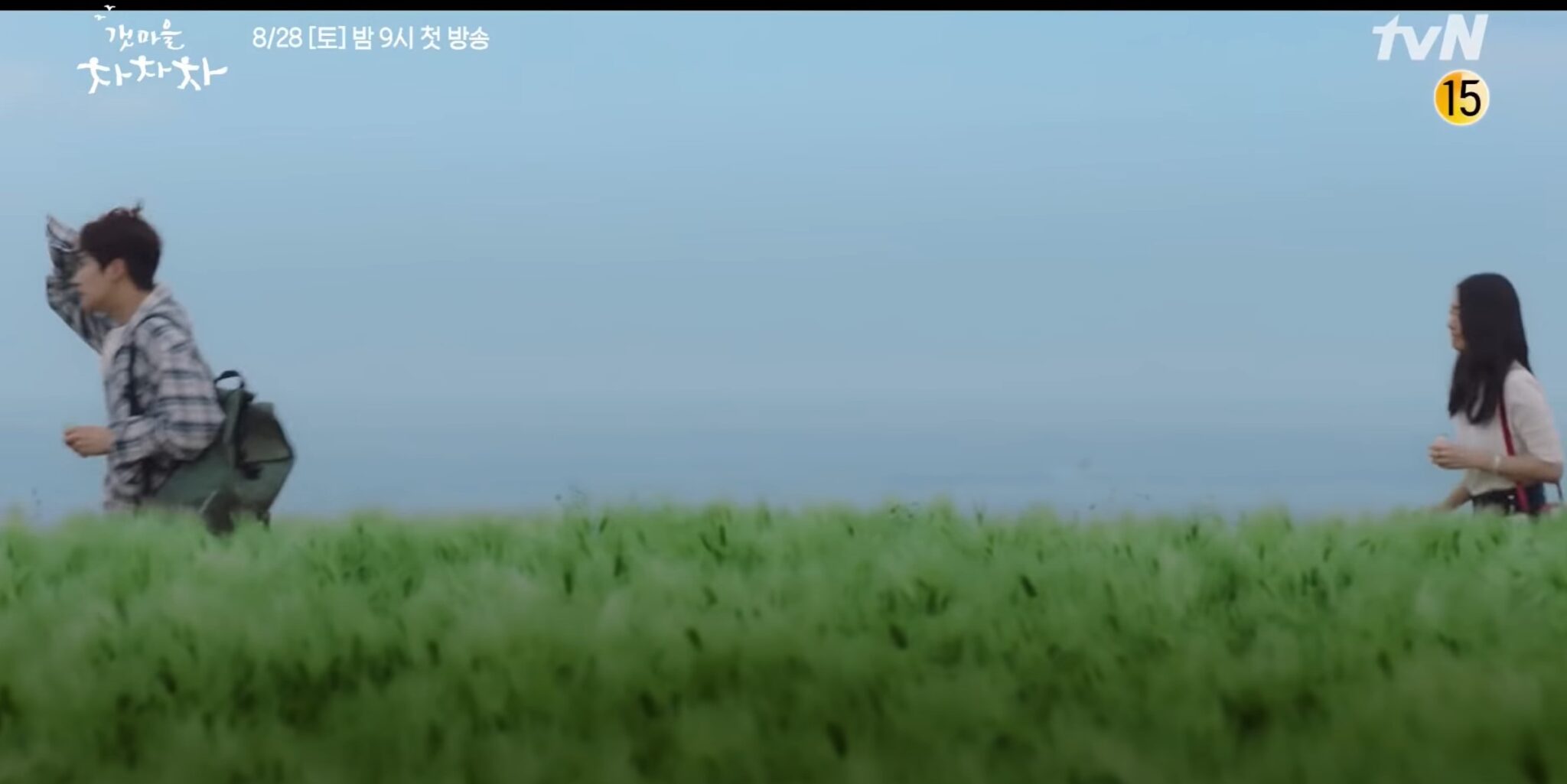 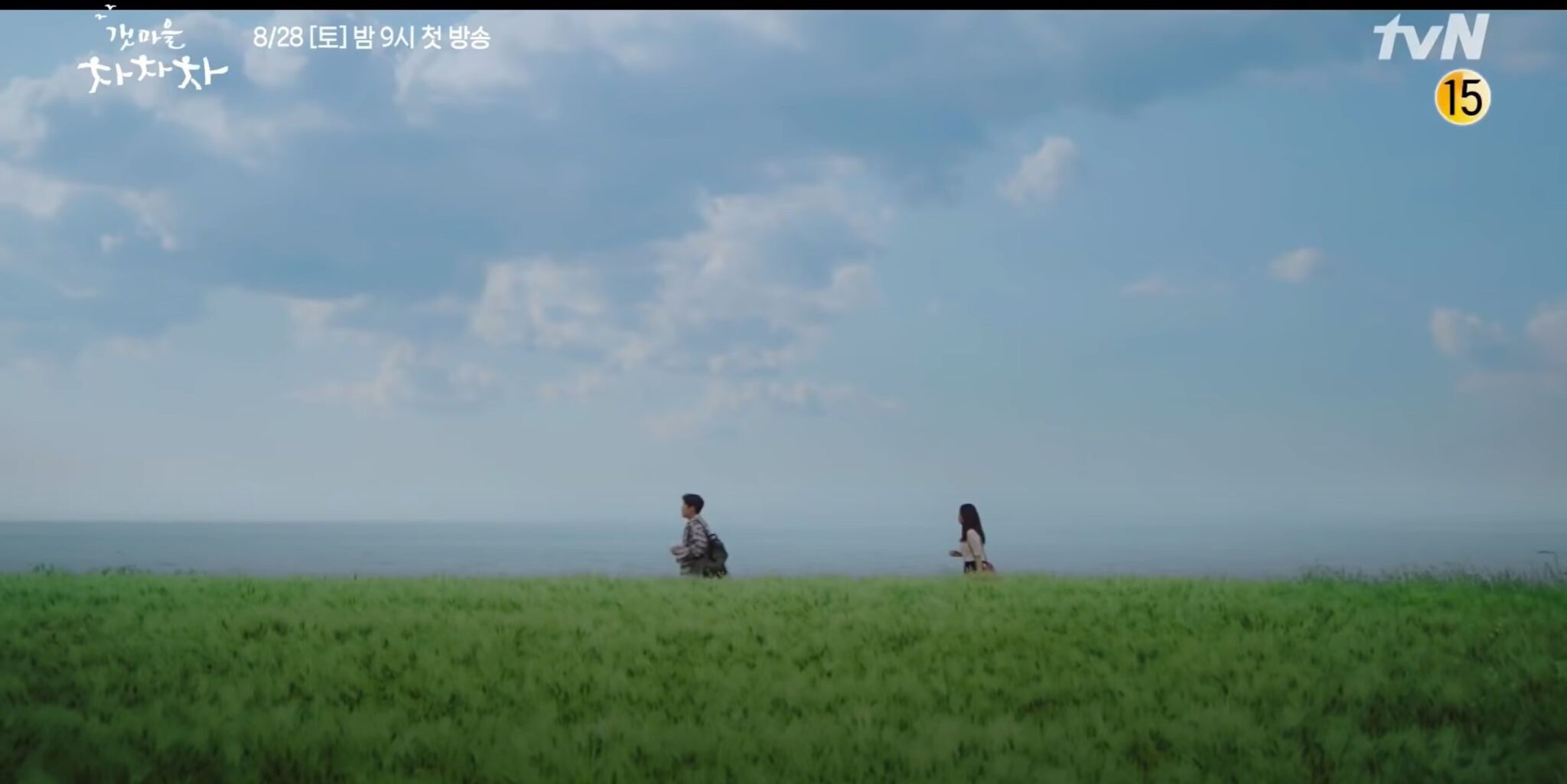 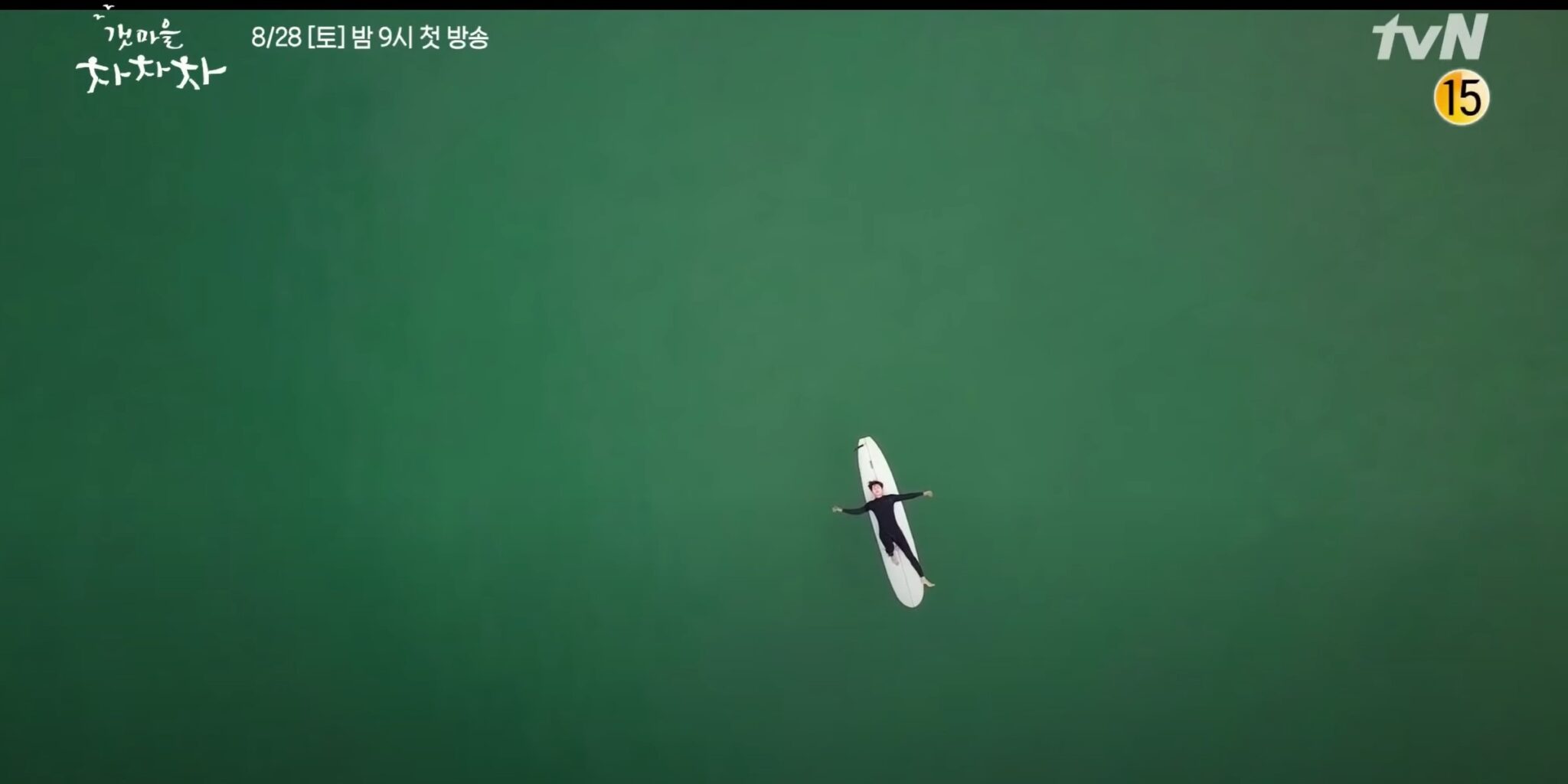 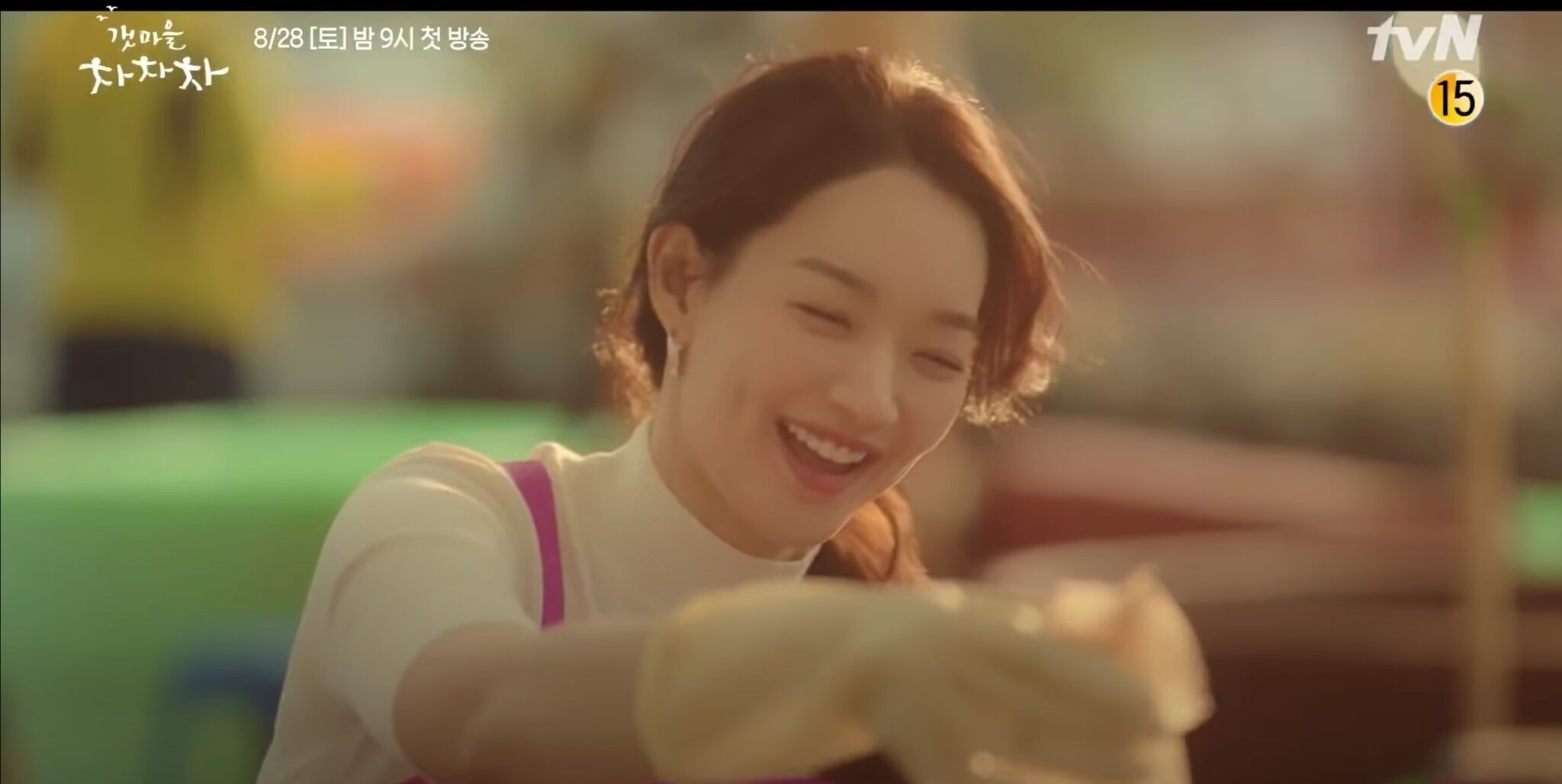 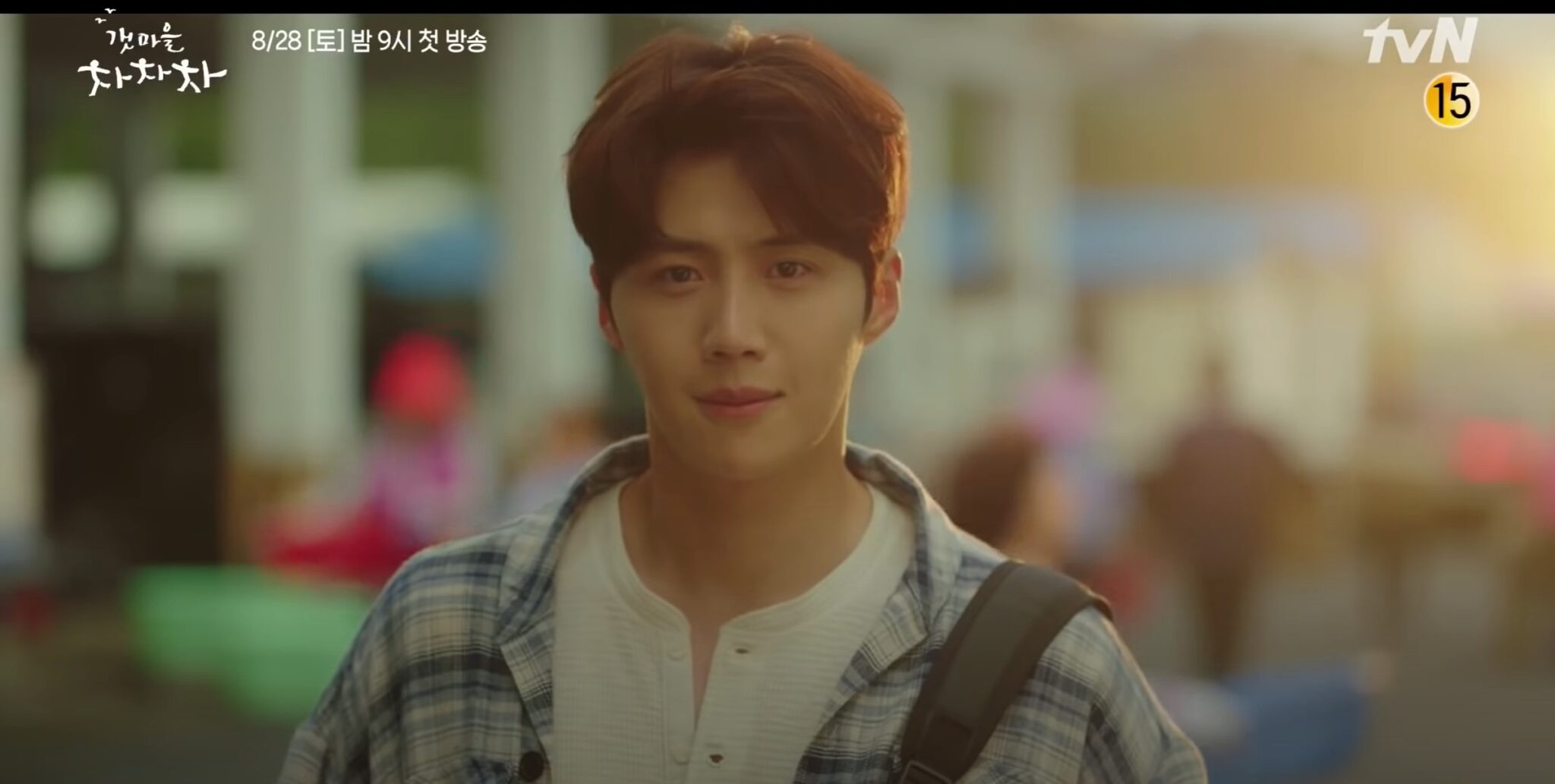 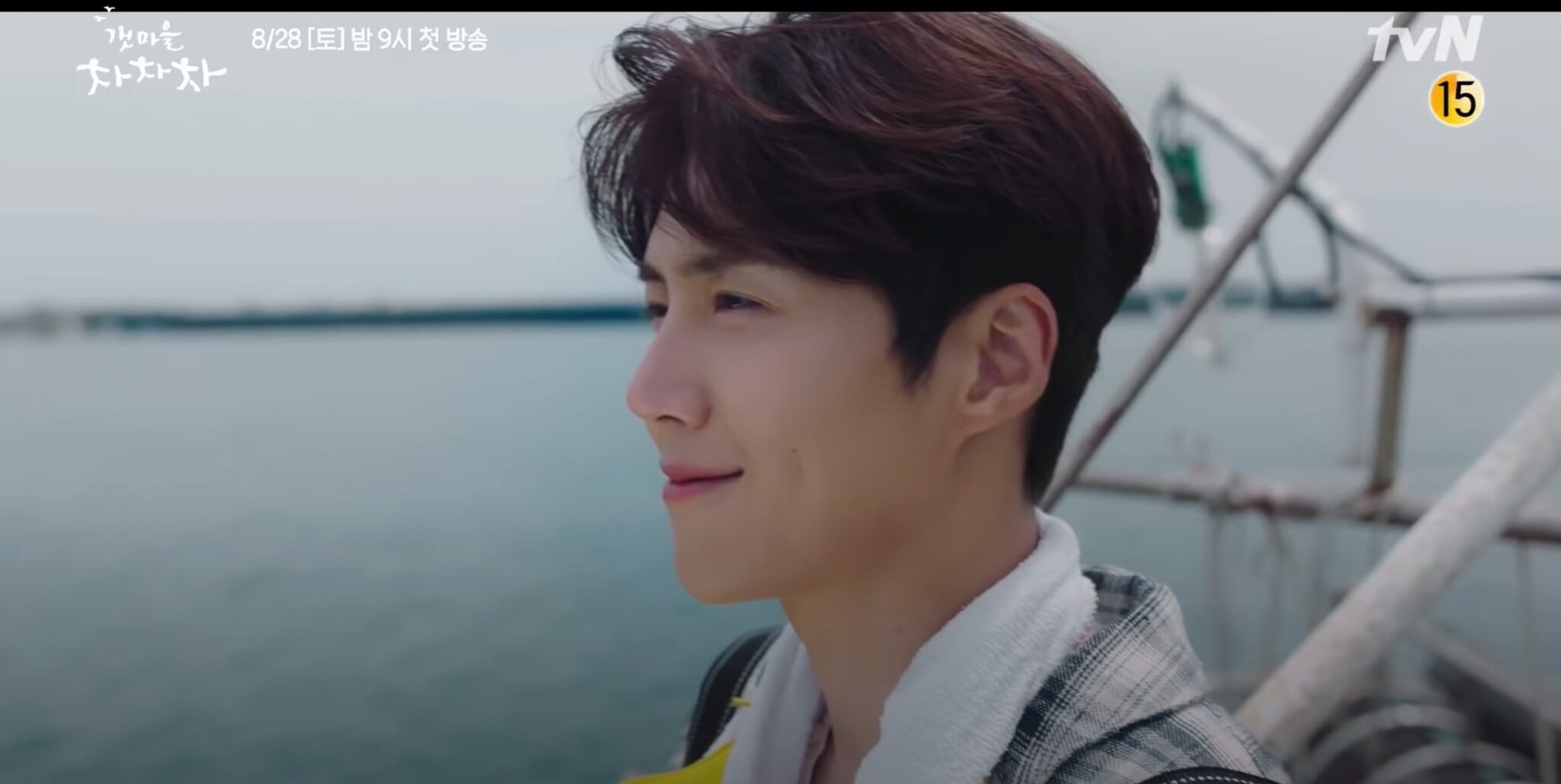 It looks refreshing! I'm super excited for it!

I'm not going to lie, the teaser felt like a commercial lol. I admit it looks like it'll be a very pretty show, with the seaside setting. I really hope this is cute fluff and we get dimple galore! Kim Seon Ho, you're backkkk!

It does! I first saw it on Instagram without any caption and I had to google to double-check that it was a drama.

Available on Neflix US. I have seen only two of KSH’s dramas (STRONGEST DELIVERYMAN and 100 DAYS MY PRINCE) and his cameo in RUN ON. There could be an argument that in STRONGEST DELIVERYMAN KSH together with Go Won-hee stole the show they were so good and funny together.
I am looking forward to this drama. It appears to be an in-house tvN production with the writing and directing.

YES he and Go Won-hee totally stole the show in Strongest Deliveryman! it's where I discovered and fell in love with KSH. so happy he's getting the recognition he deserves now!

OK, just watching them smile makes me happy. Good writing would be a bonus.

ok but the cast? the writer? the director?
having seen their previous works, i can't help but to have high expectations. lol

omg please be good! i know for sure that the acting is gonna be good. such solid cast members we have here.

OMG! It's dimples and smiles! Looks like a lot of sunshine too!
Where is my spectacles! I need to watch this!

BABY IS BACK and mommy is happy to the moon and back!

*places three watermelons on the altar to please dramagods*

I’m so happy Baby is back. ☺️
If I make some more cakes, I’ll place some of them on the altar, too.

With the lighters, dramagods can have some grilled watermelons...

Just looked at the writer and now I'm hoping for well written with a decent final episode that I don't have to wipe from my memory.

Does the writer have the record of writing bad dramas that had bad endings?

The Crowned Clown was great until the last episode, then the end didn't really make sense...

It seemed like a lame attempt so they could have a "happy" ending.

O/T I concur with your diagnosis of the ending of THE CROWNED CLOWN. Very disappointing.
However TCC’s writers and director were quite gutsy and Yeo Jin-goo’s performance was wonderful especially his work in episodes 7 and 8!
If you want a YJG fix TCC is on Viki US and you don’t have to watch the entire drama but check out episodes 7 and 8 if you want to see some great YJG acting.

Now I am not expecting that kind of stuff in CHA CHA CHA but CAMELLIA was set in a lovely coastal town (remember the marinated crabs)? And that place had a serial killer.

Hi haraboji Bong-soo and Mugy. Queenie Sicarius already showed me a short clip compiling all wonderful moments of dark under-eye YJG acting as the king and the clown in TCC and I agree that he was very good in it.

Mugy, I’ll show you what I made to appease the dramagods tomorrow. Will post it on my FW.

I saw it and think they will be pleased.

I really like this actress and the concept of this show simply seems to be charming. I have very high expectations for this show.

The sea-blue color grading feels so summery... yay! And istg, KSH and Mina's dimpled smiles have superpowers, i have been smiling for a minute straight now!... also, they have beautiful teeth <3
Can't wait for cha cha cha~

Could they BE any cuter? I picture the force of both of these gorgeous people walking towards me and I'm shook. 🤩🥰

This looks delightful and I love these two. They always make me laugh. All the signs are warm and pretty. The wary sceptic that I am is wondering what lies beneath the surface? I looking forward to being lulled and maybe even caught off guard.

This drama could not come soon enough! Hope it just requires them to smile, naturally, a lot...

Is this like a gender-reversed "Top Star U Baek" where a Seoul resident moves to a small seaside town and falls in love with a charming local?

It's the remake of the movie Mr. Hong.

So, how good was Mr. Hong? And doesn't this mean we are guaranteed to be spared a serial killer?

20 parkchuna is still an Errant 🫘

So pretty my pretties.

What a lovely poster — did you notice a little fish in the upper right hand corner? It probably alludes to “fish out of water” description of Shin Mina.

Great cast, great director, but I’m worried about the writer. I couldn’t finish any of their previous works. Some of the writing choices were head-scratching and some of the parts of dramas downright boring. Hopefully, they prove me wrong.

The D word! Not the D word! It's already starting...
Arrgghhhh...
Tag me when it's over.

I was going to tag you and @yyishere to make sure you knew it started. So happy you found your way to our dimplecentric land.

Not the D word *shudders*

Theses dimples are too much for me!! 💜💜