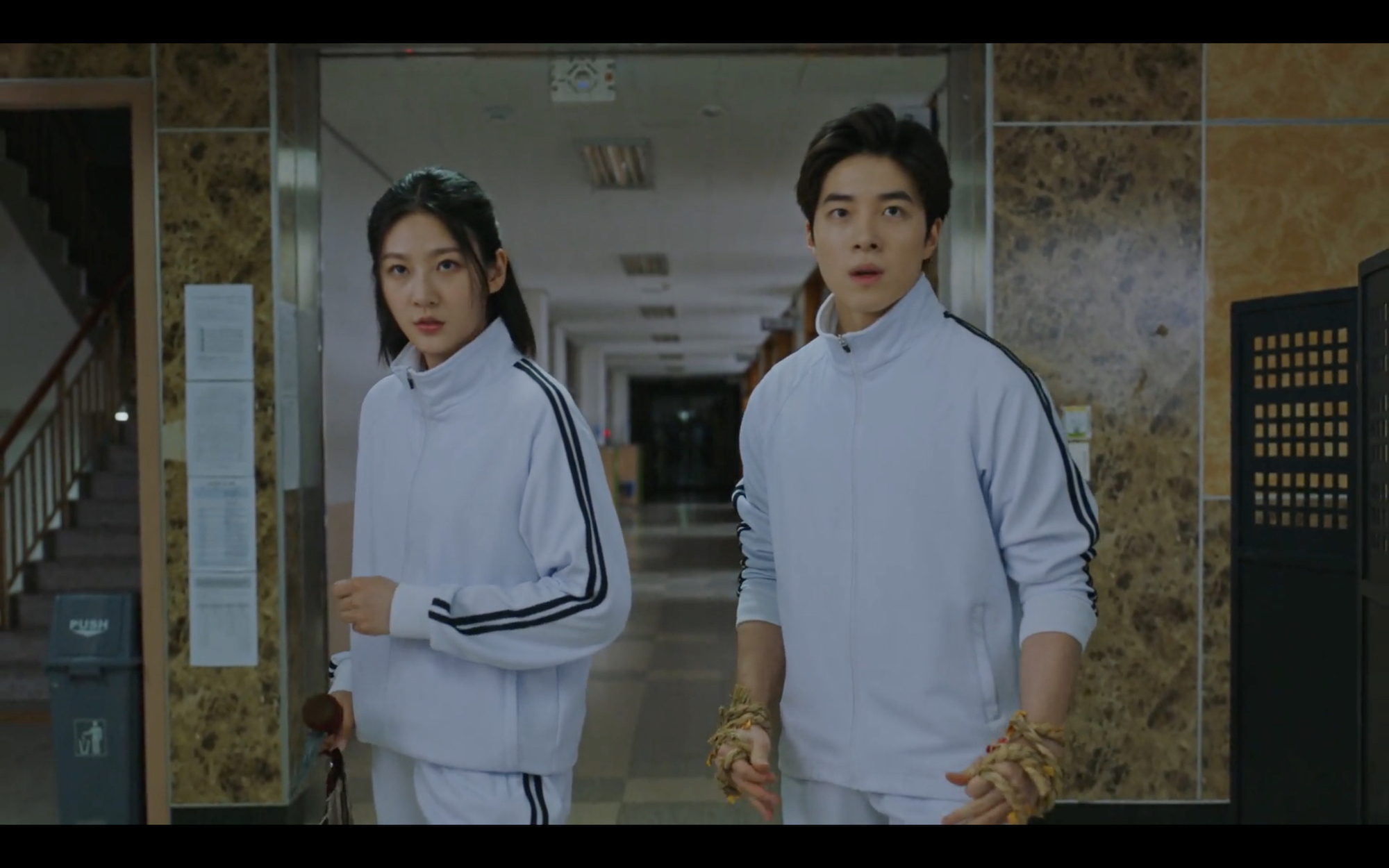 You don’t have to work very hard to sell me a story about two teenagers with special powers who have to fight an evil adversary in their midst — and that’s exactly what we have with The Great Shaman Ga Doo-shim. So far, it’s delivering everything I was hoping for: fun characters, action, and attitude. 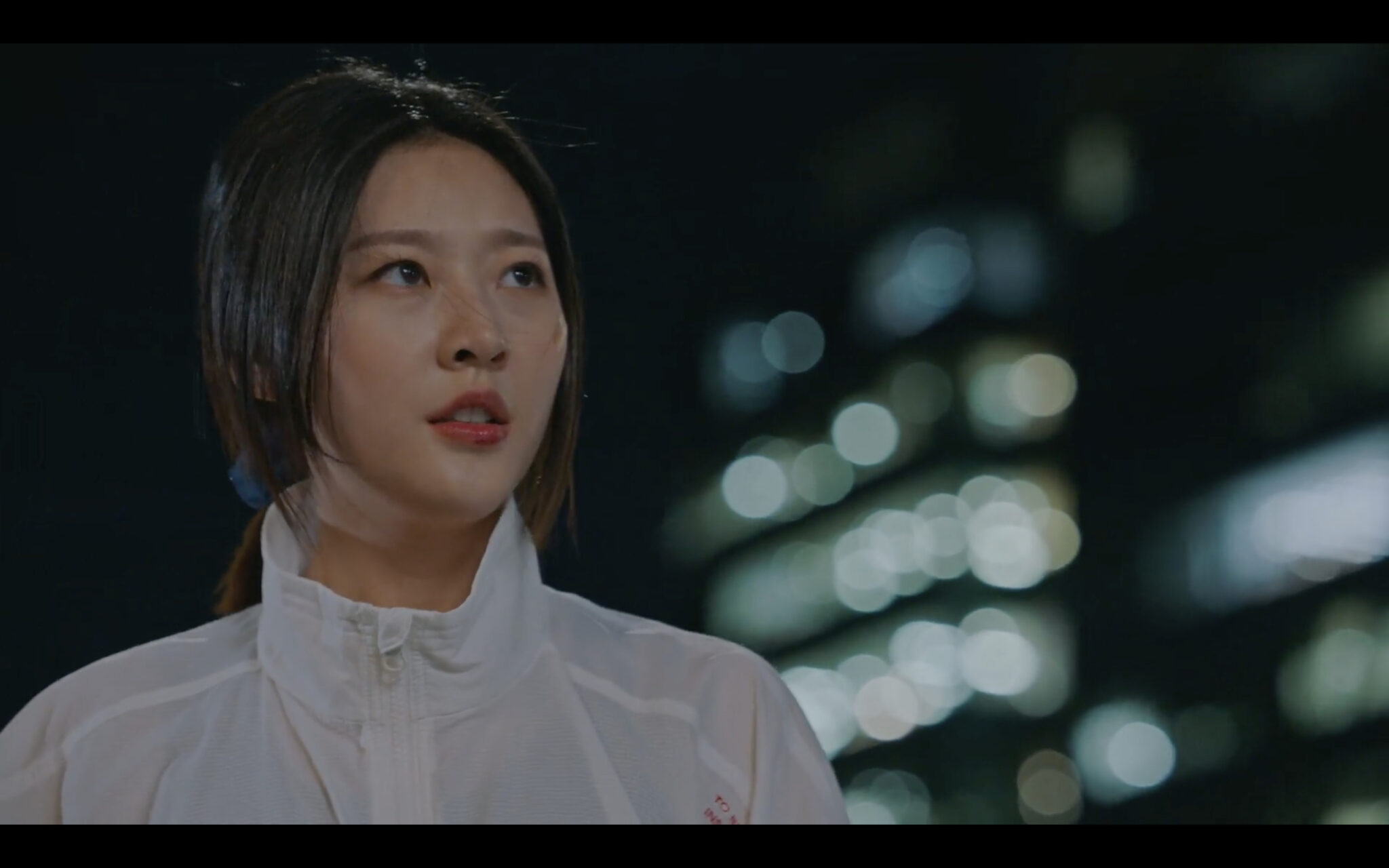 The Great Shaman Ga Doo-shim is the latest drama from Kakao after recent offerings like Lovestruck in the City and Mad For Each Other. But can I even call it a drama? It’s somewhere between drama and web drama, perhaps, in length, execution, and production quality. The series is only 12 episodes, and each is under twenty minutes in length.

With only about 32 minutes of story so far (between the two opening episodes) we don’t actually have that much plot under our feet — and yet at the same time we have a pretty complete setup, and a strong sense of where the drama is going. In terms of tone, it struck me as the Grade B high school version of Sell Your Haunted House, with possible School 2017 vibes, maybe? School rebels with a light touch. The plot also feels a lot like School Nurse Files, but without any tonal resemblance. 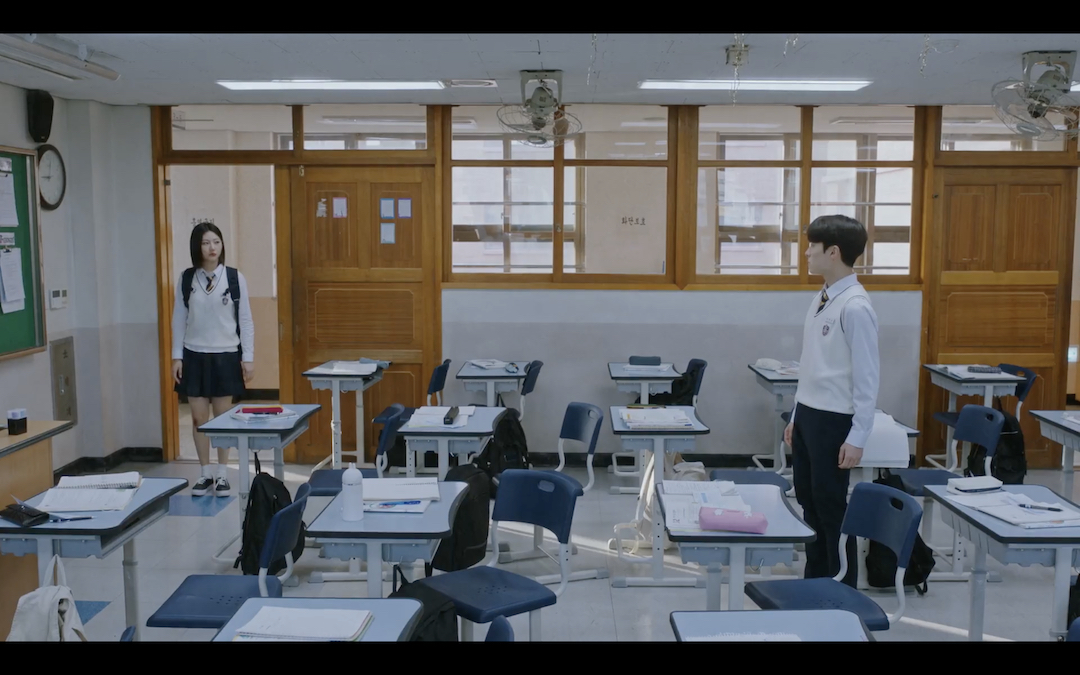 All three of those dramas I mentioned were led by strong heroines with a battle to fight — whether they wanted it or not — and it’s the same here as well. In The Great Shaman Ga Doo-shim, our heroine is the eponymous GA DOO-SHIM (Kim Sae-ron). We first meet her as a young girl, accompanying her grandmother (not exactly of her own volition) on an exorcism. Her grandmother is powerful, but her age makes it difficult for her to accomplish her task, and one fateful night, she begs Doo-shim to perform the exorcism in her place.

If ever there was a reluctant heroine, it’s Doo-shim. Even as a young girl she denies the powers that she clearly has, and wants nothing to do with the life her grandmother and mother live — except she really has no choice. She was born into it. She knows the incantations. She knows exactly what she has to do. 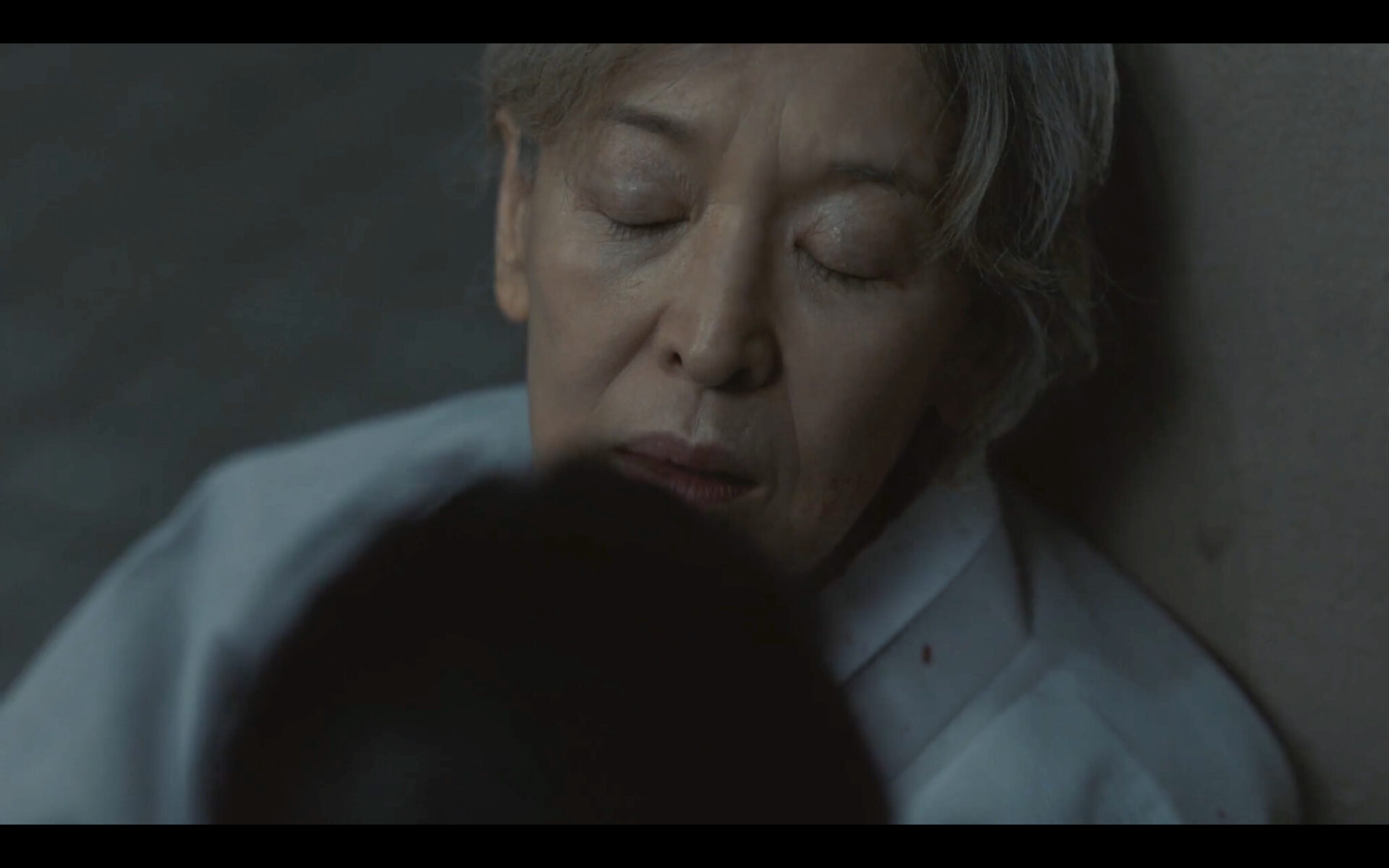 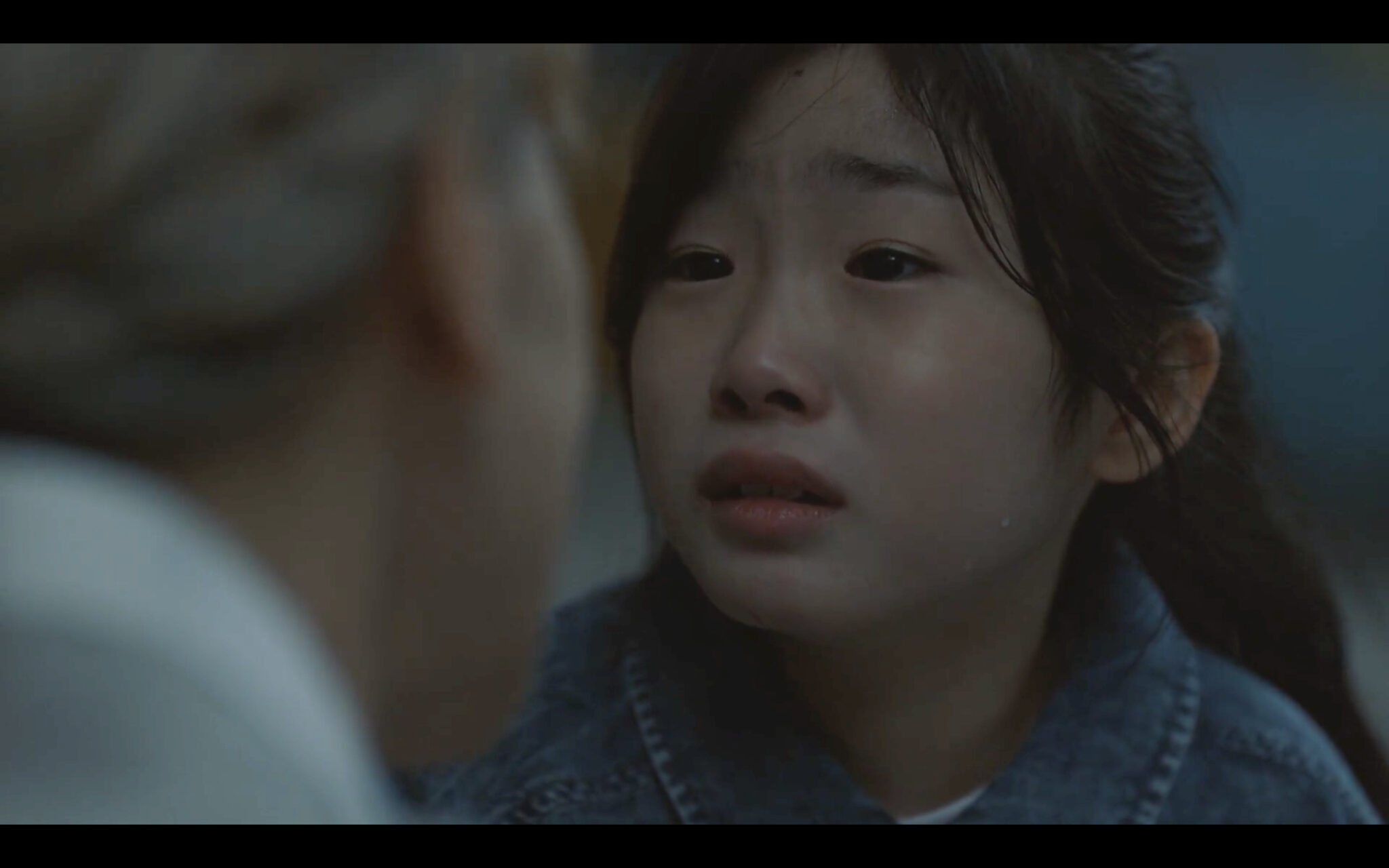 Though young Doo-shim does everything by the book, this particular demon is especially evil, and the young victim he’s possessing is unable to be saved: while possessed, he jumps from the rooftop of the building where Doo-shim has performed the exorcism. It’s this demon that becomes her enemy. He’s tied to her grandmother’s death, and promises to kill Doo-shim during her 18th year — it’s almost a fairy-tale trope — this idea of an age that she must be cautious of, and a fate that she must live through.

This evil spirit is one that possesses failing students, causing them to commit suicide. On first glance it seems a little too particular to be believable; on second glance, though, I really like how this story takes a terrible, tragic, and not uncommon event (student suicides) and gives it a deep, spiritual explanation. 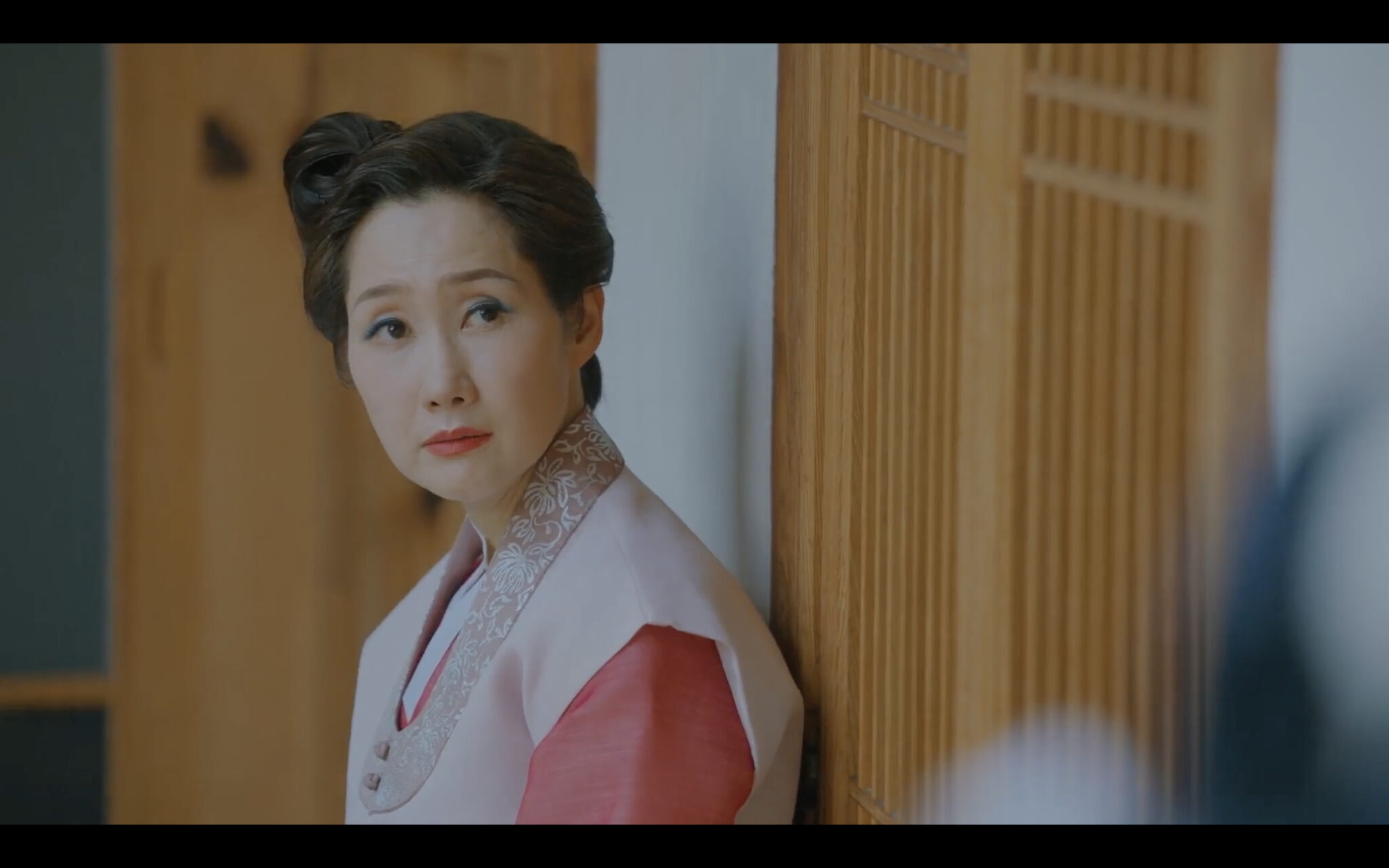 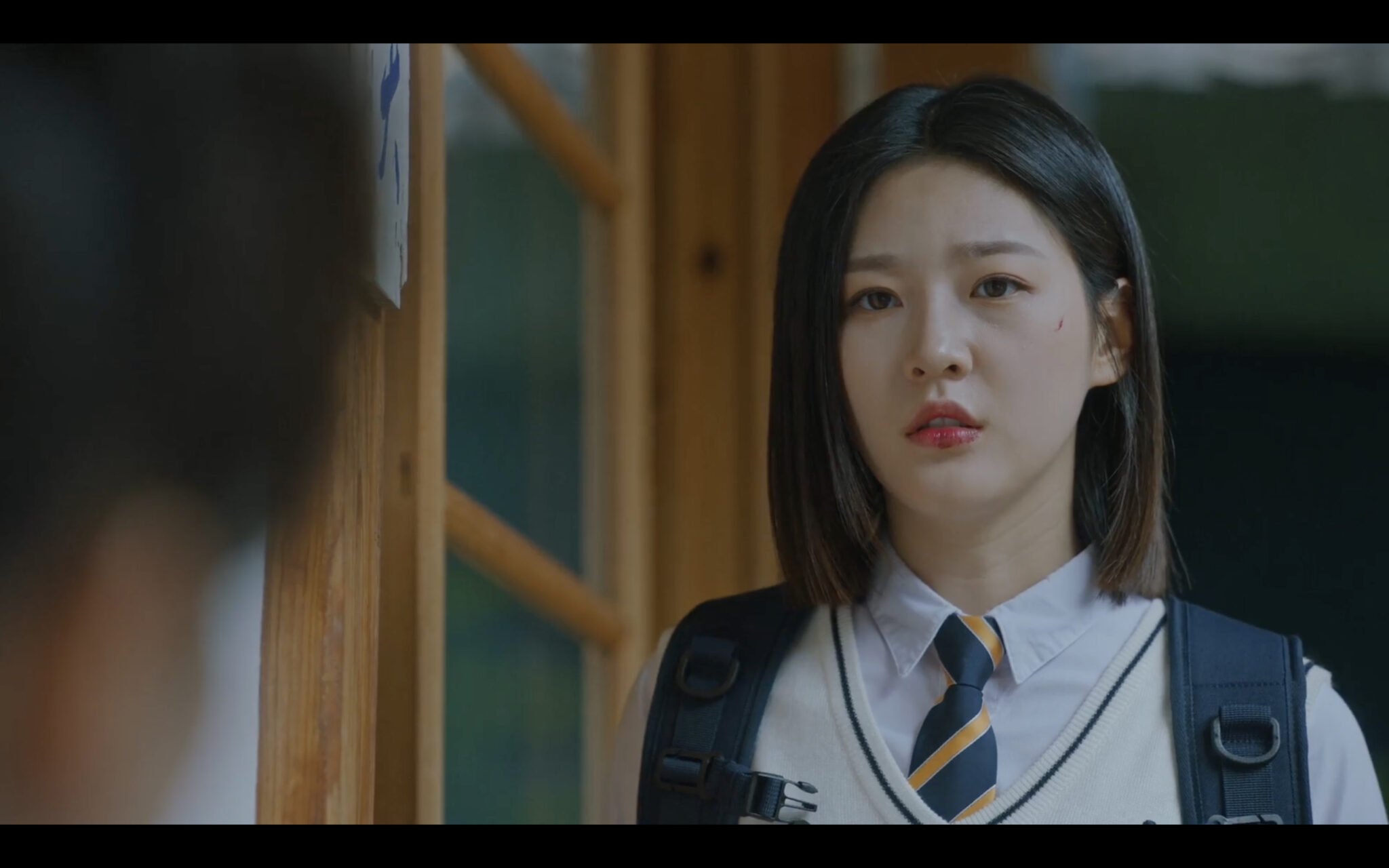 This idea comes full circle when we meet Doo-shim again, around her doomed 18th year. She’s just transferred to a new school — the most prestigious high school around. Her mother got her in through her connections as a well-known shaman, but poor Doo-shim just wants to go some place where she’s not recognized and not known as a ghost-seer or shaman’s daughter.

As one might imagine, Doo-shim fails right out of the gate with that one. A bloodied and battered Doo-shim arrives at her classroom as the new transfer student — and there’s clearly nothing ordinary about her, or the school. 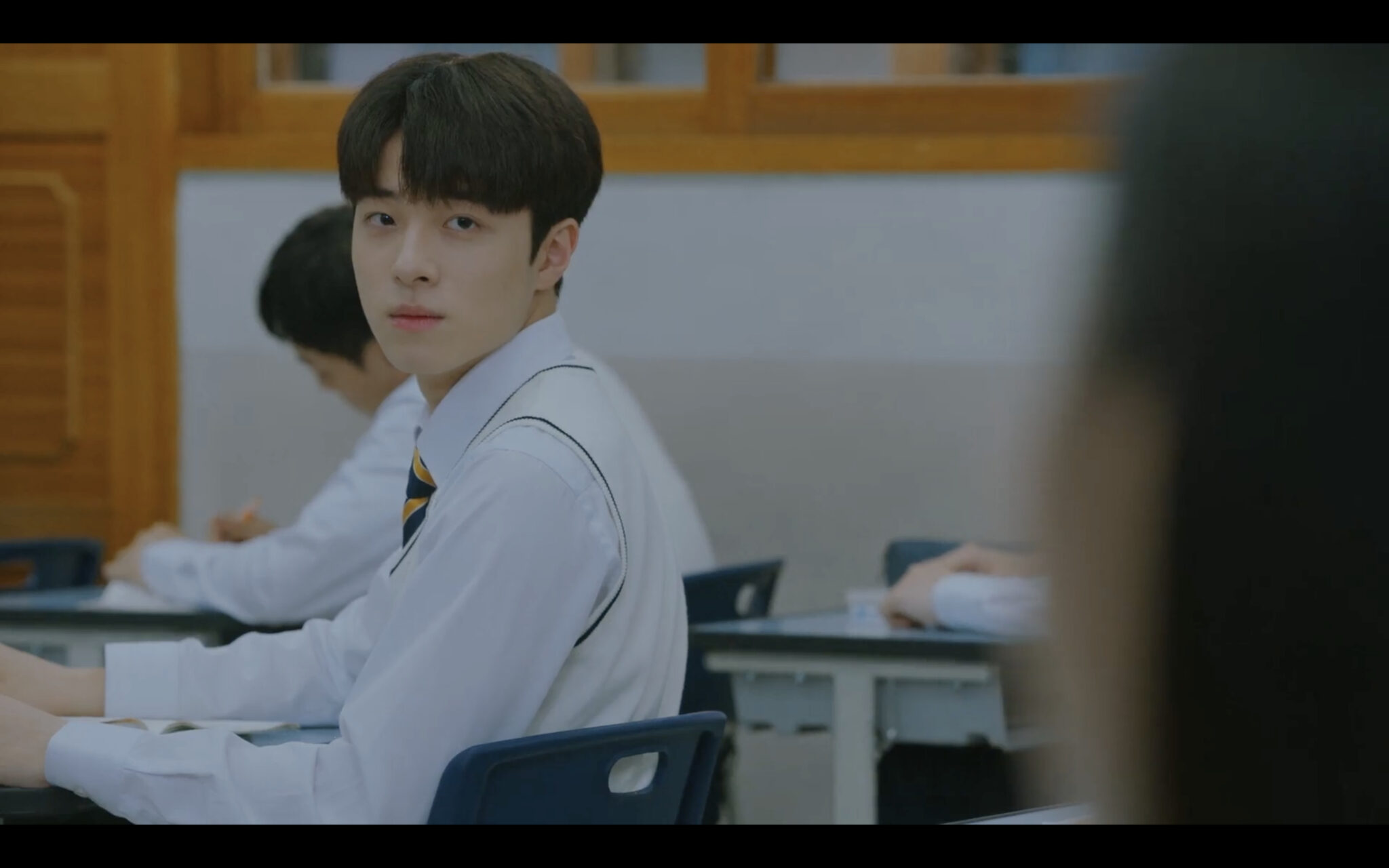 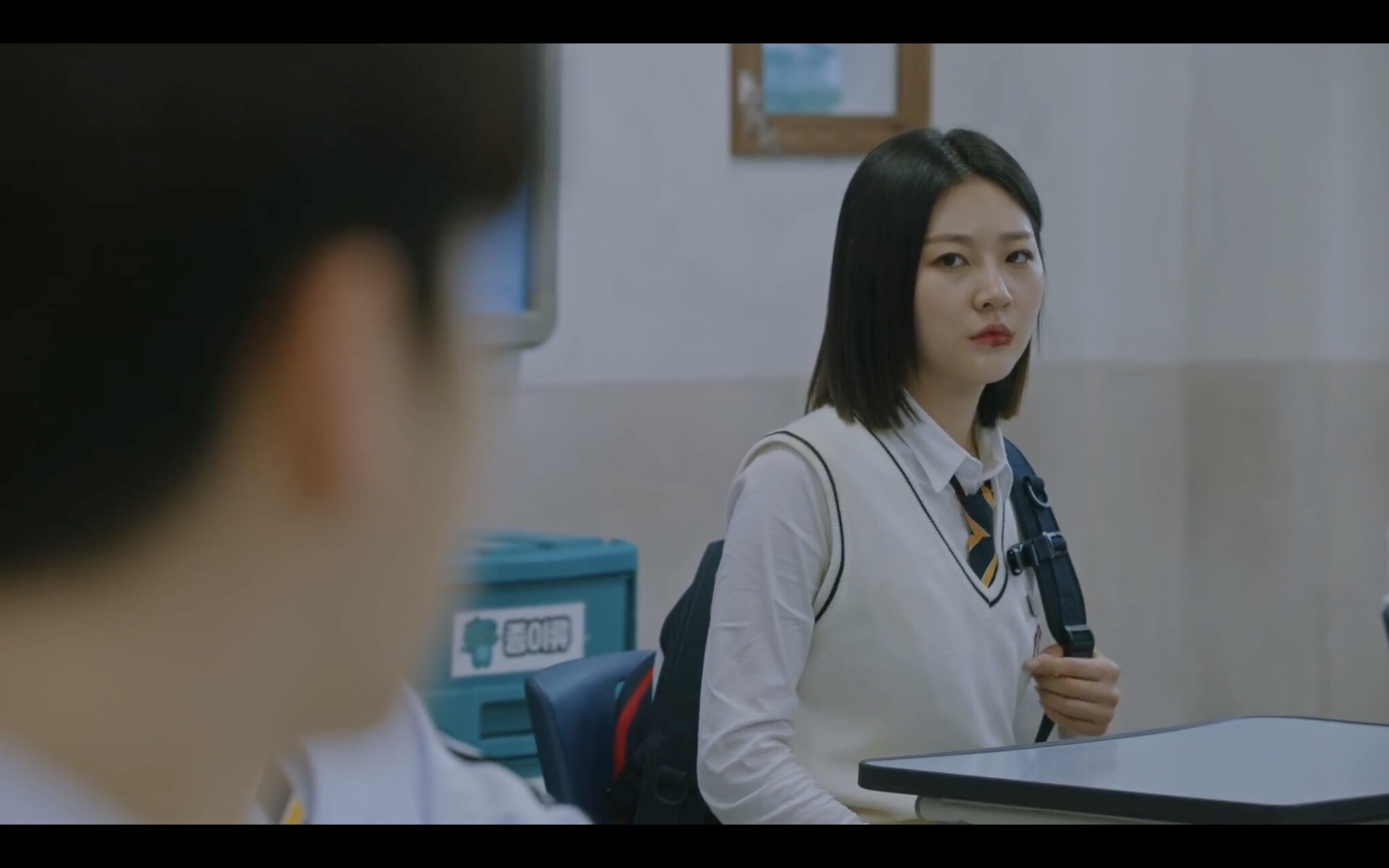 There’s a student in her classroom that seems immediately interested in her. He’s NA WOO-SOO (Nam Da-reum), top student and all-around nice guy. He stares Doo-shim down whenever they’re in class together, and we’re led to believe it’s not just a romantic interest: he seems to know something about her, and if the embrace he pulls her into at the end of Episode 2 is any indication, he’s willing to put everything on the line for her secret.

If there was one complaint I had after the drama’s premiere week, it’s that it’s too damn short! I can’t do these 15-minutes episodes. I’m used to a meaty 2+ hours a week — but sadly, this drama will only offer a little more than that in its entirety. But I suppose that’s a compliment: I liked the characters and the setup so much that I wanted more. That’s not to say the plot or script felt too skeletal — on the contrary, I got what I wanted from the story, I just wish there was more of it. It strikes me that this would be a very good drama to binge through once it’s been aired. 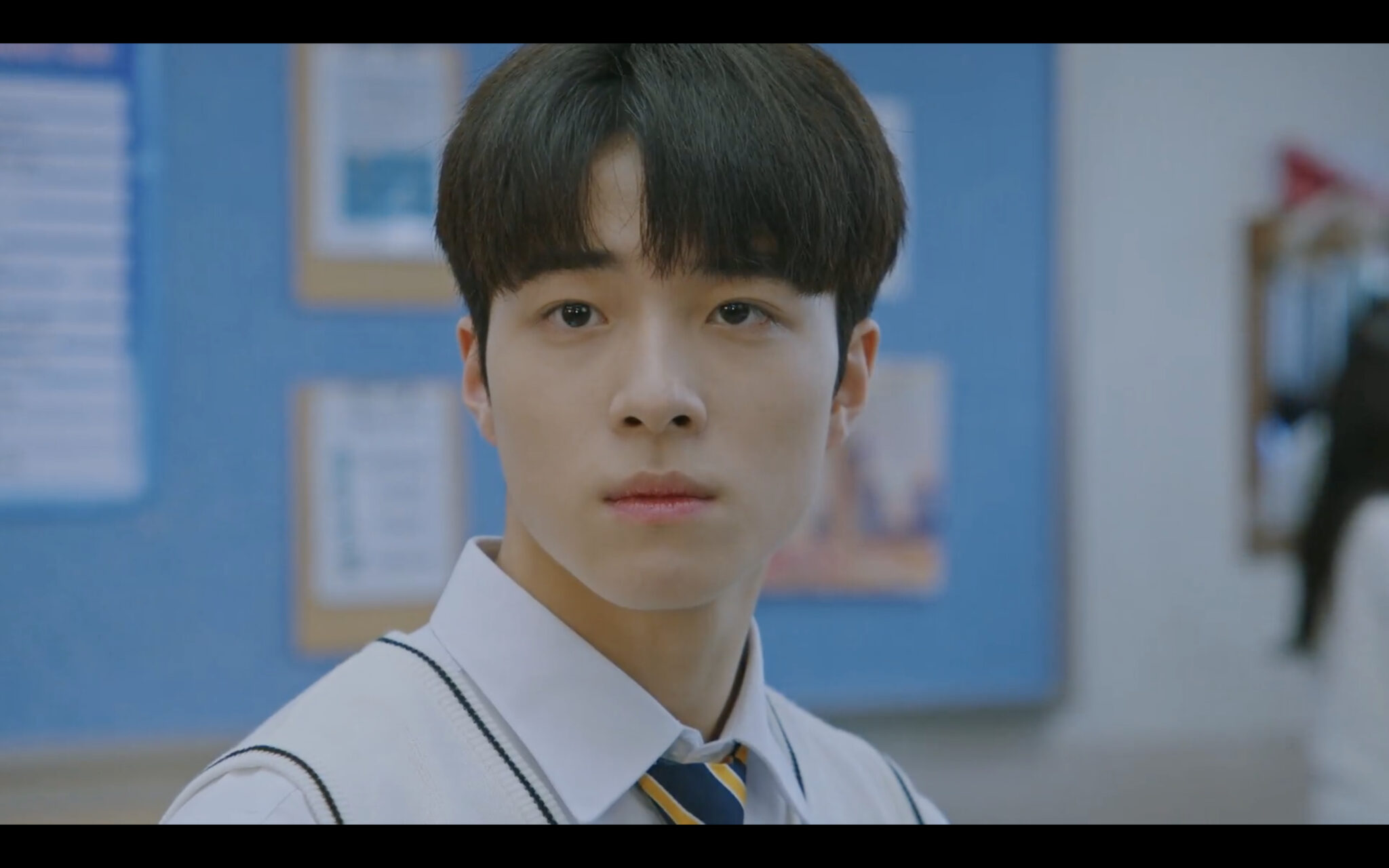 Like I said earlier, this drama not only has a bunch of storytelling elements I really enjoy, but it has this fun, less-polished production level to it that makes me think of “teen” shows I loved in the past (I won’t name them here to protect the innocent).

The cast is also a lot of fun. In fact, I don’t know anyone that’s not rooting for Nam Da-reum and the wonderful career that’s ahead of him. Unlike other child actors that have been pushed a little too fast into mature roles, I think this is another great step for him. And he’s growing up so nice! *tear* 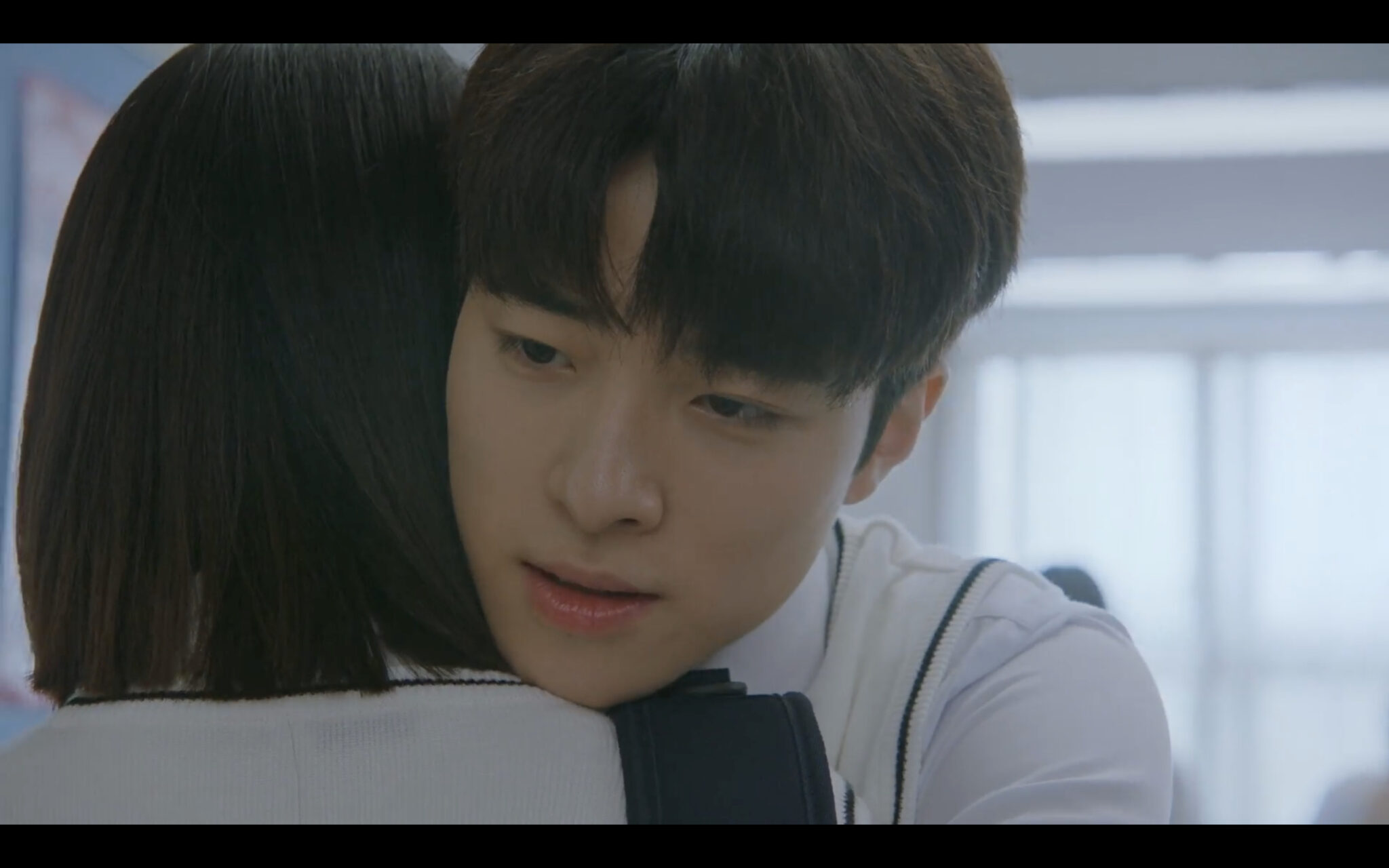 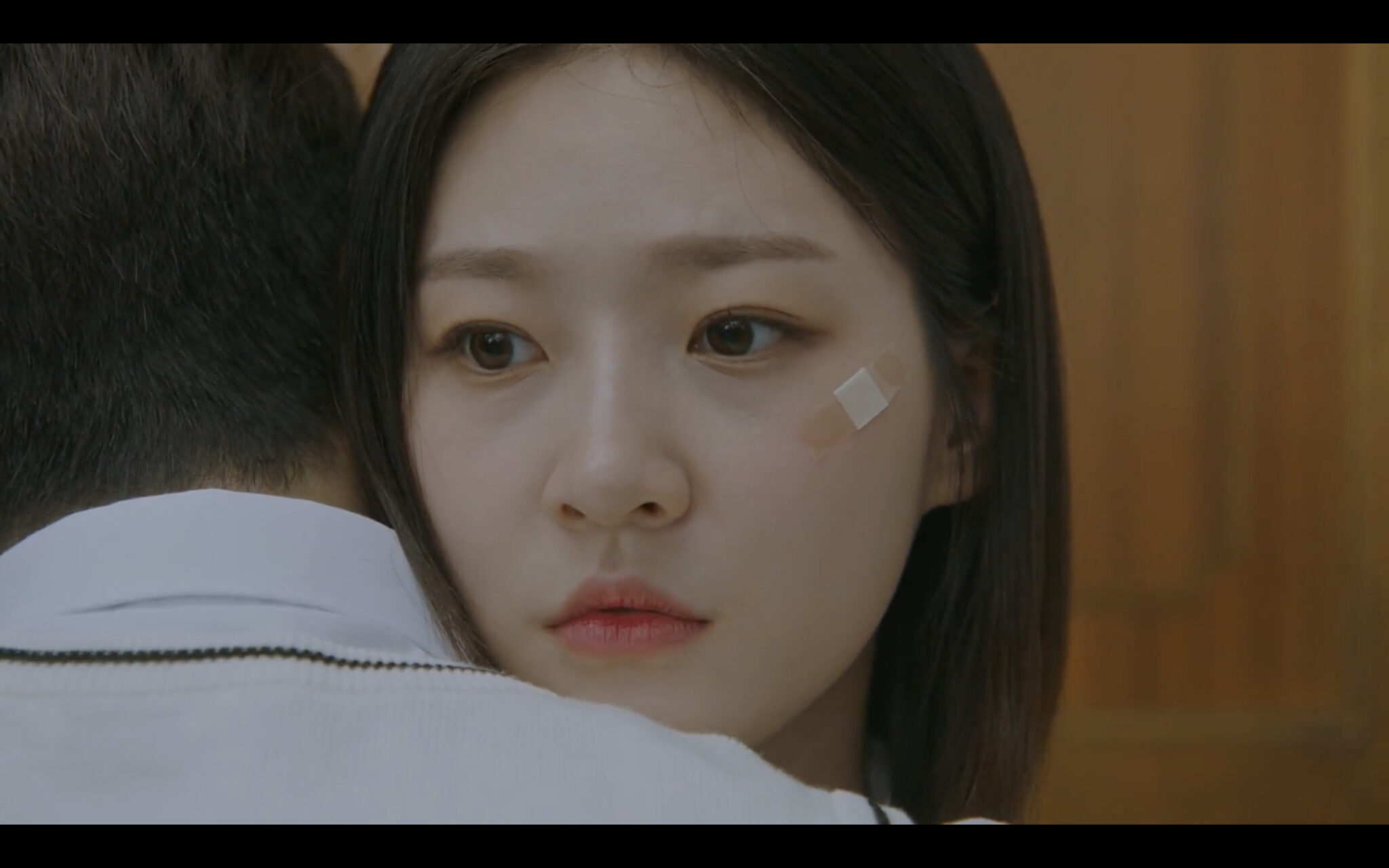 I probably like Kim Sae-ron just as much, and have been following her career for a while (anyone remember Block B’s Jackpot?) — and she’s just great here as Doo-shim. From the spunky bob to the haughty annoyance she projects towards others, Kim Sae-ron pulls it off without being bratty or off-putting. Perhaps that’s because we also hear her interior monologue at the same time as we see her behavior. We know the world she lives in, the burden she carries, and the impending doom of trying to survive her 18th year.

What the drama does best, though, is set up the fun to come, because early on, we see Doo-shim and Woo-soo in action together at the school. Presumably, this is a scene from our drama’s climax, or near it. The two look like they’ve done this before, and are preparing for war, with a hatchet and rope (a lasso, maybe?), and some determined game faces on. But, of course, what makes this scene all the more satisfying (and promising) is the camaraderie between our leads. Here our drama gets top marks for giving us a taste of where the story will go, but keeping us curious and unsure at the same time.

As Doo-shim settles in at her new school — known for suicides amongst failing students — we can only imagine what she must confront there. Again, kudos to the drama: I’m as interested to watch her confront her fate as I am to see her and Woo-soo get from the point of awkward staring to where they’re a united, fighting front. Gosh, what is it about teen heroes that’s just so much fun?! 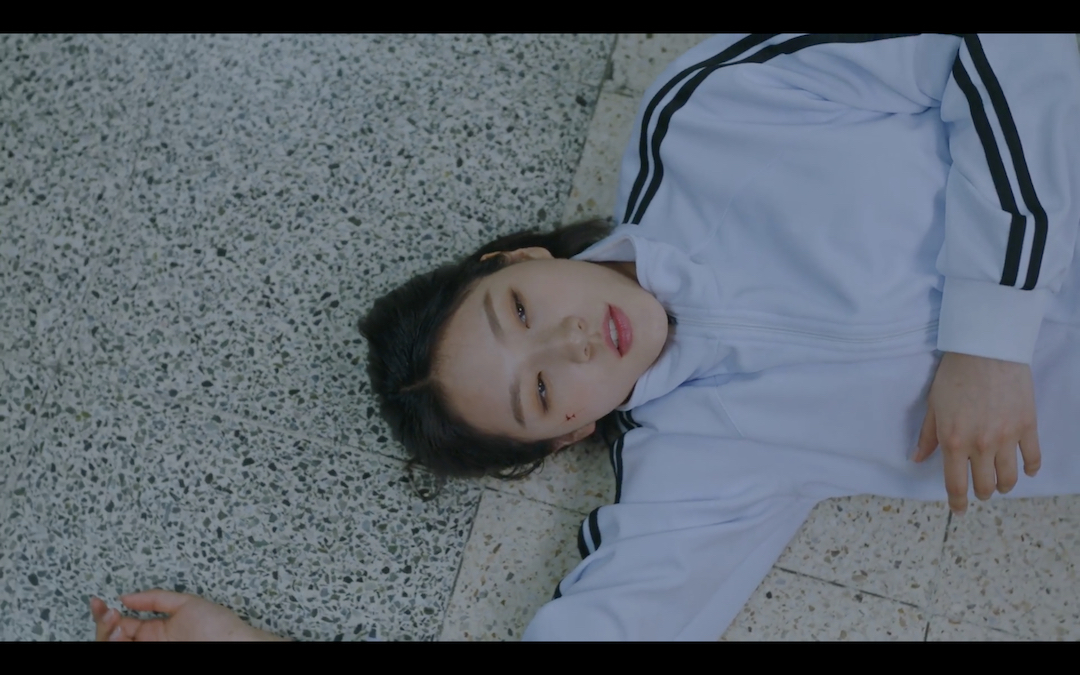 She isn’t in the school for more than a few minutes when she gets in a battle with a possessed student who winds up jumping out of the window to his death.”

Um, she didn't get into battle with the possessed student. She and her opportunistic mum made a stop in Cheongdamdong first to meet a client. The possessed client tried to choke her mum which forced Doo-shim to intervene.

Then later, she arrived at the school bloodied and bruised after the possessed student had already jumped.

The mum looks nice, she used a poor ghost who wants to meet his mother to scam people for 10 years and her own daughter to make connections with rich people. I understand why GDS doesn't want to be part of this...

NWS is more mysterious for now. But looks like they will form a badass team.

The episodes are short and the fact they put twice the same scenes doesn't help...

You're so right! Nam Da-reum was the main reason I started watching this - like many others I'm assuming. Though I don't think this role will call for a big stretch in his abilities.

Couple of things I'm confused about though - I don't think the evil spirit killed the grandmother? There was a man hiding in the corner who stabbed her and presumably released the evil spirit she had already captured right?

Also I think the hug at the end wasn't Woo-soo's emotions but rather him being possessed by the Hyun-soo the dead ghost boy Doo-shim's mom has been using? We see a spirit entering him as Doo-shim walks past him to leave.

I also thought it was Hyun-soo's ghost possessing him. I wonder why Hyun-soo wants Doo-shim to stay though. What a cliffhanger!

I have a soft spot for Hyun-soo's ghost. I hope he gets to meet his mom soon.

I immediately felt for poor Hyun-soo too. It sucks that he's basically been kept as a performing puppet ghost by Doo-shim's mom for a decade. Hope the show provides both Hyun-soo and his mom some closure.

That little kid I saw in "Boys Over Flowers" has grown up handsomely into a fine young man... :)

I just wish the episodes are longer both of the leads are great and they suit each other. Drama is interesting as well

Just loved the opening of ep 1 with these two. Two episodes in and I already want these two in a 2nd season with full length eps.

With the star power of Kim Sae-ron and some of the supporting cast, I am surprised to find out this is a web-drama (and a short one). It reminds of "Bring It On, Ghost".

OMG, the lead is the little girl in 'Man from Nowhere'!

I'm liking this so far but there is so much death already! I don't like all the suicides.

If this is a lot the dynamic in Sell Your Haunted House, I won't mind that! A shorter, high school version of that sounds good to me!

Oh, is this Nam Da Reum who played young Bangwon in Six Flying Dragons? He has grown up a lot!