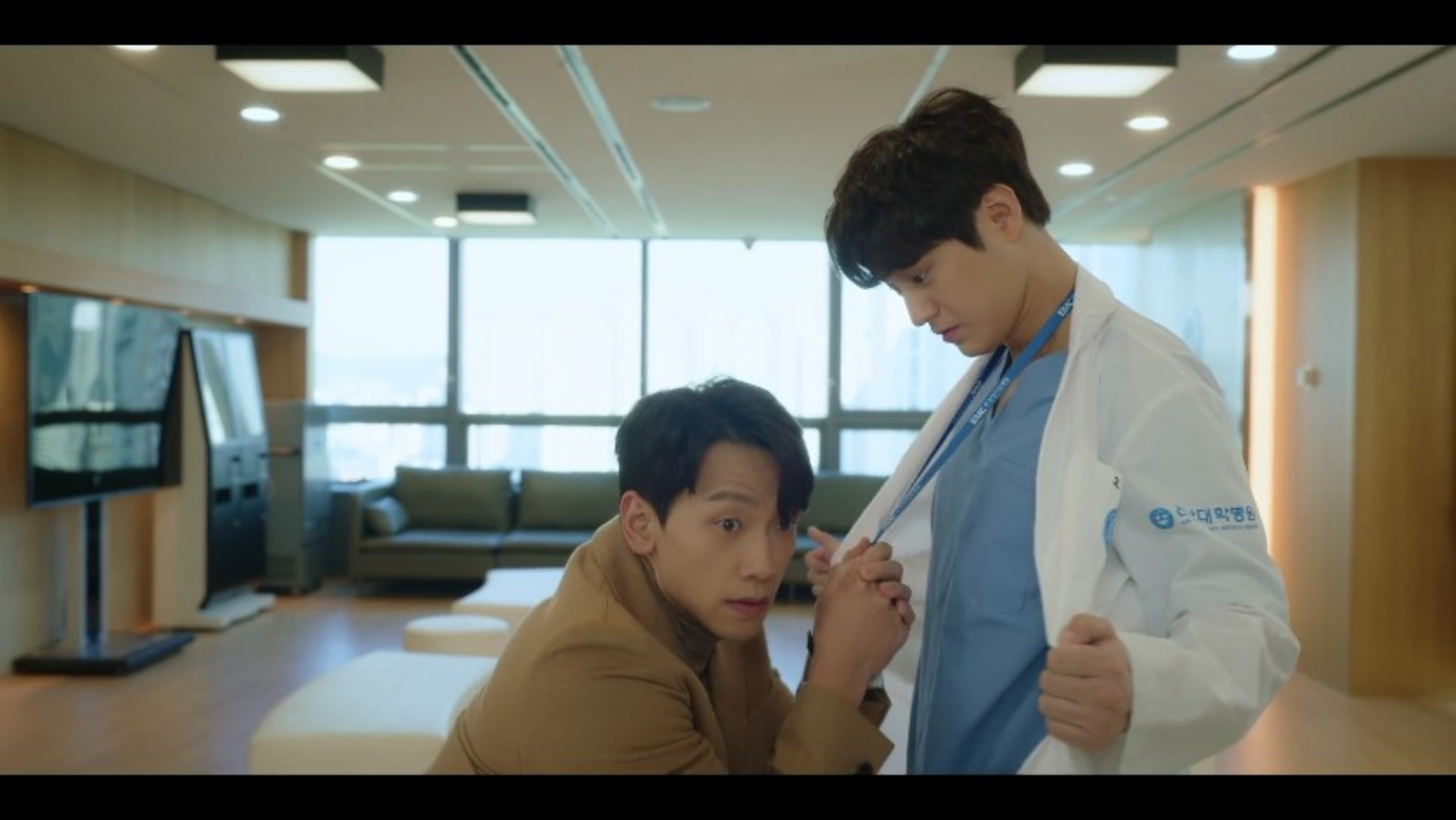 Grab some tissues, because this week’s Ghost Doctor serves up laughs with a side of tears. While the usual ghostly hijinks abound, we also take an emotional look at what happens to our coma ghosts after they wake up or pass on. 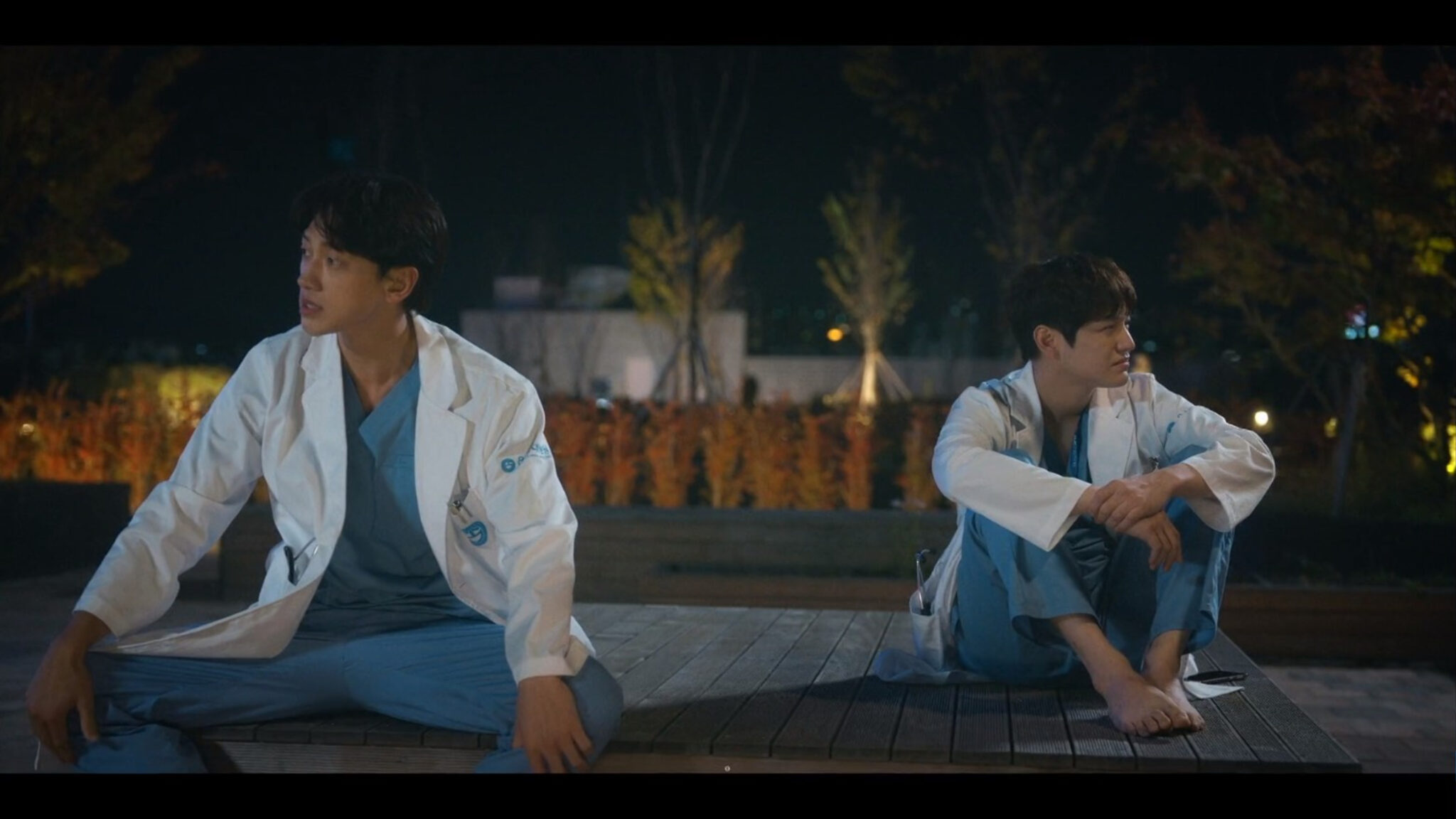 I don’t know about, y’all, but I signed up for laughs, so when Ghost Doctor punched me in the feels this week I was surprised — pleasantly surprised. Obviously when the setting of a drama is a hospital and half the characters are either dead or have one foot in the urn, it’s logical that the show would address death in some manner, but I half expected Ghost Doctor to skirt around the topic in order to maintain the drama’s lighthearted tone.

It definitely seemed like we were off to a humorous start this week, too, because the recent bombshell that Young-min supposedly has only a month to live was noticeably glossed over as we resumed our story with Young-min and Seung-tak celebrating their successful surgery. As they set aside their usual bickering and bask in the post-surgery glow, Seung-tak expresses a budding desire to save lives. Young-min encourages him to start putting forth his own effort, but Seung-tak insists that his time as a doctor is only temporary.

These two never stay civil for long, though, and things devolve into bickering and pouting after they try to figure out why only Young-min can possess only Seung-tak. In a classic case of opposites (spiritually) attract, they discover that they have nothing in common and are disappointed to be stuck with each other. However, in his frustration, Young-min inadvertently reveals that he was once possessed by a ghost. 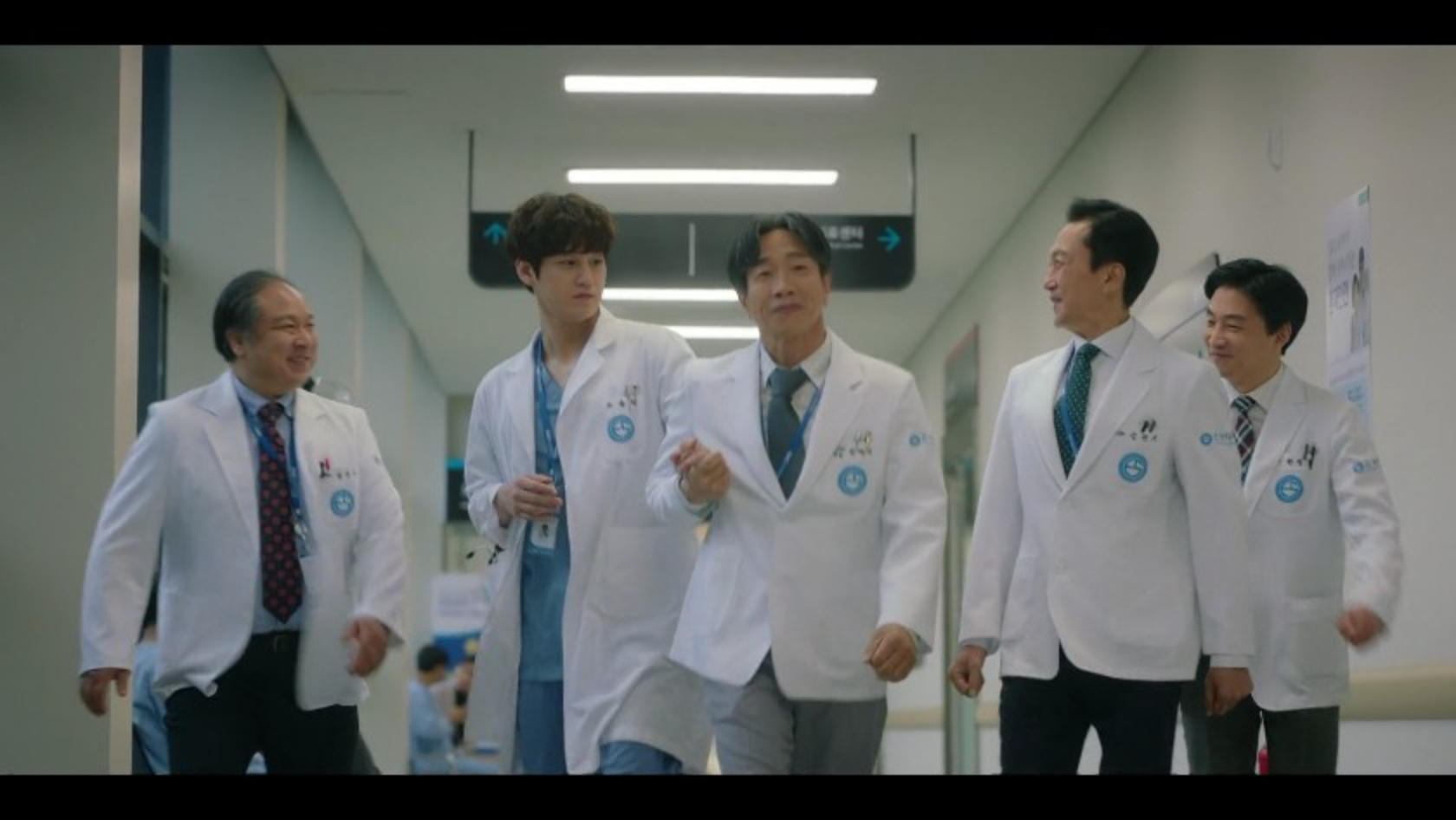 Seung-tak doesn’t immediately pick up on the clue, but when the other doctors in his department start comparing him to Young-min (who also performed a miraculous solo surgery when he was nothing but a wee resident), things start to click. He asks Young-min about his first surgery, but Young-min — always concerned about Seung-tak’s cardiovascular health — refuses to share his story unless Seung-tak does a 100 squats. Unsurprisingly, Seung-tak would rather skip leg day than find out the truth.

As the rumors continue to spread and grow, more and more people begin looking at Tae-hyun. Doctors are begging him to assist with their surgeries, and his mother SUNG MI-RAN (Yoon Da-Kyung) is so proud of her baby boy that she wants to throw him a party. Seung-tak, however, does not enjoy the attention. Too many eyes are on him, and the last thing he needs is for someone to see him talking to Young-min and think he’s going cray-cray. 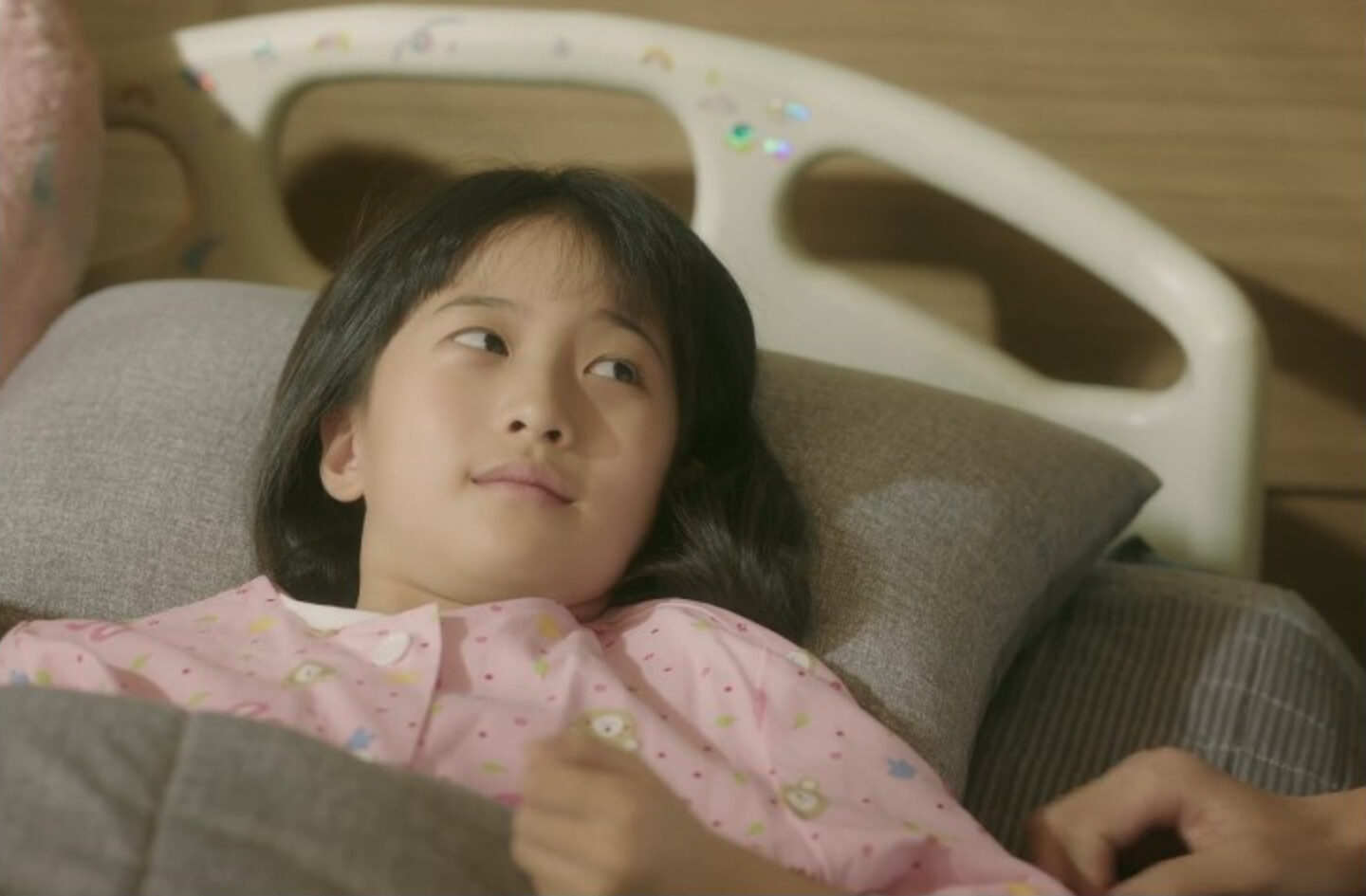 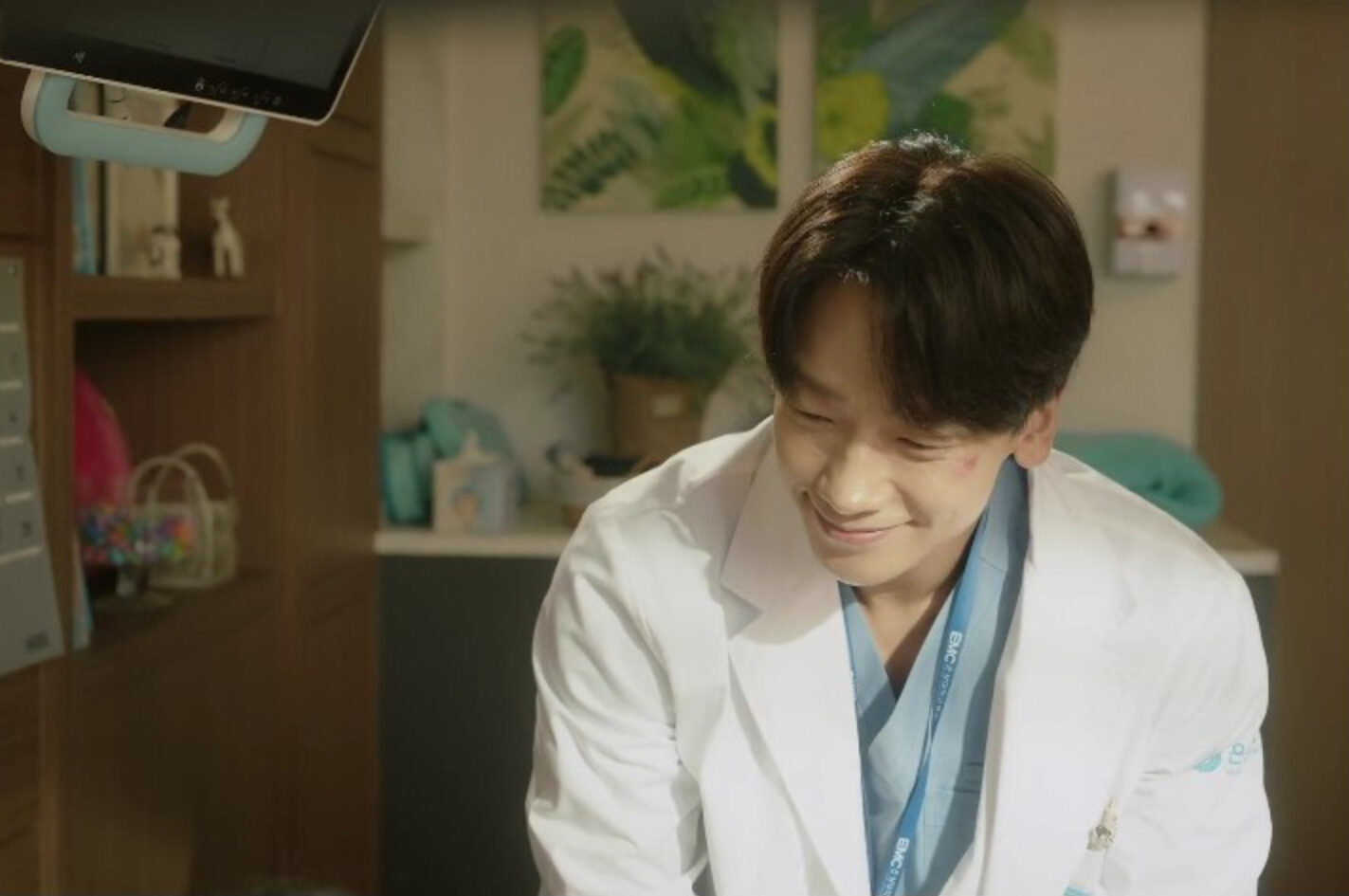 There’s an added layer to his hesitation, though. He overheard the other ghosts talking, and he now knows that Young-min is slowly dying because he keeps borrowing Seung-tak’s body. Even though part of him is beginning to revel in the high that comes from saving lives, he can’t bring himself to continually experience that thrill at Young-min’s expense.

So when Young-min — on Seung-tak’s behalf — agrees to perform the aortic valve replacement for LEE JI-WOO (cameo by Hani), Young-min’s favorite idol — OMG! That shrine in Young-min’s apartment! — Seung-tak initially calls out “lazy” on the day of the surgery. His conscience gets the better of him, though, and he shows up just in time to relieve the clumsy BAN TAE-SIK (Park Chul-min) from making a fatal surgical mistake.

Following the surgery, Young-min reveals that Ji-woo was his former patient, and he’d promised her when she was younger that he would perform her replacement valve surgery when the time came. He understands Seung-tak’s hesitation to perform the surgery, but Young-min has already come to terms with his impending death. Rather than being a useless ghost during his remaining time, he’d prefer to borrow Seung-tak’s hands and save lives, assuming Seung-tak will let him. 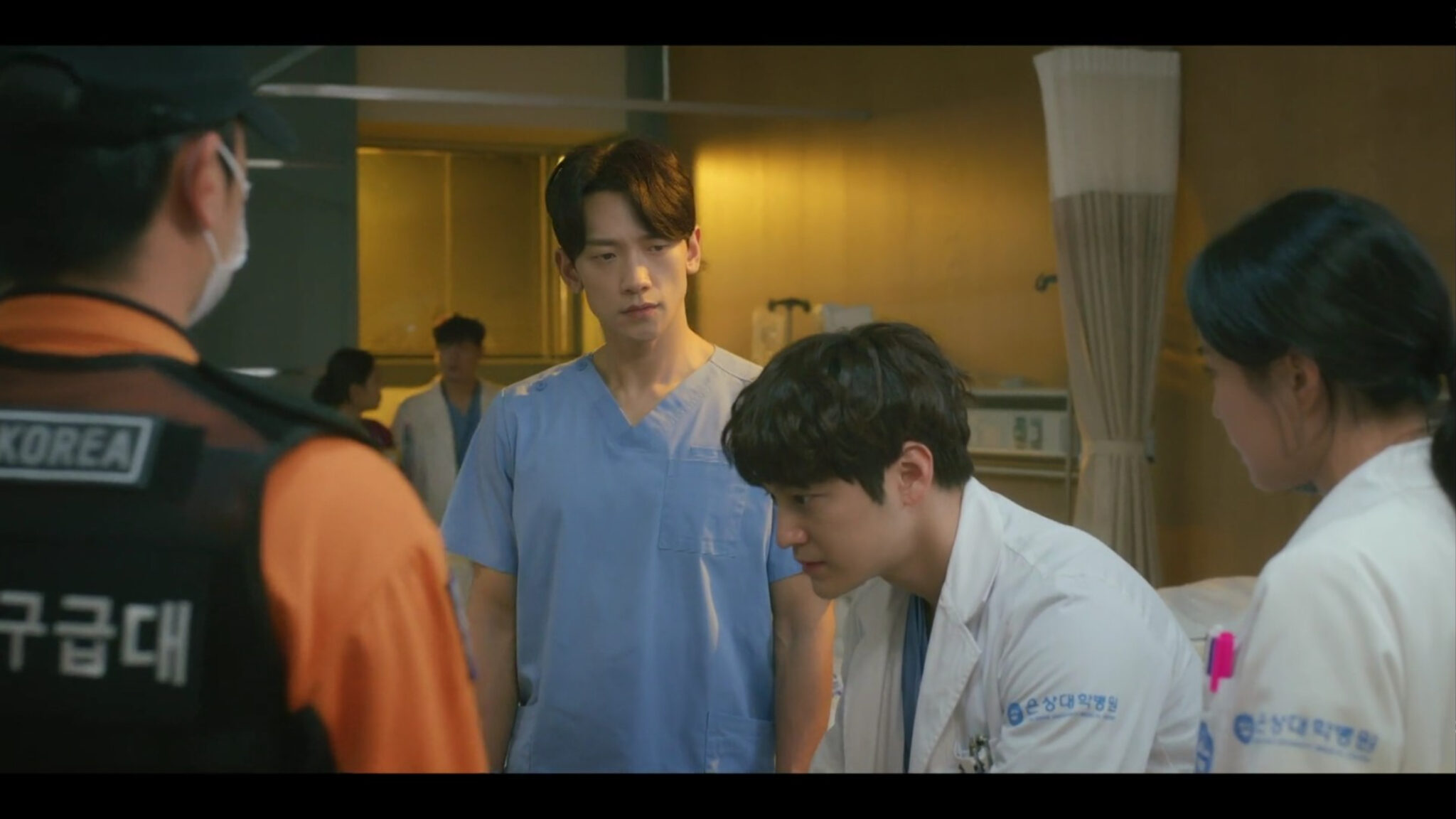 As Seung-tak weighs Young-min’s offer, a patient arrives in the ER, and the situation is dramatically similar to the night Young-min was possessed by an unknown ghost. Like Young-min in the past, Seung-tak feels an overwhelming urge to save the patient despite his unskilled hands and his peers insisting that there isn’t a doctor on hand to save the man. Caught up in the moment and feeling desperate, he teams up with Young-min again, but following the surgery he still feels guilty knowing he’s bartering Young-min’s life.

Without getting too specific, Seung-tak confides in Soo-jung, and she offers up the same advice Young-min gave him earlier: improve your own skills and do some squats. While he quickly vetoes the squats, he’s noticeably quiet as he considers her other suggestion. 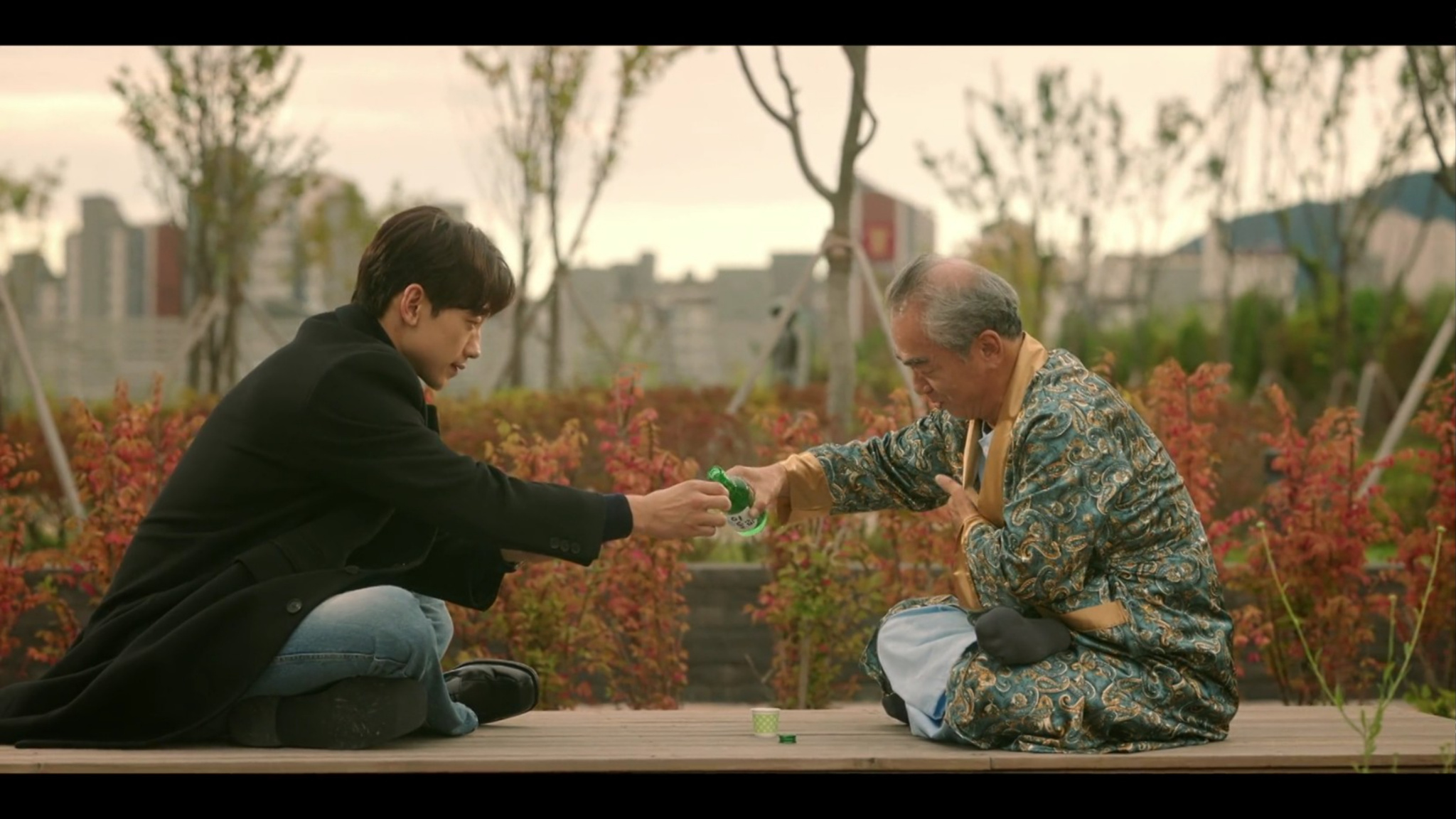 Seung-tak has some time to think on his options while he and Young-min shift their focus back exposing the elaborate plot that landed Young-min in a coma in the first place. Se-jin repairs the motorcyclist’s skull, but he sadly wakes up without any memory of his ghostly promise to expose Seung-won’s murderous plot. Without the motorcyclist to confirm Seung-won’s involvement in Young-min’s accident, they must focus on Kwang-deok’s attempted murder in order to expose the bad guys.

Kwang-deok, however, is still a father who cannot bring himself to see his son arrested. He apologizes to Young-min, not only for being the reason Se-jin left him, but for also selfishly asking Young-min to not reveal his son’s crimes. Instead, he gives Young-min and Seung-tak his lawyer’s contact information. Prior to his surgery he wrote Min-ho out of his will, knowing it would be a more fitting punishment for his ungrateful and corrupt son. 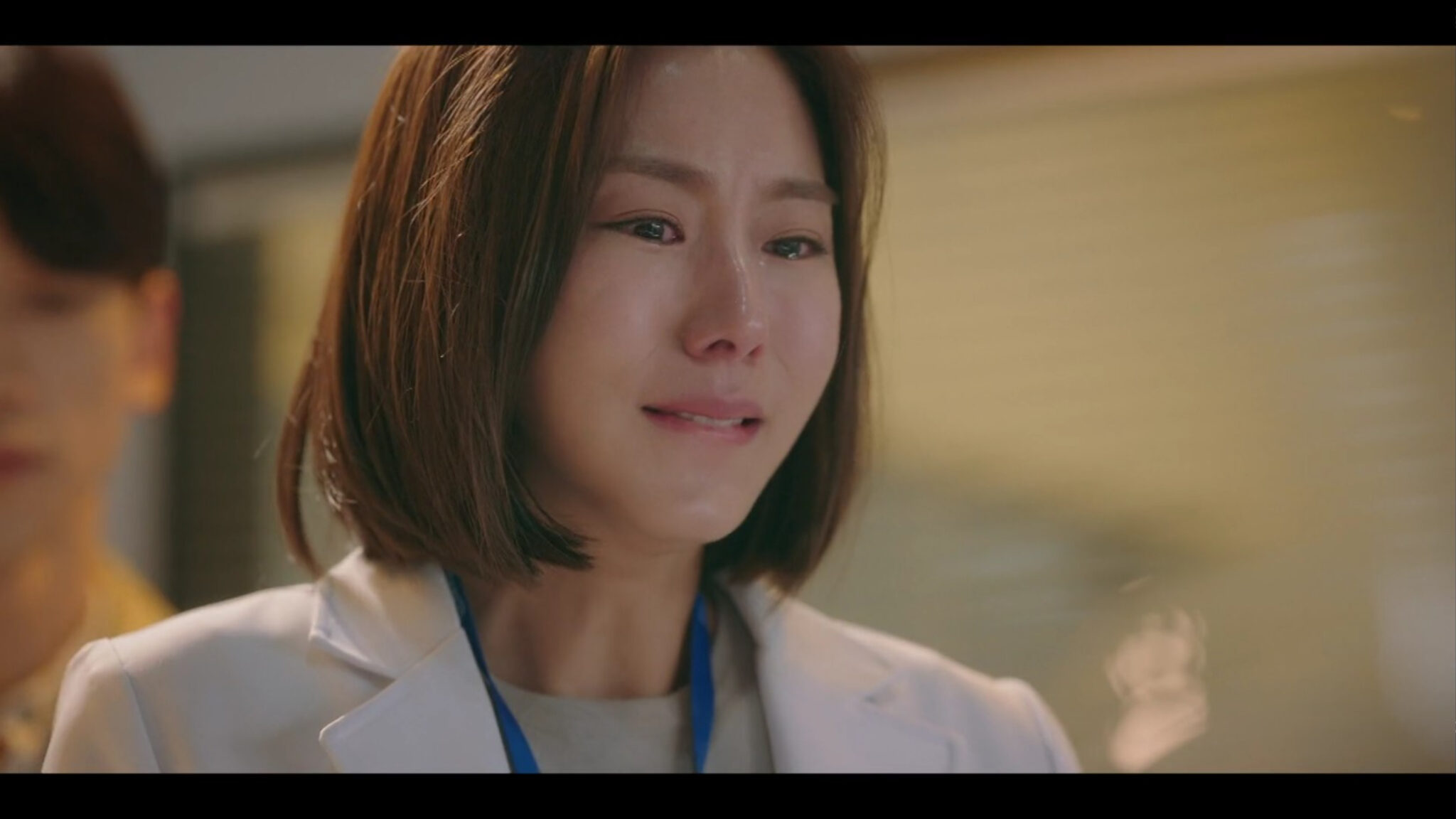 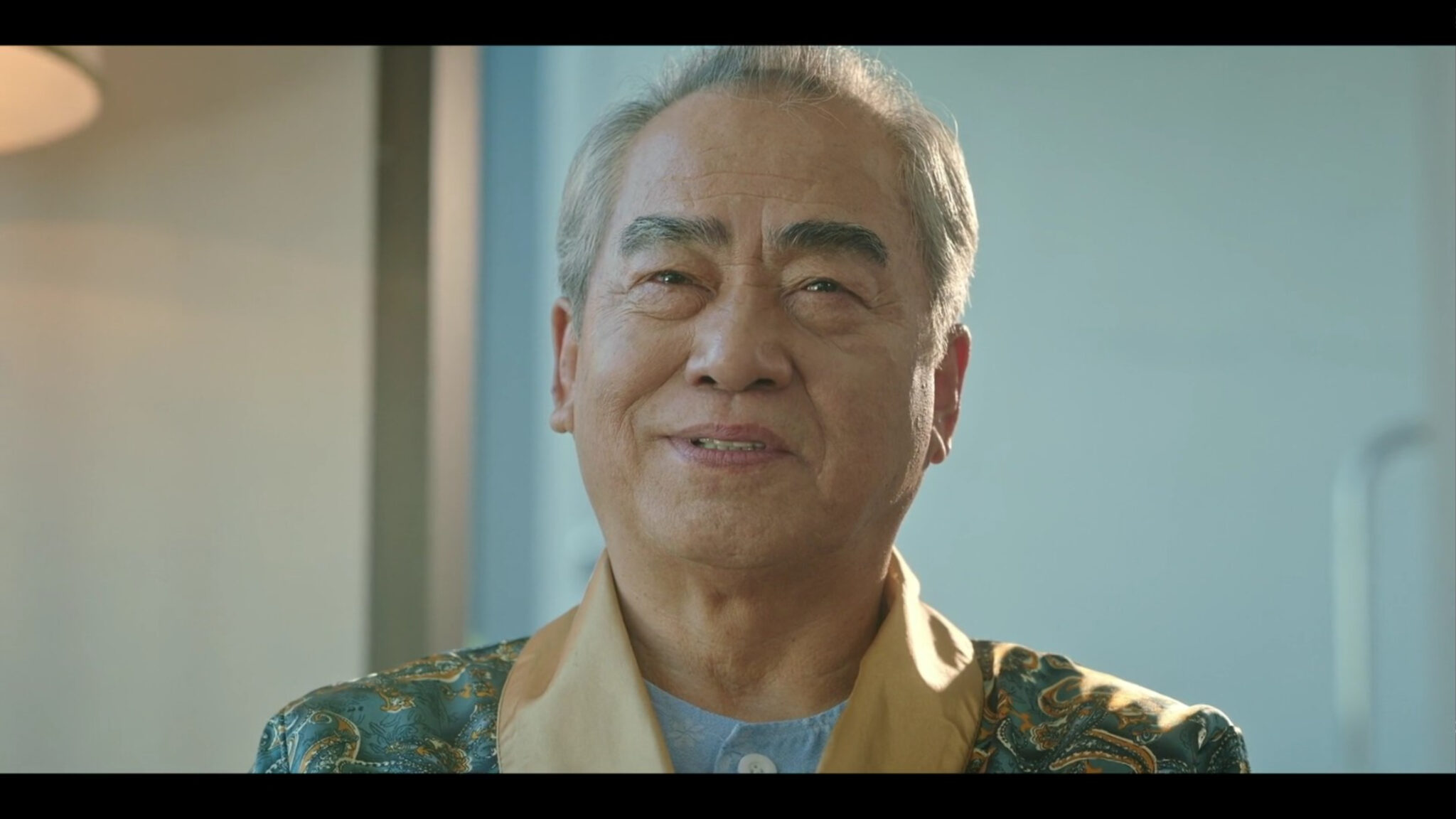 As Se-jin tearfully declares her father brain dead and removes his life support, Tess joins Kwang-deok and offers to play a round of baduk. The two scenes, one somber and one mirthful, are interwoven and reveal a surprisingly — for this drama — poignant message that death, for some, is freeing.

As Kwang-deok fades into brightness, it begs the question: why is Tess, who is supposedly fully dead, still lingering around the hospital? After the reveal that Tess was once a friend and fellow doctor of Seung-tak’s grandfather, I think it’s now fairly safe to say that he was the ghost who possessed Young-min when he was a resident. But has he not moved on because he enjoys helping where needed, or does he need to pass the torch on to a replacement, like Young-min, first?

It’s a theory that certainly aligns with the theme of mentorship that is so prevalent in this drama. And now that Young-min has lit a spark inside Seung-tak, it’s possible the endgame for this story is that Young-min will take over for Tess as Seung-tak becomes the next rising doctor. On the other hand, given the question Young-min asked himself this week, I feel like his journey isn’t to replace Tess, but to learn that every life is precious and worth saving — even if he feels useless and incapable of using his god-like hands to bring them back. 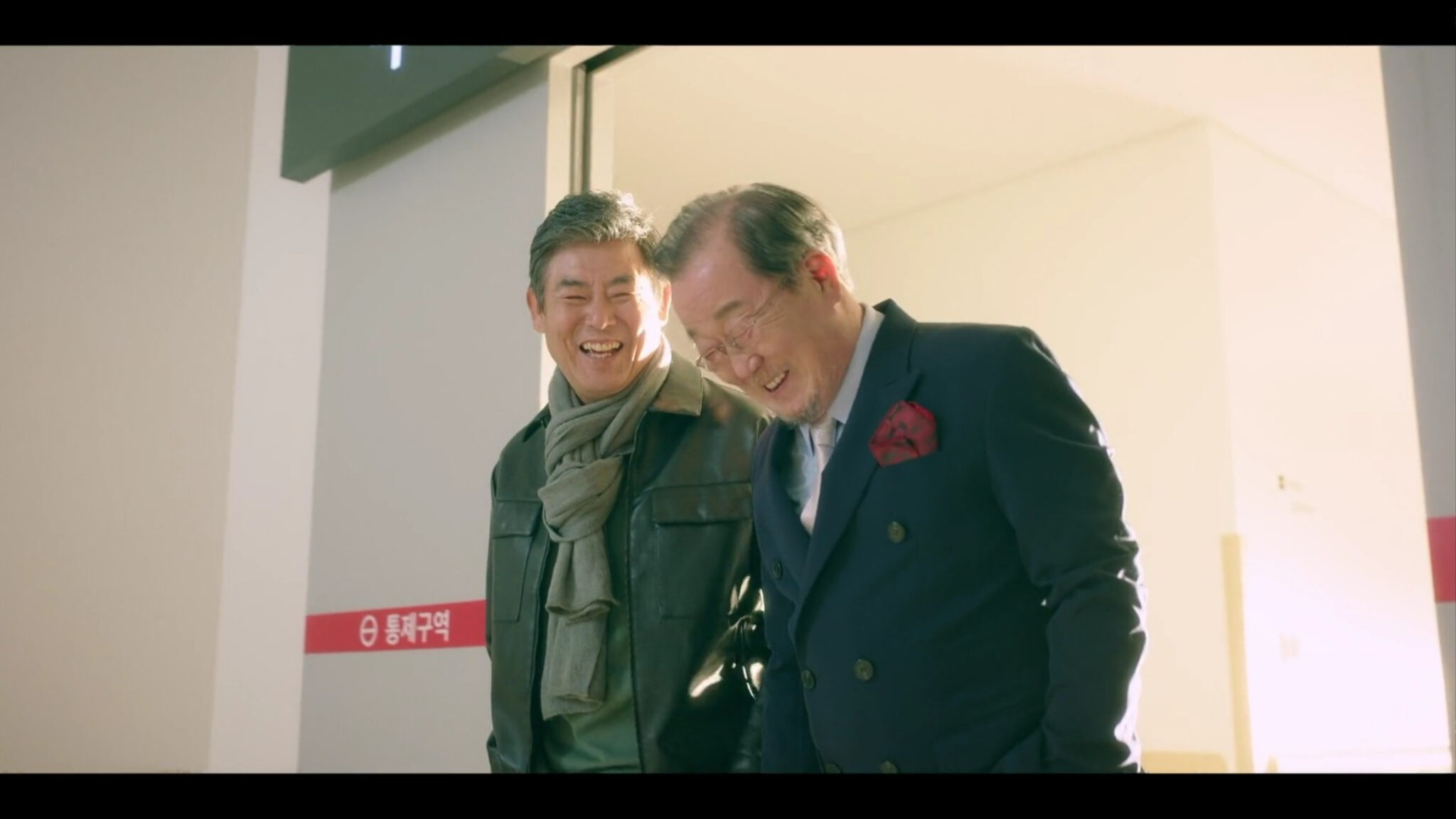 Rain and KB are so clearly the OTP.

The scene of the Chairman's death really was well done. Without saying much and mostly just laughing he and Sung Dong-il conveyed so much.

Other than that I'm always here for the bickering bromance. Especially since one of the FLs may as well not be in the show - I think she had less than 5 minutes of screen time across both episodes together 💀.

It really reminded me of "When you're born, you're crying and everybody's laughing. When you die, it's the other way around."

Such a beautiful scene.

We're officially in bromance territory now :) Seung-tak will be doing squats by the end of the drama.

The Chairman's death was poignant.

death, for some, is freeing

I'll just take your word on that, thank you very much :)

As for doing squats -- knee problems showed up here a few years ago so the back and shoulder problems wouldn't feel lonely, so I'm firmly with Seung-tak on that one. I don't like even watching...