[Staff Spotlight] Get to know solstices 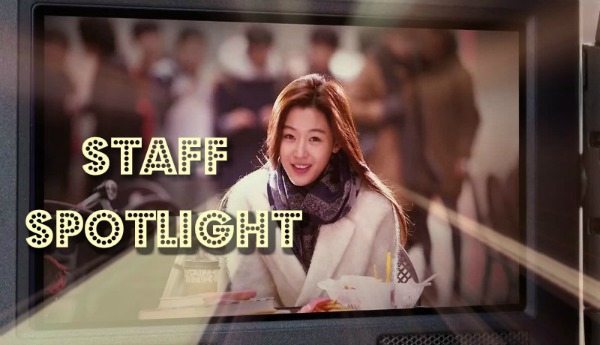 Explain your username (and/or avatar).
I’ve always been drawn to the sun, the stars, and the galaxy beyond, so I wanted to reflect that in my username. My avatar combines two things I love: the sunrise and Kang Seung-sik (of VICTON). He’s my favorite singer, and he’s sung several K-drama OSTs too! You might have heard him in My Unfamiliar Family or Find Me in Your Memory, just to name a few.

Have you ever lived a moment that you thought belonged in a drama?
Before my boyfriend and I got together, there was so much mutual pining and skirting around each other that our friends ended up placing bets on when we would finally become a couple. It wasn’t even a question of if, but when! They said we were meant to be, and they were right — long-distance can get hard sometimes, but we’ve been happily in love for the past year and a half. So I guess I’m living my K-drama moment right now!

What’s your favorite drama you recapped?
Through the Darkness! *squee* I could gush about this drama for ages. 10/10 would recommend! It has all of my favorite things in one show — the crime genre, an enthralling plot, captivating execution, and of course, Kim Nam-gil. He was the first actor I became a fan of, after watching him in Queen Seon-deok, so I’m super happy to be able to cover a drama of his. No sageuk character has ever topped my love for Bi-dam, heh.

What drama genres do you especially like?
I enjoy mystery and crime dramas the most, such as Children of Nobody, Signal, Forest of Secrets, Solomon’s Perjury, and 365: Repeat The Year. I also enjoy understated and contemplative slice-of-life, like Age of Youth, School 2013, and Move To Heaven. My taste runs a little more diverse for sageuks, from Six Flying Dragons to The King’s Affection. I love dramas that have a well-woven plot, compelling character development, and emotionally resonant relationships.

What drama genres do you especially dislike?
Being the scaredy cat that I am, you’ll never catch me watching anything horror or supernatural. (The Guest was an exception though — I guess my love for Kim Jae-wook won out!) I’m also way too squeamish to watch medical dramas. Oddly enough, I’m fine with gore in crime or thriller dramas. And I love Kingdom!

Is there a drama character you’ve ever strongly identified with, and why?
The character that immediately comes to mind is Eun-hee from My Unfamiliar Family. She loves deeply and fiercely, and her strength lies in her empathy. She cares for others above herself, and she does her best to keep the peace and avoid conflict. Her emotions might get the better of her sometimes, but she’s able to put down her pride when it comes to the people who matter. I see a lot of myself in her, and I admire the way she unabashedly wears her heart on her sleeve. She has her flaws, but she embraces them; her journey towards valuing herself and building up her self-worth really struck a chord with me. I relate to a lot of her struggles, and I aspire to achieve the growth that she has.

What drama character would you want to be?
My first instinct was to say any participant in Liar Game, because as a huge fan of The Genius, I’d love to try my hand at challenging similar games and outwitting fellow competitors. But after giving the question a bit more thought, I think I’d pick Hye-sung from I Hear Your Voice. She’s smart, tenacious, and strikes a good balance of confidently competent and tenderly compassionate. Though I definitely wouldn’t enjoy having to evade a murderer that’s hot on my heels…

What’s a random skill you have?
Somehow, I almost always end up picking the best dialogue options in visual novels and RPGs. It’s not the most useful skill, but it’s definitely a very satisfying one!

What was your major in school?
I’m currently majoring in communications!

Favorite non-Korean movie and/or TV show?
I don’t know if this counts, since it’s a musical, but Wicked! It’s one of my favorite books too. I also love Studio Ghibli movies, the anime Bungou Stray Dogs, and the donghua Heaven Official’s Blessing (also known as Tian Guan Ci Fu; the web novel it’s adapted from is a masterpiece).

Which Hallyu celebrity would you actually want to meet and spend an hour with?
Ooh, definitely Cha Hak-yeon! I’ve been a fan of VIXX for nearly a decade, and I’m still in awe at his growth and improvement as an actor. Also, he’s so kind and sensitive, and his Today’s Record vlogs have brought me a lot of comfort. I’d love to hear his thoughts on his craft, as well as his wisdom with regards to life.

Which of the 7 deadly sins would be your undoing? (Pride, greed, lust, envy, gluttony, wrath, or sloth.)
Sloth, for sure! You know those balance game questions that are like, wake up for breakfast or sleep in? Definitely sleeping in for me. I’m a major homebody, and my bed is my favorite place to be.

Your favorite drama has an unholy alliance with your most hated drama and produces a mutant baby drama. Describe the plot.
In despair over their parents’ impending divorce and how it’s tearing their entire family apart, three siblings invent a teleporter to return to a more blissful past. Unfortunately, their father mistakenly stumbles into the machine, and it transplants his 22-year-old self into his current body instead. Our heroine, the middle sibling, is devastated. Unable to watch her anguish any longer, her stalwart best friend (who secretly loves her) travels back in time to change the siblings’ minds before they can devise their invention. They’re briefly joined by a soft-spoken barista, who wins the lottery thanks to our hero’s tip-off yet ends up being conned out of the money by an awful ex-lover. Our leads battle against time paradoxes, unrealistic science, and bad CGI. Just when you think they might succeed, our hero begins disappearing as a consequence of time-traveling. Instead of actually solving the problem, our heroine takes a gun to her head, but the hole it creates is still smaller than all of the plot holes in this show.

My Unfamiliar Family was really good! Eun-Hee was a great character and her relationships with her parents, sister and best friend/lover were touching.

I loved the same dramas as you. Children of Nobody was sadly underrated.

Thank you! I agree, the drama portrayed the nuances of the different relationships really well.

Same, I understand Children of Nobody isn't everyone's cup of tea, but I wish it received more love! It's so gooooood. (And it was so nice to see Lee Yi-kyung in a lead role, and a serious one at that!)

Bi-dam in Queen Seon-deok! The only character, that I can recall, that brought a whole new level of intense interest to a show upon appearing for the first time at episode 23 or 25. Years later we still remember him.

Thanks for sharing some details about yourself with us!

Right? He really set the bar wayyyy up high for memorable characters.🤣

Ah a fellow TGCF fan! Nice to meet you @solstices!

Yay, more TGCF love! Nice to meet you too☺

Nice to meet you!

HAHA, oops! Maybe one day someone will produce a sageuk webdrama... :p

Nice to meet you too!☺

Welcome Solstice.
I'm glad you gave enough mentions to My Unfamiliar Family. Eun-hee was a gem, a mama bear to her family. Queen Seondeok really gave us some well fleshed out characters that stuck.

Thank you!☺ Those two shows and their characters will always have a special place in my heart.

I'm taking notes of...Children of Nobody, Solomon’s Perjury, and 365: Repeat The Year! Mystery is my genre!

Yay, a fellow mystery fan! Those shows are very high on my favorites list, so I hope you enjoy them as much as I did☺

Hi @solstices, thank you for being here and for your once and future recaps. Major thumbs up for the Bidam- and living in bed-love 👍🏼👍🏼👍🏼

That episode of Dong-Yi was really good :)

It really was! And the king's incredulous expressions were the icing on the cake. :D

10 la wants to feel liberated too

We almost have same taste of dramas except i don't watch sageuk dramas
Nice to meet you @solstices!👋

Ooh! Honestly, sageuks can be quite hit or miss for me, so I get you. Nice to meet you too!☺

I really want to know your most hated drama?
I am guessing favourite is my unfamiliar family, so hated.... Alice?

Haha, it's Sisyphus: The Myth! I think I have such strong feelings towards it because my expectations were high from the beginning — I mean, when you have Jo Seung-woo as the lead, it's hard not to have high hopes :") And it makes me extra annoyed that the drama actually had potential, but ended up squandering it away!

Eun-hee was a character that we all loved in MY UNFAMILIAR FAMILY, which is a great drama.

When Bidam died in front of Deok Man (sigh), that was the first time I became angry with a scriptwriter, you know, that kind of angry with some frustrating tears running down your cheek. It took like a week before I could forget the pain.