Our clinic director’s family drama impacts her life more than she bargained for and leaves her reeling. Meanwhile, our patient begins preparing for the end as her condition worsens. As always, our trio has a lot on their plates, but they’ve got each other’s backs. Even if that means ending up at the police station… again. This week opens with a sweet flashback to when Mi-jo’s family got to know her at the orphanage, and I love that it was Mi-hyun who led the charge. She consistently reached out and was the one to ask Mi-jo to live with their family. I’ve enjoyed their relationship from the start – their bickering yet obvious affection for each other; they don’t just love each other but actually like each other, too.

Then, we drop back into the present with Mi-jo visiting her biological mother in prison. It’s an awkward affair, at least for Mi-jo. Kyung-sook, on the other hand, has this flippant attitude and acts like they’re friends who haven’t met in a while.

It throws Mi-jo off and understandably upsets her, especially when all her so-called mother can do is comment on her double eyelids and coo over the fact that she can say her daughter is a successful doctor. You can practically see the dollar won signs in her eyes. Kyung-sook really is the worst because after Mi-jo leaves, she immediately calls someone to find out where she works. Not long after, a creditor shows up at the clinic to see Mi-jo who tries to brush it off (and won’t tell Sun-woo or Mi-hyun who he is), but she’s obviously shaken.

After their initial prison visit, Mi-jo chickens out of telling her family. But Joo-hee tells her mom that they went and worries that her mom suffered while keeping the secret for so long. Her mom is more concerned about Joo-hee and gives her the 50k she’s saved over the years so Joo-hee doesn’t need to worry about a job.

Joo-hee considers opening a shop and runs into Hyun-joon at the real estate office. (He’s looking for a place closer to his restaurant.) When he agrees to start calling her noona, Joo-hee can’t hide her giddy grin. But then she amusingly ditches him to go have coffee with Mi-jo and Chan-young when they text. 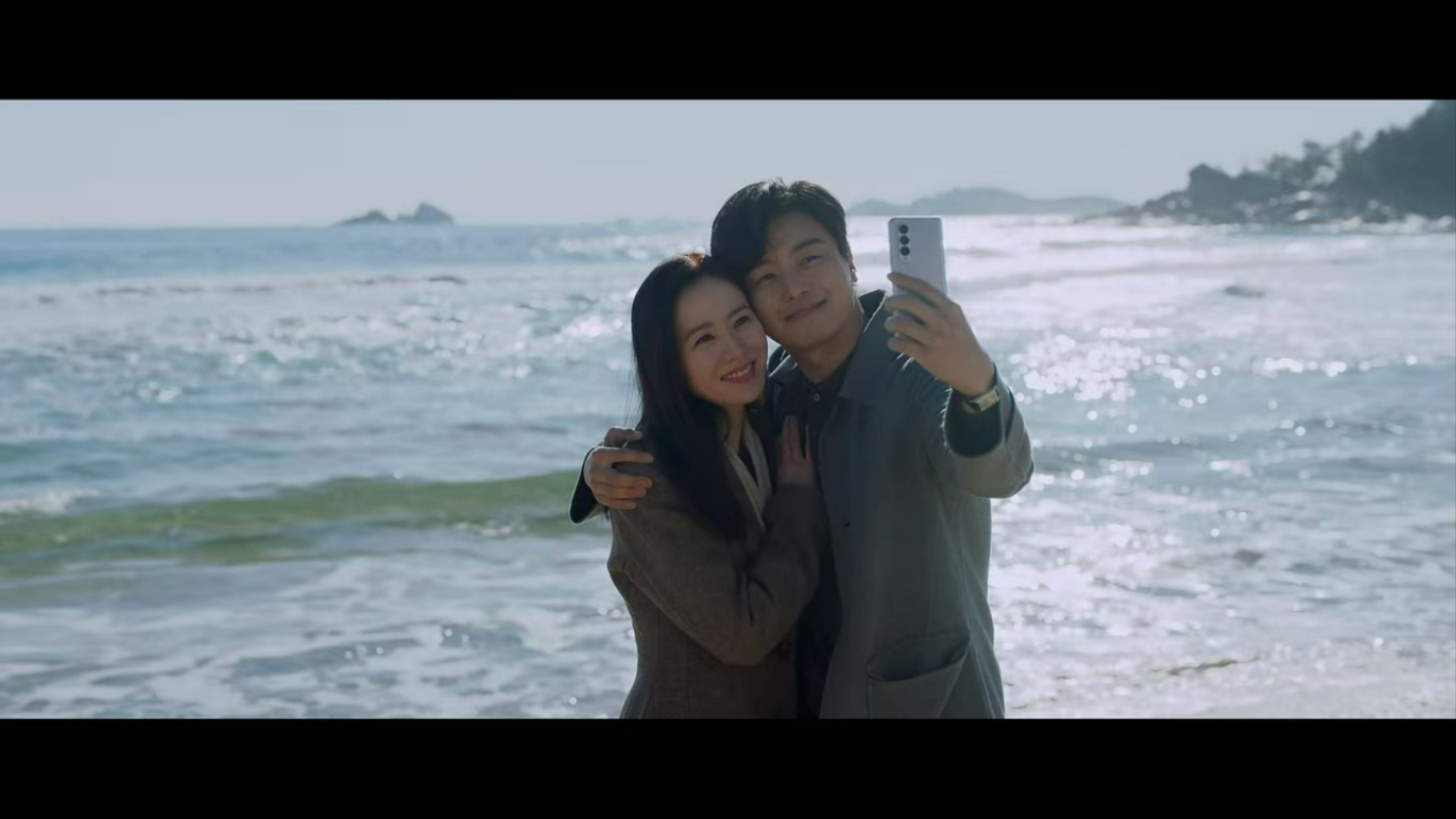 Naturally, when Sun-woo hears from his father what he did, he’s angry and ashamed. He takes Mi-jo on the obligatory couple beach trip and goes all out. He even rents out a restaurant before presenting her with a ring box as Rachmaninoff plays.

I thought he was officially proposing for a second, but he actually just bought some (expensive) couple rings for them. He apologizes for his father’s behavior, and Mi-jo admits it upset her but assures him it’s not his fault. Afterwards, wearing their rings, they’re giggly like teens with a crush. Meanwhile, Sun-joo seems to have decided to be a decent human being after learning about Chan-young’s cancer. Her about-face is a little hard to believe, but at least she’s not so angry all the time now. She even has a calm, heart-to-heart with Chan-young about Jin-seok and how he’s always been Chan-young’s.

Sun-joo even asks for Chan-young’s help convincing Jin-seok to let her raise Joon-won because she’s suddenly decided to be a better mom. Bizarrely, Chan-young agrees and helps talk Jin-seok into letting Sun-joo immigrate to England with Joon-won. I don’t get how a sudden change of heart overrides years of poor parenting and makes her a fit mother, but okay. Speaking of mothers, Chan-young is determined to make her mom’s birthday special since it’s likely the last one she’ll be around for. She orders a special cake and goes to buy her mom a pair of shoes. While she’s shopping, she gets intense pain and passes out.

Chan-young wakes in the hospital, but the only thing on her mind is that the cake shop is now closed. She runs over and sits outside the locked door with Mi-jo and Joo-hee, staring at the cake through the glass. Chan-young is so devastated that Mi-jo decides to take drastic action… and picks up a brick.

The others follow and shock themselves when they actually throw the bricks through the glass. While Chan-young runs to take the sort-of stolen cake to her mom, Mi-jo and Joo-hee head to the police station to turn themselves in for destruction of property. 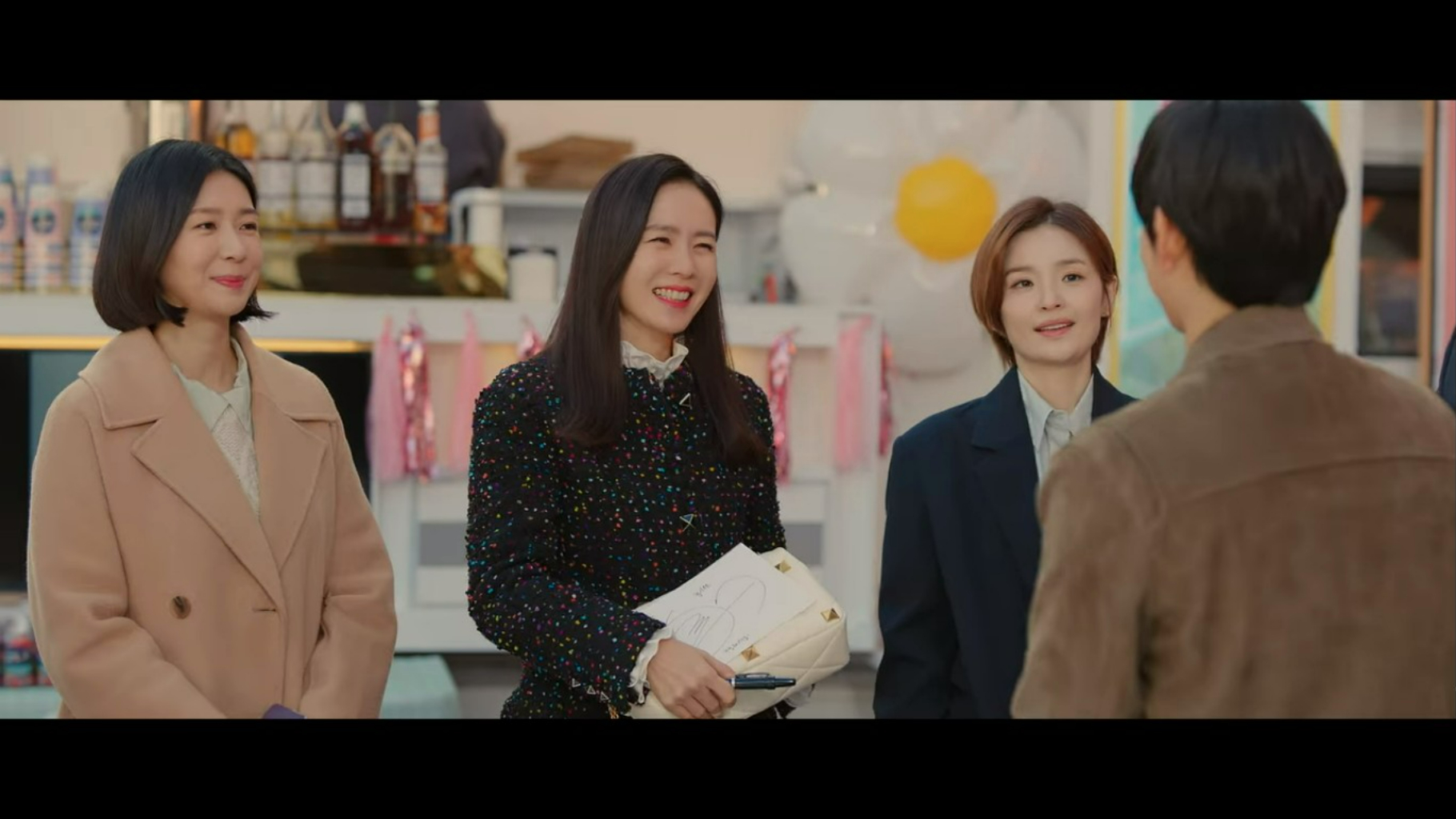 They hilariously trot out the cancer story, earning the sympathy (and tears) of the shop owner and officers. All seems well, until the owner posts the video footage with their touching story online and it goes viral. Our leading ladies aren’t happy, but Hyun-joon and Sun-woo get a kick out of it.

Chan-young doesn’t have too much time to fret over it, however, since it’s time for her to start shooting her new film. We get a fun cameo from Im Shi-wan who turns out to be the male lead. Mi-jo and Joo-hee embarrass her when they show up at the shoot and fangirl over him.

With her friends starting to get themselves together and her acting dream being fulfilled, Chan-young is feeling more at peace with her inevitable passing. She starts to handle her affairs, even going to the columbarium with Jin-seok to reserve a spot for her ashes so that her parents don’t have to do it. Elsewhere, Mi-jo and Sun-woo make a trip to the orphanage to catch up with So-won and the kids. Mi-jo talks to So-won about her decision to quit piano after being trained at Julliard, and correctly surmises it’s because the assemblyman paid for her tuition. Mi-jo encourages her to think of her talent as a gift from her birth parents and not to give up.

As usual, once Mi-jo has had some time to process, she ends up telling both Sun-woo and her mom about her birth mother and the creditor she sent. Mi-jo’s mom comes clean that she’s always known about Kyung-sook and that they’ve given her money multiple times. Mi-jo is embarrassed, but her loving mom reassures her that none of this is her fault. 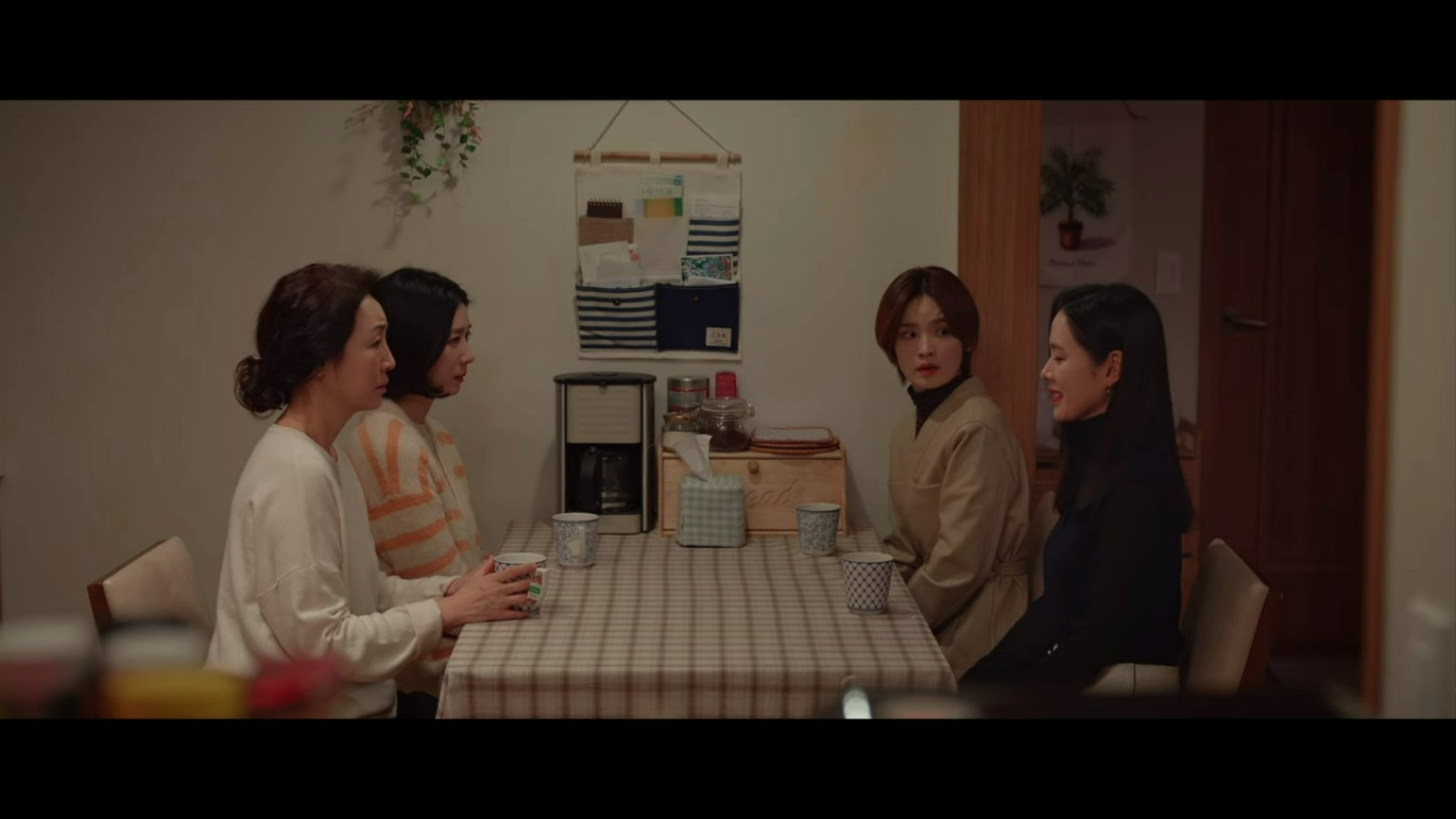 Mi-hyun also learns about Mi-jo’s mom after scaring it out of Chan-young and Joo-hee, although none of them know about the creditor. Joo-hee does approach Mi-jo about the mystery man, but she bristles when Mi-jo brushes it off.

Joo-hee shocks Mi-jo by angrily asserting that she’s always the third wheel. She knows Chan-young and Mi-jo talk about everything and always tell her last. Joo-hee cries, insisting she can handle the burden too. When she says she’s afraid not only of losing Chan-young but of her relationship with Mi-jo changing once Chan-young is gone, Mi-jo looks like the air is knocked out of her.

Knowing Joo-hee is worried that Mi-jo blames her mom for lying, Mi-jo goes over with Chan-young for a talk with Joo-hee’s mom. Mi-jo tells them all about the creditor and thanks Joo-hee’s mom for keeping this painful secret for so long to protect them.

We end this week’s episodes with Mi-jo confidently striding back into the prison, determined to handle this situation with Kyung-sook. I’m glad she told everyone around her the truth and isn’t trying to fix this entirely on her own. Let’s hope she can put a stop to Kyung-sook’s nonsense.

Mi-jo finally seems to be facing her insecurities and dealing with her emotions, Joo-hee is expressing herself more – it would appear Chan-young’s mission is succeeding. We’ve only got one more week to go, and I’m guessing it’s going to be rough. Prepare your tissues. CY as the problem solver in itself problematic. Her pushing JS away to reconcile with his wife then letting him barge into her final days is an emotional volcano ready to erupt. She should be spending her time with her parents and not consoling a man who cannot handle his own guilty conscious.

I am glad JH spoke up about her being the third wheel in the friendship. Her observations and opinions would be refreshing but they are bulldozed by the emphasis on Mi Jo’s endless array of personal problems.

Birth Mom gave up her rights so MJ has no legal or moral obligation to do anything for her. But the writer wants to keep throwing trope gasoline so SYJ can emote like a deer caught in the headlights. This story arc is immaterial and irrelevant.

MJ’s love story is stale and unnervingly boring. I find no chemistry. MJ not confiding her Bad Mom issue with SU is a huge relationship red flag. How long can someone take her emotional swings? The beach proposal was dull PPL.

The only strong friend memories are police capers which is really sad. The series to date is just sad: a sad waste of acting talent and opportunity to really address real issues of Korean women turning 40.

I'm giving up even fast forwarding this one. I'll continue to wait for a drama that addresses the issues of Korean women turning 40.

Me too. with only 2 more episodes I wanted to finish it. But I don't think I can do it.

@ndlessjoie: it has been such a disappointing viewing. The show runners must have worked really hard to produce such a dud as it shouldn’t be easy to have so many good actors coming across as cardboard cutouts of real human beings.

I'll read the final recap. Once I found out it was a total melo, I should've known to bow out since it's usually not my thing.

Man. This drama. They should have called it The Son Ye-jin Show, because that's exactly what it seems like. Or, rather, the Trials of Mi-jo or something. Yeesh.

I liked the friendship scenes we got this week but Mi-jo's biological mother plot is utterly unnecessary. Chan-young is dying and yet everyone is comforting Mi-jo. It's ridiculous but in this drama everything revolves around Mi-jo.

I thought it was a copout to make Sun-joo a bad mom who lied about her son's paternity and it was another copout to send her and the kid to England after she suddenly decided to let Jin-seok go and be a good mom. Ugh, this drama is so disappointing but there is just enough good there to keep me watching.

It's all about Mi-Ju now and I struggled to finish these episodes, her misery is overwhelming, and meanwhile the friend is dying and we have only had the most glancing references to her declining health. Sorry, going to have to give the last two a miss.

When Mi-jo met with Seon-u's father and she acted all sorry and pathetic (as if being adopted is actually something she should be ashamed of) instead of being strong and outraged about this idiot, I was screaming at my monitor in anger. I hate that shows like this actually reinforce a lot of the worst parts of Korean culture.

I am frankly surprised at all the negative comments about this drama. I think it is a lovely story of friendship, love, life and death. Mi-Jo is the narrator.....don't you know that a narrator gives the story from their point of view? You all think it's an egotistical thing, when it is a narrator's view. I think it is a real gem of a drama....beautifully written and beautifully acted.