May It Please the Court

An ace attorney is forced to work as a public defender for a year, and her new colleague has a completely different outlook on life and law. Despite fighting like cats and dogs they must work together on a serial murder case and learn to trust each other.

An ace attorney is forced to work as a public defender for a year, and her new colleague has a completely different outlook on life and law. Despite fighting like cats and dogs they must work together on a serial murder case and learn to trust each other.

May It Please the Court: Episodes 5-6 (Drama Hangout) 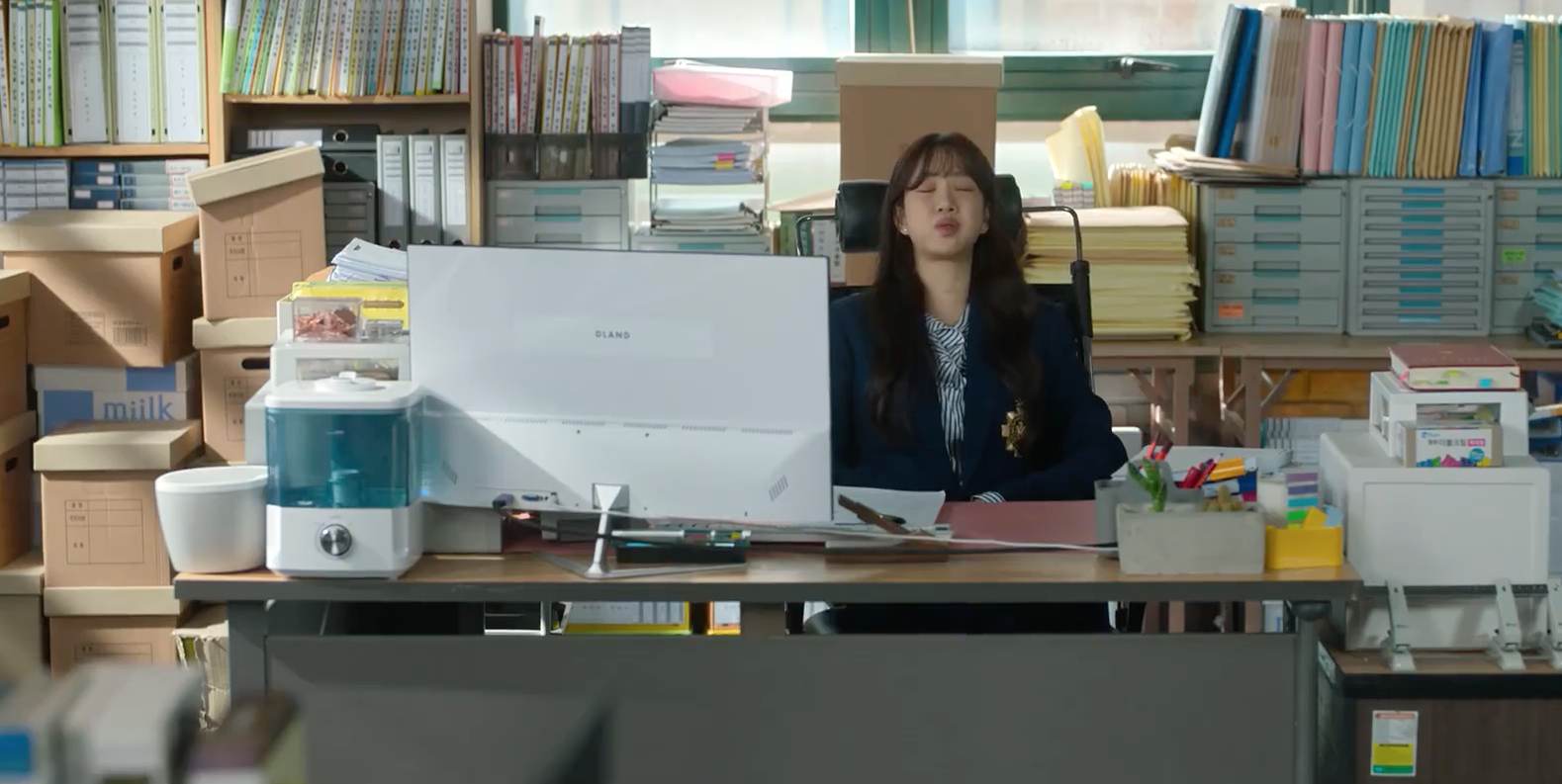 Grandfather, Chak-hee, Si-baek, Young-soo and the chain letter left me in stitches.

With episode 6, the criminal case became really exciting. There is clearly more to it than the first episodes led us to believe.

Watching eps 5 and 6 kept me thinking that this drama should feel more exciting and intriguing, what with its one huge case encompassing all the smaller cases throughout the drama and all seemingly disparate stories coming together to paint an unusual picture. But all I could feel was how tired, overdone, and unnecessarily dramatic everything was. Maybe it's the heavy-handed directing. Maybe it's the cliche plot and characters.

All I know is that the only thing that made me perk up was when the drama focused on Chak-hee's growth as a lawyer and human being, and whenever our two leads started to bicker about anything and everything. Not too promising, but thankfully it's only 12 eps long and there's Lee Kyu-hyung as my personal added motivation to finish this.

I was annoyed with these two episodes because they kept adding new cases without concluding the existing cases in an episodic format. I suspected that they will be tied to the murder mystery and I was right, but I wanted them to be separate from the big picture because it was fun to watch Chak Hee mention one thing and end up doing completely different thing after learning the story behind each case. It is good that we are at the halfway mark, so I can power through the remaining episodes by riding on the rapport between the leads.

Yes, the chain letter was funny and it was lovely to see the relationship Chakee had with her grandfather. I found the addition of GiDos daughter tiresome though. There are enough characters being added/murdered on a weekly basis to keep track of them all.
Also, are we convinced Si Baek is the killer? The chef and his amnesiac part timer are highly questionable too.

Did the mom recognize Chak-hee. The way she pointedly looked at her before naming the law firm, could she have recognized her? That raw weakness Chak-hee experienced when she realize what havoc she might have caused, the execution had it on point. Her acting, the visuals, even the music theme playing underground brought it all into a perfect mix.

Bait and switch all MIPTC likes, I'm not suspecting Shi-baek. My radar is currently on Dal-jae, the memory loss guy whose story is tragic already without having the full details, and the chef, who spoke from experience and from a first person perspective. One of them is definitely Lee Dong-pil.

I'm happy this is a 12 episode drama so we won't be having unnecessary fillers, but this is one I wish gets just one episode addition.

And I lurve her relationship with Haraboji Jang. So raw, pure and beautiful.

The chain letters😂😂🤭🤭. Whatever those letters contained, I want to read it and suffer the embarrassment they suffered.

Personally, I choose to believe that it was one (or the?) reason why the daughter didn't answer Chak-hee's phone calls.

I liked practically everything about the two new episodes except for the fact that there wasn't enough screen time with just our two leads together. Favorite piece of dialogue: Schroedinger's shih tzu. Favorite new side character: Yoo Kyung-jin. Favorite moment(s): Shi-baek coughing and doing the manly voice at the beginning, Chak-hee happily slapping Shi-baek's ass (?) in the drunken flashback, Mr. Do suffering the Chak-hee/Shi-baek duo, Chak-hee's interrogation, Shi-baek and the hair tie.

I liked my water pollution idea but, apparently, it's dead wrong. My next wild guess is that the "drowning" was some kind of hazing ritual of a society for whom the watch signals membership. One more guess: Shi-baek's dead parents aren't linked to his investigation. I mainly want this to be true because anything else would strike me as way too predictable. Further food for thought: What would be a better incentive to do right by the poor than coming from an unscrupulously privileged household? Such background for him would also provide an interesting contrast to Chak-hee.

- How did Chak-hee manage to get confidential Jangsan client information when all her former colleagues seemed to dislike her?

- What the hell happened (or was supposed to happen) to/with that little boy? The director knew that Chak-hee would have an eye on him and his sister. Why would he choose him of all the kids? Or was the killer already involved at this point? (Let's not forget: The children's father was also an orphan. Maybe even at this orphanage? I wouldn't completely rule him out as the killer. Though, to be fair, the killer seems to possess specific insights about the victims that an ordinary father of two simply wouldn't have without a prior motive.)

I hope we'll learn what really happened on that one drunken evening within the next two episodes. Did Chak-hee discover something about Shi-baek that he didn't intend to reveal to her?

Re: Chak-hee using sign language.
I had assumed that she had been studying it on the side — partly due to wanting to communicate with her client, and partly refusing to be one-upped by Shi-baek. (lol)

Honestly, if Shi-baek competitiveness was one of the reasons, I would have loved to see that directly acknowledged on screen. Even if it wasn't, just seeing Shi-baek's reaction to her emulating him when it comes to the accommodation of underprivileged clients, would make me immensely happy.

YES! I would have loved to see that too. Maybe we'll get lucky and there will be a deleted scene that is released later that shows something like this.

Re sign language, I thought she had just learned the basics, such as 'thank you' as the woman's son was still translating for her.

You are right. Upon rewatching, Chak-hee said way less in sign language than I thought she did when writing my comment.

Is it just me or is it starting to feel like the serial killer is going after child predators?

The part that kinda shook me with this week's episodes is the grandfather's conversion with Gi-do. So far, the patriarch has managed to come across as this kindly old man who has a soft spot for Chak-hee, but that little chat with Gi-do (where the grandfather says something like, things don't disappear even if they're hidden) reminded me that Jangsan is probably the cutthroat firm that it is because of the way the grandfather built the firm. It makes me wonder if he's all warm and fuzzy with Chak-hee because he did some irreparable harm to her family.

I did wonder if the guy with the memory loss is the killer, but he seems more like a victim after this week. So yes, the chef seems more likely to be a suspect.

Overall, I'm still intrigued and still want to see where this goes. And agree with many commenters that the interaction between the two leads is the best part of this series.

While he is warm and cozy with Chak-hee, there's something Chak-hee's grandmother told her some time back before she passed away. That she must find a way to possess 1. grandma's shares of Jangsan firm, 2. Get her hands of Jangsan's shares. That it's Chak-hee's natural right.
Remember Grandpa was willing to surrender his shareholding to Chak-hee went upper management in the form of Haran, Cho and Yoon were refusing to name her partner. Something must have spurned that statement, something that says Chak-hee's grandma is an integral part of Jangsan but was pushed out and relegated to an outsider of Jangsan firm.

Yes, I vaguely remember one of the people in Gi-do's family referring to Chak-hee as the daughter (or granddaughter) of their housekeeper.

I do wonder why Gi-do and Haran's daughter wants Chak-hee dead (I am assuming Chak-hee is the person the daughter wants killed when she's speaking to Haran). Such a messy and tangled web. Can't wait for all the pieces to be revealed.

Get her killed for supplanting her position as Haraboji's grandchild and favorite? What exactly did she do to preserve her supposed position. Point blank she's a rebellious daughter. And Chak-hee at least did things that secured her place on Haraboji Jang's side. A grand show of misplaced sense of entitlement? I do hope she gets her insecurities in check and work out her issues.

The Jang family and affiliates are not okay at all. They're a bunch of sickos.

Oh, and your mention of Chak-hee's grandmother made me go back to Episode 2 — and yes, to your point, she had promised her grandmother that she would get Jangsan's shares.

I was also reminded of the grave that Shi-baek also visits. The name is Eun Hee-soo. Could she have been one of Shi-baek's former clients who was wronged by Jangsan and their cronies?

And I'm still eager to find out why the dumpling chef makes dumplings the way Chak-hee's grandmother makes them.

It's not just you. I definitely felt the child abuse angle in these last four episodes. Victim #1 and the police chief, however, seem to have preyed primarily on women/female subordinates, so I assume that all the victims are abusers with different sets of targets.

The one thing I'm wondering: If the orphanage director was a lifelong child abuser, wouldn't Chak-hee know something about it? She stated that she didn't like him but if he was indeed a criminal to her knowledge, she'd never left the children in his care. Further: Why would he target that little boy who was only shortly at the orphanage (not enough time to groom) and who definitely had Chak-hee to look out for him? Doesn't make sense.

I think that Grandpa is exactly as dirty as the others. He's already secured his place at the top, so right now, he doesn't have a reason to be outright cutthroat. Let's wait until the tables are turned and he has good reason to question Chak-hee's loyalty when it comes to Shi-baek having to take a fall for the murders.

I really love this show and the leads. I for one don't mind legal dramas and there are lots of fun things going on with Jung Ryeo-won in the drivers seat.