Court ladies or gungnyeo (궁녀,宮女) were the working women inside the palace. The word gungnyeo literally means ‘palace women’ and it was derived from the term gungjung yeogwan (궁중 여관) which gives the literal meaning ‘lady officer of the royal court’. Gungnyeo was used to generally describe all types of women who were working inside the palace, serving the royalties living in the royal quarters. Gungnyeo consisted of the high ranking court ladies as well as the ordinary court ladies without any rank who did most of the labour work known as nain (나인) and the other types of working ladies who were not included in the ranks such as bija (비자), musuri (무수리), gaksimi (각심이), bangja (방자), and uinyeo (의녀).

Generally, the court ladies were chosen among the young girls of the commoners or sangmin and the private female slaves of the governing class or sadaebu. However, the commoners were against this practice of sending their daughters to work in the palace at an early age and chose to marry off the daughters at a very young age to avoid being picked as the court ladies. Hence, the candidates for the court ladies were later picked among the private slaves as well as the government slaves, together with the daughters of the aristocrats’ concubines who were once courtesans or slaves. The appointment process was different for court ladies associated with the inner quarters for the king and queen since they were closely working with the royalties and for this reason, the nain for the inner quarters were recruited by the high ranked court ladies themselves through recommendations and connections.

The nain for the departments with specific skills such as sewing and embroidery were from the middle class or jungin while the ordinary nain were mostly commoners. The lower class gungnyeo came from the cheonmin class or the vulgar commoners. The age of the trainee court ladies were in between 4 to 6 years old when they first entered the palace but there were some trainees who entered when they were older, with the maximum age was 13 years old. These young trainees, who were also called saenggaksi (생각시), received proper education to become a gungnyeo, for instance education on the court language and palace etiquette. They would be elevated from the saenggaksi level to a nain when they passed a coming of age ceremony and later, when they had served the court for more than 15 years, they would eventually be promoted to higher ranks, with the top rank that could be achieved by a court lady being sanggung.

The nain were divided into seven main departments inside the palace: jimil (지밀), chimbang (침방), subang (수방), sesugan (세수간), saenggwabang (생과방), sojubang (소주방), and sedapbang (세답방). Jimil nain were the closest servants who waited and served the king and the queen, plus protecting them from any harm. These ladies entered the palace as early as the age of four in order for them to be trained properly. Chimbang nain were the tailors or seamstresses who made royal clothes and accessories for the royal families while subang nain were the ladies responsible for embroidery, be it for the royal clothing or the palace decorations. Sesugan was the department attending the king and queen’s bath, cleaning, and other necessities such as toilets and the place to spit. Saenggwabang was where preparation of the desserts and snacks took place, including fresh fruits, cooked fruits, baked goods, tea, fruit punches and porridge. Sojubang nain were further divided into two smaller departments: inner sojubang or naesojubang for daily meal preparations and outer sojubang or oesojubang for preparing food for banquets with the help of daeryeong suksu, a special chef for banquets from outside the palace.

Three other departments for the nain were twiseongan (퇴선간), bogicheo (복이처), and deungchokbang (등촉방). Twiseongan nain specialized in food arrangement while bochigeo was the department responsible for making fires and maintaining the heat for the quarters. Deungchokbang was for lighting candles and lanterns in the palace. The court ladies working as jimil nain were more influential compared to other nain and chimbang nain, together with subang nain, were the next in line in terms of power.
https://thetalkingcupboard.com/2014/06/15/women-of-the-joseon-dynasty-part-1/ 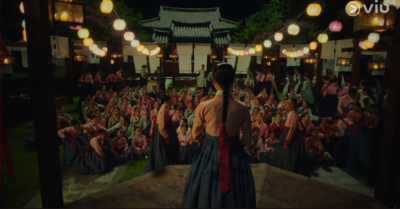 So what kind are the kind that follow around the royals? Or is it a mix and they all have different jobs, hence the number?

I don’t know, but we are going to figure it out. 😊

I know Dong Yi was a musuri when she first started, but I can’t tell what specific rank Deok Im was or her current rank.

This is so informative and fascinating! I wanted to do some research of my own on court ladies and the history of that specific time period, but this saved my time lol. Your post explained everything in a way that was very accessible and easy to understand. Thank you.

There is more detail here @ladynightshade.