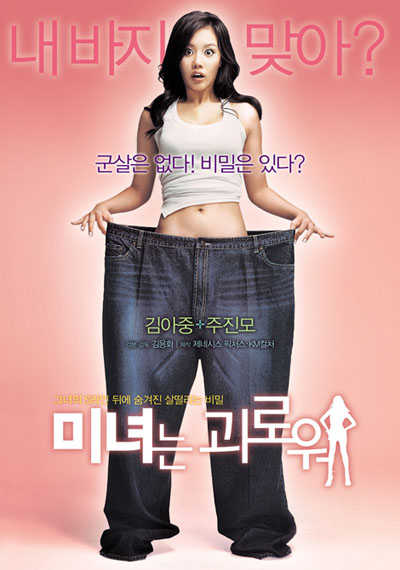 Sleeper romantic-comedy hit 200 Pound Beauty is preparing its sequel, because what’s more natural after a film unexpectedly hits big than to milk that cash cow for all it’s worth? Still, despite my problems with the way the film resolves, it was more entertaining than I’d expected, and the writing was a cut above your average Korean rom-com fluff-fest. So maybe there’s hope for a sequel yet, although first the producers will have to win over the breakout star of its original, Kim Ah Joong.

Kim Ah Joong has had CF contracts and lots of offers post-200 Pound Beauty, but hasn’t struck it big with a follow-up project, so her wariness is understandable. Her management states that “as the lead actress in the original, it’s natural for people to wonder over her role,” but her participation is by no means definite: “The production company is still in the process of making its sequel, and we’ve asked to see the screenplay when it’s completed.” He adds, “Because it’s not yet finished, we aren’t ready to discuss whether she wants or doesn’t want to appear in the film. After seeing the finished script, she will consider it.”

With both actor and director yet unsettled, the screenwriter is currently penning the script. The basic plot outline describes main character Hana, who’d beautified through massive plastic surgery in the first film, undergoing the “yo-yo effect” to regain weight in the sequel.

Hm, sounds an awful like the true life tales of actress-comedian Kim Mi Ryeo — who got slammed for “beautifying” via exercise and surgery (Botox and lipo), then for regaining weight — doesn’t it?

hmmm...i admit, i don't particularly like the premise of the movie (or the supposed sequel) but somehow it came off better than i expected...strange. :/

I'm not embarassed to say that I liked 200 lb Beauty. It was entertaining and fun and that's all I asked from this movie as I wasn't expecting any life changing insight or revelation.

I also feel sorry for Kim Mi Reo who was criticized for her weight changes. She doesn't even seem that fat to me. Kind of like a chunky Kim Sam Soon.

i guess i'm not the only one who secretly liked this movie :) KAJ was surprisingly funny in it..
what happened to kim mi ryeo? why did people have to bash on her for? >_<

I loved her singing of Maria.

I like 200 lb beauty.... If she sang Maria, then she has an awesome voice. My cuz CRIED when she watched it. I thought it was entertaining 7-8, maybe 8.5 including music and eye-candy. But I hated the ending...I mean, somehow I don't think the characters would've acted like that in the epilogue. Plus, it wasn't all that touching to me. Higher than fluff that's in market lately, definitely, but not thought-provoking either. What I would've given to see an entertaining but true look into plastic surgery craze and how the media looks at looks....ENTERTAINING, while evoking thought, mind you. But I guess the best thing I have for now is 200 lb beauty (I'm so not into melodramatic dramas, nor documentaries--unless the documentaries are the best) so I'll be catching the 2nd one. Would like to see the main actress return though.

I liked this movie..
I hope they're still going to keep the same actress, because don't you just hate it when they make a sequel and the casting are different and the plots are almost the same!
Just like Goong and Goong S.
I really liked the song MAria! I listened to it non-stop!
haha,

Hi,
I love your website, always something new to read all the time! Tks!
One problem I have is everytime I click to listen to the songs, it says error opening file? Can you help me solve this as I am a technophobe!
Rgds

good movie...but KAJ eyes are unusually round in the poster, don't you agree? Looks unreal...like lots of photoshopping.