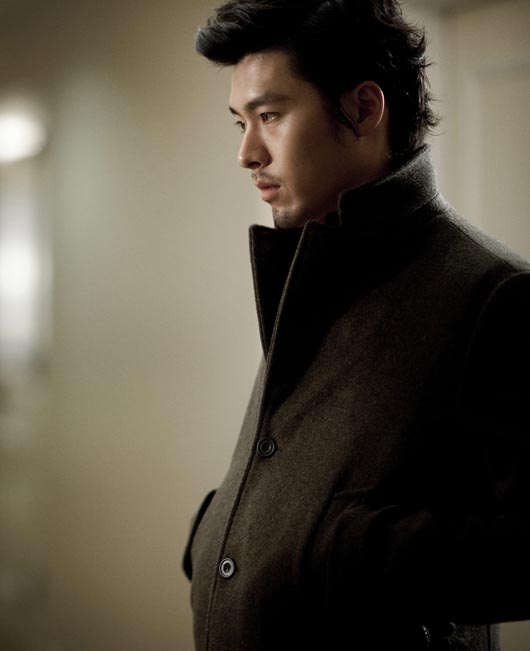 Hyun Bin will no longer be in Seattle, as filming has wrapped on Late Autumn, the remake of a ’60s classic that co-stars Tang Wei.

The film had begun shooting in the Seattle are on January 12 (where Hyun Bin’s girlfriend, Song Hye-gyo, reportedly visited him). The film wrapped with its epilogue March 1, which was shot on Whidbey Island, which is part of Puget Sound and located 30 miles from Seattle. Although Hyun Bin wasn’t featured in the last shoot, he stuck around while his co-star filmed her final scene, and the crew toasted the end of production with some champagne.

The 1960 film, now lost, is considered a masterpiece by director Lee Man-hee, and tells the story of a three-day love affair between a woman who is granted special leave from prison and a man on the run. The film is a co-production with an American company (hence the Stateside shoot) and is directed by Family Ties‘ Kim Tae-yong. The film is being planned for a release in the latter half of 2010.

I'm SO jealous of anyone that got to see him in Seattle.
Gosh. I moved two hours away for school and THEN he comes?!

Gah. Well. I'm really looking forward to this movie and I agree ^!
They both look similar.

Song hye Gyo and hyun bin together?
i didnt know that :)

she does look like tang wei in that picture, a bit waif-like.

hyun bin looks sexy in the photo, i'm interested to see how the film will turn out. hope it's good!

wow he looks so different!!

and a long story about the seattle angle:
http://seattletimes.nwsource.com/html/localnews/2011285408_koreanfilm08m.html

what the heeeeeeeeeeeeeeckk? i didnt know he's in seattle for that long! dang it! i live in the freaking seattle. city full of korean and taiwanese celebs. geez! and i never meet any of them. how lucky.

Poor Binnie...you need some good rest...looking forward to see this film when it comes out. Maybe I should see his last drama(Do I dare,@langdon813,since it was sooo gut wrenching??)

@me yeah gotta agree with u...i did a double take too!

Aww, I wish I had known earlier!! I would have driven there and stalked the shoot!!!

I like it how girlfriends fly across the world to rekindle an intimate relationship with their boyfriends. *makes me blush*

They were shooting across from my work and I didn't realize who it was until they were gone. *sniff*

Maybe it's because I just finished watching MNIKSS, but Tang Wei looks a lot like Jung Ryeo Won in that pic. Weird. Bin looks good though, can't wait for this movie.

He looks hot. Look at those cheekbones.
TW is just beautiful. What makes her stand out is she doesn't look generic.

The long, reflexive "uuhhhnnnnnnn" that escaped my mouth when I saw that photo of Hyun Bin "says" is all for me -- there aren't words to describe how gorgeous he is in that photo!

still looking good as ever.

but damn...did not know hyunbin and hye gyo were together.

Omg! i had to do a triple or even quadruple take at HB's pix, I honestly didnt know it was him. I actually thought that the pix was that of TangWei (sorry not familiar w/ her) and TW's pix was JRW.

As many have lamented, I too was in Seattle but didnt know about the shoot (just like I missed SIG being here in Hawaii till I read about it in javabeans blog, I thought the helicopter incident was a PiratesNdCarib4 mishap...oi vaye! talk about having all the "luck")

But yeah that was nice of SHK visiting HB.

yeah...in.what language will this film be?
hope it will be good

According to the website that Paula 253 provided (thanks!), the movie's going to be in English =]

I can't wait to hear HB's english. HB was the first k-actor I crushed on badly when I just started watching k-dramas. Ahhhh...the memories. ;-)

i'm with everyone who a) is kicking herself for not having run into Binnie -- w/o SHG of course -- while he was in the city, b) is drooling over the top photo -- he looks like a MAN here, and c) can't wait to hear Binnie's english.

consolation prize on a): it'll be fun to watch the film and spot the seattle scenes. and on c) we won't need subs... i think. ^^

i gotta thank Mr. paula253 for sending me that link -- even tho he doesn't know who Binnie is, he had a vague idea i would want to read the story keke

Yeah no kidding. She does look like Jung Ryeo Won.

the first pic, i needed to do a double take
i thought it looked like kim kang woo

the hair and the expression comes to mind

I thought that was Jung Ryeo-won for a second there. A healthier looking JRW. Imagine if JRW gains a little more weight, she looks so pretty.

hyun bin's english wasn't that great in MNIKSS. hope he had some language coaches. ah but he is beautiful to behold . . .

@me SERIOUSLY i thought it was jung ryeo won at first! i had to look like 5 times :D
and hyun bin's SOOOO CUTE :D

I"m sooo missing HYUN BIN!!! Wouldn't have missed him as much, if only I continued watching his last drama "Friend"...but it was too gloomy & violent for me!!! His fans are the sweetest & SHK is such a supportive GF!!!
Binnie looks sooo MANLY in that pic!!! hot!!!

I had to do a take-two on her. I thought she was Jung Ryu Won for a second there!

She DOES look like Jung rye Won. How ironic....I miss MNISKS :(

Loads excited for this! I can't wait to see Tang Wei on screen again. :D

What a refreshing combination!

I'm right there with you. I so miss seattle (went to UW) and it was there that I watched mnikss and fell in love with hyun bin. wow! the memories. it'll be bittersweet when i finally get to see this film.

oh i miss binnie oppa, just finish watched Friend, want to see, watch, hear about him more. never thought his relationship with SHK is going to be this well, i thought it was just a rumor for commercial purpose, ho, ho, ho. love SHK too, love how good they are together....

I saw Hyun Bin personally,,,,he checked in In our Hotel for how many Months,.... here in SEATTLE he is a Good looking Guy,,,yes I saw SOng Hye Kyo too PRETTY,,,

Hahaha, I can't believe that I read everybody's comments that they all thought Tang Wei DOES look LIKE as Jung Rye-Won for a second!

sweetsyn23 .... you really lucky to see them.. it means that what manager SHK said is not thrue about their meeting in Seatle. Yeah.. Hyun Bin look so cool, sexy and handsome. Nice to see that their dating is thrue.

Everything about Tang Wei

i am anissa at algerie $
i lake you movies at i love you styl
mu adresse email is : [email protected]

hiiiiiiiii hyun bin how are you

good god, i didn't know that Hyun Bin was here in Seattle. it is too late now. I'm from seattle and it is beautiful place to live and great landmark. it is going to be a good movie. Can't wait.