Butting heads with the boss in Radiant Office 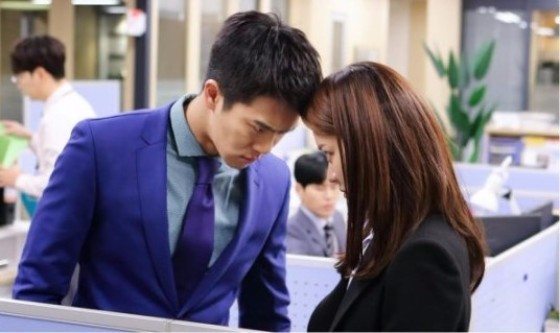 Workplace melo-comedy Radiant Office has released another teaser and a couple more stills to rev up for its premiere next week. According to the plot synopsis of MBC’s upcoming drama, a young woman played by Go Ah-sung (Heard It Through the Grapevine) attempts suicide because she can’t seem to catch a break in finding a salaried full-time job, but then is informed that she has a terminal illness just as she’s finally been accepted into a company.

I was wondering whether the whole jumping-into-the-Han-River scene would be a deeply melancholic moment which would set the tone of the show, placing it more firmly in the melo category than in comedy. But the newly released teaser reveals that the suicide attempt was more of a frustrated expression of hardship than a real desire to stop living, for which I’m grateful. Because now I don’t have to worry so much about the heroine’s mental state and can continue to enjoy the comic hijinks.

Just as they try to get on the bridge ledge, a group of rescuers and reporters show up, embarrassing them to the point where they just try to make a quick getaway. The three then meet again later as probationary employees for the new company they’ve been hired at. It’s actually Lee Dong-hwi’s ex-girlfriend’s workplace; he originally wanted to be the “Company Couple” with her so he tried out for the position, but now it’s super awkward because they’ve broken up and he’s been hired.

We get to see Ha Suk-jin (1% of Anything) as well in the teaser as their short-tempered supervisor. On several occasions, it looks like Go Ah-sung will get a bit of satisfaction facing off with her new boss because the stills show her head-butting him and patting him on the head. The music in the teaser stays upbeat while it shows her navigating her way at the company, from going on a car ride together to eating dinner with her co-workers.

I love that the drama brings eclectic sports into the mix as well from archery to fencing to comically illustrate the friction in the relationship dynamic between Go Ah-sung and Ha Suk-jin. The teaser ends with her firm determination to try really, really hard this time, and she looks optimistically bright despite her terminally ill future.

MBC’s Wednesday-Thursday drama Radiant Office will begin airing after the conclusion of Missing 9. 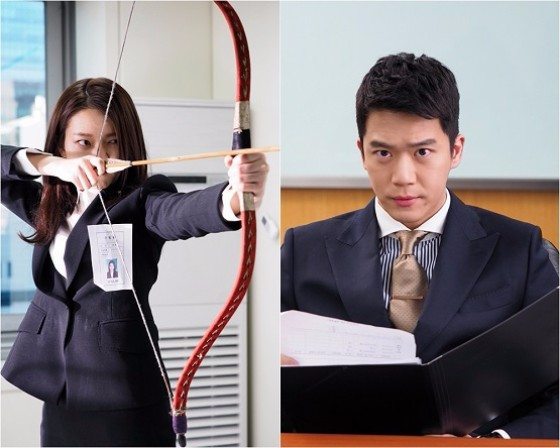 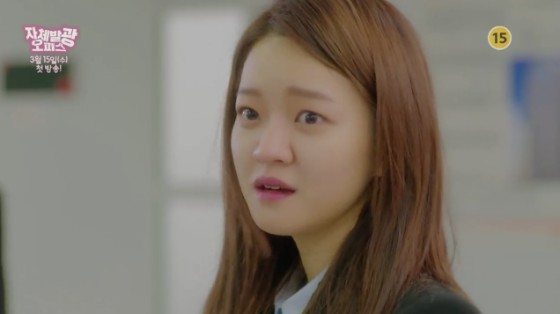 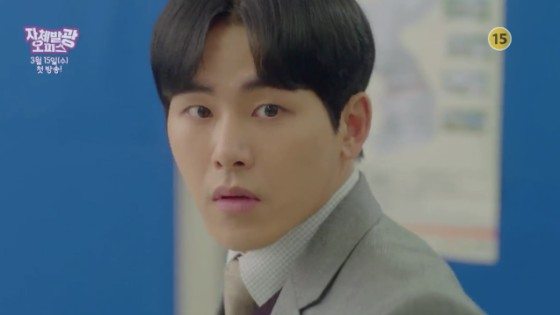 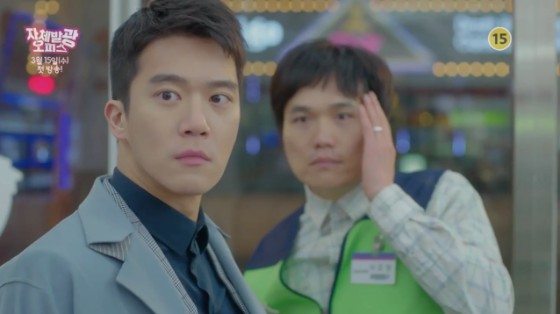 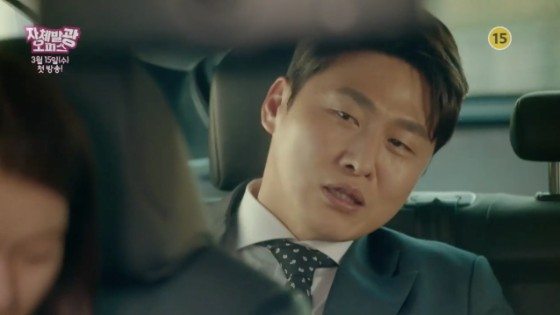 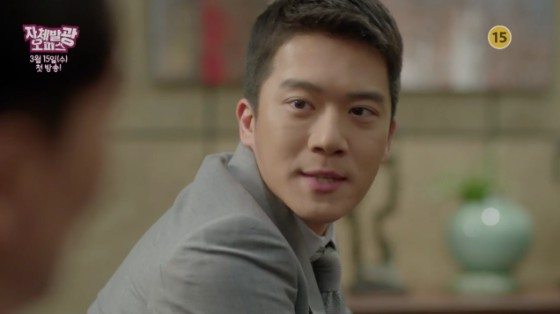 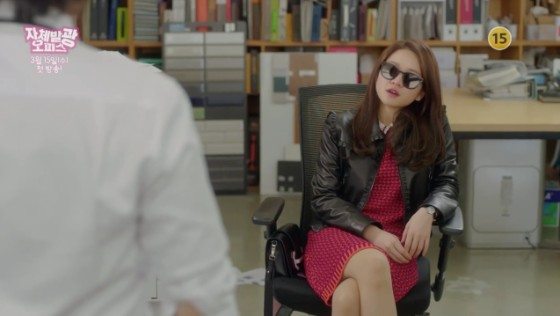 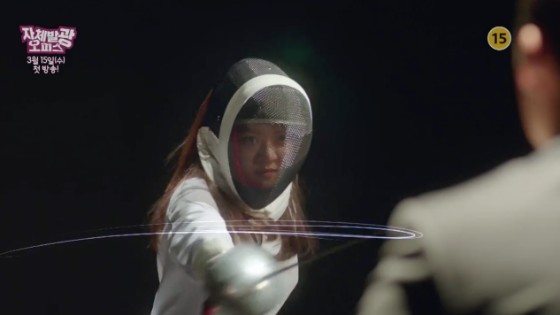 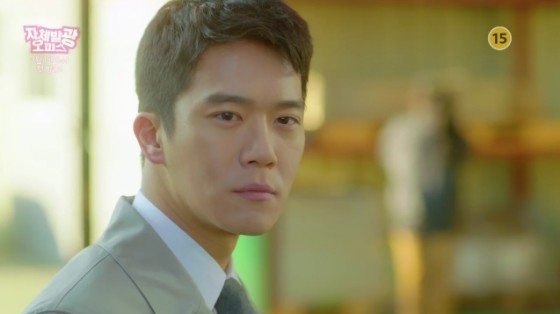 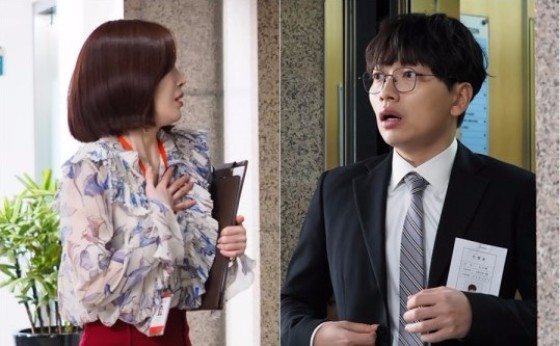 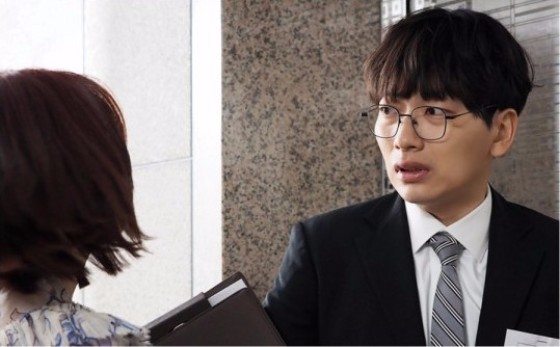 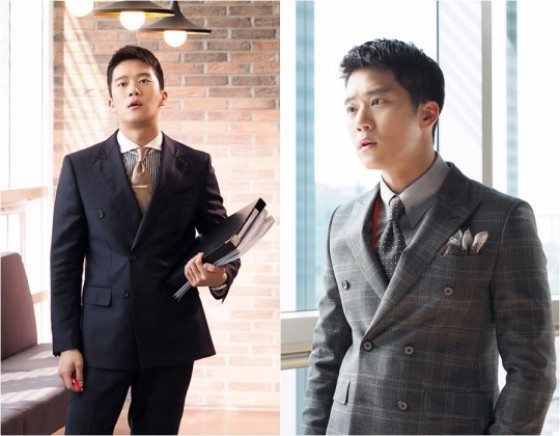 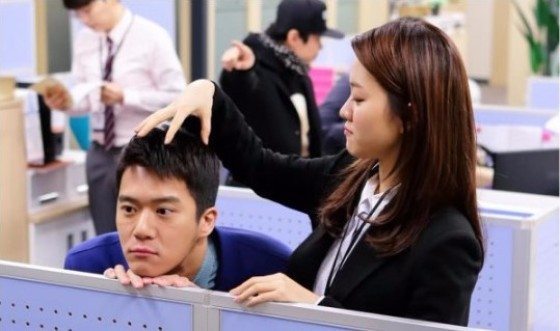 With Chief Kim & Saimdang, the rating of this drama will be more or less like missing 9, perfect wife... If only the network can movie time like cable...

You are probably right. It would take super power for this drama to surpass the current two. However, that doesn't mean it is the worst of the lot or its quality much less.

I have no Wed/Thurs drama on my plate since I gave up on Missing 9. I've been looking for a comedy which I couldn't find in Chief Kim or SWDBS. It frustrates me to no end because I keep reading about how funny these dramas are especially Chief Kim. I have not completed ep 4 of SWDBS which I meant to. As for Chief Kim, I am dogged about watching it. I managed to complete ep 2 but not compelled to marathon the rest. Sometimes, I need to cross a certain point in a drama after which I will happily sail through.

I am hoping this drama will be good. The teasers look fun and I will ignore the overhanging pall of gloom.

I prefer Chief Kim more than SWDBS. I finished epi 3 of SWDBS but not compelled enough to watch epi 4 yet. Radiant Office looks fun from teasers but I will see how it goes first. The writer is a rookie, but hopefully he/she will surprise us with something good.

Hi Sera, throw me a bone. Can you suggest which ep of Chief Kim can I start from since I am stuck in the rut? I tried something like 5 times for Missing Noir M, read recaps for first 4 and marathon from ep 5. I ended up loving the show. Maybe it's just a quirk of mine :D

@ET I really want for you to pick up from 1st episode lol. Bu tbh with you when I watched earlier episodes, I wasn't fully invested until epi 5, when his team members started to get along with him. Maybe you read the recap until epi 4 and start watch from epi 5? When I finished epi 6 I went back to rewatch from epi 1. lol.

Thanks for the tip, Sera ;)

I was about to drop Chief Kim from episode one because it wasn't that addicting and I didn't get what's going on, but I ended up watching episode 2 after the cliffhanger, I enjoy it now it's getting better each episode i love his accounting team and his interactions with Yul I like it when both of them in one scene, i am watching Nam Sang Mi for the first time and i can say i like this actress, in the first few episodes she wasn't likable as a character but then she changed to a funny outgoing character.
Maybe watch more few episodes if you still not interested maybe it's just not your thing.

It is probably right that we should at least give 4 episodes a try before decide whether to continue or not, especially if first two episodes weren't that addicting.

Most of the time i drop dramas if I didn't like the first episode or don't find it engaging.

with Age Of Youth I didn't like the first episode so I dropped it, but I kept reading good reviews then I decided to give it a chance and I ended up enjoying it.

For me, if I can watch up to epi 4, I will stay. But if epi 1 or 2 failed to make me engage with the story, than I will drop and don't care about the reviews. lol. Among the example are Misaeng and Healer, regardless of the positive reviews.?Maybe there will be the day I will re-pick up these drama.

Misaeng was very different from any kdrama I was watching then. It wasn't super addictive from the start but interesting in a way. Turned out to be a really great drama.

Healer on the other hand was a much easier watch but I didn't come away with the feeling that I have watched a great show. The reviews though were something else especially here on DB where the comments ran into unprecedented pages.

Reviews don't influence me entirely in my watchlist but I dont' view them in the same light for different genres. For dramas like Misaeng or Age of Youth, I tend to rely on them more. For romance like Healer, I don't even read(it's impossible with that many pages!) and I'd probably have to go through many "OPPA!" comments before I get anything. Not that I haven't squee in some of those rom dramas I love.

Ha Suk Jin reprising his role as yet another major jerk AH boss, no problem.

I guess it will be just her imagination...

so why exactly is terminal illness necessary here? like what does it add even? cant it just be a regular workplace comedy omg?
I was on the fence about checking it out anyway because while i love go ah sung, it's p typical plot and im not that into workplace dramas (i dont hate them tho unlike medical dramas which i despise lol)
the whole thing is extra depressing cuz the heroine is so freaking young, like wtf?
ah well, more time to watch other stuff. im getting into chinese historicals lately ne way haha.

i did not thk ur title was literal until i saw the picture on them really butting heads lol. I hope his arrogant boss character doesnt take too extreme in early stages- and quickly lets us warm up to him- more of Something like 1% and less of Drinking solo.

I second that. But it's going to be hard for me to embrace him in a romance with anyone but DaDa! ;)

Me too! They really were butting heads lol!!

Oh the shorts looked funny and quirky. Looking forward to this drama

Like I've stated recently, the current batch of K-Dramas are leaving me cold. There's nothing grabbing me and I'm re-watching some old ones to relive the magic. Let's hope something good comes in the next batch.

Finallly i can see ha Seok jin agaaaiiiiin ???? and of course dong hwi n Hoya tooo love them ?
Wish the plot Will be interesting

Hoping this doesn't focus so much on the terminal illness cos that makes me stay away from dramas. Or at least, don't turn melo. Otherwise, this'll be on my watch list :)

HSJ turned me into a fan after 1%. It'll probably take some getting used to see him being in love with someone else. Him & Dada were just sooo in love it was #relationshipgoals

and he also brought the suits along, it appears ...

Became a fan of HSJ after 1% and i love him as an actor. But i think he needs to take up some different roles soon. I keep seeing him as Jae-in or as Jin-sang. I can't differentiate the roles that much now.

I am looking forward to this drama. I like Go Ah Sung. Although i havent seen any of her drama but watched some clips from Heard through GrapeVines and she seemed pretty cool in there. Sucks she is getting such a competitive time slot but hoping for the best. The teasers looked funny and sweet and the plot sounds intresting also...NOW THE ONLY THING THATS KEEPING ME AWAY is the terminal illness. I hate this troupe. I am sure its gonna become so sad towards the end. Well hoping for a happy ending . I dont mind a fake out also where we find out it was wrongly diagnosed.

Ha Suk Jin is the Best when it comes to Office Dramas.. i find him awesome in Drinking Solo..He is also a good actor he was awesome in 1% of anything...so i can't wait.. i'm anticipating....

This drama looks really good! I think it'll do well. People love office dramas and this one has a good cast and seems humorous. Saimdang is going to fade I think. I tried to watch it but it was such slow go. Not well written. I read that ratings were dropping. Looking forward to it!