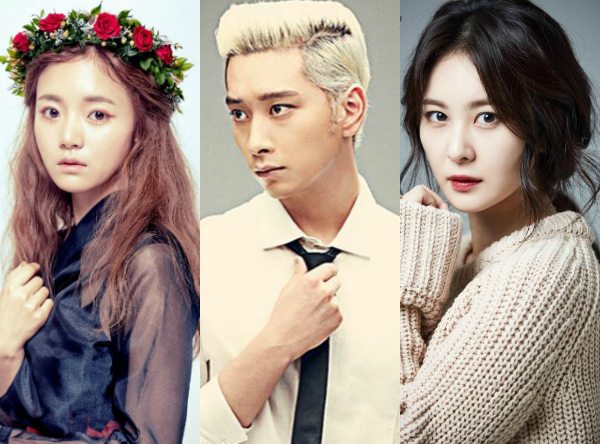 A few more cast members have been confirmed for KBS’s historical drama Seven Day Queen, which will tell the story of the Joseon queen who had the shortest reign ever in its half-millennia-long history. The title character, Queen Dangyeong of the Shin clan, will be played by Park Min-young (Remember—Son’s War), while her husband King Jungjong who couldn’t protect her from dethronement will be played by Yeon Woo-jin (Introverted Boss).

Their tragic love takes place in the midst of great political upheaval and unrest due to the bloody tyranny of Jungjong’s half-brother, Yeonsangun, who will be played by Lee Dong-gun (Laurel Tree Tailors). Currently in Rebel: Thief Who Stole the People, Kim Ji-suk is killing it in the same role as a mentally unstable ruler with a mama-boy complex, so I’m excited to see how Lee Dong-gun’s portrayal will contrast. Likewise, I’m curious about how Sohn Eun-seo (Voice) will take on the role of Jang Nok-soo, Yeonsangun’s concubine and confidante, currently being played by Honey Lee in Rebel.

As Jungjong realizes that his half-brother is out of control with his cruel perversions, he sets his mind on staging a coup, and makes Myung-hae, played by Go Bo-kyul (The Lonely Shining Goblin), his political partner—she’s a shrewd young noblewoman who has lived immersed in the diplomatic world since birth because of her father.

2PM’s Chansung (Ms. Temper and Nam Jung-ki) will also play a character who supports King Jungjong in his efforts; he’ll be Jungjong’s truest friend, who has been deeply loyal to him ever since Jungjong saved his life in childhood. This project will be both Go Bo-kyul and Chansung’s first attempt at the sageuk genre.

The palace intrigue and painful romance of KBS’s upcoming Wednesday-Thursday drama Seven Day Queen will begin on May 31.

Ooooh Chansung in a sageuk? Hm, I hope he can do it... am looking forward to it.... although, considering the actual story and the possible bitter-sweetness of the story, I may have to wait until it is all over so I can binge watch and cry....

i cannot really imagine him with sageuk hair..

Chansung had long hair when he debuted as 2PM. He didn't look that bad, don't worry ;-) .

I am nervous for him. He does light comedy so well, hopefully he can manage a heavier role. I am intrigued to see what he looks like all decked out joseon style.

I like him so hope he does well. There is going to be bromance so let's hope it will be epic!

You know, it's strange. Every now and then, I'll come across an idol that miraculously acts better in sageuk. Like Jinyoung from Moonlight. Maybe that will happen here!

@chandler: Yes indeedy, Jinyoung was excellent in MOONLIGHT. I'd love to see him in another sageuk.

The only show I've seen Chansung in so far was his extended cameo in ROMANTIC DOCTOR, TEACHER KIM. I thought he did well in it, first as a patient in a hospital emergency room, and later as the friend who brings his injured AWOL buddy to the ER.

Chansung's upcoming role in SEVEN DAY QUEEN sounds analogous to Lee Gyeom in SAIMDANG, LIGHT'S DIARY, which is portrayed by RTDK's Yang Se-Jong (young) and Song Seung-heon (middle-aged). YSE has been great in a dual role that gives him a lot more leeway for expression than his surgeon role in RDTK. But whether he's wearing surgical scrubs or hanbok, he delivers the goods.

In SAIMDANG, Choi Jong-Hwan portrays King Jungjong, the elder cousin of Lee Gyeom. It will be interesting to see Yeon Woo-jin's take on a younger version of that character.

As for the role of Yeonsangun, Jung Jin-Young's portrayal in THE KING AND THE CLOWN is the first I've seen, and he was completely bananas. It came as a shock after seeing him play another monarch in KINGDOM OF THE WINDS. Kim Ji-suk has been doing a dandy job of portraying the tyrant in a sympathetic light in REBEL, and is just beginning to turn overtly evil. I'm looking forward to Lee Dong-gun's take on the role.

Speaking of Yang Se-jong, you're right, his dual roles in Saimdang gave an opportunity for him to flex his acting capabilities more and that he looked good in scrubs and hanboks. I am looking forward to his performance as the murder suspect and his evil clone in Dual - maybe it would be another fit? :-)

Hm, as long as Sohn Eun Seo has a bigger role than her PPL scenes in Voice, I am okay.

I'm fine with the cast so far so I'm looking forward for this!

It's quite challenging for the actors who will play the same roles as in Rebel, people used to a certain actor portrayal specially who watched Rebel they can't help it but will keep comparing those actors performance.

I think it's too close on the heels of Rebel.

It's gonna be a sageuk party, so many to look forward to.

Hope this one does well, I like the cast.

Not only their actings, they should also work on their pronouciations since this is a sageuk..

A big, juicy, tragic plot can be epic but it can also be pretty silly if not done just right. A lot of young actors, not much sageuk experience, and then...Chansung? I am staying FAR away, this has mediocre written all over it.

*Sigh* I just don't get KBS these days. Kind of feel for the leads who are going to carry this. I hope they'd cast more veteran actors.

Chansung oppa in sageuk.........I am so nervously looking forward to it....fighting

What happened to Chansung's other drama?? (I think it was called Housewife Detective)

I heard that it's pre-produced but I think it would be in the Autumn-Winter lineup since an airing date has not yet been secured.

Looking forward to this! ?

Actors Baek Seung-hwan and Park Si-eun have confirmed to play the young King and Queen as well. The two played young Moo-hyul and young Yeon-hee in Six Flying Dragons.

I am liking the casting so far. Whoa I am excited with this drama although it will rival with the drama of the other pair of my fave OTP (here for PMY, and JCW for Suspicious Partner), it is ok, I am just thrilled with their individual dramas which are getting both positive feedbacks.
fighting Seven Day Queen!