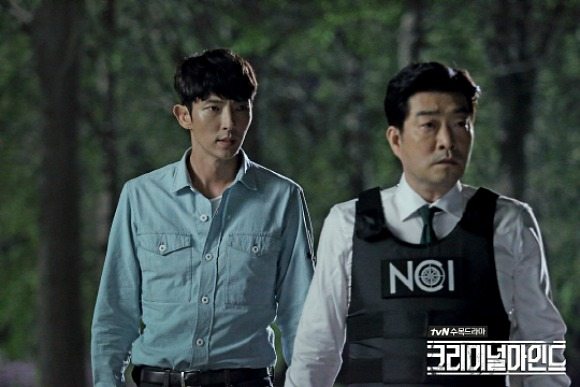 Yikes, it has been revealed that PD Lee Jung-hyo, one of the directors on crime thriller Criminal Minds, officially left the production last week, right before the show started airing. The reason for his departure has been explained as “creative differences” between PD Lee and drama production company Taewon Entertainment.

Criminal Minds was originally supposed to be helmed by two PDs, so PD Yang Yoon-ho will now be acting as sole director of the show. It’s unfortunate, because I do think PD Lee was a big draw for me given that his last project was The Good Wife, which was gorgeously shot and directed. Not to say that PD Yang is a lesser director, but he’s more involved in films, and the last drama he helmed was 2009’s IRIS, which was quite a while ago. But maybe this development is a good thing, because it sounds like this was a case where there were too many cooks in one kitchen.

Taewon Entertainment came out with an official statement once reports started appearing of PD Lee’s resignation: Originally, filming for Criminal Minds was supposed to be handled by an A team led by PD Yang and a B team with PD Lee in charge. This setup isn’t unusual in dramaland, but once they started rolling the cameras, they decided to combine the two teams given the volume of filming they had to do. That’s probably where the problems started, since there were apparently a lot of difference of opinions on directing choices, from the music selection to editing.

PD Lee then announced his intention to leave, and while Taewon “tried to persuade him to do otherwise,” the production company received notice from CJ Entertainment (tvN’s parent company) that he had officially left the show. I just hope that this doesn’t affect the show negatively, because I’m looking forward to starting it once life stops getting in the way.

Since the directing/editing/pacing of the first two episodes were quite awkward and unfulfilling, I hope that following one direction will offer cohesion to this drama^^

I hope this won't influence the show in a negative way but I thought this was pre-produced so isn't it already done filming?

The directing and editing in the first 2 episodes is so bad. Its really decrease the tension, no suspense at all, no detail process to the ongoing case, we dont witness how they came up with some point to solve the case, the interaction between characters is so awkward and have no chemistry at all and the worst is....I ((as a viewer)) cant feel the urgently needed feeling to find the victim coz its just a dull and null show without any thrilling feels.
According to the news, Lee pd left the show before its airing. So, the first two episode helmed by yang Pd.
I just hope he will improve coz its such a waste iwastes drama turn into bad dramas dramase based story is good and the actors is awesome

They have already started filming before it aired so Lee PD is involved in the first two episodes. I think that's why the directing is not good because there are problems between the two PDs.

Sorry to say, but the leads acting so awkward

the fact the they are talented actors, yet you say they're awkward? you must be new in kdramaland.

They can still be awkward even if they're talented. Even talented actors ham it up sometimes.

Talented actors can have bad performances. Are you new???

I'm a 10-year veteran of dramaland who thinks both leads have been excellent in other projects, but I also found them a bit awkward in the opening episodes. At this point I'm chalking it up to directorial issues, so I'm hoping for improvement. Great actors can certainly have weaker performances, but I usually blame the director in that case because he's the one telling them what he wants.

Talented actor can have bad performances. Example in hollywood is Eddie Redmayne who won an oscar and starred in Jupiter Ascending (he's really bad there) in the same year.

Rather than awkward actors, this is most likely an awkward editing. The scene is just not as beautiful as Tvn always did. They did great on Signal, why did so bad on Criminal Mind?

IMO, the acting was awkward in the first episode. But in light of this, I suppose the two directors gave conflicting interpretations of the characters, which contributed to the rather stilted delivery.

And I was thinking of the drama that can not be spoken about..
The time I've.....

He's one of my favourite PDs and yet I was underwhelmed by the directing in the first 2 episodes. Something felt off and it wasn't as smooth as his previous works (Cruel City, The Good Wife), as if the PD duo couldn't figure out if they want to go for style and mood (how he directs), or be bombastic (Ha!) - like what the IRIS PD wants. I ended up complaining in the inside and comparing it to FoS a lot ("Uh this profiling thing is great and all, but Shi-mok's already done it, and better at that" or "Why do you have to be so intense all the time? and yet all the intensity doesn't equal tension; FoS is subtle but the tension is dialed up high")

Nevertheless, this is disappointing news if it means the direction from now on will go more to the IRIS way, but I guess that's still better than being confused.

I can only imagine two experienced PDs trying to hash this out together and it not going well. I am interested if anyone knows how far along they were in filming. I didn't have the issues that others did. Sure things were rushed especially at the end of episode 1, but on another site, some viewers went back and actually reviewed episode 1 of the original and said they actually found it to be even more rushed. American tv pilots are what are used to determine if a show is picked up so I can imagine they tried to get a lot done.

Criminal Minds isn't a character driven drama like The Good Wife and Cruel City are. I think this is why CM has managed to survive so many character changes over its 12 plus year run. As long as the doc and Garcia are around, it's all good. Maybe that doesn't suit the PD who left...I just heard it was about editing and music.

I feel for the actors and the staff and crew because I'm sure this makes everything more stressful.

I'm enjoying the show with the cast though it does get choppy at times. I hope with just one PD, there won't be any more conflicts in direction and things will improve.

why is jun ki always stuck with editing crisis?

I know, Joon Ki's bad luck with editing doesn't seem to be ending. And I also couldn't warm up to him or Moon Chae Won especially MCW, she seems very wooden and I am surprised because I know she can do better.

what TVN planning to do that? i hope its a joke

It would just be ironic, considering the Scarlet Heart editing mess.

yeh i was surprised when SBS did that honestly coundnt they check before airing if it was good, they re released scarlet now TVN got bad at editing too. the actors, staff and crew might have gone crazy trying to follow different styles of both Pd's and trying to satisfy both it clearly shows in ep 1 that actors could neither go this way nor that way and we all know they are top class actors, this shows how much directors and editors are important

Not only Lee Jun Ki but the whole cast and crew involves.

I have the problem when the characters start to act like they are giving us a lecture about the case, instead of really doing the case investigation. They should treat the audience as people who ride the same vehicle with them, not just as bystander watching them doing what they are doing. The cases are not quite engaging, really. Try harder

Oh no!! I was planning to watch it because of the leads.. but now I'm not sure if it's good since the reviews also mixed. Usually PD change spells trouble.

No change in the PD. Just the 2nd PD is out. Left the main PD. As for the mixed reviews.. it's expected from a remake. Bound to have people who will compare the original vs. remake and aren't pleased with the remake.

There it goes my reason to watch this show. Was thinking to pick this up after FoS ends. Never been a big fan of original CM, just casually watch it whenever it's on TV. But I thought this could be an easy watch because of the PD, just like how I ended up enjoying The Good Wife even when I only bothered to watch the first season of the original.

Hope the drama will turn better. I 'deleted' the US version CM from my mind to enjoy this show, but the first two episodes, I don't really see much profiling. The young doctor profiler and computer expert lady were difficult to watch.

Honestly, this Criminal Minds is just boring. I tried watching up to episode 3, and nope.