Casting out demons with Kim Jae-wook and Kim Dong-wook in Hand: The Guest 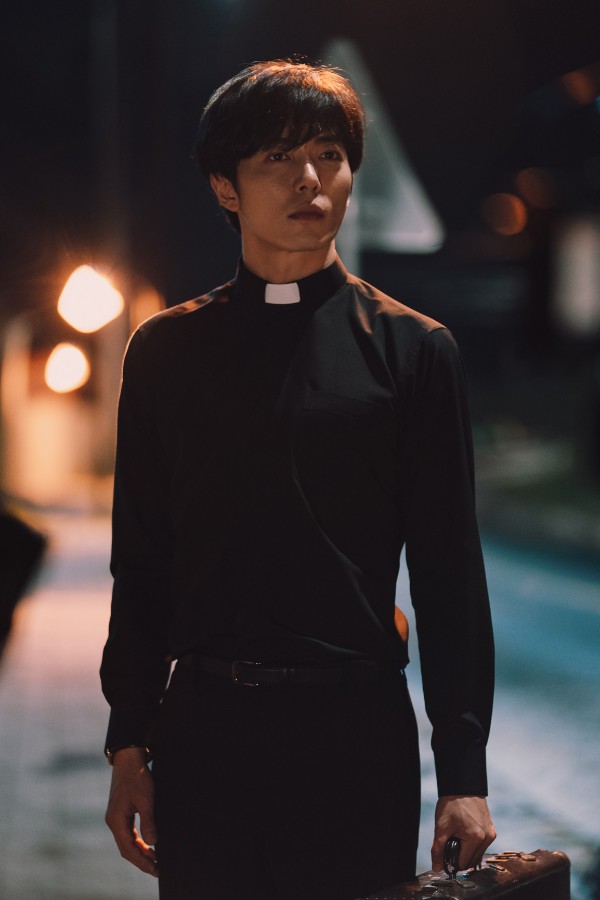 OCN is doing what it does best—dark gritty horror-thriller—with Hand: The Guest. Starring Kim Jae-wook (Temperature of Love) and Kim Dong-wook (With the Gods), this drama tells the story of a priest, psychic, and investigator who fight supernatural crimes.

Well, this drama already had me at Kim Jae-wook, but then it threw him in a smexy priest’s smock and now I’m just plastered to my computer, rewatching him in the teaser charismatically smolder into the camera. He plays a priest with a tragic past; in his childhood, he had an encounter that led him to believe in demons. Appointed by the diocese to be an exorcist, he lives an isolated life casting out evil spirits that have possessed human beings.

Kim Jae-wook’s character, Choi Yoon, is described as the typical ice man, a rule-abiding, emotionless cynic. In the teaser, he commands a demon to go back to hell as scenes of people with signs of possession are shown. Later he says to someone: “Even though you don’t know evil well… even though you’ve never felt the pain that evil causes…” The vibe and color tone of the teasers are very reminiscent of PD Kim Hong-sun’s previous dramas like Voice and Liar Game, and I’m loving it. Kim Jae-wook was also in the popular suspense-thriller Voice, so the reunion with this PD for Hand: The Guest is drawing lots of attention.

On the other hand (hur, couldn’t resist) is Kim Dong-wook who is, in my opinion, one of the most underrated actors in dramaland. I was originally taken by his performance in Dandelion Family, and I’m looking forward to seeing him act opposite of Kim Jae-wook as a psychic medium who communicates with ghosts. Coincidentally, he also had a traumatic childhood experience that burdened him with a darkness in his heart. Could the two childhood incidents be related?

Unlike Kim Jae-wook’s character, Kim Dong-wook’s character lives a relatively normal life at least on the outside. Perhaps he adjusted better because he comes from a generational shaman family. Despite his “normal life,” he’s been trying to find an evil spirit that lives in the past and the present with his psychic abilities. In the teaser above, he informs Kim Jae-wook that the human has been possessed and that another person will die again.

The last teaser below starts off with a line that asks you to put your earphones in. Throughout, Kim Jae-wook prays to God and the Holy Trinity to protect them from evil demons, and asks the Lord to cast them to hell. 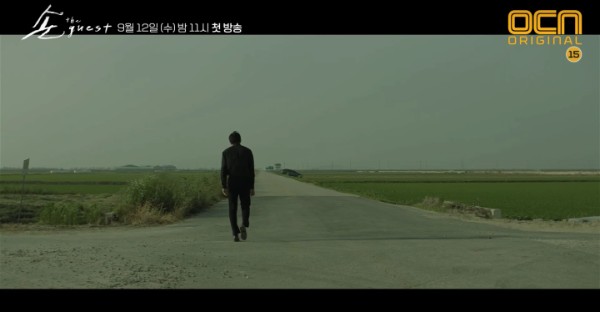 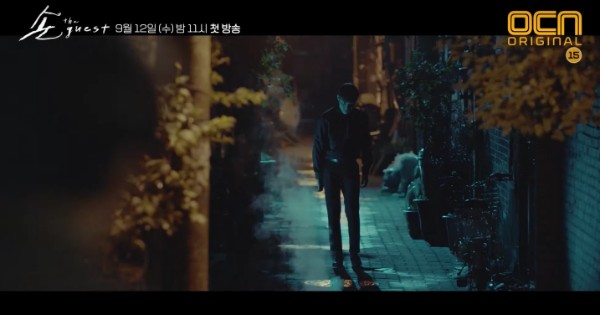 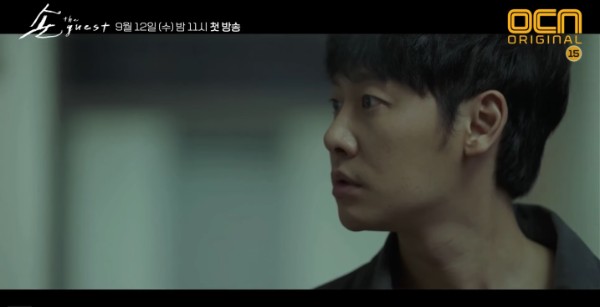 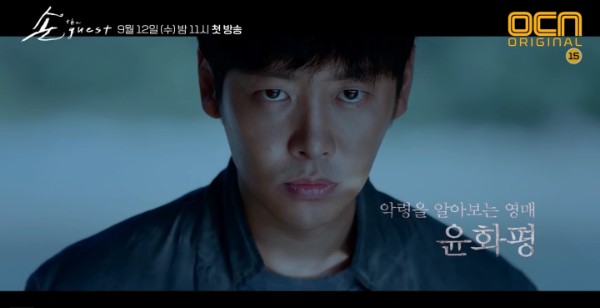 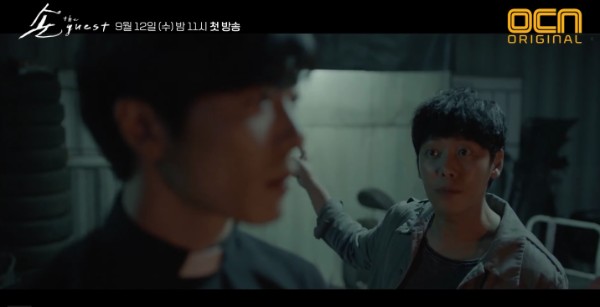 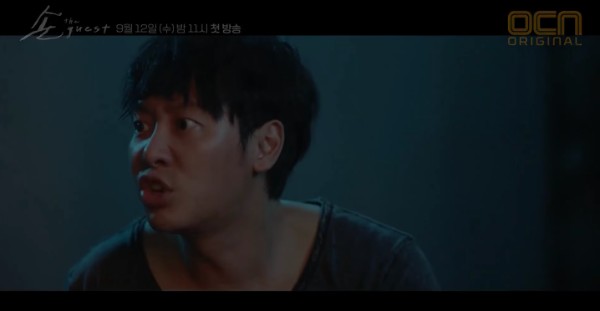 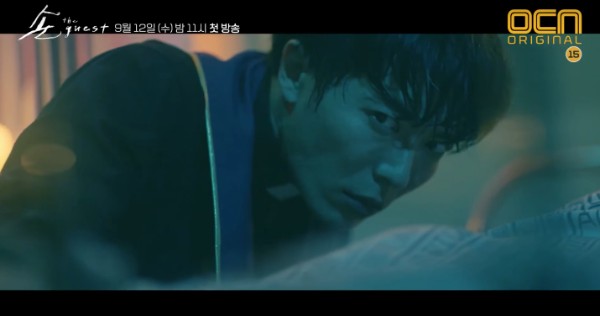 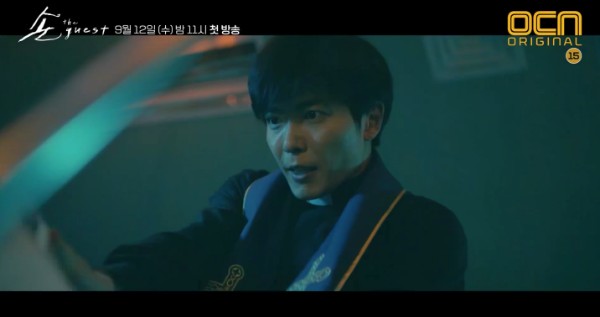 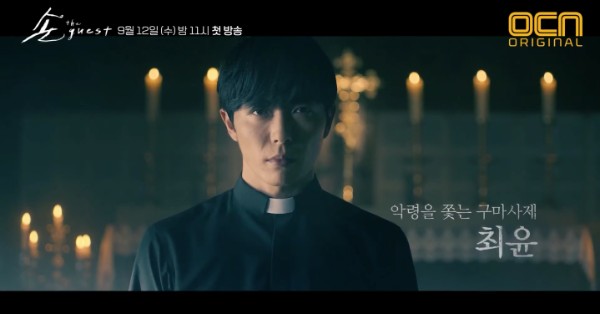 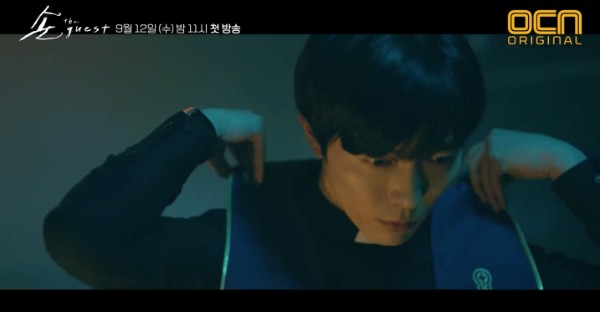 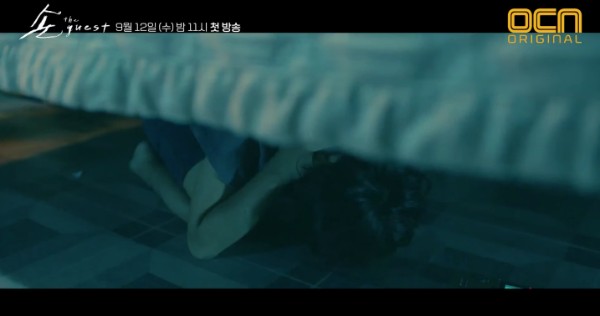 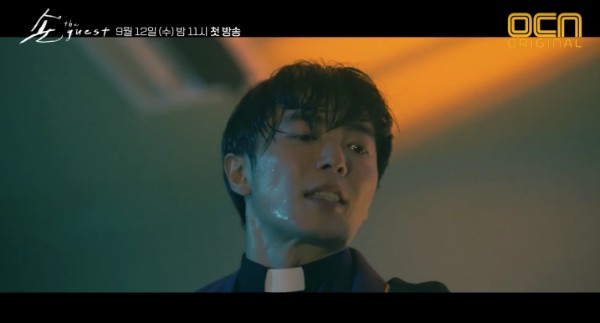 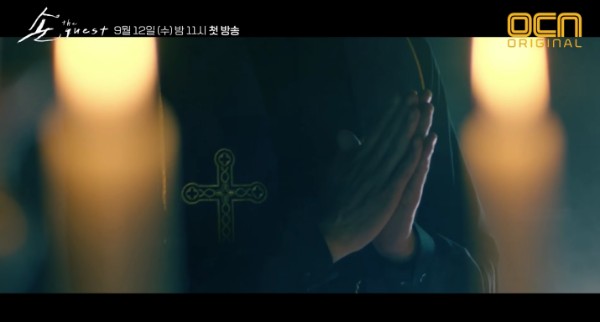 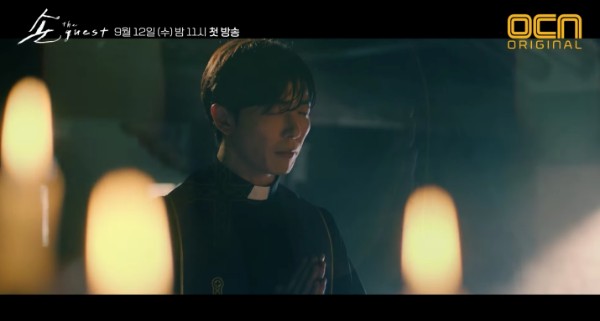 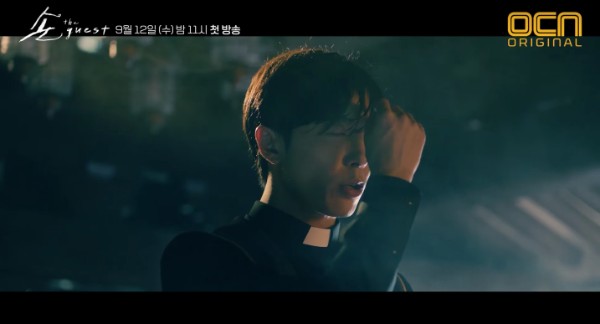 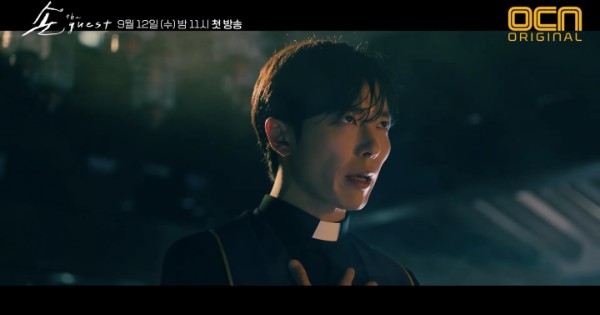 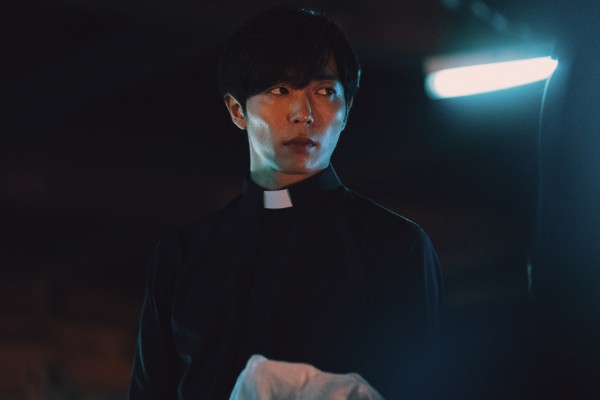 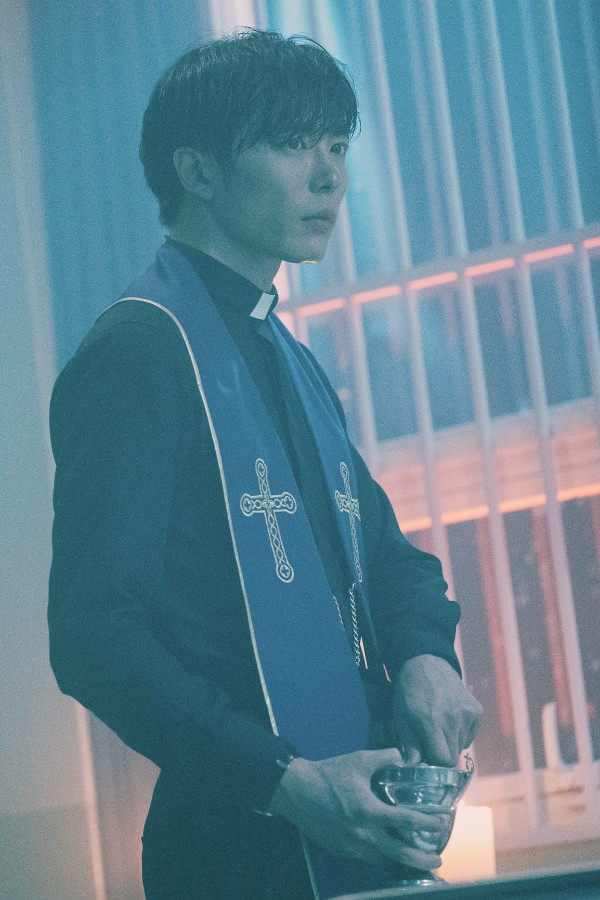 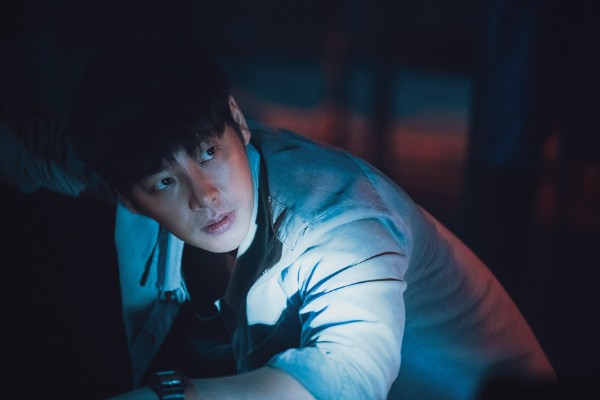 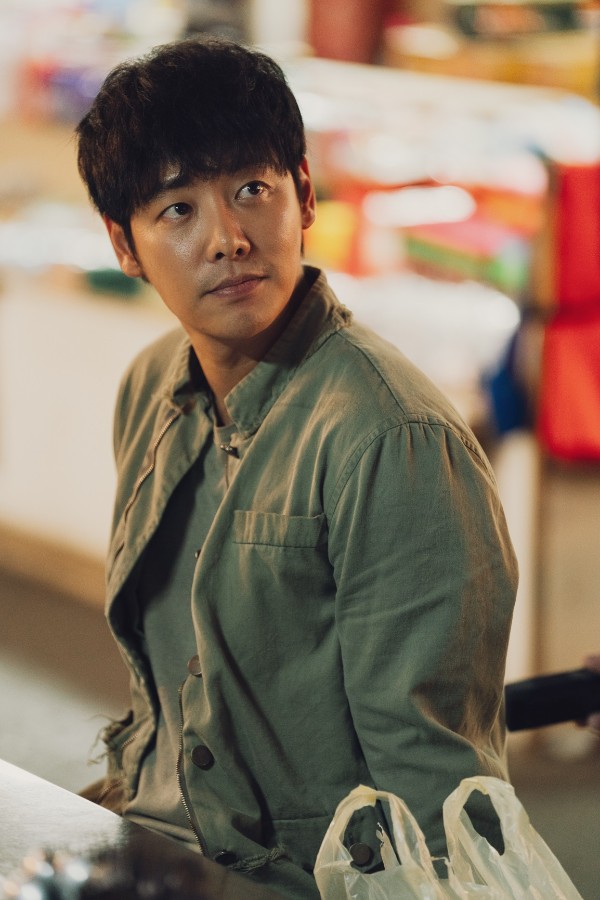 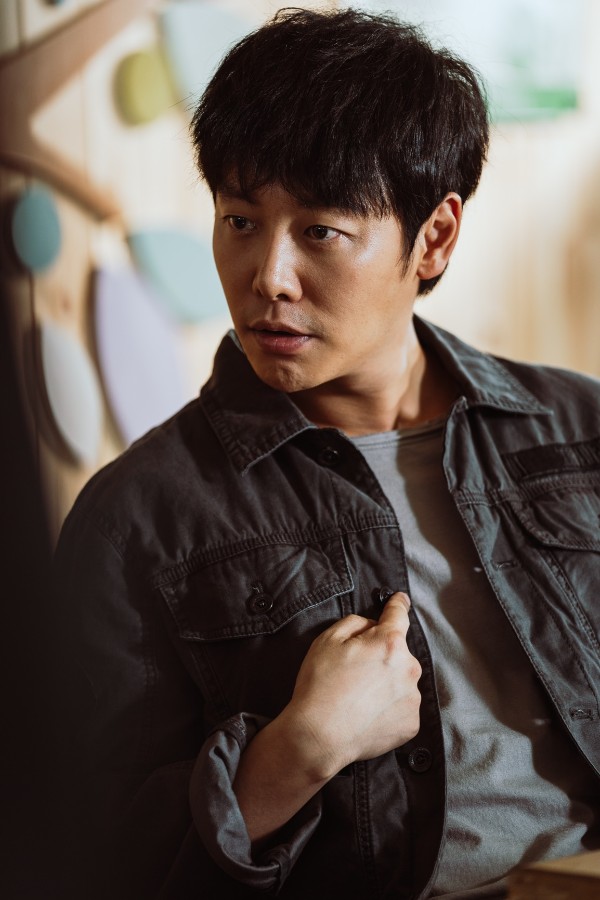 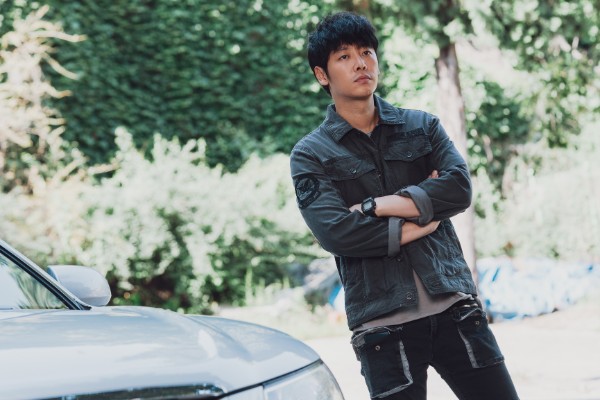 Finally OCN is going back to real scary gritty.
I read that they're opening a new slot for this drama, the Wed-Thu one.
And the best is that after this, the next drama in that slot is the new season of God's Quiz.

Finally dramaland is hearing my prayers. When will MBC and SBS ??

Have you watched Voice and Voice 2 (ongoing)?

I've read that Voice was a little boring, so I don't know if I should watch it.

Well the main lead is actually Lee Ha Na. She’s the one with special hearing ability. Season 1 was a bit draggy at the end, but season 2 so far is good to me.

True. I lost interest for later episodes of Voice 1 and only watch KJW's scenes.

I don't like Jang Hyuk's character that much in Voice 1 because he keeps yelling and depends on Lee Hana for observation skill but the cases they encounter are still creepy esp the kid who need to hide because his mom wants to kill him. But the main focus definitely our hot serial killer.lol

Voice 2 is my favourite so far since they changed what I dislike about Jang Hyuk's character. Jin Wook is calm even when he's angry and just show his resentful with his eyes. He also a very sharp observer on site.

The main focus is still Lee Hana. Both guy leads are the one who helps her. She's impressive. Very rational and never get mad on site. One of professional investigator in kdrama land.

Thanks for the heads-up re: GOD'S QUIZ: REBOOT. Ryu Deok-hwan is shown on the AsianWiki page, and I can't wait. First a judge, now back to being a medical examiner. ;-)

Would the show please give us just a little delicious meta crumb and have the Priest and the Psychic meet over coffee and waffles?

Now I'll be disappointed if this doesn't happen. A Gong Yoo cameo as a demon would also be a nice bonus.

LOL, that'd be awesome to have Goblin to make a cameo as a demon!
My cameo fantasy is a little more modest: Priest and Psychic will cohabitate with Kim Chang-wan as their landlord.

I wasn't even thinking of him as a Goblin, but rather a demon barista.

Along with a little help from a forgetful Grim Reaper. ;-)

OMG that would be so great

Kim Jae-wook lord help us. I hate thrillers so I will be watching with my hands over my eyes.
The internet is now capable of taking the thoughts right out of my head, "Well, this drama already had me at Kim Jae-wook". My thoughts exactly!

I've been really looking forward to this one!

"Well, this drama already had me at Kim Jae-wook"
How true is that? He is just all kinds of sexy-gorgeous-smoldering isn't he? If it is on OCN I'll be watching it.

Sexy psychopath on Voice.
Sexy priest who is broken on Hand.

Am I just going to spend the entire career of Kim Jae-wook putting the word sexy in front of all the characters he plays because...that man is...just...he is doing it for me.

yes he is one man who really makes me want to SIN - big time!

Love that play on words.

I adore both these actors and find them both wholly underrated (I legit dropped a tear of joy that KJW would be lead) but my girl Jung Eun-chae doesn’t get a teaser? I’m so tired of the sausage fest that dark thrilling dramas tend to be. Hopefully she ad prominent and utilized as the two men.

Yep, they are both totally underrated. I actually didn't realize what a good actor Kim Dong-wook was until I saw him in With the Gods. He was amazing and I thought he outshone the A-list actors (even though I like all of them).

I've wanted w leading role for so long... Actually one year, but long enough... Now he gets to have more screen time and a show all about him... Thank you drama gods 😭 😭...

Sounds intense and intriguing. I'm actually really interested which is a surprise considering I've been avoiding all things horror since last year.

"Coincidentally, he also had a traumatic childhood experience that burdened him with a darkness in his heart. Could the two childhood incidents be related?"

ummm ...do kdramas always have a piggyback scene? 😉

I have a feeling TOD will be making an important cameo.

If it's possession and ghosts, we might also see the Bridge of Non-Doom? Or perhaps an even more creative choice, it's older cousin the Sageuk Cliff of Non-Doom.

I'll go ahead and say it: "Is the Pope Catholic?"

I fully expect a juicy Birth Secret, along with a Mudang's Premonition.

Yes, instead of asking about the piggyback I almost asked a personal favorite, "does the Pope sh*t in the woods?" but feared that might be a bit obscure. Or offensive? Whaddya think? 🤣

It all depends on how you feel about being struck with a gazillion amps of lightning. ;-)

Wouldn't the drinking game be better?

ASMR for his hot voice? LOL I'll take it.

The moment I read the synopsis of this drama at koreandrama.org, I’ve been waiting for this drama to air. I hope it’ll surpass my expectation because I kinda need a dark-disturbing drama at the moment.

I was waiting for this. *only 21 days to wait now*
Kim Jae-wook is looking so damn sexy even in the Priest dress. Now I've to fangirl over a priest. Is that acceptable? ^^

When I first saw the pictures, I was thinking "Oh why Lee Sang Hoon is here ?" until I realized it was Kim Dong-wook...

I like the cast ! And the story looks good.

This is actually a very nice thing for me. A drama less to watch 😂

are you sure you put in enough pictures of kim jae wook? lol

Wow the thirst in these comments... *generously contributes to the thirst-count*

Thanks for the update on HAND: THE GUEST, tineybeanie. You've outdone yourself with the screencaps. Since I don't feel like calling down a heavenly lightning bolt, I'll just observe that Kim Jae-wook looks good in a Roman collar -- and is probably thanking his lucky stars that he doesn't have to wear a cassock during the dogs days of summer. Excuse me while I recall Shin Dong-wook in LOOKOUT... Where was I?

This drama looks good, but I’m worried it might be too scary for me if it veers towards the supernatural element. I can barely handle bloody, gory scenes; it helps that OCN blurs some parts out.

Tineybeanie, thanks a lot for the article post.Much thanks again. Fantastic.

I'm overly excited for this show ! I hope it delivers and that I can sleep at night.

Why is the priest so handsome?? I suddenly feel like sinner, so bless me father for I have sinned 😔

but jokes aside, I can't remember a kdrama with a priest as a main char so I'm curious about this, it reminds me only of KDW's movie The Priests..

I think the 손 in the title, comes from 손님 as in "guest", but removed the honorific 님 as the "guest" they refer to is evil spirit. The English part in the title is to clarify the meaning of the Korean word title.