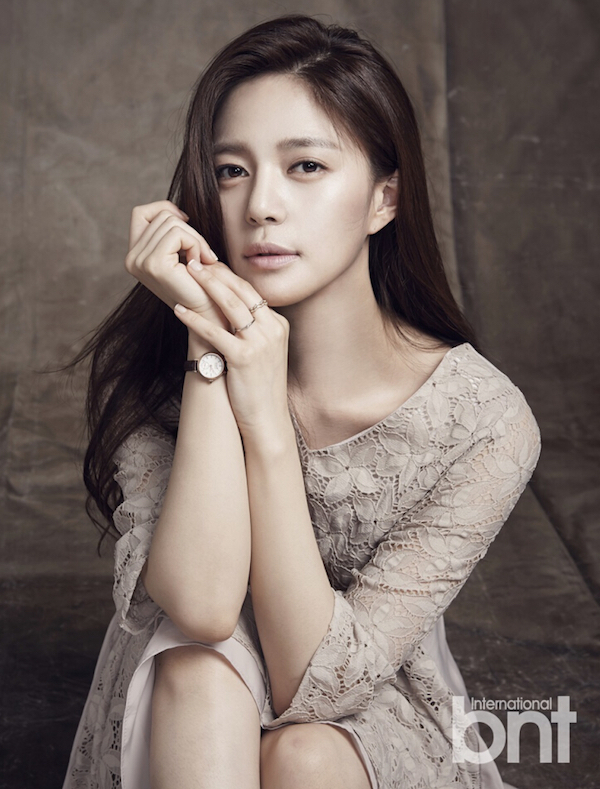 Actress Lee Elijah (Miss Hammurabi) has confirmed her next project to be An Empress’s Dignity, a modern-day love story set in an alternate reality where Korea is ruled by a constitutional monarchy. Jang Nara has been cast to play the lead, a musical actress turned empress, while Lee Elijah’s agency announced that she will play the role of the antagonist Min Yoo-ra for this upcoming SBS drama.

An Empress’s Dignity centers around a cheerful, bright musical actress who suddenly experiences her own overnight Cinderella story when she marries the emperor. As she enters the palace, she must fight absolute power to uncover the truth of the dowager empress’s murder and take down the corruption from within. Along the way, she learns to find love and happiness. Hmm… this sounds like a cross between Goong and Forest of Secrets, and that would be amazing.

Lee Elijah’s character, Min Yoo-ra, is the head secretary who is perfect and decisive at her work. She holds the sacred trust of the emperor, who will be played by Shin Sung-rok (Return, Man Who Dies to Live). She forms a confrontational front with his mother, and enhances the emotional tension of the drama. It seems like a good fit because Lee Elijah has always been good at playing the second lead you love to hate (example: Fight My Way). Also in the cast are Choi Jin-hyuk (Tunnel), who will play a palace bodyguard, and Shin Eun-kyung (Village: Secret of Achiara) as the dowager empress, who ought to be amazing in that role.

Writer Kim Soon-ok (Temptation of Wife, My Daughter Geum Sa-wol) and director Joo Dong-min (Return) are helming this project. Here’s what I can say about this partnership: Kim Soon-ok’s dramas are as addictive as crack cocaine, and almost always contain makjang tropes. I haven’t seen Joo Dong-min’s latest Return, but there was enough strife on set that it made its lead actress quit mid-way through production, and the two other dramas under his full direction The Family Is Coming and Take Care of Us, Captain were not great by any means. Overall, I’m just cautiously keeping hope because I really like the premise of this drama.

I actually can't take this serially when you tell me she's a musical actress. I envision this glamorous scene, ruffled with angst, which Jang Nara decides to combat by busting into song.

I can't unsee this

I'll watch this drama if she sing Let It Go while heading to the powder room.

Is this what you had in mind Frabby?

After a bruising encounter with Lee Elijah's Head Secretary, she goes back to her bedroom, looks in the mirror and sings I Will Survive

How about this one: The charity lunch is a disaster - the food is everywhere, the somehow-disadvantaged children are crying, and Jang Nara's dress is ripped. Instinctively, she starts belting out Don't Worry Be Happy to cheer everyone up just in time for the reporters to show up.

Cue: Total humiliation for everyone involved.

Or: the first time that hubby betrays her, she sings Fake Love

It was attraction at first sight. The world froze around them as she took a minute to sing Somebody to Love.

lol I'm loving this! Beans Of Wisdom, I miss you.

The time for a Korean musical comedy is way over due.

Shin Sung-rok as the emperor! I want! He's my favorite villain.

Honestly, I'm more excited to see his name in the line up than Jang Nara's. I'm sure he'll give us a superb and evil villain. Wait, will he be a villain here too?

so who are the leads? She marries shin sung rok...but there is Choi jin hyuk as a palace guard. well, I would like to get the character chart.

As much as I love to see Shin Sung-rok no longer be villaincast (even though he always delivers with such efficiency), how could
Choi Jin-hyuk not be the "love and happiness" Jang Nara would eventually find in the palace? How could anyone not fall for swoony Fated to Love You DANIEL as the stoic bodyguard in uniform ala King 2 Hearts?
*faints onto his imaginary broad shoulders*

So here is my theory: Jang Nara has this whirlwind romance with SSR and impulsively accepts his proposal for marriage. She goes into the Palace to be "trained" in all manners of court as the future princess and when the dowager empress is murdered, the wedding is put on hold and Jang Nara gets embroiled in palace intrigues. Through that journey she realizes her heart belongs not to the Prince but the Bodyguard.

And Bodyguard turn a out to be the former emperor's illegitimate son. SSR's character dies. JN and CJH marry and become emperor and empress. Everyone lives happily ever after. The End.

Wow, great casts! Anyway, it's been long time Shin Eun Kyung! This writer can write addictive drama in my opinion - but I also think usually it was the casts in her previous drama elevated her script. This PD on the other hand had no great records. Anyway, this drama is worth to check out for these casts but better have no high expectation.

Between Devilish Joy, the Beauty Inside me and this one, why are all the female lead actresses? I get a bit confused by kdramas sometimes. The only job titles for ladies seem to be actress, secretary, lawyer, doctor (and prosecutor). For the men, add CEO to the list.

That's why I welcome dramas with physical therapist, beautician, teachers, ... Some variety, please.

Or high class gourmet chefs. That’s for both sexes. There have been quite a few with teachers as the lead , mostly female.

Or cops. I love it when one or both of the leads are cops. Plus I just like cop shows. ☺

You had me at Choi Jin Hyuk.
Looking forward to this! Alternate realities are always fun. I love world building episodes too!

i will watch anything with choi jin hyuk in it if nothing else to see him!

The premise sounds intriguing; I love alternate reality dramas. That being said I would have preferred it if some of the casting was switched. Nothing against any of the leads, but I get tired of seeing Lee Elijah as the evil second lead. And I hope Choi Jin-hyuk's character has a bigger role than what the description gives. Still, I'm cautiously optimistic about this, so fingers crossed!

The previous report about this show described SSR's king as a bad guy, so CJH could be (come on, most of us want him to be) the male lead, certainly he'll be the one to give love and happiness to the musical-actress-queen. At the same time, SSR is so so good at being bad, I somehow never end up hating his characters.

I like hating on her in FMW. Hopefully, she will not play the cliche second female lead. Surprise us, showrunners!

How on earth did I miss this drama? The cast is perfect!

Shin Song Rok as emperor? Swoon...although I'm a bit sad he won't have a charming( or steamy..*wink wink*...) romance with Jang Nara
Speaking of which, I like my girl in a mystery, add in palace politics and I'm staying

Choi Jin Hyuk, now that's a wrinkle. If he wasn't around, I'd have hope for Jang Nara and Song Rok, but with him here,you can't help but root for them now, can you? Swoony bodyguard...sigh

I'm not familiar with Lee Elijah but I like her character description.
I like the whole synopsis. Honestly, I'm not asking for much from the writer, just make it decent but plenty addictive.

I liked her a lot in her last drama so I have hopes for this one since the cast is stellar.

Pretty sure SSR is the main lead and CJH is second lead. I actually prefer SSR this time around as main lead. Can’t wait!