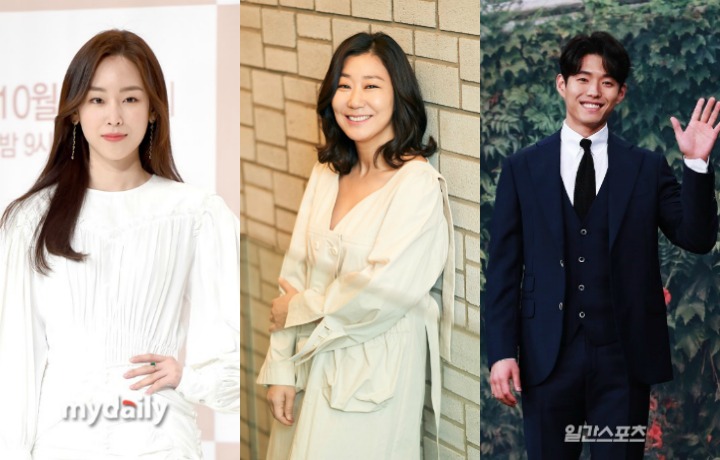 The story is described as a close and intimate view of a microcosm of society: the world within private schools. The main parallel between the “real” world and schools being the struggle of survival, and working towards your dreams while also dealing with harsh realities. One of the drama’s focuses will be on the lives of teachers.

The role that Seo Hyun-jin has accepted is of the central character, Go Ha-neul. Growing up she had been greatly influenced by a teacher who had been a life-changing presence in her youth. Since then, she had always dreamed of becoming a teacher herself. When we meet her, she’s just starting her career, and she takes a temporary teaching position at a private school where she is confronted with all sorts of new and special challenges.

Ra Mi-ran takes on the part of Park Sung-soon, head guidance counselor at the same private school. A workaholic and passionate about her job, she is willing to do everything and anything if it means helping the students. She is even known to frequent admission offices at universities to act as a wingman for her students and increase their chances of being accepted. When Seo Hyun-jin starts her new position at the school, Ra Mi-ran takes her under her wing as a mentor and the two develop a friendship.

Ha Joon’s character is Korean language teacher Do Yeon-woo. An optimist and an idealist, he believes success is a matter of how capable a person is. As such, he doesn’t play the game of buttering up his superiors, he puts his efforts into further developing his skills as an instructor instead. Hearing the words, “you teach well,” makes his heart race and motivates him to be a better teacher.

Aw a drama focused on teachers, with Seo Hyun Jin and Ra Mi Ran? 😍 Count me interested. I haven’t seen the guy in anything except Arthdal, where he had maybe 10 lines.

I adored the teacher storyline and clash of different teaching styles in SCHOOL 2013. I hope we’ll see something of that here, not just teachers struggling against school corruption and pressure from parents (though the latter is a formidable thing, yikes).

Whoaaaaa. I totally did not recognize Ha Joon in Arthdal. Had to look him up. I only remembered him in Radio Romance.

Glad Seo Hyun Jin is taking on a different genre from rom-coms.

@loveblossom,
Whoa! I didn't recognize Ha Joon in ARTHDAL either. He didn't look anything like in his boxing and MMA matches with Jang Hyuk in BAD PAPA for that matter.

I've been wondering when Seo Hyun-jin would be back in Kdramaland. This sounds interesting.

Wow.. a show about teachers and Seo Hyun-jin, count me in, show. I just hope that this time this project is going to be a really good one. I can just remember how struggling it was for me to try to finish Beauty Inside just for the lead actress.

I have been waiting for this!!! After brief rumblings months ago I was scared this had been scrapped. I adore Ra Mi Ran and am excited to see her chemistry with Seo Hyun Jin. SHJ is really good at playing sassy characters, so I think she will mesh well with Ra Mi Ran's badass-ness. Have no strong feelings towards the story as of now, but that could change the closer we get to premiere time.

Seo Hyun Jin, I miss you. As long as it's not somethink like the beauty inside.

I am glad the plot seems to be plausible. Yay for stories without chaebol families, although maybe a few member of such could be a second character??? Ina school environment there is always a rich person's kid... who is unusually a jerk, of course 😂😂😂😂😂

I've been looking forward to Seo Hyun-jin's next project. The subject matter sounds more enticing than THE BEAUTY INSIDE turned out to be. Truth to tell, I'd be even more thrilled if she did another sageuk.

As for Ra Mi-ran, I think that the only drama I've seen her in was THE KING 2HEARTS -- in which she made an impression as the court butler.

Ha Joon completely flew under my radar in ARTHDAL CHRONICLES. But I enjoyed his performances in RADIO ROMANCE and as Jang Hyuk's boxing and MMA nemesis in BAD PAPA. Yeah. Picture those two facing off in the ring/cage. Totally badass.

@pakalanapikake If you haven't seen it, I recommend BUAMDONG REVENGE SOCIAL CLUB for a great performance by Ra Mi Ran. In summary, it's about a group of housewives who hatch revenge plots of the petty kind against their husbands. I think you'd enjoy it, and it's only 12 episodes long. She's joined by two ladies you will recognise from sageuks: Lee Yo-won (Queen Seon Deok) and Myung Se-bin (Su Baek Hyang's mother!)

Ra Mi Ran also made quite an impression on me as the tiger-print-wearing ajumma from REPLY 1988 who bossed the men of the house around. That's where I first saw her.

Thank you so much for your recommendation of BUAMDONG REVENGE SOCIAL CLUB and mention of cast pegged to my sageuk tendencies. You most definitely have my number. I loved Myung Se-bin as Chae-hwa in THE KING'S DAUGHTER, SOO BAEK HYANG, and Lee Yo-won from 49 DAYS (with Scheduler!). I vaguely recall it as being popular with Beanies, but I got turned off by the revenge implications, and probably had a full viewing schedule anyway. Now I think I'd enjoy it after watching major revenge unfold in MAWANG and SLINGSHOT. Petty revenge sounds like fun. And at 12 episodes, it's not a huge investment in time. ;-)

@pakalanapikake No problem, I hope you enjoy it! I was also initially turned off by the revenge implications, but it was entirely different to what I expected. It's an easy binge-watch.

sometimes drama summaries are so vaague. what kind of private school is this? idk how the school systems work over there tbh so...does that mean these kids are super wealthy or? if so, they need to make it very compelling. ra mi ran is so beautiful omg *_*

The cast alone will get me to look. As for Ha Joon, I had to look him up, that was crazy.

Although I was excited to see Seo Hyun-jin and Ra Mi-ran comeback I wasn't really interested in the drama because I never looked into what it was about, and I should have! because it sounds so interesting. I love that this time we can focus on the teachers (although I do love my school dramas focusing on students) and that reminds me of School 2013 which had an equal focus on students and teachers. There's definitely going to be some struggle for our main 3 as they are teaching at a private school but I just hope they won't focus too much on school corruption because that always takes away from a good school drama

OMG SEO HYUNJIN AS A TEACHER AND A MENTEE TO RA MIRAN????? OH MY GOOOODDD

Seo Hyun Jin is so pretty. I fell in love with her in the Beauty Inside.