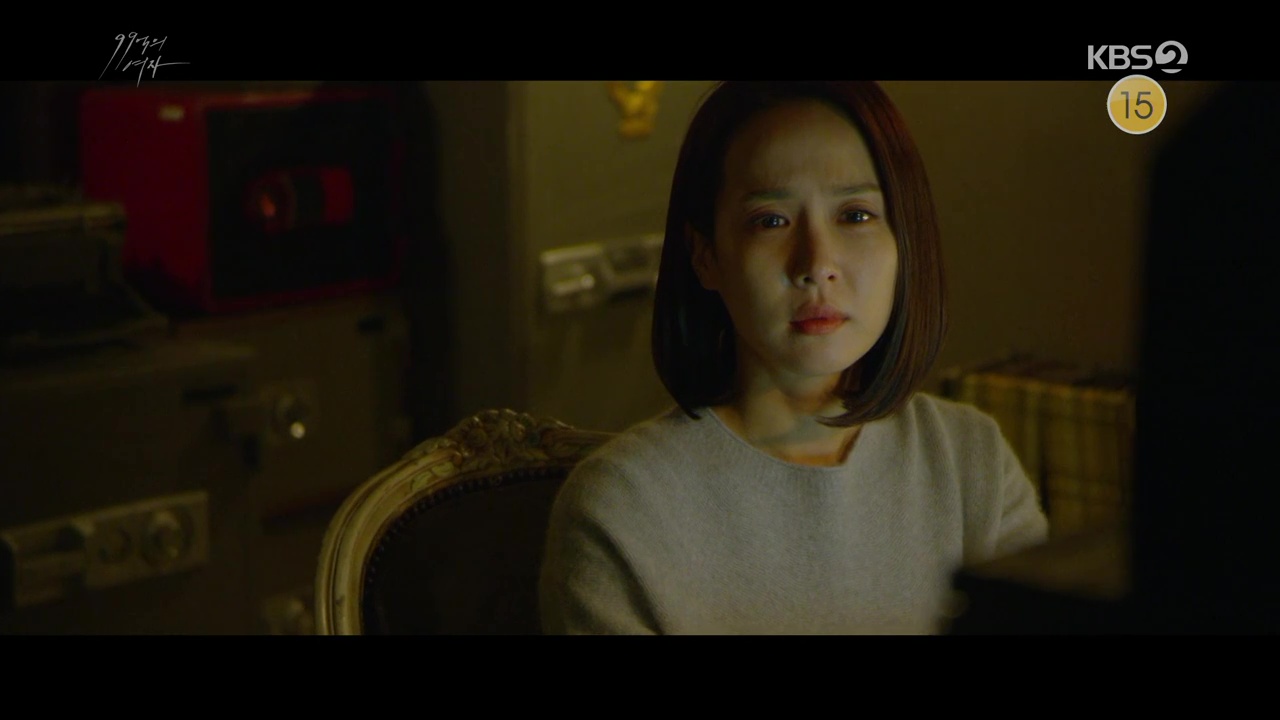 Our heroine finally changes her course, giving up on the tainted 9.9 billion won in exchange for earning the money herself — little does she know she’s become part of an elaborate and well-laid plan to take down everyone involved with the massive fraud case three years ago. Though our heroine has come a long way, she’s still unable to move forward (or to Tahiti) without the money. Whether that’s greed or gumption is yet to be decided. 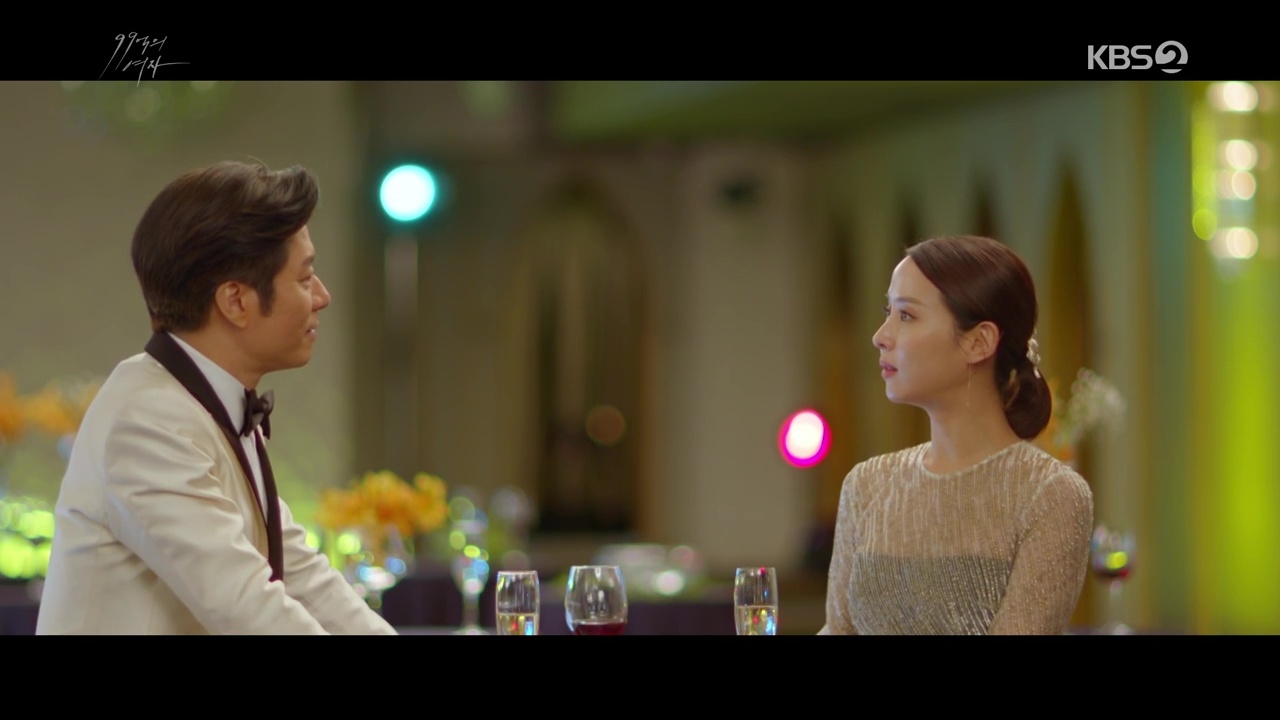 It’s the penultimate week and 9.9 Billion Won Woman doesn’t quit! The story has reversed from being about the pursuit of the money, to a pursuit of the people around the money, both from present day, and three years in the past when it all started.

Leon burst on the scene and he has pretty much taken over as the maestro behind everything that has happened, is happening, and will happen. Leon (masquerading as Daniel Kim) takes a liking to Seo-yeon, or at least pretends to, and takes her under his billionaire wings. He’s toying with her role in the whole thing, for sure, but a part of me thinks he’s also genuinely intrigued by her. 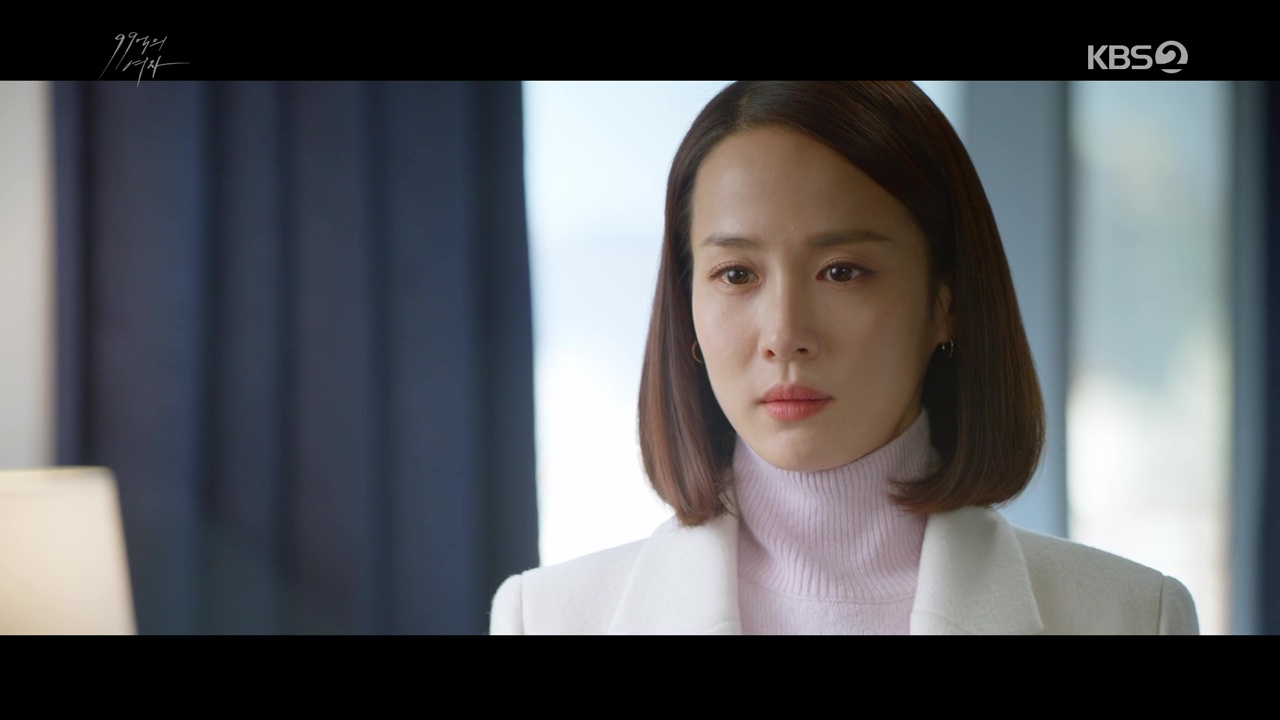 Seo-yeon gets control of a huge sum of Leon’s money to “practice” her investing skills. It’s interesting that through this whole ordeal around the 9.9 billion, Seo-yeon has unearthed a skill she didn’t know she had: managing money.

Between the prodding and tutelage of Grandma Jang, and the leg-up from Leon, Seo-yeon has a whole new path in front of her, and her firm as hell but soft-spoken nature seems the perfect balance for her success. Now, if she could just get there! 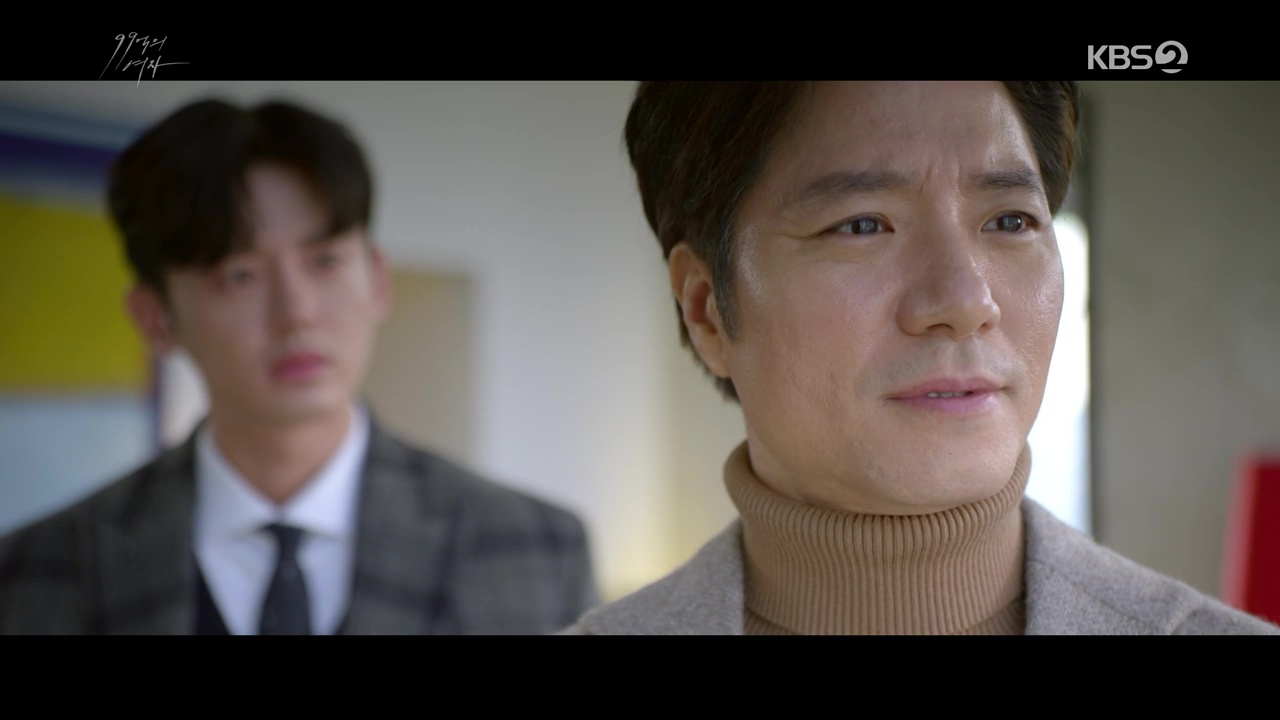 Leon has ulterior motives, but it’s also interesting to watch him prod her along. He warns Seo-yeon she has to decide between chasing men or money — and in an amazing bit of writing, she turns around and tells him, “I really made that decision the night I saved you.” Boom! That night, Seo-yeon saved him rather than go after the 9.9 billion won — she knows it, and he knows it, but she doesn’t have a clue that he knows it. Either way, it’s an epic moment.

Saving a life versus chasing money continues to be a thread woven through this drama, and I love the change we have witnessed in Seo-yeon, since saving a life (rather than chasing money) is exactly what she didn’t do at the start of the drama, when Tae-woo’s little brother was dying. 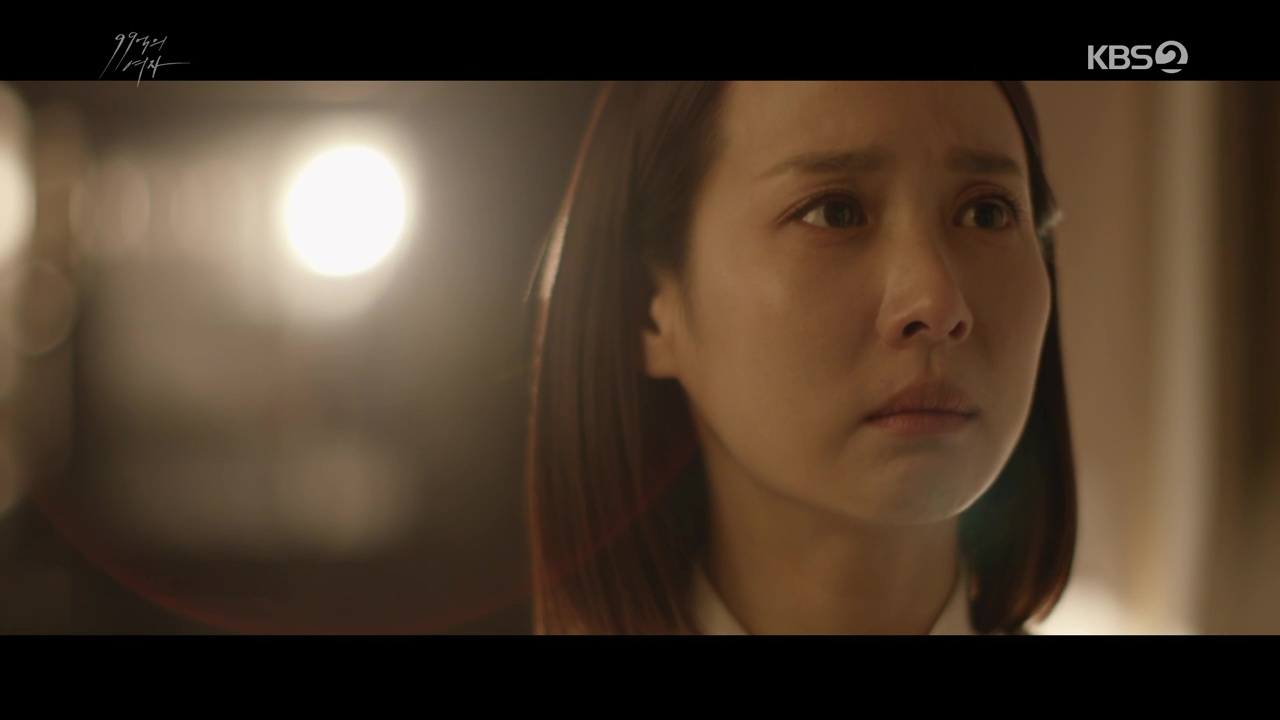 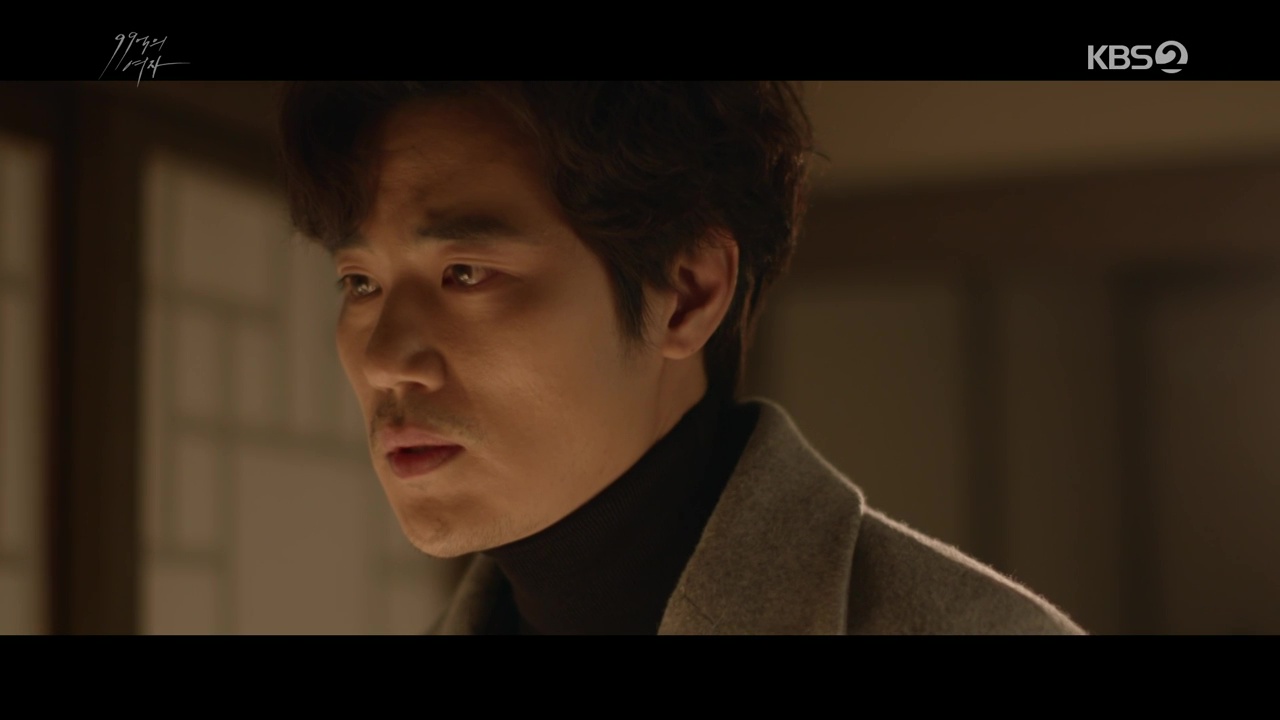 Speaking of, it’s finally time for the moment we’ve all been dreading: when Tae-woo learns about his little brother’s last moments. This scene was every bit as painful as expected, but a hundred times more impactful because of the many emotional shifts.

It starts with this beautiful, breathless meeting of Seo-yeon and Tae-woo. As ever, the energy between them is palpable, and Kim Kang-woo’s acting here is amazing. He awkwardly explains that he also bought a ticket to Tahiti and then he flat-out asks her to run away with him.

As amazing a prospect as this sounds (because I was swooning), Seo-yeon can’t bring herself to go, and the scene quickly switches into her telling Tae-woo about the night his little brother died. And, just as expected, it’s like an iron curtain goes up between them. Words are not enough to describe how great this scene was. 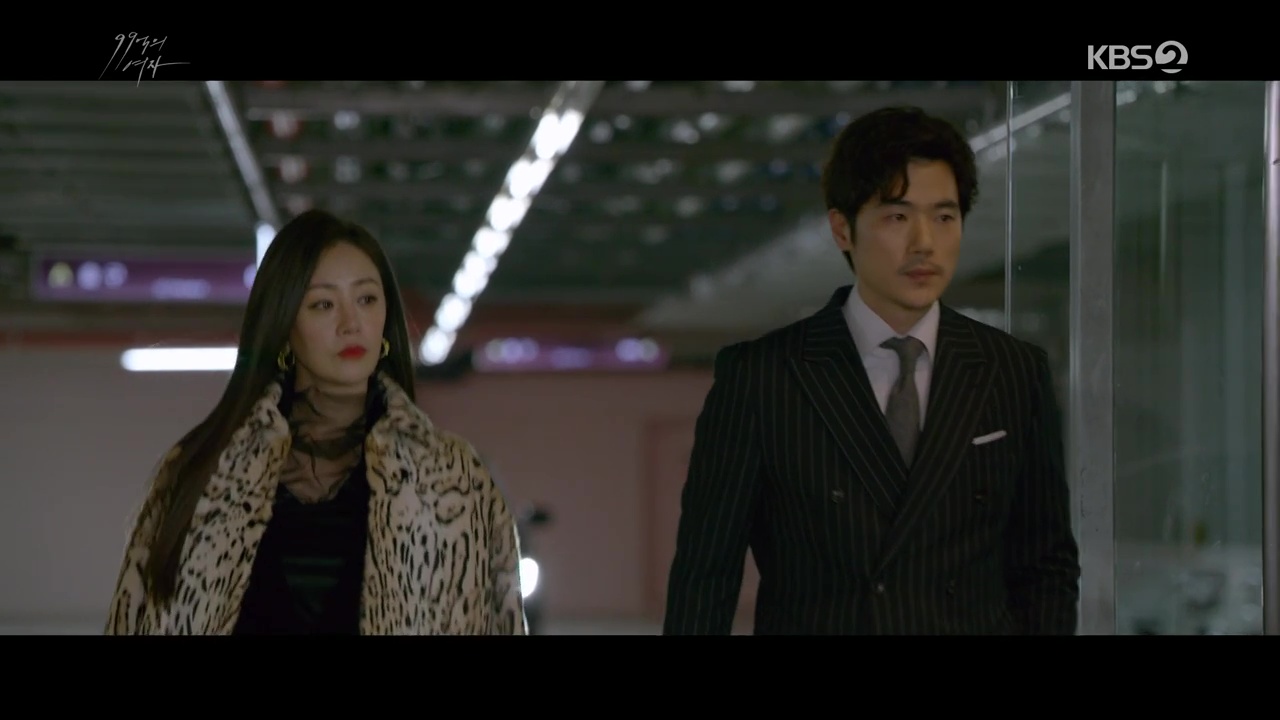 In the midst of all of those emotions, there’s a whole lot more gameplay, intrigue, and reversals this week. In-pyo digs himself out of his grave like an orc from The Lord of the Rings and lives on to torment everyone. Jae-hoon tries to prove himself to Hee-joo, but she’s beastly to him, and instead he’s utterly used by Leon. Hee-joo joins forces with Tae-woo to beat Leon — they’re both convinced he’s alive, and the attack on her foundation is the proof. Finally, Seo-yeon gets a bit of revenge (and money) when she secretly provides a loan to Hee-joo that she desperately needs.

The ground that this drama has covered from its start is rather fantastic, and it’s still going strong. I don’t know if it’s too much to ask for my happy ending with Seo-yeon and Tae-woo frolicking on the proverbial shores of Tahiti — but if I can’t have that, can they at least be on the same side again before the story ends? 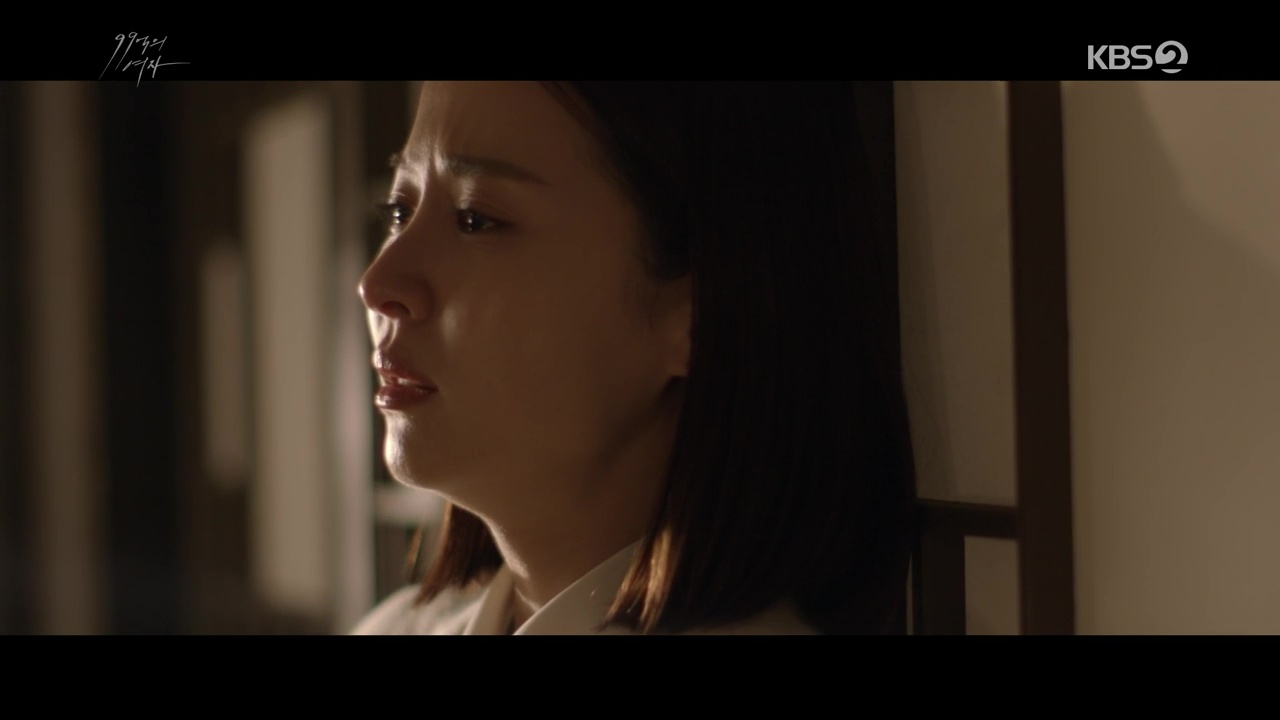 I was wondering if it was going to come out, and boy did it. Whew. One of the things I really enjoy about Seo Yeon as a character is that she never unnecessarily cries, she sheds her tears and says onwards and upwards. She has a specific goal in mind and has laser focus, which both benefits and harms her. She is such a morally gray character and I love her. Her husband on the other hand is apparently the terminator or a roach, probably the latter. Talk about never say die🥵😱😱😱

Why would Seo-Yeon tell him about his brother? I am still on ep 8 because I thought the twists were becoming too silly and characters not believable anymore.

Money is still the driving force behind all the characters actions. Being naive and lacking common sense makes one an easy pawn for the greediest villains.

ahh what a great drama this is pace, editing, cinematography esp all the skewed frames. I am loving it for being so visually interesting.
And never die attitude of JSY is such a show stopper.. like every time she is on the brink of being emotional melt down her expressions are so unflinched...she is the one of the strongest female lead i hav seen a kdrama. and i am not hoping for a happy ending but still keeping my fingers crossed that at least JSY will get some happiness after all the traumatic life experience

My excitment for the show has been decreasing the past few weeks and now I've decided to skip this weeks' episodes, I'll either bing watch the last four episodes together or just follow the recaps.

I’m glad Seo Yeon has moved on from the old money and she seems to have found a purpose. Helping Grandma Jang with her surgery & medications and learning to invest. Perhaps joining the financial world.

Hee Joo’s and Jae Hoon’s relationship has become more interesting as we head towards the ending. He’s terrible and has ton of faults, but his love for Hee Joo has become strong. She loves him too. They have problems they need to work on in order to save their relationship, but he looks like the type that will sacrifice his life for her in the end.