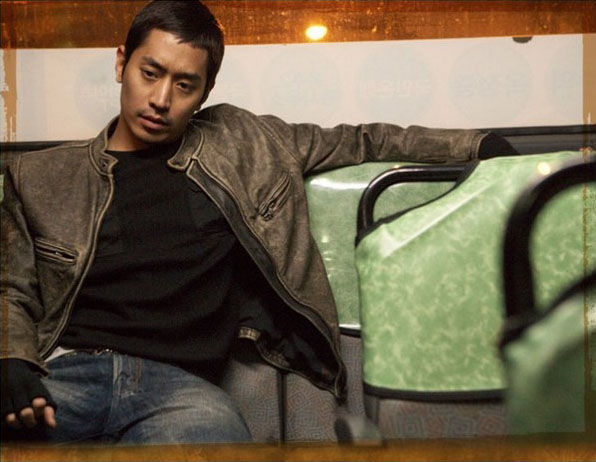 Eric will be enlisting for his mandatory military service by September of this year, but first he’ll eke out one more project — a sageuk drama.

According to his management, Eric felt a strong pull to the script — a “comedic heroic sageuk” already drawing cursory comparisons to Hong Gil Dong — and is currently in preparations for the part. The series, KBS2’s Monday-Tuesday drama Choi Kang Chil Woo (a pun on the character’s name also meaning “strongest Chil Woo” or “Chil Woo the best”), will be directed by PD Park Man Young (Vineyard Man) and premieres on June 9. The story places him in Joseon times as the titular Kang Chil Woo, an ordinary and lower-tier government official by day, and secret kickass assassin by night.

I’ve always thought Eric looked completely modern, so I’m curious to see how well he dons traditional garb and acts in a historical drama. Then again, the plot and description sounds like it’s not going to be sticking too closely to conventional sageuk structure, so maybe his modern looks will fit right in.

His last acting role was in last year’s Que Sera Sera, after which he took a break from acting and resumed activities with Shinhwa. Speaking of whom, Shinhwa gives their tenth-anniversary concert(s) in Seoul on the 29th and 30th.

plot sounds interesting!
can't wait to see eric in another drama [and curiously a sageuk one!] before enlisting for MS..

I'd have a prefer a modern one..but good luck to him on this project. They're all going away soon. :/

I prefer Eric in a modern drama but the Kang Chil Woo's character sounds very interesting. He will be one handsome, top nod assassin!

Can't wait to find out who is the lead actress

I know this has nothing to do with this post but I was noticing your "users currently online" count. =D it's so cool. i was on it for like 10 minutes to see who's on wht xD

Woohh... I'm excited..
Eric can definitely pull the badass assassin role for sure.. but in an ancient drama? hmmmm...

Really looking forward to this...

"Comedic heroic sageuk".........now..that's something I didn't expect Eric to be in...I will have to wait to see how this turns out because I cannot imagine Eric in traditional garb. I think the only time I've seen him in traditional attire was during his Shinhwa days for Chuseok.

Eric isn't a bad person for me to watch, so I'll be looking out for more news. Depends on the actress though......Comedic heroic sageuk...Sounds similar to HGD. Put what with HGD's success (online and overseas perhaps. XD) and that most people probably know what to expect by now, I'm thinking it'll do better if it's quality stuff.

If Ju Jin-Mo can look good in a sageuk drama, then Eric will look fantastic! I think he'll do very well with this character. Looking forward to seeing this one!

Ahaha, my anti-sageuk stance has to change, then. Only for Eric.

I must admit, I did not expect him to take on a saeguk, albeit a more modern saeguk. I thought he would continue along a more 'intense' drama. But I guess with so many saeguk dramas lately, he would run into them one way or another. His character sounds interesting too, being extremely different at day and night. I suspect that there's gonna be a wee bit of Kang Ho (SR) in it, and pardon me, but I'm just so excited to see Adorkable Eric again.

WOW..i find his choice for his next drama completely unexpected....the last thing i pictured Eric in was a Historical drama, but the plot sounds interesting...he is going to make one HOT badass assassin ...and since this is going to be a comedy, i am really looking forward to seeing Eric act like a dork...he is so freaking adorable when he acts that way lol...

i'm looking forward to this!...isn't that around the same time Lee Jun Ki's Iljimae will come out?

Wow, Eric kinda looks like Ludacris in that pic

I remember in Supper Rookie, there was a scene Eric, Oh Ji Ho and Han Ga In were in period costume. He looked good then!

lol @ belleza! :D girlfriend.. you crack me up every time i read your comments.. i bet you watch BET... i love eric! he's so cool but he seems so sweet too.. he's so dedicated to shinhwa.. & really good in his dramas! he was awesome in que sera sera.. i'm gonna be all over this one!

>.> makes me wonder if the draw had anything to do with the 30 billion won per episode he is getting paid...

i wish the lead actress is yoon eun hye~!
really2 want 2 see them act together!!
dunno y but they look so perfect~hehe
but well...anyone can be...
just can't wait to see eric..