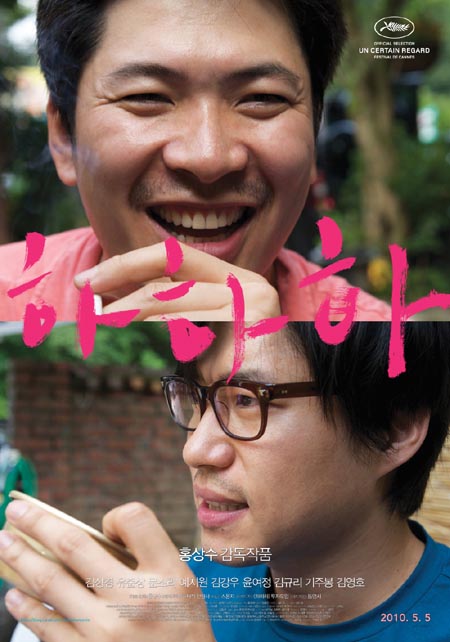 Although most of the attention regarding Korean films at Cannes International Film Festival has been given to The Housemaid and Poetry, a third Korean entry, Ha Ha Ha, has won the top prize in the Un Certain Regard competition. Second place (the jury prize) went to Peruvian film Octubre.

Un Certain Regard is one of the competitive categories that awards young and/or innovative talent. Cannes’ top honor, the Palme d’Or, has yet to be awarded and will be announced tomorrow, along with the director, screenplay, and acting prizes. (Both Poetry and The Housemaid are eligible there.)

Ha Ha Ha is directed by Hong Sang-soo and is his sixth entry at Cannes, and his first prize-winner. Previous entrants were The Power of Kangwon Province in 1998, Virgin Stripped Bare by Her Bachelors in 2000, Woman Is the Future of Man in 2004, Tale of Cinema in 2005, and Like You Know It All at last year’s festival.

The film unfolds as an aspiring filmmaker who decides to move to Canada (played by Kim Sang-kyung, currently in the drama My Country Calls) reminisces with a film critic he’d met while on a trip (Yoo Joon-sang). The movie also stars Yeh Ji-won (Daytime Drinking) and Moon So-ri (of Forever the Moment, who coincidentally also appears in The Housemaid).

I'm peruvian and a consumated k-addicted .... you don't know how happy I'm now!!!

is nice to see winning an own film and a korean film!

thank you so much javabeans!

That's great! Oh, and I didn't know Poetry and The Housemaid were up for the Palm d'Or- that's also great, although the chances are slim to none.

On a side note, might I say I'm enjoying the hell out of My Country Calls? It's hilarious.

I'm really happy about this award... and also for the second place for the peruvian movie Octubre... YEIIIIII!!!! these two are going to my "must watch" list!

ps: guess you figured out i'm from Peru =D.hehehe

wow!! i'm always happy when something asian-related gets recognized internationally!!
thanks for the good news!

I am happy for HSS. What I love about his films is his female characters are always cool. I really feel he loves and respects women.

I am rooting for Apichatpong Weerasethkul from Thailand for the Palme.

I have to disagree with that.
I'm really into cinema and my main sources of information are French media and critics. So I know that Korean movies have been receiving a fair amount of press in recent years. In fact, Korean movie directors such as Hong Sang Soo, Im Sang soo, Lee Chan Dong etc. are quite acclaimed in France (and worldwide). Yang Ik Joon's first movie "Breathless" (Ddongpari) which opened in France a few weeks ago has received a lot of good press. Same for Hong Sang Soo's recent "Mother".

Back to the topic, I'm really glad this movie won the prize. Though I doubt the Housemaid will win anything tomorrow, I have high hopes for Poetry.

The reporter Han Sunhee tweets about Kim Dong-ho (big behind the scenes guy, runs PIFF) possibly helping this award, from his juror's vantage.
I had wondered this too, when last year's Cannes had Huppert supporting Haneke (for winning the Palme d'Or), Lee Chang-dong possibly rallying for Thirst (which shared 3rd place with Fish Tank.) You know, sort of an Everybody goes home happy:)
Director Hong's really not getting support from homebase audience, so putting out quality in very meager conditions (the actors fund the movie themselves!) deserves some award patronage.
Here's hoping Ko Hyun-jung works with him again. She was one of his best female characters ever. Her popularity has skyrocketed since then, so it's win-win for both. Let's throw in Jeon Do-yeon too, since she's running out of auteurs to work with at home :D

@11
I understand what you mean . korean movies are recognized by people who are like we say in france "cinéphile". A lot of people doesn't know that those movies exist. even "thirst" was almost not mentionned in TV in France. "Mother" was more famous but we can't see the movie in all the big cities. That's what i mean when i say we don't talk about those movies

@2: You're wrong, Poetry was heavely commented on each TV show about cinema, they said the actress was excellent and even better than Jeon Do-yeong in Secret Sunshine.