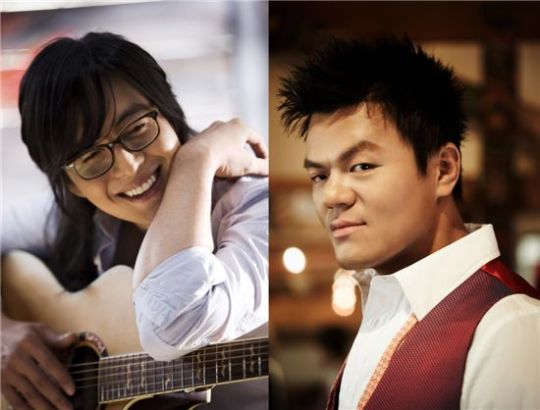 Dream High is the name of a drama project that has been in the works for a while now, and after stalling a bit in the planning stages, it is finally now a go for KBS. The project drew some early buzz for the big names behind its production, namely Keyeast (Bae Yong-joon‘s company), JYP Entertainment (Park Jin-young‘s company), and CJ Media.

The drama takes place at an arts high school and features students pursuing dancing, singing, and acting. Not terribly unlike the university-based What’s Up or, to a lesser extent, The Musical. I wouldn’t say that all these dramas are copying each other because they’ve all been in planning for so long — and they’re hardly the first that take this theme — but I do think there’s something of a zeitgeist factor that has them all coming out in the same season. It’ll be interesting to see how they compare with each other.

According to the chief of KBS’s drama department, they decided in a meeting to air Dream High at the end of the year or early next year. Next up, they’ll be holding open auditions and heading into production. The drama plans to cast both actors and idol-group members, as well as new faces.

Woot, first comment. Hmmm, never heard of the drama till now, but i'll try and keep a look out for it.

BYJ is very professional , likely this is a good drama .

I haven't heard of this drama til now either, not sure if I'm particularly interested in seeing this one until I learn more information.

Also, I find it really interesting that it seems that similarly themed dramas tend to come out all at the same time. For instance you had all those Iljimae themed dramas last year, and also there were all those sageuks that featured a strong female as the lead, and more. Now it seems the flavor of the season is musically themed dramas.

like i said before... this is the Idols' era. Idols are invading the drama's world.
Not too sure I'm gonna like it -- I do fangirling over some idols -- but I really want they have some kind different worlds, and only meet on talk / variety shows.
Some idol kpoppers are indeed talented enough to do acting, but I really don't like the idea that producers using them to get high viewership's rating only .

Actually I really like the premise of Dream High and really anticipating What's Up.
Hope the open audition will bring new talents. And no, please Keyeast, don't use Kim Hyun Joong again for this...unless he's able to proof himself in Playful Kiss first....
( Keyeast seems want to 'exploit' him, IMO )

I like the idea to cast new faces. This more promising than the usual familiar faces in acting biz. Well, well. Seems that the name behind all this are both humongous, I kinda want to see how it turn out later.

javabeans you gave me a heart attack because i thought JYP was one of the ACTORS omg lol.

hmmm this drama looks interesting with BYJ behind the scenes

ok so i admit i'm a jyp hater... and i'm just gonna say it... jyp looks like he was either hit by a hammer when he was a baby or he was meant to be a gorilla

I like this drama whatever it is and I hope it beat up The musical. I just can't stand GHS =.=

I could only agree with all the posters so far. Similar themed dramas almost always come out at the same time. The most I'm keen on amongst these three dramas though is What's Up. But it seems to be getting the least attention and no TV network has picked it up yet the last I heard.

I remember this...it's been a long time. Glad to see it happening!

Remember this too...I thought all this themed drama may be of the popularity of the US series such as High School Musical( or similar) or Glee?

I don't know about each (Korean) one in particular but the name 'Dream High' seems promising to me. I mean by just looking at the name, this one stands out.

I read about this loong time ago from both of them. When I know HJ choose Keyeast, I thought he will be in this drama. But now, he already got Playful Kiss, so I guess idols from JYP team?

sounds interesting, but i don't like the idea of hiring idols, there are a lot of annoying idols that probably suck at acting. i'm not a fan of BYJ & JYP, i don't get them, also JYP seems to focused on so many things, i feel like he wasted the Wonder Girls' time for the last 2 years, with their American debut/tour also his other groups joined them and they spoke and sang in Korean. sorry just had to rant.

I adore musicals and everything about dancingq acting and seeing how things hapen before final movie, screenplay or concerto is ready for release. Preparing for entertainers is a proces very interasting for me.
I and have noticed for myself that even i start to watc because of an idolor someone I like in the cast it allways finished that I keep watching because of a story. So wHat's wrong if all stars act in this\. That is what they do for a living. And most of all when they are stars their talents a re proofed.
Go ahead with the production I believe it would be a hit.

Who cares about this crap? BYJ needs to get a drama or a movie and be an actor like he's supposed to.

i have yet to see the finish product before i'll say something.hopefully it would be entertaining.what i'm looking forward to is BYJ next drama.he's been amiss for 3 yrs .hope he'll do one asap.