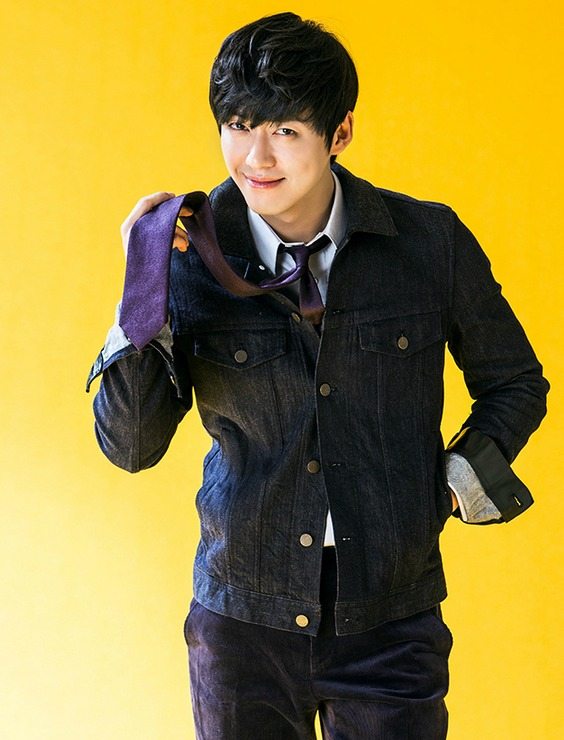 With all the other potential Hong Gil-dongs squared away (Ji Sung seems on the verge of signing on to Defendant, while Yoon Kyun-sang has snatched up the lead in Rebel Hong Gil-dong), I had wondered about Namgoong Min (Beautiful Gong Shim), but it looks like he might be headlining a drama of his own (Woot!), where he gets to play an oddball (Double woot!). He’s currently considering the new KBS workplace human comedy Chief Kim, the latest project from writer Park Jae-bum of Good Doctor, Blood, and God’s Quiz.

The warm human comedy is about an eccentric middle manager who sticks up for the downtrodden employees at his company, and fights for their fundamental rights. Namgoong Min has been offered the title character, a former accountant who takes a middle management position at an ordinary company. He’s an odd duck, described as totally normal on the outside but sunny and eccentric on the inside. His actions and words always make it seem as if he’s joking, but he doesn’t care what other people think and he acts according to his principles, with no fear of those more powerful than himself.

The character appears to be mischievous and childish, but he’s a rule-follower with strict principles, a strong will, lots of pride, and guts to boot. He has a big heart and perceives everything around him, which is obviously how he comes to stand up for the little guy at his company when push comes to shove.

After Beautiful Gong Shim, where Namgoong Min turned the weirdness dial up to eleven, I have no doubt that he’d be perfect casting for this role. I was excited about Cha Tae-hyun considering the drama early on, but to be honest I like this idea better. Cha Tae-hyun would turn Chief Kim into a funny everyman, but Namgoong Min would make him a true eccentric, and that alone would make me watch this drama. Fingers crossed that he signs on!

Chief Kim will be directed by PD Lee Jae-hoon of Jung Do-jeon and Page Turner, and is scheduled to follow Oh My Geum-bi on Wednesdays and Thursdays in January.

Via IS Plus, Sports Chosun

this is a good news and I really loves that pictured, I really liked yellow sk big thanks
(*˘︶˘*).｡.:*♡

I watched Blood and, Uhm, well they were going for something interesting, not sure where it went wrong. Perhaps the protagonist's personality?

I didn't watch Good Doctor or God's Quiz. Maybe the writer's Forte' is outside the hospital?

I actually think the style of Blood will work for this kind of plot, and I've heard good things about God's Quiz. No clue about Good Doctor, although I think the premise is fascinating.

I'd say this writer is okay. They're hit or miss. God's Quiz is good (though season 4 fell off near the end). Good Doctor was okay. It could have been better, but it's still decent. Blood was amusing, but I wouldn't recommend it.

I tried watching both good doctor & blood which I dropped after ep 3... so that sinks my excitement... well I would still like an office underdog ahn dan te ...

Yeah...not thrilled either with this writer. Haven't seen Quiz, but have heard good things. Doctor lost its way for me and was way too long. Blood was just awful. And I'm not crazy about NGM playing the same character over again. Especially if this is going to fall into the slapstick silliness range.

I watched Blood and I liked it. I don't pick apart plot lines or whatever. The lead actors have great chemistry together. Ahn Jae Hyun and Gu Hye Sun are now married in real life.Just watch it and root for the characters.

OMG!!! YASSS! Please accept it oppa +...+
I wasn't expecting much of this drama but with him I'm sure it would bring in another light :D

Yasss!
The plot looks so good and funny and if He is the lead role that will be AWESOME! I hope he accepts this! I'm missing him on kdramaland :(

It will fight against 'Saimdang'..

The role reminds me of Mr. Oh in Misaeng. :)

OK I don't mind as long as I can get to see more of oppa? please just please, good female lead. I am a little anxious nowadays with the casting news ?? if it must be an idol, please someone like Eunji for the female lead. PRAYING HARD.

oh i so want to see him again on my screen! he always makes the characters his own and infuses them with depth. and i agree, please get someone good that can act alongside him and make them both better.

On a more serious note, I'm already in love with (t)his character! I can totally see him rock this role. Namgoong Min is just so good–at being bad AND being good!

I might be the only one that's not so excited about this news ._. First of all, I'm not too sure about Blood's writer. Even Good Doctor waned off towards the second half imo. And the character sounds too much like Ahn Dan-tae. I like him as a quirky character. But maybe a different kind of quirky. Was excited for Hong Gil-dong, but i don't think he'll be doing it already.

The main character is such a perfect fit for him! I have no doubts that he'll pull it off well~

But seriously. Please accept it, NGM. I loved you in Beautiful Gong Shim, I want more goofy you!

This character will fit Namgoong Min perfectly! After BGS, I said I wanted him to do more quirky, weird characters because he did such an awesome job. I hope he signs on!

I was hoping he'd do Rebel Hong Gil-dong, but this is not bad either. Glad to know he gets good offers nonstop.

NM will do amazing in this role if he signs on. Him being quirky is so fun and charismatic.

It could just be me thinking this but doesn't the plot sound so much like 'The Office'? Essentially, Chief Kim is the Korean version of Michael Scott/David Brent.

Either way, It's got Namgoong Min. I have no doubt it'll be interesting.

The description of the character seems to be complex but NGM is such a good actor that he would fit into it perfectly.

YAY for Namgoong Min!! I love this guy. I sure hope he accepts. I will be watching for sure.

Just stay away from ABBA songs, and I think we'll all live. ?

The character and story do sound interesting, I have to admit

The writer of good doctor is the same as the one who write blood haha ??

If it's Namgoong Min it sure will be a different kind of "Quirky" !!!
I'm sure he doesn't like to repeat himself in every project.
But the question is, aren't they too late for picking actors? Since the ongoing drama is in its second week almost. also haven't watched the writers previous works but about Blood, people love it, people hate it. The plot sounds so interesting and cool .. I hope they'll work hard on it and just wouldn't be a simple comedy drama.