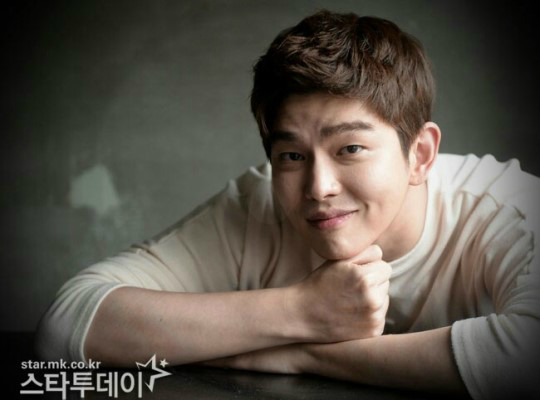 This is only a slight possibility, but there’s talk of Yoon Kyun-sang (Doctors, Six Flying Dragons) being offered the leading role in MBC’s new fusion sageuk Rebel Hong Gil-dong. Yoon reportedly took a meeting with PD Kim Jin-man (Kill Me, Heal Me) about the drama, but when news broke that he was offered the title role—MBC said he was considering the part of Hong Gil-dong—Yoon’s reps issued a statement saying that there have been no official offers yet. So… what’s it going to take to make it official?

It’s not clear who’s officially out of the running, but offers have been given to Namgoong Min (Beautiful Gong Shim) and Ji Sung (Entertainer), and Yoon Kyun-sang is the third name to pop up in the mix for the leading role. There’s a chance that any number of them will be cast in supporting roles instead (I wouldn’t mind all three of them in one drama, if I’m being greedy), but I do remember this sort of thing happening with this PD’s last drama Kill Me, Heal Me, over the course of multiple casting rounds with potential actors, so maybe he’s just really picky about his leads.

Rebel Hong Gil-dong will be a fusion sageuk that retells the story of famous Joseon folk hero Hong Gil-dong. Set during the reign of tyrannical king Yeonsangun, the drama will portray Hong Gil-dong as a revolutionary activist who fights for the people against the social class system.

Kim Sang-joong (Jingbirok, Bad Guys) is considering the role of Hong Gil-dong’s father, a nobleman who never acknowledged his illegitimate son, and was the root of Hong Gil-dong’s famous line about being unable to call his father his father and his brother his brother. Honey Lee (Come Back, Ajusshi) is up to play the king’s consort Jang No-suk, a famous historical femme fatale who was the only confidante to a mad king. In the drama she’ll be torn between the king and her first love whom she never forgot, Hong Gil-dong.

If Yoon Kyun-sang does get cast, it will be his first starring role four years after his debut (as one of the Woodalchi warriors in Faith). But he’s done well with supporting characters and had a high-profile role in SBS’s Six Flying Dragons, so I wouldn’t be surprised if he nabbed a leading part at this point. On top of his recent drama successes, he’s also bromancing it up with Eric and Seo-jinnie on Three Meals a Day, which of course only makes me like him more. I don’t know about the rebel part, but I can see Yoon Kyun-sang fitting the hero image to a tee.

Rebel Hong Gil-dong is scheduled to follow Night Light (which comes after Woman With a Suitcase) on Mondays and Tuesdays in January.

he was good as mo hyul ... he has commanding aura
but kyunsangie on variety is another story, started with running man and now 3MAD, i do love his character. so cute and hard working..
seriously, 3MAD made me go crazy over him and his cats hehe

Word. He was amazing in 6FD. I still remember the last episode where he shouted "Muuuuuuuuuusaaaaaaaa!!" Gave me chills.

Love him in Three Meals A Day and his closeness with Eric. They both are sweet guys. Goodluck for new drama.

Namgoong Min, Ji Sung, and Yoon Kyun Sang seem like really different choices all to be up for the same role. I'm having trouble understanding the PD's line of thought...

Exactly. I like them all, but they're wildly different actors. The show could be completely different depending on who takes the lead role. I would personally love to see Namgoong Min do it, but at this point I'm just head scratching. Eh, we'll see what happens...

It means he doesn't have anything concrete and changes according to whatever production team thinks should be good match so I hope he passes.

They do have a similarity in their last drama roles: kinda goofy and endearing nice guys with a hidden strength?

Oups, I totally forgot the YKS last role was in Doctors, not 6FD. Hehe~ sorry

I thought nobody wanted to take his previous project, Kill Me Heal Me, and along came Ji Sung which turn it into endearing drama and rating stealer.

Am not familiar with him but his haircut in that top pic reminds me of Lee Sang Yoon's current look on OTWTTA. Its a nice look that makes them look boyish and manly at the same time, not the all famous bowl cut.
Speaking of which, has there being any females in dramaland who have rocked the bowl cut? I usually see it on males.

Honestly, he was one of the best things about Doctors, and I do remember him in Faith, which he was also good in, and a real scene-stealer for me. I would love it if he were cast as the lead in this, or really, any, drama. His star is rising, and I'm loving it!

I love him in Pinocchio, tragic handsome.

Hope he takes the lead...Adored him in Six Dragons and Doctors...hope the story is good

Welllll
I don't think he looks good for the role! I hope he's not greedy for a lead role .. Hope he'll play a better character that fits him better on another drama as the lead actor.
Out of these two guys, NGM and Ji sung, Namgoong Min looks better for the role. But looks like he has turned it down and Ji sung has another drama to consider. The plot is not my favorite and I'll only watch it if I like the leads. So let's see what happens

Yes, take this, take this! And maybe you can be hyung-not-hyung to LJS again, lol.

I really want to know who's finally interested in playing as Hong Gil Dong !! Great actors turned it down ?

Ha ! I am currently watching him in 6 flying dragons, I am sure he would do great as HGD !!! But I think we will may be have to add a H to HGD for Huge Hong Gil Dong, that's one huge baby right here !!!!

Huge? What do you mean?

He is big and tall.

I think something like 6'2", taller than Lee Jong-seok. Really tall...

It's kind of amazing that they managed to find a guy even taller than him to play his hyung.

If I'm not wrong, Kim Young Kwang is also as tall as Yoon Kyun Sang....

So very few who can do sageuk properly but then no one is even trying to make a good and proper sageuk these days. Before we get to the cringe worthy idol territory I'd take him.
I'm fine with Honey Lee stealing the show lol. Kim Sang-joong can carry the first half.

Haha laughing at your first sentence? But yes let's give Honey Lee to steal the show because she Is capable to do so. Another female lead that I'll be fangirling.

Now I will eating popcorn while waiting who is the male lead. Just hope no inexperienced and talentless idol or actor because Honey Lee at least deserve some good partner.

I admit am not much of a fan but thats because i've only seen him in two projects:
Gu Family Book( where he didn't have a prominent loveline so, don't know how he fairs)
A Warewolf Boy( where he played a super smarmy role which is the one i always associate his face with. I'm open to changing my mind.

How on earth this end up here? This was @Sojuboy about YYS

I didn't think she could do sageuks and I didn't like her character in the beginning of SogC but she proved me wrong.
She can definitely stand out here as the leading lady.

First saw him in Faith and have enjoyed him ever since. Hope he plays HGD.

this guy is not lead material, he's face is strange for some reason.

YES TO YOON KYUN SANG OR JI SUNG. Nooooo to Namgoong Min. that man leaves me cold every time. I legit wont watch it if he's the lead. it's that bad for me. and this sounds pretty interesting otherwise so here's hoping for a lead I like even if its not JS or YKS.

Wow. I got too excited but I guess I have to calm down.

He's so cute. He's got that lost puppy look even though he's a big hulk of a guy.

Who I need to sacrifice so this becomes reality???

I wouldn't wish this on Han Ye-ri. I hope she'd do more films or stick with jTBC with good writers like Park Yeon-sun.
I love Age of Youth. It's almost rare to watch a show because it's good and not just riding it for your bias.

If this works out, glad that he's working his way to becoming lead material. Loved him in Pinocchio! Hyungggg!

yep, I've been a little in love with him ever since Pinocchio - what a dark horse he was there.

I hope this works out and they find him a good leading lady too.

I think Honey Lee will be the leading lady. Or she is yet to confirm?

Would be keeping an eye on this show to see who will be part of the final cast. I quite like YKS, so I wouldn't mind him being lead.

I thought there is a new drama for Namgoong min ?

I hope YKS bagged the role. He nailed all his supporting lead role and I bet he can do better as a main lead..So happy for him..