Pretty warrior problems in new teasers and stills for Hwarang 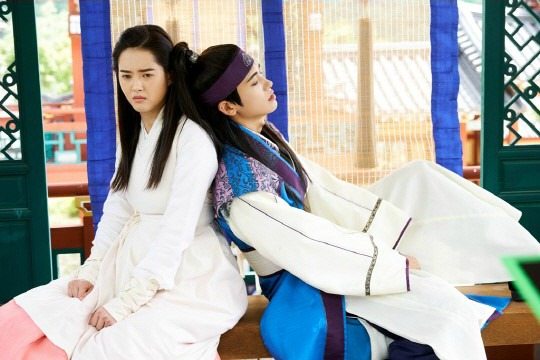 More pretty boys (and girl!) coming your way. We’ve got couple stills of Go Ara (You’re All Surrounded) and Park Hyung-shik (High Society), along with new teasers for more of the Hwarang warriors: V of Bangtan Boys, Jo Yoon-woo (I Order You), and Do Ji-han (Basketball).

Upcoming KBS youth sageuk Hwarang takes place 1500 years ago in the Silla dynasty, during which a group of handsome and skilled warriors known as Hwarang underwent training to become protectors of the king. This is the story of how these young men evolve into fierce warriors, and as with any coming-of-age story, there will be love, heartbreak, friendship, and clashes. With all that testosterone, go figure.

In the stills, Sam Maek-jong (Park Hyung-shik) takes a breather against Aro’s (Go Ara) back, and from the look on her face, I don’t think she’s as at ease as he is. But as the faceless king who fears that death will befall him at any moment, he finds peace and comfort in Aro, a Silla-era Candy who is half commoner and half royal by birth. Uh-oh, I sense unrequited feelings already. 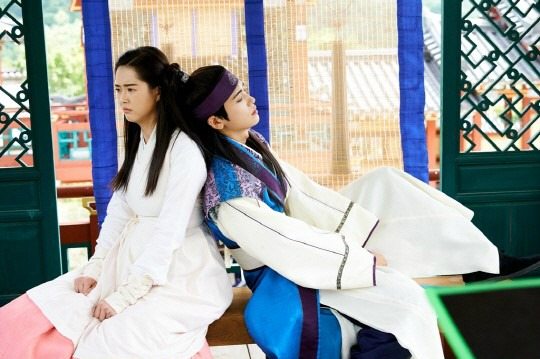 In Han-sung’s (V) teaser, his copy reads, “Pure Crystal. Last royal blood of the Seok Family.” As the maknae of the Hwarang crew, he’s described as the playful, mischievous, curious cat. He thinks Sun-woo (Park Seo-joon, She Was Pretty) is the coolest hwarang ever, so he follows him around like an eager little puppy, much to Sun-woo’s annoyance.

The copy for Yeo-wool’s (Jo Yoon-woo) teaser reads, “Leisurely, quick-witted, mysterious hwarang.” Because his mother is the sister of a former king, Yeo-wool has power, but he’s not interested in wielding it. As for his father, that remains a mystery, and he stuns Sung Dong-il’s character when he asks if he can call him “daddy.”

Last but not least is the teaser for the cold and privileged hwarang, Ban-ryu (Do Ji-han). His copy reads, “Double gold spoon. Prickliest of them all.” The women of the palace swoon over him, but he could care less about them. He tussles with Sun-woo (Park Seo-joon) and doesn’t seem keen on losing, and he tells Soo-ho (Min-ho, Because It’s the First Time), “The world has never changed. The strong defeat the weak, and the powerful and ardent will possess what rightfully belongs to them.”

Hwarang will premiere on December 19 on KBS. 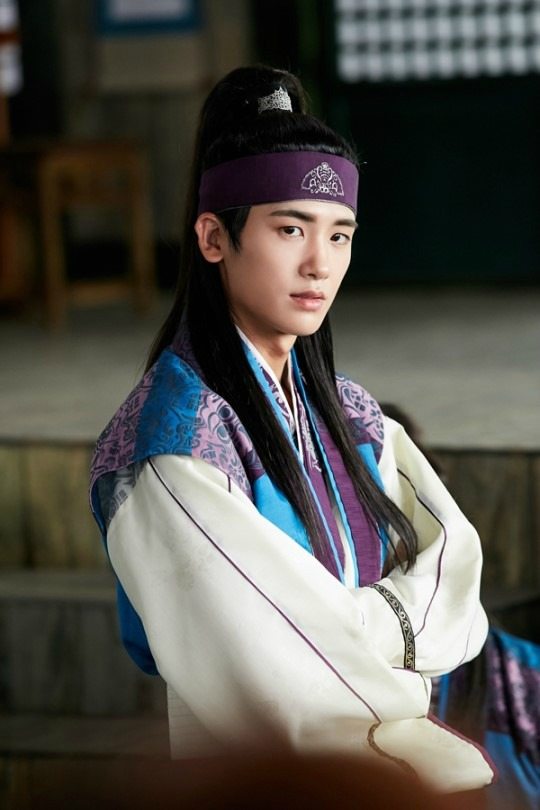 I feel pretty sure that show is going to kill me. Thank you for the lovely article

Will watch this out of curiosity and for V, tho I know he won't be in most scenes, there's Park Seo Joon anyway. I can't seem to like Go Ara, I don't know. I just hope V can make use of his King impersonations with his voice. Such a shame if he will just be all cutesy and fluff. And Minho of Shinee, I just can't take him seriously, and now with the wig, haha, no, really no.

I think Kim Taehyung is way prettier than Go Ara. If V is really a girl, she doesn't even stand a chance. Yes, I've seen the V's female version.

My thoughts exactly! They are going to make him act all cutesy and immature.... M so scared that we are gonna end up hating him. He actually said in an interview to expect something immature from his character * sigh*

Yes i agree and I am hoping best because he is a good actor from the small snippets of his groups mvs, where there ia lot of acting elements..Hope his character is written good.^^

It would've been nice if Hae Soo had ended up in this era instead, if only to fix Go Ara's awful eyebrows.

And those wigs. There's something about the guys' hairstyles that irk me.

I thought that Jo Yoon Woo was a looker, but he really looks pretty in his role...

V in real life and Han Sung the character..I see no difference lol.

Another flop only pretty faces and only few can act...

Episode one hasn't even aired and it's already a flop? Wow!

I'm keeping the good thoughts about this one. No high hopes, but a fun ride.

Either way, it's kind of interesting when a see those sageuks, set in 1500 years ago. When I think about eastern History, this seems like a completely different planet, but in the same era. It's so good to be able to watch - even fictionalized - how their world was.

Will watch it for V. Idk, so far I am not really into his character. It is your typical cutesy and will die first type of character but he said there is sadness in Hansung so I am not entirely hopeless. I also want him to prove he is a capable actor, I adore him but if it comes to dramas I am ruthless so please do well!

I hope this show will be light and fun most of the time. It seems so but it also seems that there's a lot of deep hidden histories that we'll only be able to know of when the drama start airing.

I knew people keep criticising the cast appearance here but in the video, I thought all of them actually look very good,
they are beautiful but they are still have manly feature,
you can tell it's a man but the pretty one,
it's like between kwank dong yeon and jinyoung in moonlight,

Kwak Dong Yeon is distinct in his warrior garb even with his long tresses and manly still for that era. Jin Young was never shown without a hat or a headgear coz the focus is to showcase his pretty face.

yep, they're all very pretty but i would never mistake them for women.

I think lots of names actually have a meaning, we're just not fluent enough to know what they are. ^___^ One name I see a lot is Kim/Kang Ha-neul. Ha-neul means sky.

(And I googled "korean names with meaning" and found this page! *is amazed* http://www.behindthename.com/names/usage/korean)

Didn't Minho also get a teaser? I found it interesting- not only because of the pretty (which hello) but also who might be his apparent one sided love? Interested to see how that's played out

My expectation for this pretty low so maybe it'll surprise me?
I like Park Seo Joon and this is second time sort of leading in the 3 broadcast and I want to do well but the overall vibe just doesn't click with me.

I'm not sure how the ratings will go but one out of the pretty much will badly criticized. Heck, even in Scarlett, where I found IU's acting average was criticized so I'm not sure about this one...

I just hope that in 2017 they won't stop doing pre-produced dramas just because many of them didn't do well with the exception with DOTS...I was going to say Cheese but probably don't want to relive that issue. Pre-produced dramas are okay I think if ACTORS can act. DOTS did well because all four leads were decent in acting and supporting characters were veterans so not much critiques...maybe for Onew but I thought he was better than Baekhyun in Scarlet. Plus Kim Eun Sook's magic.

It's natural to feel proud of someone who is achieving one of their dreams similar to how someone is proud when one of their favorite actors gets a lead role.

The drama hasn't even been aired and the slandering against Tae and his fans has already started.... Sigh.

to be fair, and i say this as a fan of BTS and V especially, armies can be pretty freaking crazy and over the top. i won't say all of them are, but the delulu certainly runs strong with a lot of them.

I'm so excited to finally be able to see this drama after so long. I feel that it's going to be lighthearted with slight angst on the side. I'm really looking forward to it!

I am going to keep my expectations not too high..But I am in this Park Seo Joon, Go Ara and Taehyung... Teaser kind of shows Taehyungs charcter really similar to Baekyuns like an innocent sunny charcter..But i really hope he gives a better depth to the character..Rather than the cute sidekick...

haa.. every time i see their teasers i always wonder how can a warrior has such a perfectly placed hair that look soo shiny..
but they are soo pretty, it wont hurt though

all i can see is purple O_O
even their face was purple @[email protected]
a purple era..

LOL. 9 days to go for the drama to start and its already a flop :D

The drama looks fluffy and cute. Looking forward to it. After having to deal with so much stress the past few weeks, I hope this drama can help me de-stress a little.

i think ppl are confused with what makes a drama a flop. the drama can't be a flop if it hasn't aired yet O.o a flop = performs poorly. many ppl think DOTS wasn't a quality drama, but they'd be dumb to say it was a plot since it was such a huge commercial success.

I think do ji han ban ryu is the most beautiful of them all ;D he also have that cold look yes..
also i think he looks half white..
He's the only one whose character seem to be serious..

I can't ignore the BB cream glowing looking of these boys!!!! OMG

Will watch this for Taehyung and for the touch of history.
I'm not expecting this drama to surprise me, and so does Taehyung's acting. However, I hope that the drama does well.
I'm at least hoping that Taehyung does well in here. Even though I am a fan, I was not that impressed by him in the initial teasers since the character felt so similar to my image of him as a K-pop singer ( cutesy, cheerful, and stuff). It was the moments where he's not being all smiley that should change that. I think he's quite ok with what I've seen. It was his acting in their MVs that got me hooked into their group so I kinda expected him to deliver. I really wish he will do well and bring that depth to the silent moments.
I can't comment about the others, since I only knew few of them. I've seen Park Seo Joon in Kill me, Heal me and Choi Min Ho in To the Beautiful You. Yeah, that's about it. I have no complaints whatsoever, unless influenced by reading other comments.
Anyway, Hwarang Fighting!

P.S. Please pardon me if I sound too fangirly.