Hidden backs and handholds for Man to Man 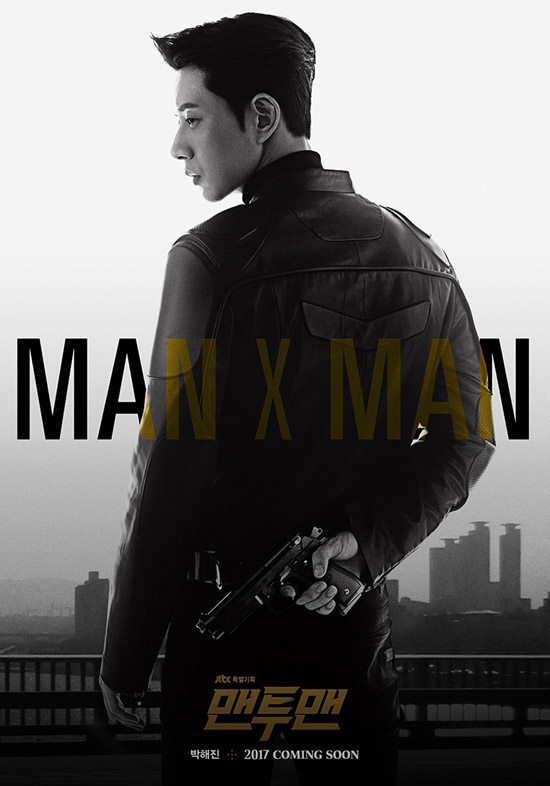 In keeping with the feel this show has been promoting all along, the latest teaser posters for JTBC’s Man to Man are snazzy and stylish, with the main characters—Park Hae-jin (Cheese in the Trap), Park Sung-woong (Remember–Son’s War), and Kim Min-jung (Gap-dong)—looking cool and confident.

Each character is pictured from the back with their faces in profile, and they each hold something behind their backs. I get that it’s meant to represent their roles—Park Hae-jin is the elite secret agent and bodyguard, Park Sung-woong is the movie star—but I do also find it mildly hilarious that it’s gun versus sunglasses. I’m… just gonna stand over here on the side of the guy with the deadly weapon while Mr. Hallyu Star is over on the other side holding his shades. Sure, he may be a mysterious ghost agent whose motives are unclear and is therefore dubiously trustworthy, but again, deadly weapon.

It’s difficult to make out what Kim Min-jung is holding behind her back, but she’s looking every bit of the tough manager who keeps strict watch over her Hallyu star, after having previously been his biggest fan. In fact, she’s named as the cause for the dramatic incident that turned him into a star in the first place, which sounds like every fangirl’s dream come true.

Man to Man will air on JTBC later this year, although an airdate still has yet to be announced. 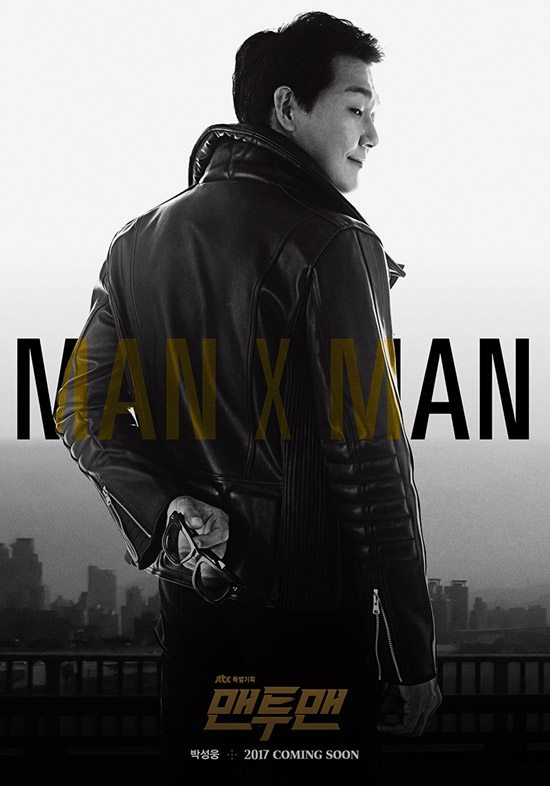 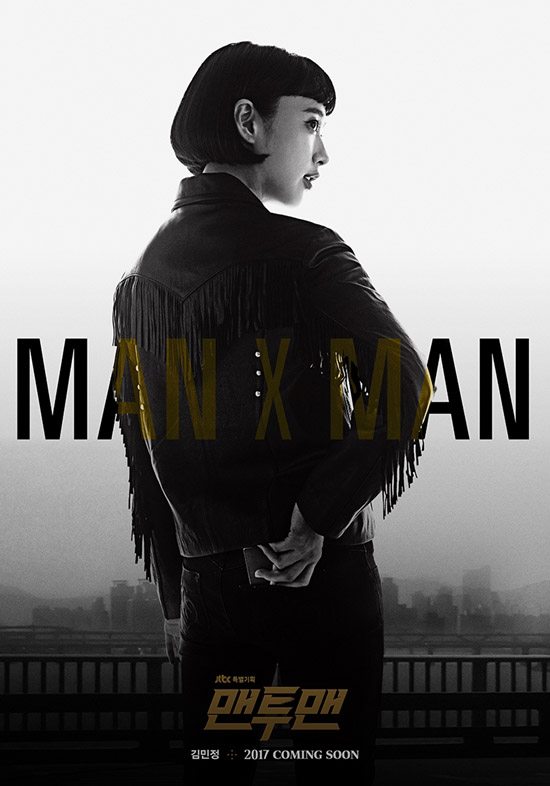 Same here. When will this show air?! These promotions are killing me.

Kim Min-jung is holding a... voice recorder? A powerbank? A lighter? Maybe she's Eun-tak and her power is to summon Goblin.

ah goblin....
how i miss them on my screen

would the pocket really be in the middle though?

Shhh ... it's a (whispers) secret pocket. It's put in the middle so you won't know it's there.

It's a special comb case that looks like a smart phone. It's for combing the tassels on her sleeves. They get into knots when the wind blows. That's why it's put in the middle pocket. Because it's special.

Lol! You guys are killin' me here!

If you see closer she really is putting it in her pocket... Don't know what the 'it' is though.... Looks lik a note n pen.. that managers carry.. schedule book??

Oh no, I zoomed in to see what she was holding and then I noticed the middle lining of her pants in between the two back pockets and realized she's standing with her body slightly twisted and turned, so it looks like she's sliding the object down the middle but it's really into the back pocket. Okay, weird asscrack pocket theory debunked!

Same. I thought "beeper?" Then phone was my next and last guess, too.

I thought it was a notebook and pen. She's holding this white thing that looks like it could be a pen. But who knows!

ROFL, when I wrote the post, I didn't imagine that it may turn into a middle ass crack where is the pocket theory thread. Thanks for the laughs people.

hoping this is after the park bo young drama, i seriously can't wait

Why do I always laugh seeing Park Sung-woong in this drama. After the batsuit, his expression in the poster looks funny to me. :D

He has a comical look. I think he will be good in comedies. Btw is this show a mystery genre of what ?? The (dark theme) posters seemed to imply that.

Can they announce the airdate already?! Please!

I can't wait anymore, just too excited for this because you know, PARK HAE JIN!

may be June 2nd

I feel kind of petty for asking when I'm hoping this will be more of a bromance show, but I need to know who to root for in the love line so I don't get disappointed. :) (Although if it's not Park Hae-jin, I think I'll still be disappointed. I'm tired of him not getting the girl.)

I think KMJ is more of a fangirl to PSW but her real loveline will be with PHJ. Plus even though the show is about the two guys I have a feeling from the last poster that it looks like a love triangle. I mean man×man - fight over love?

I'm confused...
Do we even want a love line tho?
hahaha

Hahahaha! This is so fun, everyone is trying and failing to guess what "SHE"'s holding behind her back. The only thing i can see there is her hand rubbing her........

Is it just me or is Park Sung-woong sooo hot despite being older? I don't know what it is but I find him so sexy.

How can they not have an airdate already?! Come on JTBC! Park Hae-jin, Park Sung-woong. Sold!!! Each one individually is enough to send women worldwide through the roof with all their sexiness. Then they went and put them together, hotness overload. I'll watch them, regardless of the plot. Get it together and air this show before my brain explodes from waiting!

I swear i wnet back atleast thrice while reading the article just to watch Park hae jin's face! I love him soo much i am hyperventilating to see his new drama. Jtbc you better not make is wait till the later half of the year for this. I am in love people!

Park Hae Jin's back profile with a gun! Love KMJ's too, very stylish.