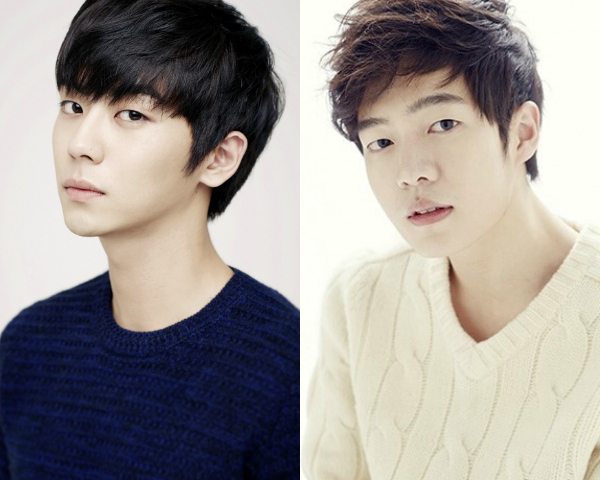 Ahh this news makes me so happy! JTBC’s upcoming Age of Youth 2 has added two more actors to its lineup today, with Ahn Woo-yeon (Circle) up to portray a super bubbly idol and Sohn Seung-won (Person Who Gives Happiness) confirmed to reprise his role as Park Eun-bin’s grumpy college newspaper colleague and friend.

I’m not entirely sure how an idol character is going to fit into the slice-of-life campus drama centered around a group of housemates, but I’m just excited to hear that I’ll be seeing Ahn Woo-yeon again so soon. He’s been steadily growing his resume since his 2015 debut, and had minor but memorable parts in Five Children, Jealousy Incarnate, and Strong Woman Do Bong-soon. But it’s his turn in currently airing Circle as one half of the most heartbreaking twin brothers in dramaland that made me sit up and take notice. He’s doing a fantastic job playing the slightly neurotic, paranoid twin brother bent on solving his father’s disappearance, and I’ll be interested to see him go straight into what sounds like a completely different character for Age of Youth 2: Ahn will play Hae Im-dal, an idol group member so sunny and outgoing it borders on shamelessness, lol.

Sohn Seung-won is similarly new-ish to the industry, having started out in musical theater, and only made his television debut in 2014. I remember watching him in Healer, I Remember You, and of course, in last year’s Age of Youth, and I recall liking him and wishing he got more prominent roles. I’m happy that he’s returning to reprise his character because his bickering rapport with Park Eun-bin was adorable, and I hope their relationship gets more developed this season. If nothing else, I would be happy enough watching his horrified reactions at her admittedly poor attempts at aegyo. It’s the cutest thing.

Ahh at least my OTP will be there. More horrified reactions to aeygo please.

Also I have a minor crush on him. Just a minor one.

So many likes.. I thought I was the only one.

The cast for Age Of Youth 2 is becoming more finalized with these new additions and the other members who are still coming back. I loved the first season and I can't wait for the second.
(Still a little sore about Park Hye Soo not continuing this series)

ikr. when I heard Park Hye Soo won't be coming back I kinda question how things will work out. Her role was one of the reasons i loyally watched the first season and now she's not there......

OMG really?!? I didn't know and when I read this headline, I just thought what a cute couple Park Hye soo and Ahn Woo yeon would make!!! I'm sad she's not gonna be there :(

the more i think about it, it seems like PHS pulled out last minute. They wouldn't have 'replaced' her with another actress to play the same role if they had been notified sooner. That means the writer had everything written all out and was expecting PHS to play the role...
Anyway, i'm sad too PHS can't come back and having someone else play her role makes me not wanna watch the drama anymore...

That's what I have been said from before. Although i really really hope it's not something unprofessional from any side. I'll still watch season 2 anyway. I've been waiting from early of this year.

I feel like an Age of Youth rewatch will be in order when this drama cycle is over. Crossing my fingers that season two will hold up.

same. At this point there's basically no way the drama can live up to the hype in my heart. It would have to cure the common cold or something...

I didn't know I wanted something else for Ji-won and her sunbae until your writeup, tipsymocha. I can't wait to see him make more of those half-horrified-half-admiring looks at her. I'd take ten seasons of that instead of them just straight up dating!

Yaaaaaasss x2!! I loved her atrocious aegyo and his incredulous reactions. I was really hoping for more from them this season, glad I won't be disappointed

lol, i would be grunting my way watching that ten season, but i will love it anyway. Snatch it drama pd.

Yay, glad these two are part of the cast. I've saw Ahn Woo Yeon for the first time in SWDBS and now I'm seeing him in a ton of shows (that's not a bad thing though). But I'm not sure if I like the sound of his bubbly idol role.

Does that mean Ahn Woo Yeon is going to be paired up with Han Ye Ri?

Oohh good question. I kind of hope not, but I can't wait to see what happens anyway.

I hope so! Ahn Woo Yeon's sunny and outgoing personality would be the perfect antithesis to Han Yeri's frustrating and stuffy nature. Hope he breaks her out of her shell.

ALSO, this better be a NOONA romance. I am already picturing him as a super excited puppy all the time.

I'm turning into a JTBC stan. They keep giving me quality woman- positive content and I am living!!! All jail JTBC lol ??

Just time to watch season one and get in the mood.

I love the fact that we can see Ahn Woo Yeon everywhere now whoopee! And yaaaaassssssss newspaper buddy is back! It's nice to see some of the cast do come back for the second season because my heart can't take another missing one ugh

Ahn Woo Yeon just like another Gong Seung Yeon. Popped up everywhere, not like that I mind tho

Those Circle beta project actors are putting in and getting work (and they deserve it)!

Yassssssss!! It's 4am here and I almost screamed reading this news! Yes for Son Seung-won reprising his role and yes for an additional of Ahn Woo-yeon!! It's like the drama threw us bad news first and the good one next. Please no more bad news regarding the cast, just start already, show!

Song Ji Won better get her man this season!

Ditto! If they focus on Ji Won and develop her and Sunbae's relationship well (whether he finally takes the plunge with her or not) I think I may be able to let go of the other disappointing changes to this season

Awesome! Now the biggest question is: who will Ahn Woo Yeon pair up with?

Wow, so excited!! I hope song ji won will get this cute sunbae, and Ahn Woo Yeon is a good choice ?

Five Enough is a 2016 drama so it's only Ahn Woo-yeon's second year of debut. That's pretty impressive because he was so natural in Five Enough. I especially love his scenes with the arrogant elder brother. I guess I'll tune in for him :)

Wow, We'll have more of Ahn Woo-Yeon, that's great. He really shines in Circle, though he spends the most part as a missing person. And his choice of taking a 180-degree flip in character is quite interesting.

22 Playstore, Okay Or Not Okay

Time to catch up on Age of Youth and then live-watch this one.

Hmm, curious to how all the new additions will fit with the story. That's a lot of male characters, unlike the first season where the guys served as more of character development for the Belle Epoque girls. I hope the show is still more focused on the girls and that these guys and possible lovelines are just bonuses and not the driving force of the show.

Yasss son seung won!!! I can't wait for his story and ji won story to develop. I'm a. It disappointed that there'll be someone else playing eun Jae, and yoon park not joining. But I think I can survive with this couple alone haha

YAS YAS YADSSSSS!! Song unni and sunbae!!! I was debating if i wanted to watch s2 after tge recent casting news but now i'm DEFINITELY watching it!!! ??

Everything is going great except for Park Hye-soo not returning

Yes, a silver lining!! Ahn Woo Yeon! And hopefully something will happen with Park Eun Bin's character in this season!

I'm excited for both additions to the cast. But my hope that this drama remains female centric and not just a romcom as this was the charm of the first season.

Sohn Seung-won? Yeay! please do something with his character and song-sunbae this time around, writer-nim!
idol?? can the character really fit the storyline?