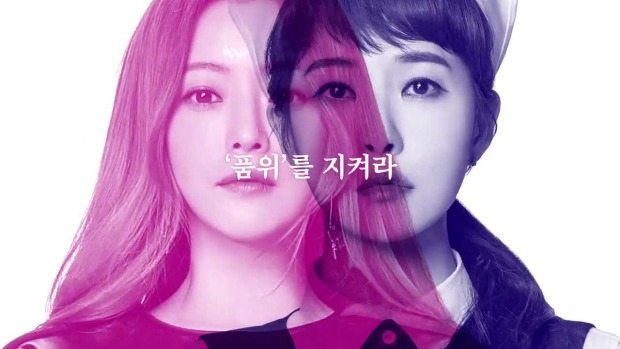 Another week, another premiere! (Anybody tired yet? Who else has officially run out of time on their schedule?) With Woman of Dignity’s launch, we’ll have a bit of a lull (and time to catch our breaths) since it’ll be the last premiere for a little while, until the currently airing dramas start winding down in another month or two. And then the madness starts all over again…

Reasons to watch: Is it a dark comedy, or simply dark melo? Is it poking satirical fun at its world of chaebols and social climbers, as the promo material tells us (but hasn’t really shown yet)? Or is it an eerie single-white-female story of a bumpkin doing everything she can to replace the rich wife she longs to be (which is what the previews have depicted)?

In any case, the credentials on this drama are enough to stir my interest: PD Kim Yoon-chul may have misfired with his most recent drama, Madam Antoine, but he’s got a strong track record of directing compelling stories, which include K-drama classic My Name Is Kim Sam-soon, the intense character drama Que Sera Sera, and two thoughtful dramas centered around modern relationships, Could We Marry and Could We Love. Writing is Baek Mi-kyung, who wrote romance melo Beloved Eun-dong and then created recent rom-com sensation Strong Woman Do Bong-soon (although she wrote Woman of Dignity, which was pre-produced, before Strong Woman).

Moreover, I’m eager to see how Kim Hee-sun and Kim Sun-ah face off, because both can be fierce and powerful in their own way, and I expect the battle of wills to be strong here. I’m not sure if this’ll be a story of betrayal and then redemption, or if it’ll be a war till the end, but either way I expect it to be intense and, hopefully, entertaining.

As a long time Kim Sun-ah fan, I'm really looking forward to this! PLEASE BE GOOD!!

I kind of don't mind Circle only being 10 episodes. I think it's one of those stories that will pack a lot more punch/be more impactful by being concise. I hate it when great stories drag on and on just to reach the 16/20 ep mark.

Planning to download them all at uni (YAS TO FREE WIFI!)

Omg I was listening to BTS so I wrote BigHit! GAAAH I mean Best Hit omg I am so sorry *dies*

I have zero room on my plate (I'm still trying to magically squeeze Duel in). I really want to watch this since the stellar cast, but I think for sleeps sake, I will wait and marathon it.

Hmm, I tried two episodes of Night Light a while back, and this premise seems similar. I'd prefer the satire over makjang, obviously. In any case, I'm afraid my Fridays and Saturdays are devoted to Yoon Shi Yoon. Too busy fangirling! :D

I hope this drama will deliver. At least fir these two Kims.

I'm sure it's a dark melo...I'll from the outskirts.
Can't handle anymore drama at this point...

Not gonna watch cuz seems pretty makjang from the trailers and I'm not emotionally strong enough to handle makjangs loll. Will be reading the recaps tho (if that'll be up). I am interested in the story and how it'll progress, especially with these two awesome addresses.

I'm officially out of space for any new weekend shows. Strangely all my shows (Korean and American) come on Friday-Tuesday and then Wednesday is completely empty

My wife wants me to watch this with her because of Kim Sun Ah. The ladies are very fine, but the promo material hasn't inspired much confidence. I've been enjoying Lookout by myself, so at least, even if it's not good, I have another drama to fall back onto.

Is Lookout good? I'm watching all kind of mystery/detective/prosecutor/thriller dramas and maybe this one would be in my alley. Don't know if it's worthy investing time though.

I love that photo above both ladies look amazing. Will wait what people has to say about it though because my week is already full. I still have to catch up on The Best Hit.

Honestly the writing in SWDBS was a mess, I hope the writer is better this time around.

Ugh, the writer of SWDBS, I have a grudge against that writer I hope this drama is a lot better than that one.
I didn't like Kim Sam-soon but it was more because the story was boring and I didn't like Hyun Bin's character than it was for the directing or cinematography so we'll have to wait and see.

I mean, maybe... Will wait to hear a recapper's thoughts.

I'm full booked on weekend with 4 dramas in the row but those two unnies are classical fierce unnies in dramaland. Shall I make it 5 then? lololol..

I never, ever, ever thought I'd say this but thank god we'll be getting a short break from awesome drama premiers. My schedule is full! That must mean great things are happening in Kdrama world. I want to see this, gonna have to put it on my list!

Kim Hee Sun is always my favorite Korean actress since she was debut, hardly to see her nowadays after she married and concentrate her acting in China market. Hope this show brings some differentia of her. I'm in for you, KHS!

So want to watch this, but I have no time! I haven't finished the last two episodes of Man to Man. I am behind on the weekday dramas as well, because I am hooked on My Only Love Song and don't have enough sleep time. Oh well! I will just have to add it to my plan to watch list. I hope it is really good, I am looking forward another drama starring Kim Hee Sun, I love her.

Haha, seems it's time to come out of my drama hiatus. It's be about year+ since I last actually wanted to watch a korean drama. After watching them for almost 10 years it's become a let down for the past few years. I start them and then drop them in less that an hour should I see the same cliche story, so I like that this isn't clear. Plus I love Kim Sun Ah. As for Kim Hee Sun I like her, but I never really found any of her drama particularly interesting. But I hope I can love her here. Hope this lives up to my expectation.

Will definitely watch anything with KSA in it. :D

Hi, this drama will be in viki or dramafever?