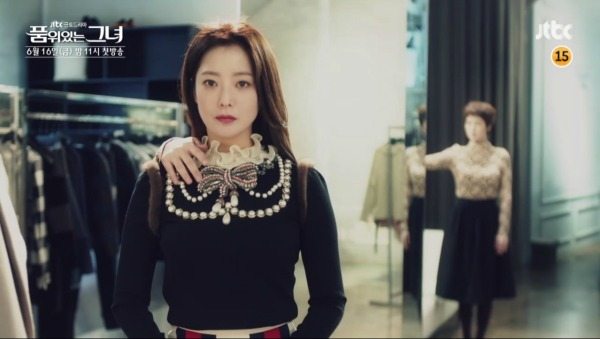 We’ve got a little over a month left until we get to see Woman of Dignity take over Man to Man, and JTBC has just released the first teaser for the woman-centric show. I remember reading earlier reports that this drama is supposed to be a satirical human comedy, but the teaser presents itself as more on the thriller side of the genre spectrum.

We see glimpses of our two leading ladies: Kim Hee-sun (Angry Mom) looks every bit the posh, Cheongdam-dong daughter-in-law she plays, while Kim Sun-ah (Masked Prosecutor) starts out as the woman from the countryside, with average clothing that is quickly replaced by a fancy fur coat and sparkly jewelry. There’s a charged scene of the two ladies crossing paths, Kim Hee-sun in a chauffeured car, and a dowdy Kim Sun-ah walking the pavement. Oh, the symbolism. It’s not hard to see why Kim Sun-ah’s Park Bok-ja character is jealous of Kim Hee-sun’s Woo Ah-jin: On the surface, Woo Ah-jin’s life is all glitter and rainbows, but we’ll see her life falling apart as her in-laws lose their fortune, she gets kicked out, and she finds her husband cheating on her.

I’m not sure whether Park Bok-ja will have anything to do with Ah-jin’s sudden misfortunes, but this teaser certainly seems to imply some antagonism between the leading ladies. There’s a really creepy moment when Kim Hee-sun is staring straight at the camera, and a disembodied hand slinks over her shoulder while we see Kim Sun-ah in the distance moving her arm behind a mirror. I don’t know about you, but I certainly wasn’t expecting unattached limbs moving about in this teaser, so that gave me the heebie-jeebies.

We finish the teaser with Kim Sun-ah closing the curtains shut behind a window, and the two ladies facing each other. This teaser was certainly stylish, but the tone was unexpectedly dark, so it will be interesting to see whether the show itself follows suit, or if this teaser is just an anomaly.

Woman of Dignity will follow Man to Man in the Friday-Saturday slot over on JTBC, and is scheduled to premiere on June 16. 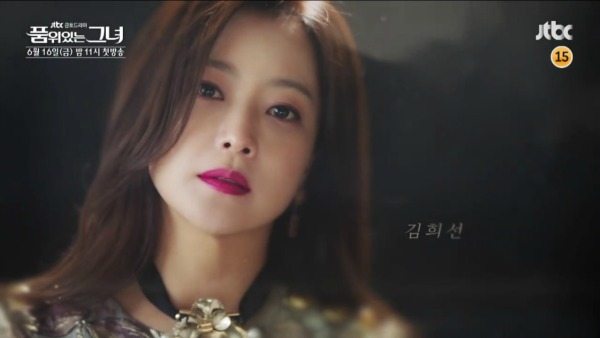 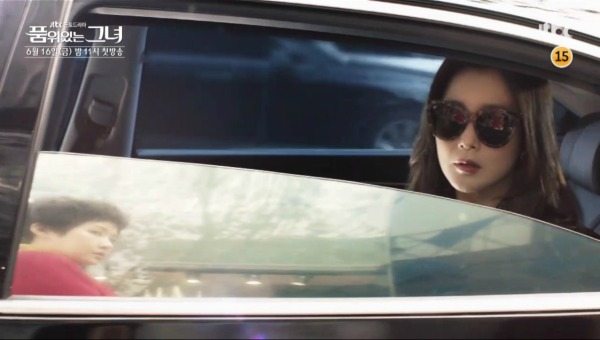 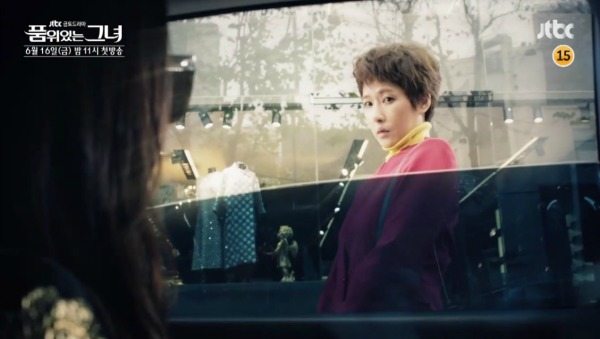 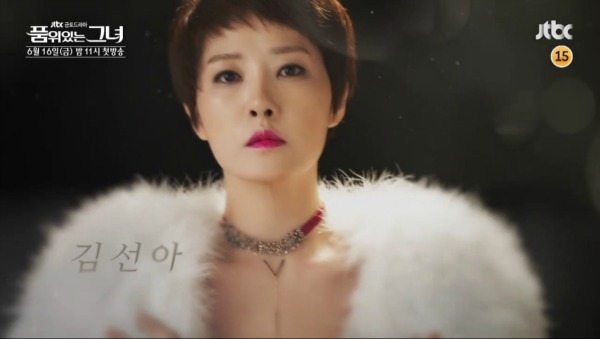 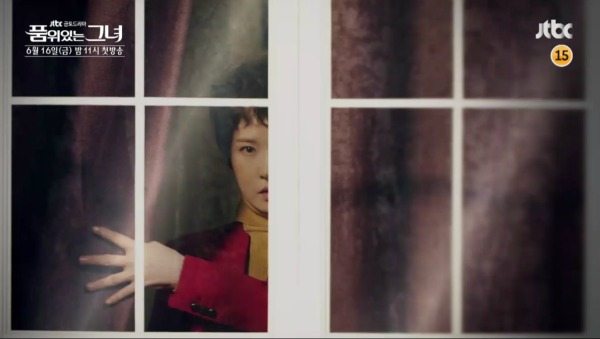 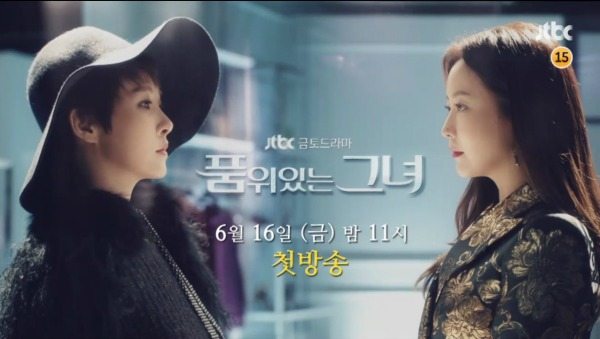 At first I was staring a lot at the weird hand on her shoulder, but watching it in the trailer is even weirder!
This is a stretch but I hope somewhere along the way the two ladies become friends.

That hand is gonna crawl into my nightmares. o.O

It's super creepy. That is the first thing I noticed in the picture. Are we sure this isn't a horror story?!?

Yeah, what's up with that hand?? I thought, at first, that KHS was holding her outfit up against herself...but no, it's channeling "Master's Sun" vibes!

Haven't seen the teaser yet, but I had to do so many takes to make sure that was actually a HAND on Kim Hee-sun's shoulder and not just me seeing things. Lawl.

I would love for them to become friends too! Even though we haven't even a clue about the plot.

I am so excited to have these two incredible women back on my screen! Crossing those disembodied fingers that this drama lives up to expectations and proves itself worthy of my fave drama queens.

Is this a horror series? I was super creeped out with the hand on the shoulder... *shudders...

anyway, i'm looking forward to this one since i love Kim Sun Ah and Kim Hee Sun.. can't wait to see their onscreen chemistry... hoping for explosive scenes between these two ladies.. hehe!

They look badass. Do they even age???

A woman centric drama is what I love ! I hope it would not be that creepy and the women will form a "sane" friendship.

so, The Hand got a role over years? Gotta earn a living, you know.

This drama may up against Criminal Minds.

Unreal how Kim Hee Sun still looks like 20 years ago. Just amazed. She got me into Kdramas as a little boy with a big crush. Isn't this how we all got into our dramas....:))

I feel you on that one.

The teaser's creepiness might be a fluke or might set the general tone of the show a la Ms. Perfect but forreal, what's the point if they don't romance each other? Teehee.

Yawn! I am so not into this drama! I some how never liked both the female leads. I think its more to do with their looks and expressions...which sums up their acting!

Man, I'm already allergic with something relate to horror genre. Please don't tell me this is a horror drama PD Nim, or else, I will quite immediately...

Um, so maybe there's a horror/thriller kind of vibe going? The hand that she fed consumes her?

What I wouldn't give for these two ladies to look fabulous together, become friends and rule the world. If you are listening drama gods, please grant my wish!

2 women powerhouses. Count me in!