Lee Sang-yub, Kim So-eun as husband-wife in You’re Closer Than I Think 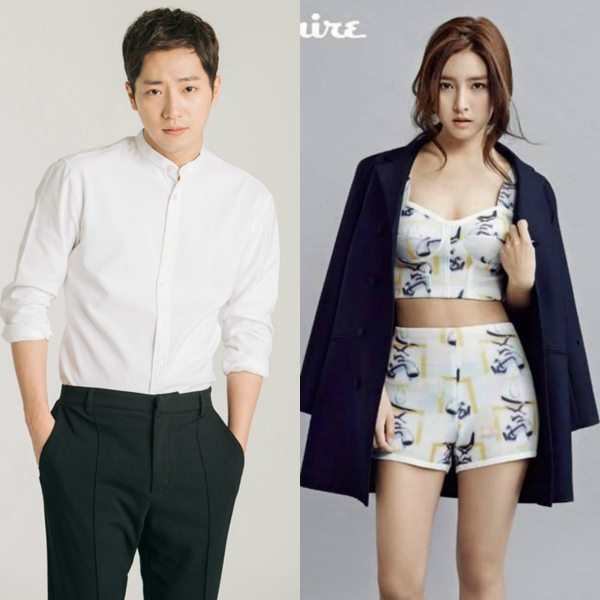 Lee Sang-yub (This Week, My Wife Will Have an Affair) and Kim So-eun (Our Gap-soon) will be collaborating on a new KBS drama special called You’re Closer Than I Think. It’s a mystery melodrama special about a bride who goes by herself to her honeymoon, leaving behind only one simple text message on the day of her wedding.

Kim So-eun has confirmed that she’ll be playing the runaway bride, and hot on her heels will be her husband who’ll learn more about this strange mystery around her as he chases her. Lee Sang-yub’s character, who I’m presuming will be the husband, is the owner of a used bookstore and a part-time independent radio DJ.

You’re Closer Than I Think will be a reunion project between PD Choi Yoon-seok and Lee Sang-yub, who have worked together before in Home Sweet Home, which was a drama special about a cyborg and his wife with the highest viewer ratings in 2016. I think both Lee Sang-yub and Kim So-eun both give off a similar cute playful vibe, and hopefully it could lead to a nice bickering chemistry between them. However, from the synopsis, it looks the mystery aspect could lead to a drama special darker in tone, but maybe the ending will still be a happily-ever-after?

KBS drama special You’re Closer Than I Think will have 10 episodes and is slated to air sometime this September.

This will be perfect if he's as extra (or more) as his character in My Wife's Having A Really Long Drama Title :D

That title really is long!

I didn't even read the title entirely until after I saw the lol replies ?

Lol!! That title IS long!

I loved him in This Week My Wife Will Have an Affair (out of breath!!!) and his love-line with BoA was really cute! I would prefer to see him in a cute rom-com but will still check this out for him!

I also enjoyed his bromance with Lee Sung Kyun (how he always annoyed him) ?? He is one of those actors which is versatile - he can be creepy and psycho (Signal), can be someone who can make us cry (Doctors) to someone who is so extra (This Week) ???

omooo 10 epi? Yeayyy! I was sad to think that I'll get only one epi. But this 10 epi will be one hour each right??

I'm already loving & shipping them even the drama is yet to start ottokee??? Both are my favourites and so underrated! Finally Soeun will act with someone who is on par with her. I love Jae Rim as a person but he and Soeun seem to have a better chemistry in real life rather than in a drama Our Gabsoon (yes it is contributed by the weak writing mostly).

Anyway, looking forward to this drama! ❤❤❤

Soeun is has been typecasted for quite similar roles in a drama, that I want to see a different side this time.. Although it is just a very few, I enjoyed her performance in movies like Entangled and Mourning Grave which I think gave her chance to do more complex character especially in Entangled.

Yeah. I feel like she has potential, but the writing for her roles always seem to be lackluster.

I've been wanting more drama specials with around the same length as White Christmas so I'm pumped for this. This pairing is awesome!

This is actually one epi drama special, just like other KBS Drama Special before.

Yes this pairing is awesome ?

I think the main reason I loved This Week My Wife is Having An Affair (why is it this long lol) was because of LSY's character. His love-line with BoA in that drama was so cute! I've seen few shows with KSE (Ga-eul!!!), but I'm really looking forward to what she'll bring in this one. This drama seems promising (yay for 10 eps!)!

I hope this means there would be more lead roles for Kim So-eun in the future. She has always been good and one of those actresses that shines in sageuks.

I hope her next project will be a good sageuk. Her performance in Empress Chun Chu is still my favourite, and I saw netizens' comments - some fans still remember her acting in this drama ( as well as in Scholar).

That's the show that made me follow her. She has been in a couple of crappy sageuks but she managed to shine despite the limited screen time.
"The Man Who Can't Get Married" is still one of my favorites.

Same. Not only sageuk, I think she really did many crappy drama after Horse Doctor (HD was crappy too but still bearable compared to others) . I hope her comeback to KBS after so many years can give her some lights since KBS is like her 'birth home'.

I'm still hoping for her and Kim Bum's reunion. I want them together in a drama!

That's a dream reunion that we never know if it will come true or not! Maybe on 2019? 10th anniversary years of BOF LOL. ?

Oh nice
I liked her in liar game

Why can Lee Sang Yub only get the lead for drama specials?? ? I want a full drama.

Oh, I saw the word "special" and immediately assumed it would only be a 2 episoder. 10 is much better!

But I heard each epi will be around 15 min probably ?

Tsk. Might as well be a web drama then.

It is better if they give us 2 full epi just like another drama special instead of webdrama format.

Adding some news : Some actors from Chief Kim team will also cameo in this drama since PD Choi Yeon Seok was also co-directed Chief Kim. I think Nam Goongmin, Dong Ha, Kim Won Hae and few others will appear as cameo.

This sounds better and better every minute! :DDD

I'm happy for soeun, finally in new drama with positive feeling. from the story we may see a dark side "like SWWTN character" it's my favorite role for her tho. plus the guest cast are wooow, it may her only chance to work with goongmin , WonHae and Taecyeon, so I'm really happy for her. but now I'm worry about the 10EP, are they 1 hour or less (*0*)?!

one more thing, I'm glad to see the male lead has positive review .. I don't no him will but that encourage me to start "My Wife’s Having an Affair" early lol.

Please do watch it! It's one of the best shows last year, and last year had a lot of good shows to start with. :)

I support this ❤ In fact I just rewatch it last month ? 12 epi is even better.

Oh,seeing Lee Sang Yub as lead i NEED to check this up!!!Still,when will he be a lead in a proper drama,he is so underrated!!!

Wow - I love the premise for this. I am hooked!

Yes yes yes yes yes! Put them together, then I am in! I know it's just drama special, but I'm still excited for it!

I'll watch, I like Kim So-eun ever since BOF and I miss her in my screen.

How about this, instead of Lee Sang-yub playing her husband, her actual husband is Lee Soo-hyuk. The day before their wedding, they get into a huge fight, peppered with moments of making out because why not. Then on the morning of their honeymoon, Lee Soo-hyuk wakes up to find her text and his wife gone so he goes to his best friend, Lee Sang-yub and they team up to find her.

"peppered with moments of making out because why not."

18 Fatcat lost her way while on semi-hiatus

Kim so eun really loves to do all these mystery genre dramas....not that I mind :-P bring it on!

"owner of a used bookstore and a part-time independent radio DJ" - Sounds like a pretty cool job tbh!
The story-line sounds promising. Hopefully it'll be better than the other web dramas she's been in (her acting's great. It was just the sketchy writing that made those web dramas hard to watch).

Okay, it's appear that the 10EPS are different stories with different cast and one of them is story above "soeun & sangyub". So they only had 1EP!!

*KBS had the same especial *system* before .. l'm kind dispponted, l wished they made it as 2EP at least

Where did you read it? Looks like it will be just like the usual drama special. ? 10 epi is actually quite a long for drama special, it is like a mini series already .

From last Naver article ...as Callie said they're following the same system from the last year. It sad coz their casting is good in this one.

Hopefully will get better project news in the future.

Ahh, that make more sense. That's similar to how they did their specials last year. But I believe they split 6 stories over 12 episodes so each one had 2.

Dang, I wanted more eps for this one. Sounds like it could be really interesting.

What a breathtaking photo of Kim So Eun. I so love her since BOF. Glad to see her again in a show!!!

This is legit a prequel of Lee Sang Yeob's character in This Week My Wife is Having an Affair (sigh the title is long) and it makes me super happy ?

Kim So Eun is always great and anticipating them together! Too bad it's only special drama but maybe this way the writing will be tighter.

Kim so-eun, a goddess❣️ I wish her the best.

LSY has never failed me yet. I remember watching Doctors just for his & NGM's story arcs. And I preferred his & BoA's storyline in his last drama (title too long!)

I'm looking forward to KSE's drama comeback, as much as I like her & SJR, their drama was a writing disaster that I couldn't watch past ep 5.

i love both kim so eun and lee sang yub so i'm really looking forward to this! i'm also super happy that kim so eun is landing herself bigger roles each year so wohoo!!!
the plot tho kind of reminds me of 'my beautiful bride' but i hope i'm wrong and that this doesn't turn out similar...

Sounds like a Korean adaptation of gone girl, it can be fun I liked the movie so much

Loved him and BoA in TWMWIHAA (lol, indeed)! <3 Still hoping for a reunion between those two one day.

I love kim so eun so i wanna watching this Kdrama.