A rosy reunion in MBC’s 20th Century Boy and Girl 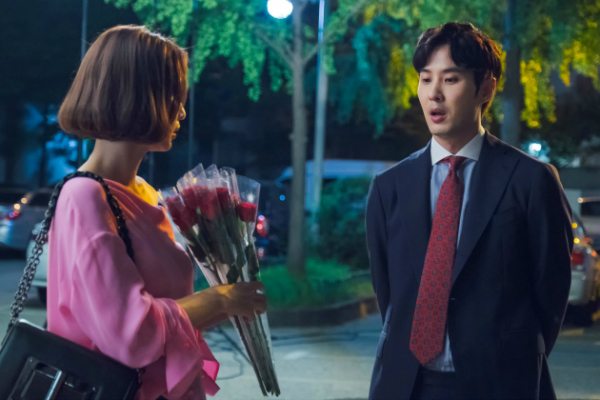 Filming has reportedly resumed for MBC’s upcoming romance drama 20th Century Boy and Girl, with plans for the series to premiere on schedule despite the ongoing strikes at MBC and KBS. Han Ye-seul (Madam Antoine) and Kim Ji-suk (Rebel: Thief Who Stole the People) star as childhood sweethearts who reunite in adulthood as very different people on the outside—he’s a successful businessman and she’s a beloved starlet—but not a day more mature than when they were teens. Hee, I love immature romance.

The new drama from writer Lee Sun-hye (junior writer from the Answer Me series) and PD Lee Dong-yoon (All’s Well With a Happy Home, Fated To Love You, Queen’s Classroom) is about a group of close-knit girlfriends who hit 35 and find that they’re still struggling with the very beginning of their love lives. Han Ye-seul stars as a former idol who became an actress with superstar-level fame. She’ll be a character who can be a diva on set, but when she’s with her lifelong girlfriends, she’s just one of the gang.

Kim Ji-suk plays a self-made man who returns from spending most of his life abroad, but he’ll reenter the heroine’s life with a bang (and with roses, apparently), bringing out the youthful side in both of them. Ryu Hyun-kyung (The Lover) and Lee Sang-hee (Our Love Story) play the heroine’s best friends who also grew up with Kim Ji-suk’s character.

Lee Sang-woo (All’s Well With a Happy Home) is reuniting with the director for the third time and costars as a former idol who had the opposite trajectory as Han Ye-seul’s character. He managed to survive in the industry but only barely, and even as an actor on daily dramas, he drives himself to the broadcasting station and often gets blocked at the entrance by security because nobody recognizes him. Aw, sad. I feel for him already!

So far on paper this drama sounds a lot like One More Happy Ending, with the former idol stars, focus on thirtysomething girlfriends, and childhood sweethearts to boot. It has a good cast, so I hope it’s as cute and feel-good as well.

20th Century Boy and Girl airs on Mondays and Tuesdays following The King Loves on September 25. 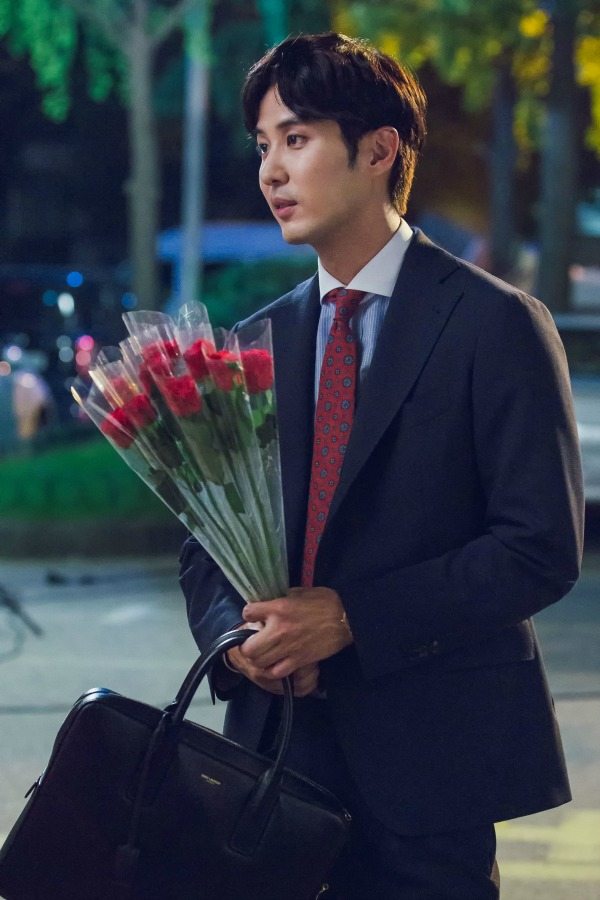 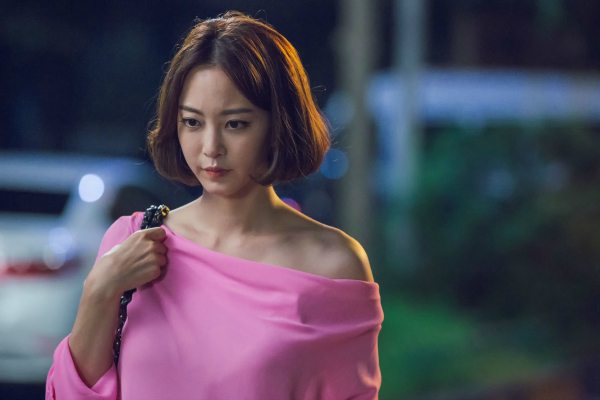 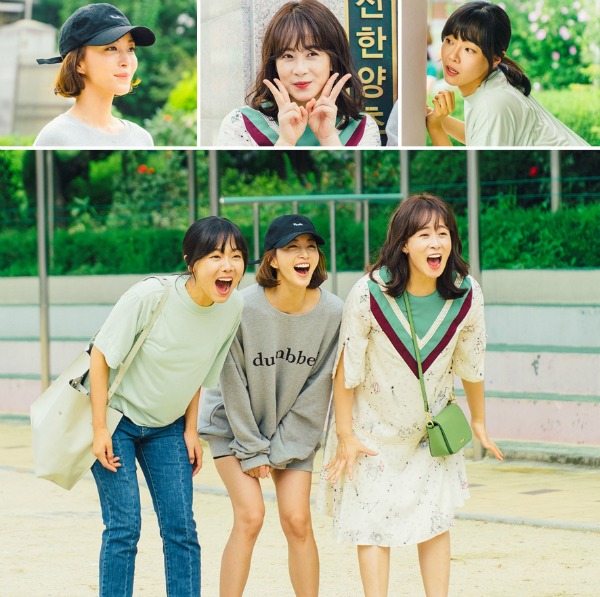 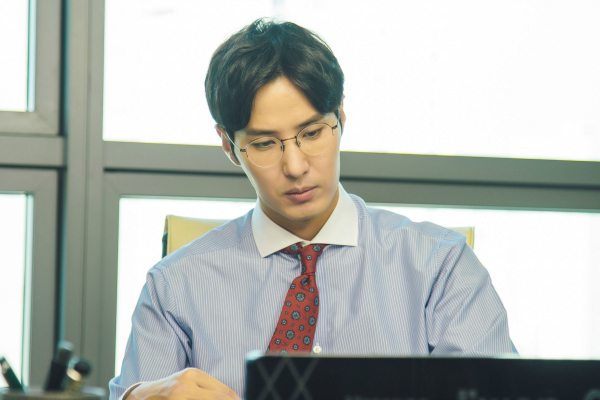 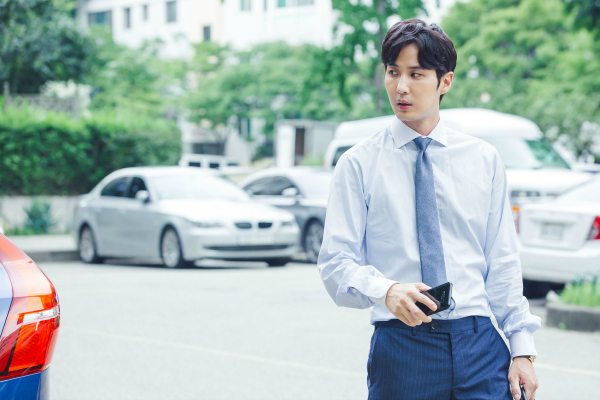 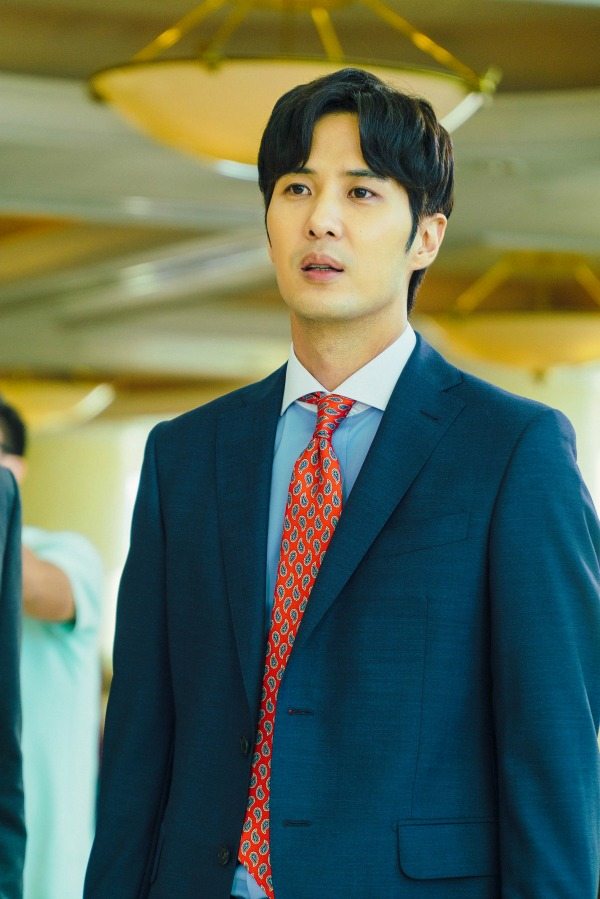 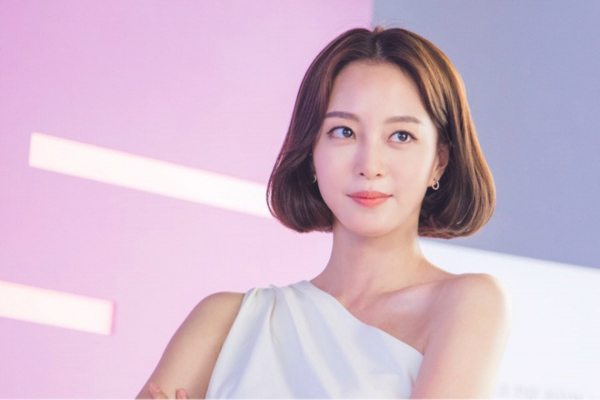 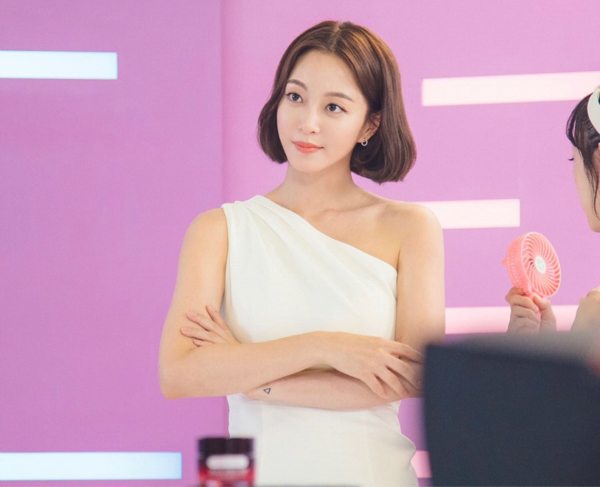 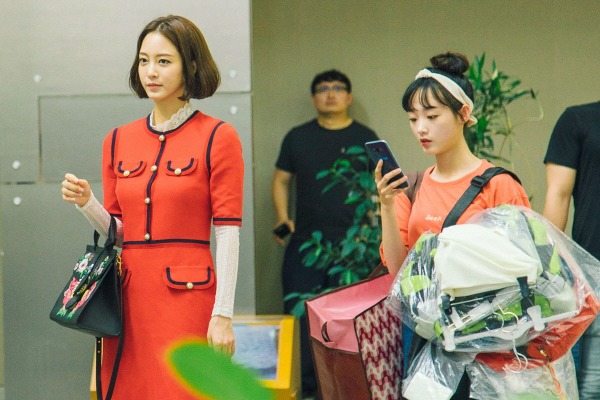 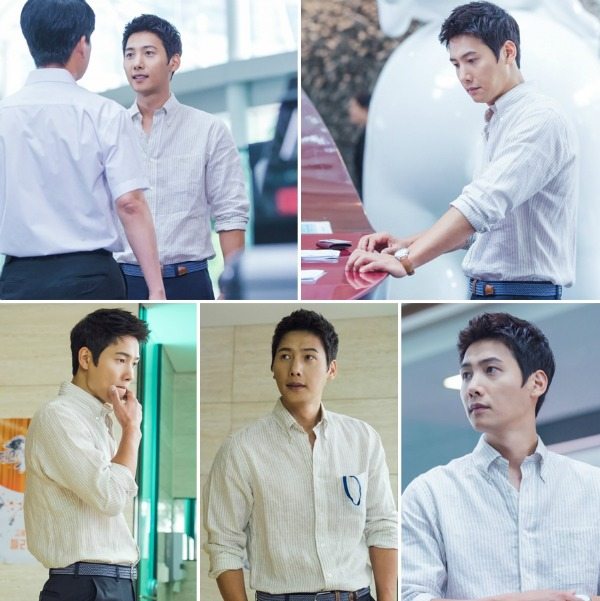 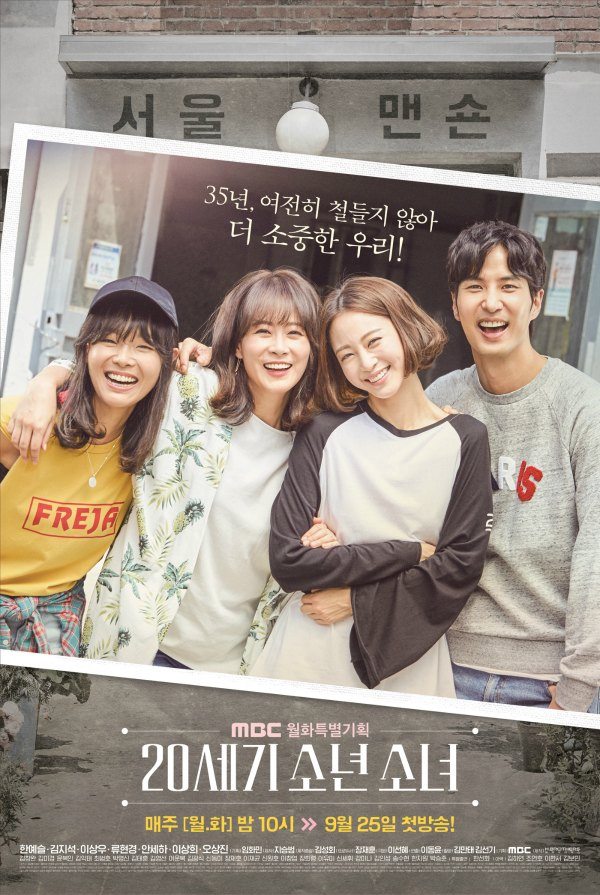 Heeyyyy! Kim Ji Suk got a lead role? I've been waiting for this since personal taste. Took them long enough!

I agree and I am glad to see him in a lead role! I liked him in Personal Taste, but honestly, it was in Wonderful Mama that I really wanted to see more from him. His role in Oh Hae-Young Again had me cracking up nearly every time he was on screen.

I *loved* his French!

I loved KJS's turn as Lee Jin-Sang in OH HAE-YOUNG AGAIN, too. Between his "Rooftop Party" gyrations and his meaningful dialogues with plastered Soo-kyung -- rendered in French gibberish accompanied by histrionic Gallic gesticulations -- I laughed my butt off. (I'm even more delighted to learn that IRL he majored in German, like I did.) Jin-sang isn't just a comic cliche, however. He actually is a very sensitive and deeply injured soul -- much like Soo-kyung. He recognizes her pain, and has his own issues and growing pains to deal with. Look beneath the buffoonery, and there's a complicated human being -- whom Kim Ji-suk portrayed with great subtlety and nuance.

That is exactly it, his performance has something behind it, always. Even when playing it up for comedy, you see a flicker there that hints at depths more that can be interpreted multiple ways. Because of this, any character he plays has an extra layer of complex dimensionality. I am glad he has a lead, and hope the writer and director know how to use his skills to their full extent because I think it will give amazing results.

Yeah that was my first reaction, too! He's finally landed himself in a lead role, he's been everywhere but the spotlight.

This looks really cute and it might be exactly what I need. A feel-good rom-com to alternate with Temperature of Love, since they seem to be tonally different
I'm looking forward to the relationship between the girlfriends!

Ever since watching Sassy Go Go, I wanted my Teacher Yang to have a happily ever after! So glad to see Kim Ji-suk having the chance to do so as the first lead.

I wonder if idols are the new chaebols in popularity of character type? We got it in School 2017, Age of Youth 2, and Best Hit to new a few.

The second teaser is out too! http://tv.naver.com/v/2078132 There may be regional restrictions but they'll probably upload it to YouTube soon.

There have been so few updates from this drama, possibly because of the strikes, that suddenly I realised we're only a week away from the premiere. Yay for less waiting!

Thanks for the link! Very nice teaser, and I really enjoyed hearing the Beach Boys. That set a happy tone, which is just what the doctor ordered. ;-)

I liked the character he played in Oh Hae-young again so much that I just feel like I'm going to love this series even before it airs! I don't know what got into me, but I just like him so very much. I hope this feeling won't change once I start watching this show. I'll have my fingers crossed that this will be a good show.

I enjoyed Kim Ji-suk's character in OHYA, too -- especially when he started speaking "French" to Soo-kyung. And dancing with her.

He was absolutely terrific as Yeonsangun in REBEL.

Yes, I agree. He is very funny in almost every scene I saw him in in OHYA. Though I don't think that I was that much into his relationship with Soo-kyung as I'm not usually into Noona romance, I enjoy watching their sibling-like or camaraderie relationship.

Another thing is that you made me feel like watching Rebel by your description of him being so terrific in it.

It's hard to be excited over a new drama when in the background hardworking people are striking. Good luck to them.

shouldn't they resolve the issue with the strike first, otherwise it might affect their dramas and shows they're producing...

I have this horrifying thought that they'd rather overwork the remaining staff just to get the show ready for airtime, than talk with those on strike.

or simply bring in strike busters

Lol, I feel you @girlfriday, just based on the summary, I'm already feeling bad for LSW's character.

Kim Ji-suk ? Thank God his successful portrayal of Yeonsangun in Rebel led him to male lead this time. He has always been good in whatever he does. I also don't really mind Lee Sang-woo as second lead here,seems like his character is also sounds interesting. He is a second lead to someone who is in his league, not to some younger & less talented actor so it is fine for me. I hope this drama will deliver. Anyway it's good to see more older, talented and experienced actors in my screen again. I personally feel excited to see some senior actors in new drama this month and upcoming months!

I totally agree with your sentiments, especially the part about experienced "older" actors. I had to put that in quotes because mid-30s isn't old in my book -- heck, that's just getting started. I remember being that age, once upon a time. ;-)

KJS was the bee's knees as Yeonsangun in REBEL. He conveyed immense vulnerability as the crown prince despised by his father. What a performance!

It will be fun to see what goes down with second lead Lee Sang-woo, who can be every bit as nuanced in his delivery as KJS. I loved him to bits as Kyung-soo in LIFE IS BEAUTIFUL.

The feeling you get when you are happy that Kim Ji-suk finally got the male progranist role in a prime time drama but you can't help but experience Second Male Syndrome for Lee Sang-woo (I think he is one of the most pitiful second male leads :( )

Thanks for the update on 20TH CENTURY BOY AND GIRL, girlfriday!

Kim Ji-suk first caught my eye in CHUNO, and I loved his role as Park Do-kyung's lawyer buddy in OH HAE YOUNG AGAIN. He was terrific as Yeonsangun in REBEL. I'm thrilled to bits that he has at last been cast as the male lead in 20TH CENTURY BOY AND GIRL. As if that weren't enough, Lee Sang-woo will be giving him a run for the money in the romance department. Having just watched LIFE IS BEAUTIFUL, I'm eagerly awaiting LSW's turn as second lead. Manseh!!

Yay!!! For Kim Ji Suk!!! Finally!!
First saw him in Likeable or Not and really warmed up to him there.

The day i wished for is to see Kim Ji Suk as a lead in the drama. He is my ultimate second lead. I dont care about second lead in every drama except when second lead is Kim Ji Suk. Then i dislike first lead hehe