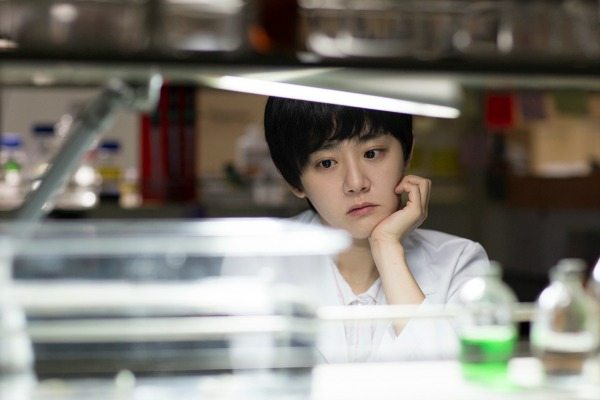 Good news! Moon Geun-young (Sado) will be making a comeback to promote her upcoming film Glass Garden, which has been chosen to open this year’s Busan International Film Festival. She’s been on hiatus since February this year due to her compartment syndrome diagnosis for which she had to undergo several operations, so I’m happy to hear that she’s recovered enough to go on the promo circuit next month.

I remember feeling intrigued by the premise of Glass Garden when reports first announced Moon Geun-young’s involvement last year, because while she plays the heroine of the story, the film sounds like it will partly unfold through the fiction-within-fiction narrative of a voyeuristic writer, played by Kim Tae-hoon (Lookout). Moon Geun-young’s character is a mysterious PhD candidate studying artificial blood made with chlorophyll, and is spied upon by Kim Tae-hoon while she carries on her research alone in a glass garden in the middle of a forest.

He reimagines the researcher for his new novel, which should make for an interesting blurring of what is real and fiction in the context of the film. Moon Geun-young’s self-imposed exile from the world is due to the hypocrisy she encountered, but what follows her retreat into the wooded greenhouse is a “shocking event,” although it’s unclear whether this event is real or part of the writer’s imagination. I love it when stories play with subjective narratives, so I look forward to watching Glass Garden when it becomes available.

The 22nd Busan International Film Festival will be held on October 12-21, and while there isn’t a general release date for Glass Garden, the film will have its red carpet premiere on the first day of the festival.

I hope she is in good health now. I miss her a lot.

I miss her in K-dramaland. Please come back for a drama too... Hope she is all recovered and well :-)

Moonie! Miss her so much!

Hope she is healthy & ready to make a complete comeback. Best wishes.

I miss her.. she is so natural, and i don't know why but i loved her crying scenes

Glad she's back and in good health, that condition is no joke.
The movie sounds very fascinating, why are dramas never this interesting.

Awww She's so awesome. Look at those expressive eyes. I hope she continues to get the rest she needs to heal and move forward.

It's about time for her to comeback!
And when chungmoro is better for her (for everyone i believe), still if she's considering a drama comeback i guess Ajusshi is good choice for her *she can rock 20's girl so easily with that look beside she's Miseang n Signal darling since he said h wants to work with her again* or Pretty Noona Who Buys Me Food *yet again she can rock the noona role*
Anyway, her movie really got good reviews as i remember so here hoping she'll make another steps very soon.

I hope it comes true... been too long waiting for her comeback and the last year she's been active in anything is in 2015 with Sado and The Village. If anything, the two dramas have interesting premises so I hope she would consider to pick a project this year.

Can u tell me who u meant?

Waahh, this is good news indeed. I miss her so much.