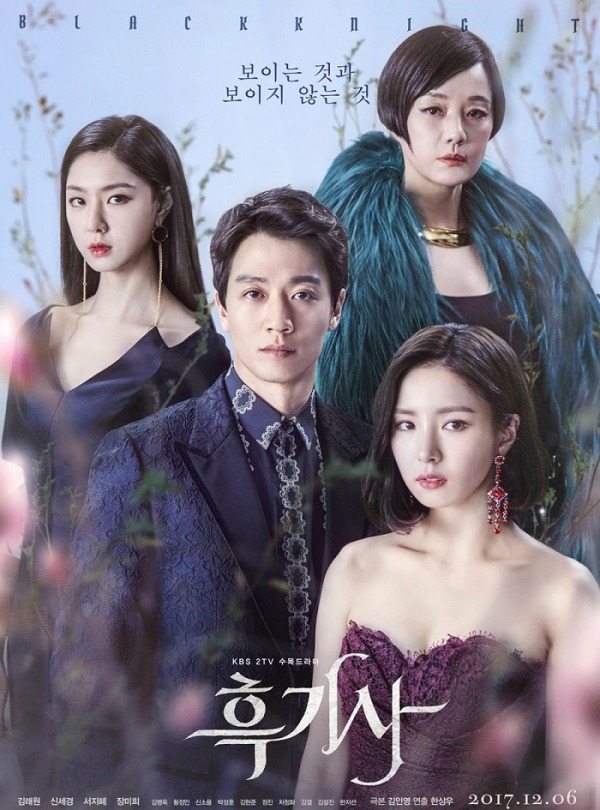 The posters for KBS’s Black Knight are pleasant on the eyes and carry a romantic, moody vibe, so I’m really trying hard to shake the Bride of the Water God flashbacks they’re giving me. Because we don’t want to jinx a show before it’s even begun, right? (Bride of the Water God was beautiful to look at, but oh my god so boring. Not an association I want to carry over!)

Perhaps it’s just the Shin Se-kyung connection, or at least I’m telling myself that, since she’s going from one fantasy-romance drama to another; Black Knight spans 200 years and tells of a pure-hearted man, played by Kim Rae-won (Punch), who fights a dangerous fate for the woman he loves. In the group poster above, the two leads are joined by Seo Ji-hye (Jealousy Incarnate) and Jang Mi-hee (Madam Antoine, Unkind Women), both of whom are described as playing characters who have lived for two centuries. Meanwhile, the copy reads, “Things that are seen, and things that are unseen.” That sort of seems like an unfinished thought to me, but I can see the mysterious air it’s going for.

The couple poster below, on the other hand, tells us, “A fateful love that travels through time to begin again.” Each individual character poster also bears its own copy, with Kim Rae-won’s saying, “Because I’m your black knight.” (Note that his name, Su-ho, also means guardian. It’s a common name, but in this context I’m sure it’s no coincidence.) Shin Se-kyung plays a character named Hae-ra who keeps an optimistic attitude in the face of struggle, and her poster says, “If I meet you, will I be able to turn my life back?”

Seo Ji-hye plays a character named Sharon, a selfish and mysterious woman whose copy tells us, “What you see is not all there is.” And last but not least is Jang Mi-hee playing a character named Becky, which seems oddly chipper for someone with as commanding a presence as she has, and her poster says, “Everything must go back to its place.”

The drama certainly has my interest piqued with all its roundabout mentions of centuries-long lives and fateful relationships, and all of its promotional material has been picturesque and atmospheric thus far. Directing is PD Han Sang-woo of melodramas Equator Man and Unkind Women, both of which he worked on with writer Kim In-young. But more than those two dramas, I’m intrigued by her past credits, which include The Woman Who Wants to Marry and its charming follow-up, The Woman Who Still Wants to Marry, as well as rom-com Mae-ri vs. Dae-gu Battle and Women in the Sun. Her work has taken a more melodramatic turn in recent years, but somehow I’m reassured in knowing she can be funny too. 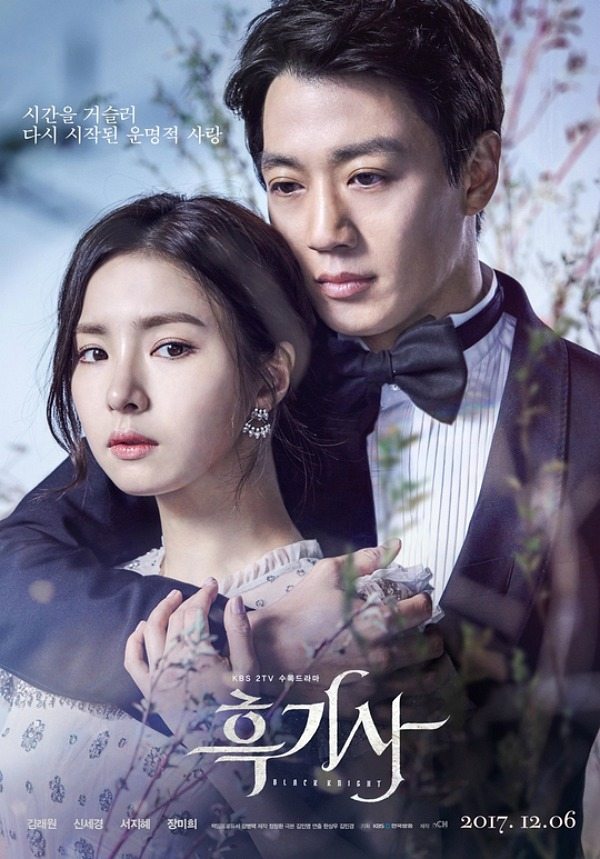 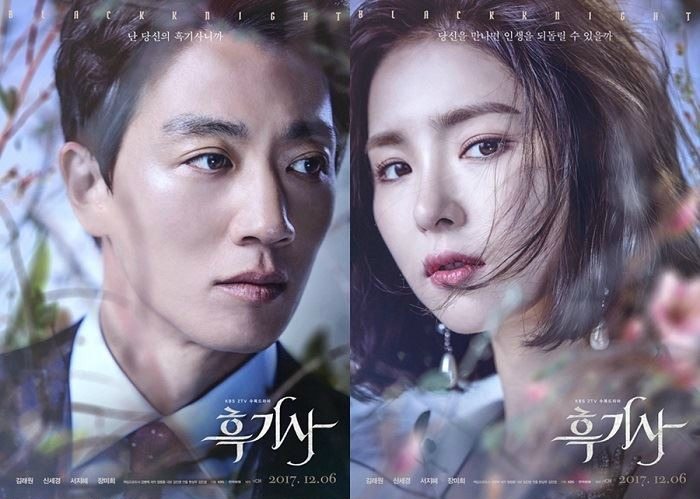 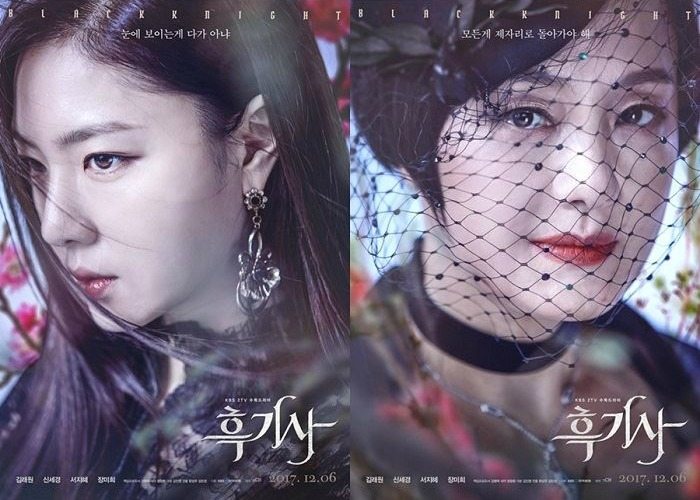 what are drama gods trying to do to me this month?i mean we have black knight and am not a robot premiere next week with the same time slot xo they will be competitora and add judge vs judge to the mix!
BUT i love YOO SEUNG HO KIM RAE WON/SSK AND YEON WON JIN
AND I WANT THEM ALL TO WIN/B SUCCESSFUL AND HAVE TOP RATINGS which will be impossible there will be the winner ,middle man and last one T T

Problem with having too many "oppas" :( (though Yoo Seung Ho is not really an oppa to me). I was just thinking the previous batch of dramas were great and wondering if I still have shows to watch in the next batch but now there are TOO MANY!!

Not forgetting Jo Jung Suk and Yoon Kyun Sang on Mondays-Tuesdays too!

Suddenly I feel there are many fantasy drama, or maybe it is Shin Se-kyung's effects (This girl probably loves fantasy drama 😆).

I'm not interested in watching this drama...but excuse me: who chose Kim Rae-won's outfit in the group picture?
A patterned shirt AND a textured (lace?) suit?!
JUST- NO.

Haha, that bothered immensely too.

These posters actually remind me of The King Loves’ posters. Because I don’t like them both! They all looked stiff, fake & awkward~

But I really loved the drama (The King Loves) despite its awful posters. Hope the same will happen to Black Knight? *being optimistic*

Oh, & I loved Bride of the Water God’s posters! I used them as wallpapers for months! *I miss Habaek*

Me too! The Habaek posters were so pretty I used them as my wallpaper till October. TvN always makes nice posters.

They kind of look like they are attending prom with Mardi Gras theme except no one is having fun because there is way too much adult supervision.

Spike the punch, PD-nim! If for nothing else we can at least fall asleep with happiness.

I remember enjoying BOTWG but somehow I remember nothing about it too. Maybe it was indeed not memorable in the end. I really liked Habaek though, so I like the association of this to that.

I think I’ll watch just for the plot. There’s something about it that reminds me of how excited I was for MOTW despite not understanding what the heck it was initially going for. But that drama had assured writing that was evident from episode 1. If this is similar, I’m on board. If not, then I’m washing my hands off because as much as I liked BOTWG, I can’t handle too much SSK at once.

God, I LOVE Shin Se-kyung's hair in her individual poster. Would I ever look so stunning with a short cut? I don't think so...

Sigh, please let Shin Se-kyung not get any hate for her performance in this drama. Amen.

I feel really silly, but I've been looking at these pictures of Seo Ji-hye and haven't been able to recognize her. This is the same actress from 49 Days?

Are you me? I am rewatching 49 Days, and i was thinking the same when i saw her picture i even tried to imagine her with bangs, I've seen Lee Yeo Won recently in Avengers Club and she looks the same not much difference and still recognizable, But SYJ has changed a lot she looks even different than her looks in JI.

LOL. It never occurred to me that she was the same actress until after I decided to look up her previous works.

Whaaat?? She's the evil friend Shin In Jung? If you guys didn't mention it, I will never realize that it's her 😅

I had to look her up on Asianwiki. Then when I saw the films and dramas she was in, I finally realized who she was. I did not (and still cannot) recognize her in these pictures.

I have to admit I'm kind of intrigued by this project.

Slovenia is top of my travel list after Murano island. Find this imaginative and romantic so I'm leaving all the baggage behind and watching the actors through new eyes.