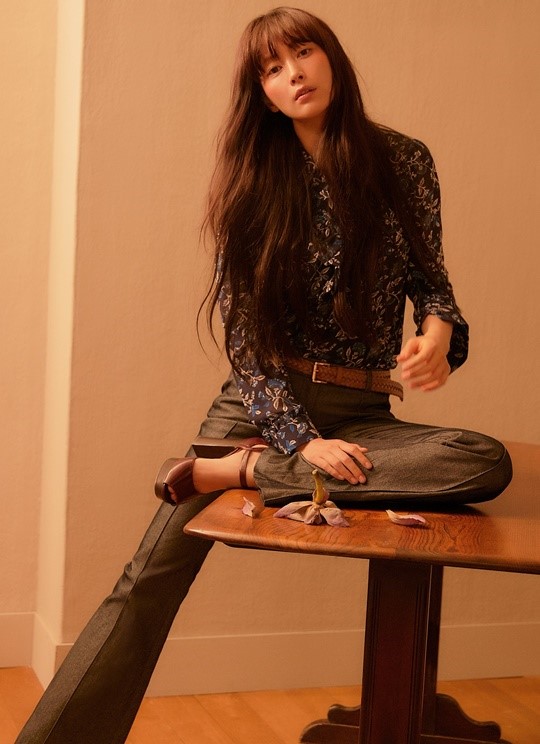 If Dramabeans had presses, I’d be yelling, “Stop the presses!” Lee Na-young (Beautiful Days, Runaway Plan B) has confirmed that she will star in tvN’s 2019 rom-com, Romance Is a Bonus Book. The drama will be Lee Na-young’s first in nine years. Lee Jong-seok (While You Were Sleeping, V.I.P.) will co-star, in what is likely to be his last project before serving his compulsory military service.

Lee Na-young will play Kang Dan-yi, a once-successful copywriter who reached soaring heights early in her career but, at the start of the drama, finds herself unemployed and overqualified for every job she applies for. Looking to make a fresh start in life and desperate for a job, she decides to hide her educational background. She masquerades as a high-school dropout and lands a job at Lee Jong-seok’s publishing company. Since this is a rom-com, there are sure to be romantic hijinks between Dan-yi and Cha Eun-ho (Lee Jong-seok’s character).

Lee Na-young has kept a notoriously low profile the past several years—to the point that I’m most familiar with her older films and coffee ads. Over the past decade, she’s only chosen to appear in a handful of acting roles so I’m curious and excited to see what it was about Romance Is a Bonus Book that enticed her back to dramas.

Romance Is a Bonus Book is set to premiere in the first half of next year with director Lee Jung-hyo (Life on Mars, The Good Wife) and writer Jung Hyun-jung (Five Enough, Discovery of Romance, I Need Romance series) joining forces for the drama. The duo previously worked together on OnStyle’s Because It’s the First Time and tvN’s I Need Romance 2.

I've never seen her in anything, and I ALREADY love her.

I did not see it either. I have not seen any work from her, but ... she's Jongsuk's favorite actress ... so I already like her. I want so much that it is a resounding success.
But the script already seems attractive (actually I love the scripts that Jongsuk chooses) so I'm already inside.

ya and the only woman to woo Won bin, at the first sight :P

She looks like that girl from fight my way and DOTS

I’ve never seen her in anything, so I can’t really judge, but I really like this PD’s work. I read that Jung Kyung Ho didn’t even read a script for Life on Mars when he accepted the role. He believed the PD picked a good project as they worked together on Heartless City.

I'm interested with this drama because of the PD lol 🤣

i must be old since she is like my first fav korean actress. some of her famous works are Someone Special, Maundy Thursdays with Kang Dong Won, ireland with hyun-bin. so yeah, she's pretty good.

That is big news!
I have only ever seen her in a couple of her old movies. She and Won Bin have kept a low profile for years.
I hope that means Won Bin will also choose a new project soon?

I guess if you're going to keep a low profile for nine years, hiding out with Won Bin is the way to go.

Not a bad gig. Wouldnt mind that too.
I will agree as soon as Won Bin is mentioned!

A Jong-suk noona romance!! With Life on Mars PD and Won Bin's wife!! Also copywriting!! Everything is packaged up very nicely with Jong-suk being the beautiful bow on top. I hope that my man can leave to military service with a final bang!

is it just me that have missed tvNs hallmark rom com? Happy we gonna have one next year. so glad to see a new drama from this writer. I liket her other works :D

I wouldn't say I'm the biggest fan of the writer... I didn't really like the I Need Romance series... but the PD has directed a lot of really great shows (The Good Wife! Heartless City! A Witch's Love! Life on Mars!) so I'm tentatively excited. I've always liked Lee Na-Young. I know she's done rom-coms before but she has sort of a melancholy image, at least for me. It'll be interesting.

Thanks for the casting news, @stroopwafel!

The production catches my eye because of the writer's and PD's track records with FIVE ENOUGH, DISCOVERY OF ROMANCE, and LIFE ON MARS.

Lee Na-young was hilarious in the film SOMEONE SPECIAL (2004) with Jung Jae-young. I watched it about a year and a half ago because I had seen him in the excellent movie WELCOME TO DONGMAKGOL. They are terrific and the story is a hoot, with a film spoof within the movie that should be seen by viewers of ROOM NO. 9. Har! A guy gets diagnosed with lung cancer and learns he only has 3 months to live. He's a pro baseball player who had been a star pitcher in high school, but injured his shoulder and became an outfielder. His girlfriend dumped him earlier the same day he got the bad news. He's alone after his parents were killed in a plane crash, and has never actually been in love. His life looks really dead-end. In despair after the diagnosis, he goes to the neighborhood bar and gets crocked. At closing time, the lady bartender doesn't know where he lives, so she stuffs him into a large box. And hauls him on her back to a motel at closing time. She leaves him there. Turns out she has loved him unrequitedly since the day his mom sent him over in his high school pinstripes with a batch of homemade goodies to welcome the new neighbors. But he never noticed her or even knew her name. Eventually this unlikely pair warm up to each other. This film made me laugh out loud. It has some wonderfully absurd moments. The tone of the lead characters could be described as "quiet desperation," but they seem content to muddle through life. This is not a film about high romance, nor ridiculously beautiful and sexy people. They're normal-looking, and just schlepping through their solitary lives. What a great flick.

Lee Na-young also starred in PLEASE TEACH ME ENGLISH with Jang Hyuk. What a romp! Includes a hilarious scene of teaching a piglet its ABCs (as in the idiom "teaching a pig to sing").

This PD is love! HEARTLESS CITY was my crack drama (2013) and THE GOOD WIFE was one of the better remakes.
Sadly I'm not a fan of Lee Na-young but hoping for a more mature rom.com from PD Lee.

I've only ever seen her in Maundy Thursday with Kang Dong Won and that was soooo many years ago. She's fine but KDW kinda outshined her there?

I would disagree. Her acting shone way more, he almost looked like he was overacting. Her restrained crying was terrific and she looks so gorgeous in motions. She conveyed her angst and sorrow brilliantly.

Jong suk may dancing in the air when hearing this news. Acting with his teenage dream would be a full stock for 2 years in military service. I just hope that they can make it pre-produce so he can completing the drama before enlist and please .. please .. be good drama!

Yaaasss. Nayoung is the love of my life and she is finallyaking a comeback, in a rcom! After having watched all her countless indie efforts it's good to see a good old romcom as Nayoung shines in them. Someone Special, Who R U and Please Teach Me English, she was so charming in all of them. It will be a good shift from her heartbreaking new movie, Beautiful Days. I hope she gains a bit of weight tho, she looks much younger with weight on, I believe she lost her face weight to suit the role of a mother in Beautiful Days.

Lee Jung Hyo PD has been one of my favourite since the Good Wife (the first work i've watched from him) and his romances are always sizzling and full of chemistry that i'm excited to see what sort of chemistry Lee Na Young and Lee Jong Suk could bring. the premise sounds cute kind of similar to the dynamic of the secondary characters from jugglers which is sure to have a lot of hijinks.